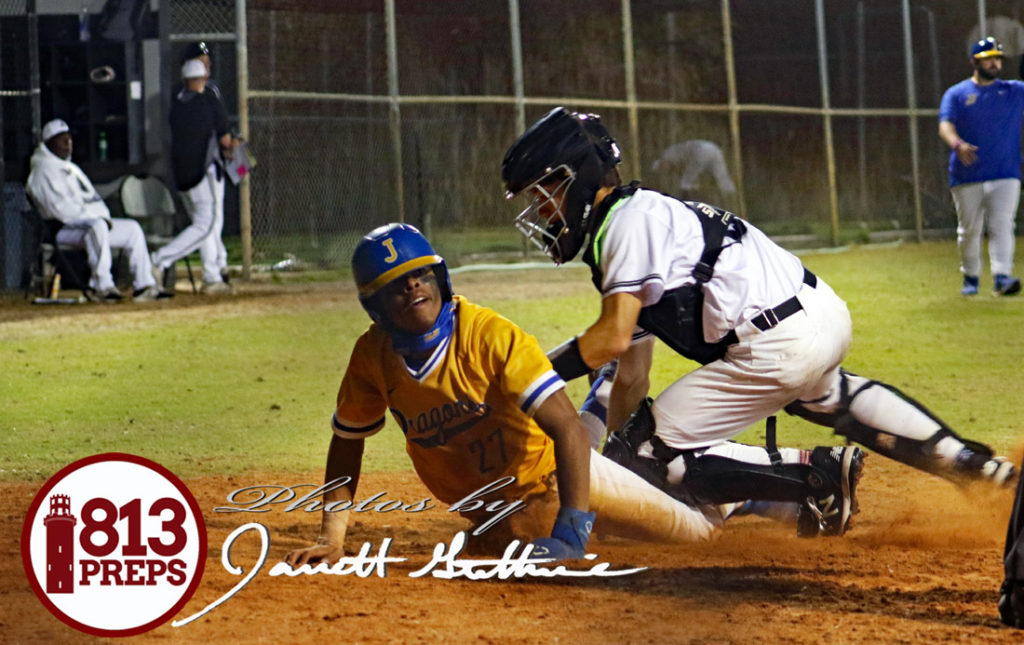 Jefferson senior Javier James slides into the plate scoring for the third time as the Dragons topped Robinson, 7-5.

TAMPA – After Jefferson senior Javier James tucked his second double of the game just over the third base bag to lead off the fifth, aggression took over. He promptly swiped third, and was bouncing down the line during the next at bat, so much so for a split second it looked like a groundball to the Robinson third baseman may have frozen him, but instead the instant the throw went toward first, James sped home sliding across the plate for what at the time seemed an insurance run for the Dragons. That run however, proved the difference as Jefferson held off a late Knights charge and left South Tampa with a 7-5 victory.

“It was just an aggressive mindset to make their players have to make a play,” James said. “As soon as I saw him throw it, I just took off.” 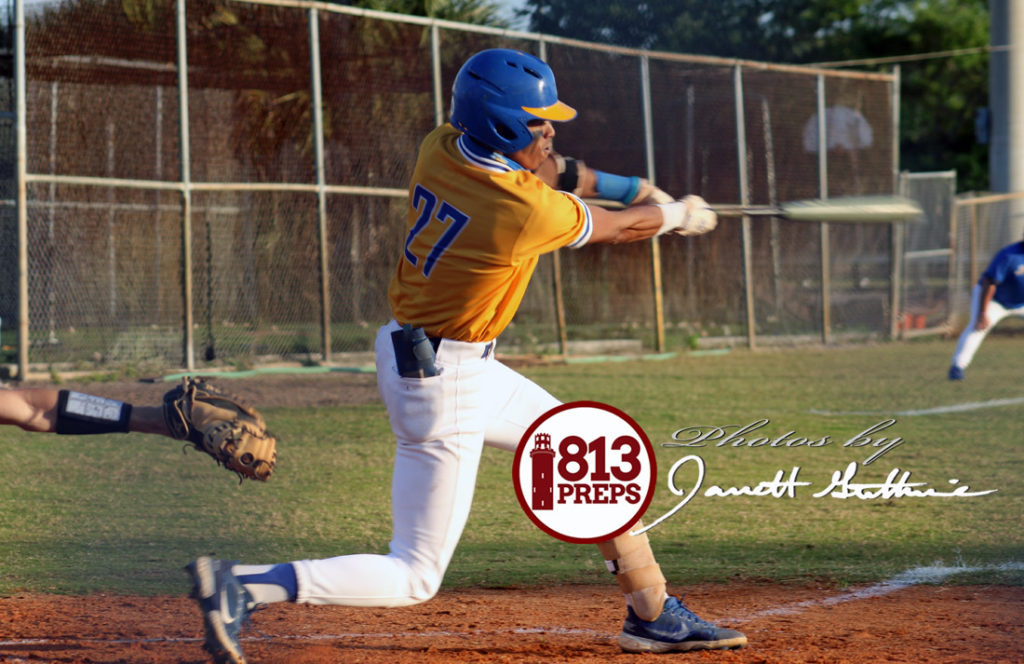 Javier James connects on the first of his three hits in the Dragons win, this one, a single, was followed by two doubles and he scored each time.

Jefferson (6-4) took control quickly with two-out hitting in the first. After Yaidel Perez was hit by a pitch, James, Dylan DeGusipe (RBI), Yadiel Perez (double) and Jayden Vazquez (RBI) followed with hits in succession, and along with a pair of errors from the Knights, the Dragons’ offense started things with a four-run lead.

Robinson (5-7) answered with three straight singles to start the home-half, including a pair driven in off the bat of Cameron Duss (2-for-3, stolen base), and the Knights added another run in the second as Lamont Akins’ RBI hit cashed in Robert Satin (2-for-3). 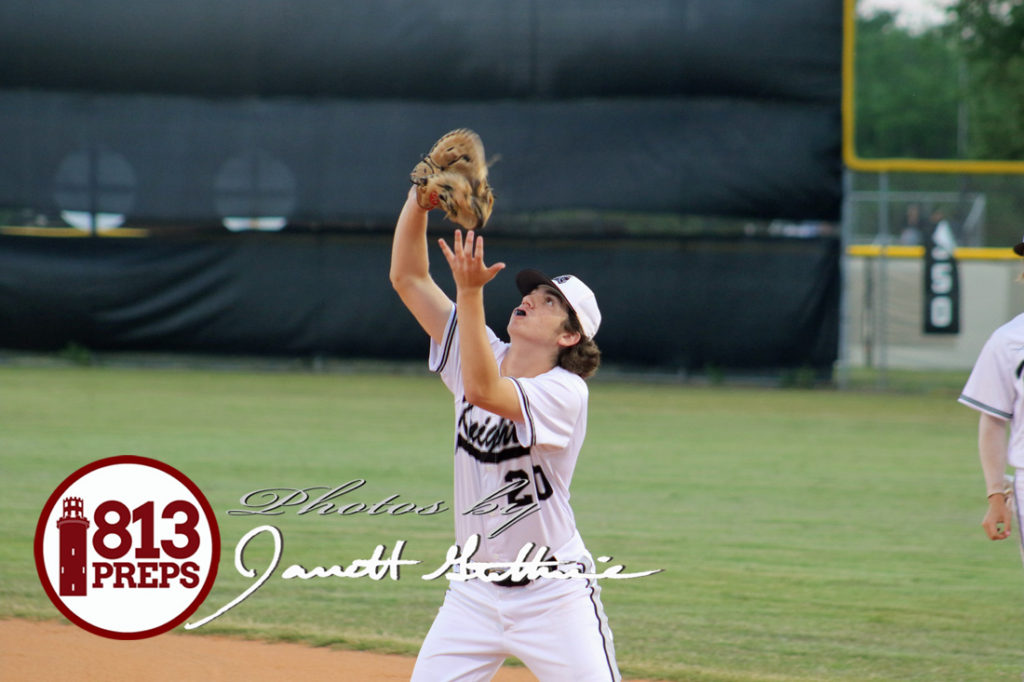 Robinson sophomore first baseman Robert Satin makes a catch in the second inning. Satin went 2-for-3 at the plate and scored a run. 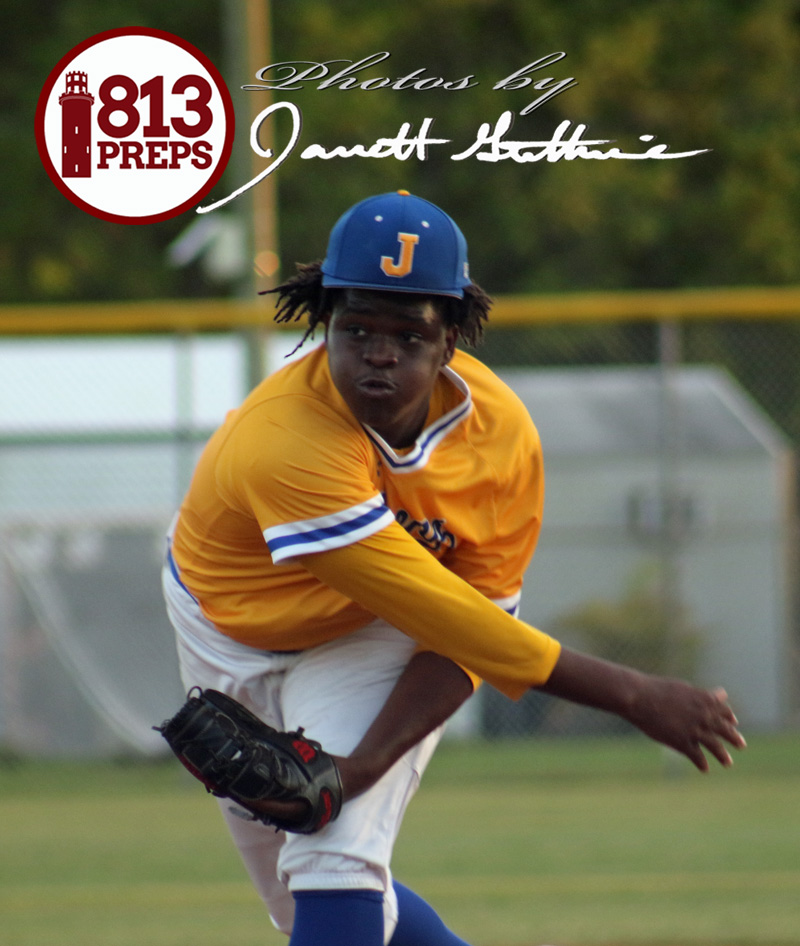 Dragons senior P Carson Moore improved to 4-0 on the season.

But after that Dragons senior Carson Moore settled in on the mound. The 6-foot-2, 230-pound two-sport athlete (also a defensive end on the football team) pitched six innings on the mound and watched as his team kept producing. After the win, pushing Moore to 4-0 on the year, the senior said the impact of James fifth-inning run was not lost on him.

“That fired me up, right there,” Moore said. “That’s just my teammate doing all he can to help us win, so yeah, I liked that.”

The aggressive Dragons struck again in the top of six as Sebastian Lopez singled, stole second and scored from third on a dropped third-strike throw down to first.

The Knights got to Moore a little in the sixth, as Jacob Maskin stepped to the plate with the bases loaded, and slapped a two-run single into center, but the Dragons relay ended the inning at the plate. In total Moore stranded six Knights runners in scoring position in the game.

“You have to show your willpower there,” Moore said. “This team helped me out, so I had to just keep pitching out there for as long as I could.” 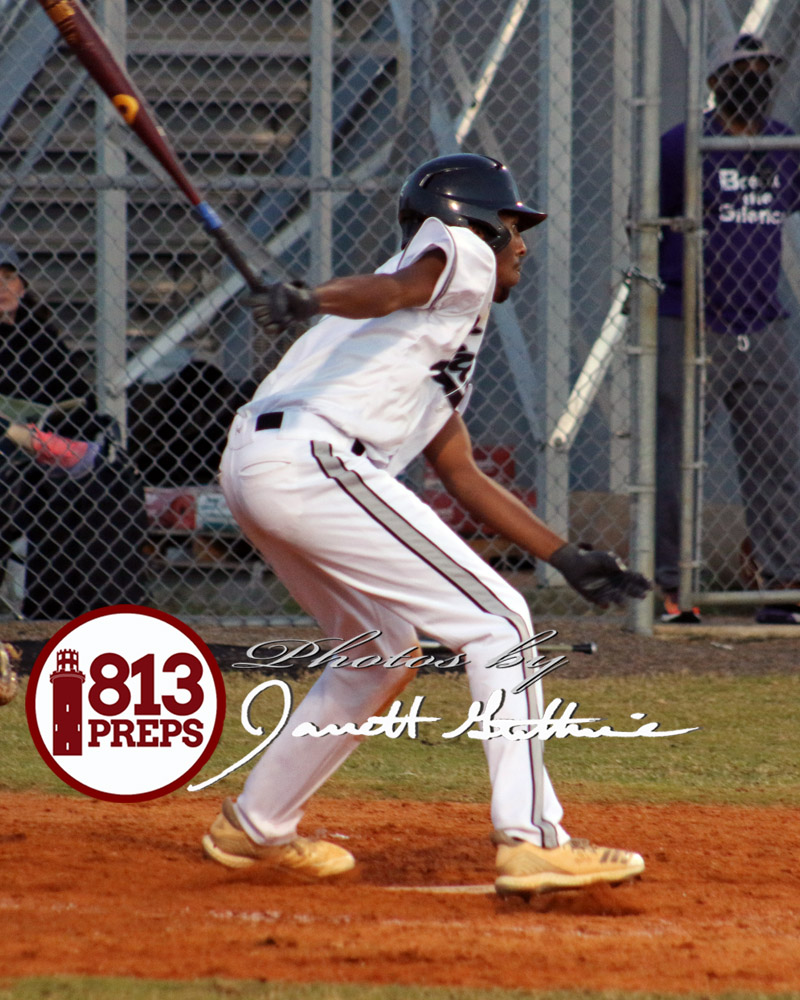 Knights junior Lamont Akins goes the other way with this RBI single in the second inning. Akins went 2-for-4 with a run scored and a stolen base.

Robinson looked poised for a comeback as Tucker Wehrman led off the seventh with a single, when senior Ben Kim torched a ball to the right-center gap leading his teammate to take off. Unfortunately, for Wehrman, Kim and the Knights, Dragons senior Jaiden Duarte put it into overdrive streaking across the outfield for a catch and firing the ball into the infield to double the runner off of first.

After one more Knights single, reliever Matt Johnson ended the game and picked up the save with a strikeout.

“Our team was focused all seven tonight,” James said. “Multiple hits all over the lineup, this was just a great team win.”

For the Knights, Joe Whitaker was 2-for-4, scoring twice, while Malachi Hill and Kevin Blowers each had two hits.