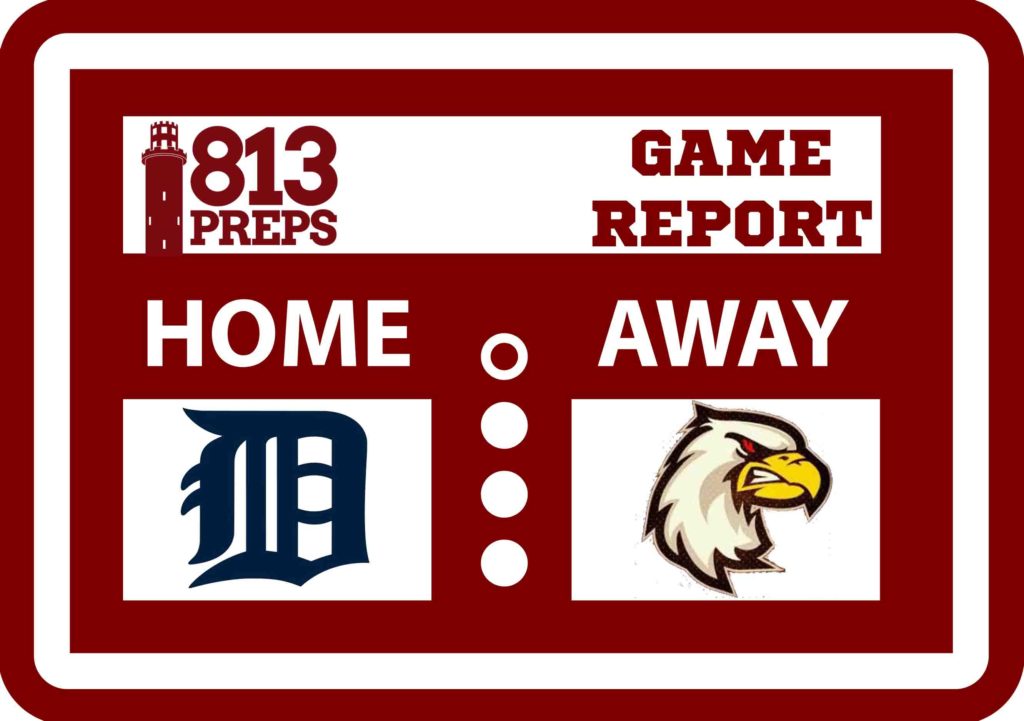 PLANT CITY – Durant right-hander Sean Hermann turned in another dominant performance Tuesday night in a 7-2 victory against Brandon. The senior allowed only one hit in six scoreless innings, striking out 13 batters and walking one.

“He’s fantastic,” Brandon coach John DiBenedetto said. “I mean 91 and 93 and filling it with fodder. It’s tough for anybody, any given night. He doesn’t walk people. The plan was to attack early, and we fought, and we fouled off a ton of pitches. He’s hard to barrel up. Everything is moving really hard.”

The Eagles were down to their final out when Kendal Spencer spoiled the combined shutout, driving in a pair of unearned runs against Ronnie Galletti with a bases-loaded double on a blast to the right-field fence.

“He does not get cheated,” DiBenedetto said. “I was glad he got a shot in a spot to give us a chance. Listen, 7-4, all of a sudden it’s a baseball game if he hits it five feet further.”

Carlos Morales and Dylan LaPointe each had two of the 10 hits for Durant, coming off a loss to Jesuit in the Saladino Tournament Gold Division championship game.

LaPointe drew a walk between a pair of singles and left the rest of the legwork up to courtesy runner Devin Suero, who contributed two of nine stolen bases for the Cougars. Javy Quintana led the charge with three thefts; Austin Sewell had two, and Aidan Welsh and Morales swiped one apiece.

“We like mixing things up, see if we can catch guys off-guard,” said Durant coach Butch Valdes, who felt comfortable clearing his bench of young players.

It was among the game highlights for Hermann, who made it possible.

“We love when those kids get up to bat,” he said. “We just love to cheer them on because that’s their one shot. We love when that happens.”

Durant improved to 10-3 while extending its perfect record at home to eight games with the non-district triumph. Brandon slipped to 5-8.