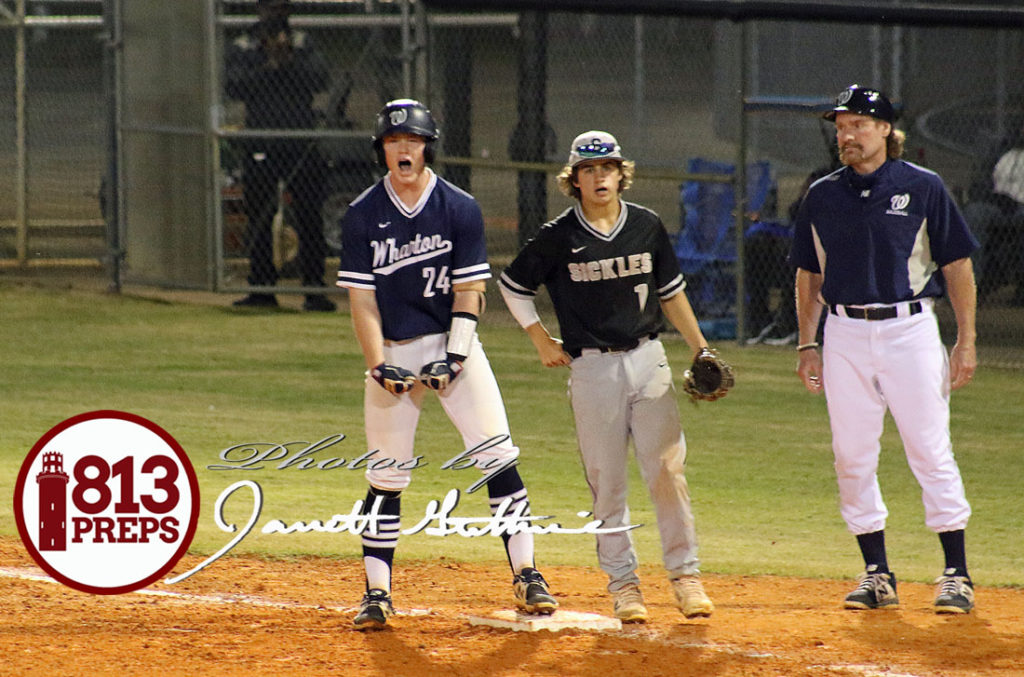 Wharton junior Quentin Meadows celebrates on first after driving in a pair with a single to right.

TAMPA – Through five innings, Wednesday’s district showdown between Sickles and Wharton was every bit the continuation of February 23rd’s evenly matched game that ended in the final inning in a Gryphons win. Another duel of aces, a battle of defense where hits were at a premium, and once a runner reached, belts tightened to the very last notch. 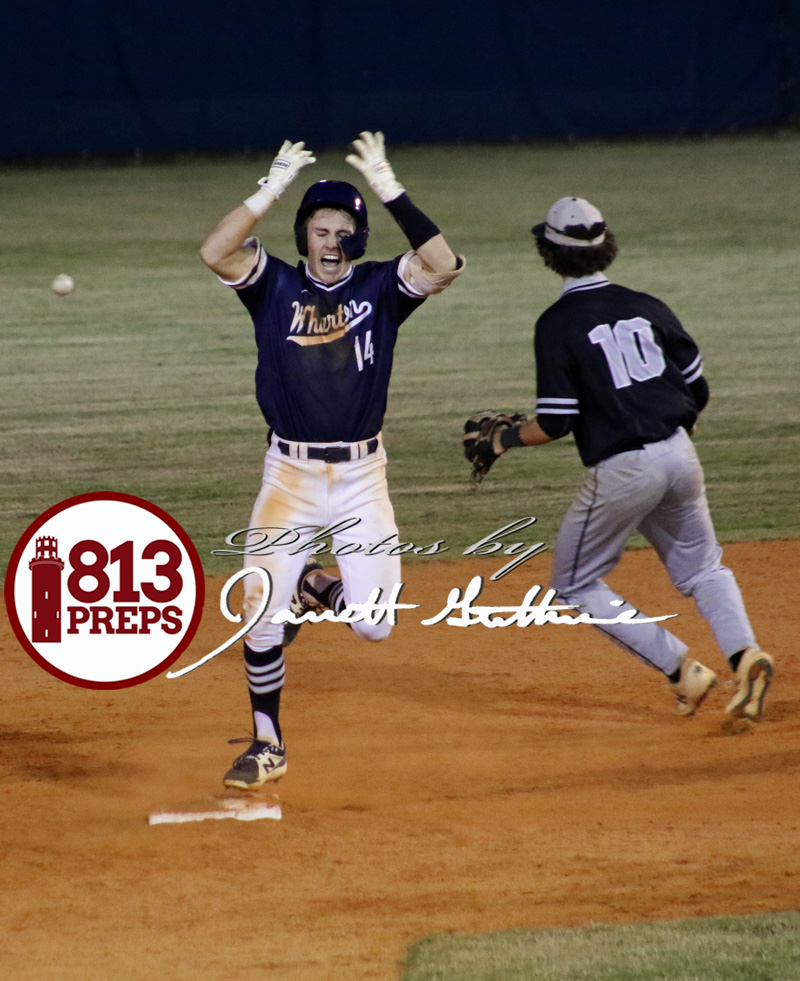 That blink arrived in the home sixth – a slip up, a wicket-splitting error through the five-hole proved all that was needed for Wharton to come away with a season-series evener, as a two-out skipper off the bat of Elijah Dukes wasn’t handled by Gryphons third baseman Avery Bishop allowing Zach Ehrhard’s leadoff double in the frame hurt as the senior scored, and Wharton defended its home field in a 3-0 win.

As things tend to spiral, Wharton (12-3, 3-2 in 7A-7) added two more in the sixth, as a walk and a two-run single to right from Quentin Meadows provided the runs reliever Evan Chrest needed to finish things out and earn his fifth win of the season.

“It’s a real honor that our coaches believe in me enough to put me in those situations,” Chrest said. 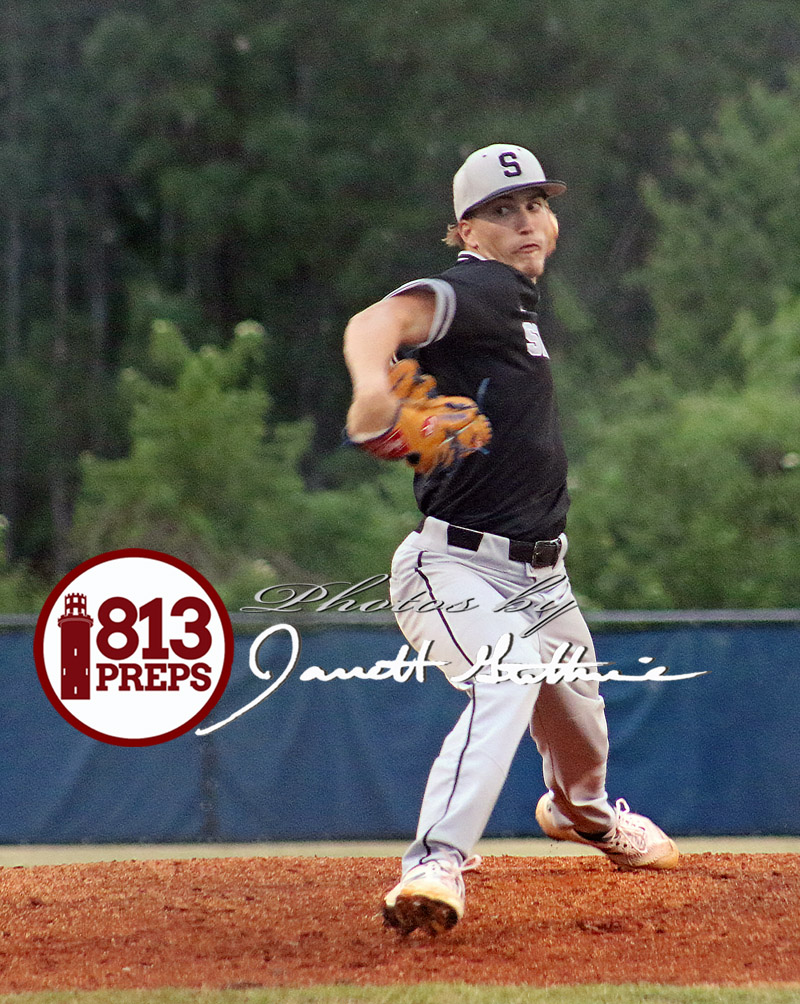 Wade was impressive on the hill for Sickles (9-3, 5-1 in 7A-7) setting a fast pace, frustrating the Wildcats hitters into meeting that pace, and worked in his slider well. He fanned six and limited Wharton to just two hits prior to Ehrhard’s double in the sixth, which chased him from the game.

In counter, Fry worked strongly, deliberately and stoically through the Gryphons lineup. The Miami commit limited Sickles to four hits, while striking out four and playing strong defense off the mound – including initiating a game highlight double-play fielding a bunt, whirling around to fire the ball to second, and then the throw on to first.

“I heard them call, ‘two,’ and I knew it was a bunt right back to me,” Fry said. “I knew I had some time, but I didn’t even think about it, turned and threw right on the money. That was a great play, I was hype.” 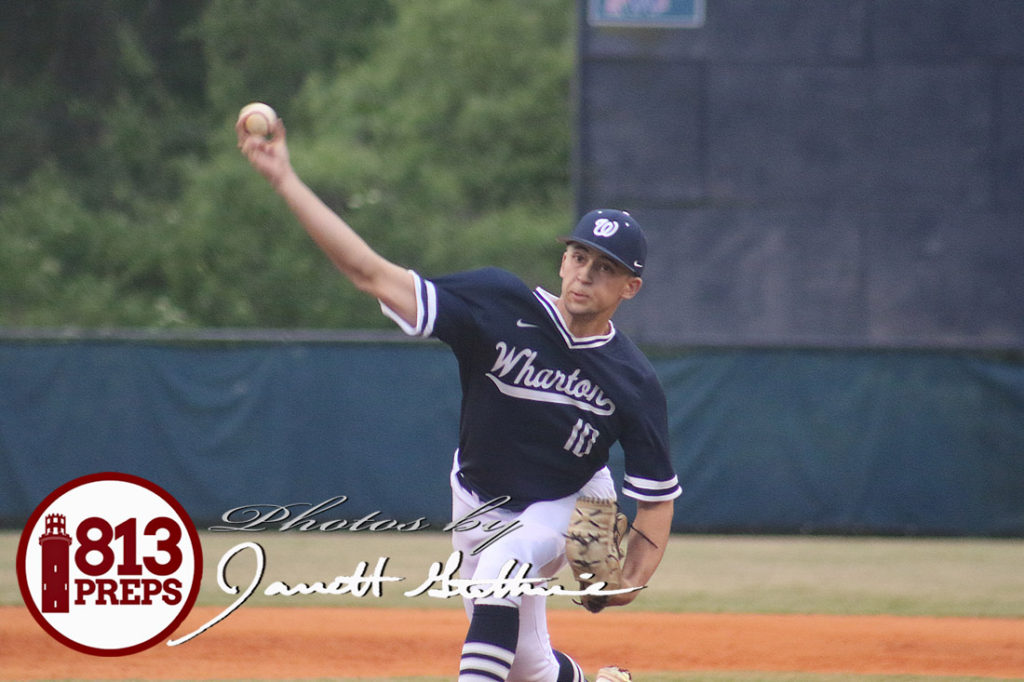 Meadows, who’s two-run single iced the win, said he just had to move on after a very unlucky happening in his previous at-bat. Leading off the fifth the junior sent a liner whizzing by Wade’s head only to have the opposing pitcher catch just a piece of it with his glove, deflecting it right to the shortstop for a lineout.

“That’s never happened, it’s unlucky but you just have to worry about the next chance,” Meadows said. “It’s a little frustrating knowing that you squared one up.”

In that next chance though, Meadows found a bit of deserved luck slapping the two-run single the opposite way.

“The pitcher made some good pitches and I was fouling a few off,” he said. “I knew the curveball was coming last pitch, and I just went with it.” 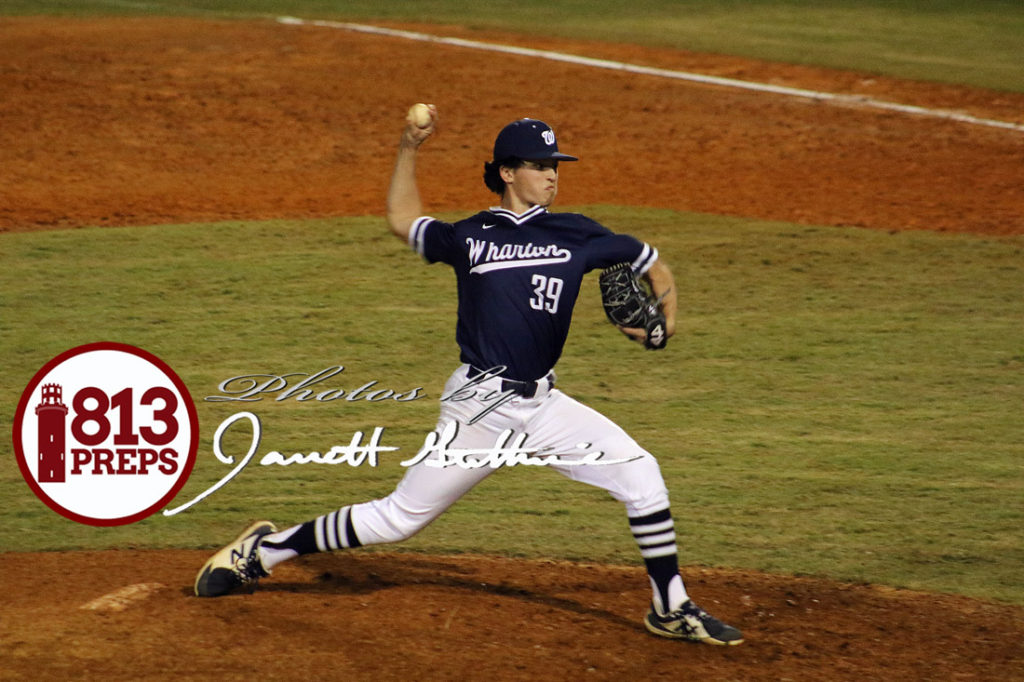 Relieving Fry to start the sixth, Chrest found himself in trouble quickly as Sickles got back-to-back singles from Kohl Robertson and Bishop, and the bases loaded with a walk to Chase Conville. But the junior righty worked out of it with a pair of strikeouts to send his team to the plate for the decisive inning.

“I’m always thinking I’m the man out there and I can get the job done no matter what,” Chrest said. “It didn’t faze me that much.”

Adding with a chuckle: “I think it scared the rest of the team a little bit, but I knew I could get the job done. “

Pinch-hitter Carter Christy had a two-out single in the seventh, followed by a Hayden Yost walk and a balk moving both into scoring position, but Chrest got what he needed – a groundball to short to end the game and improve his record to 5-1. 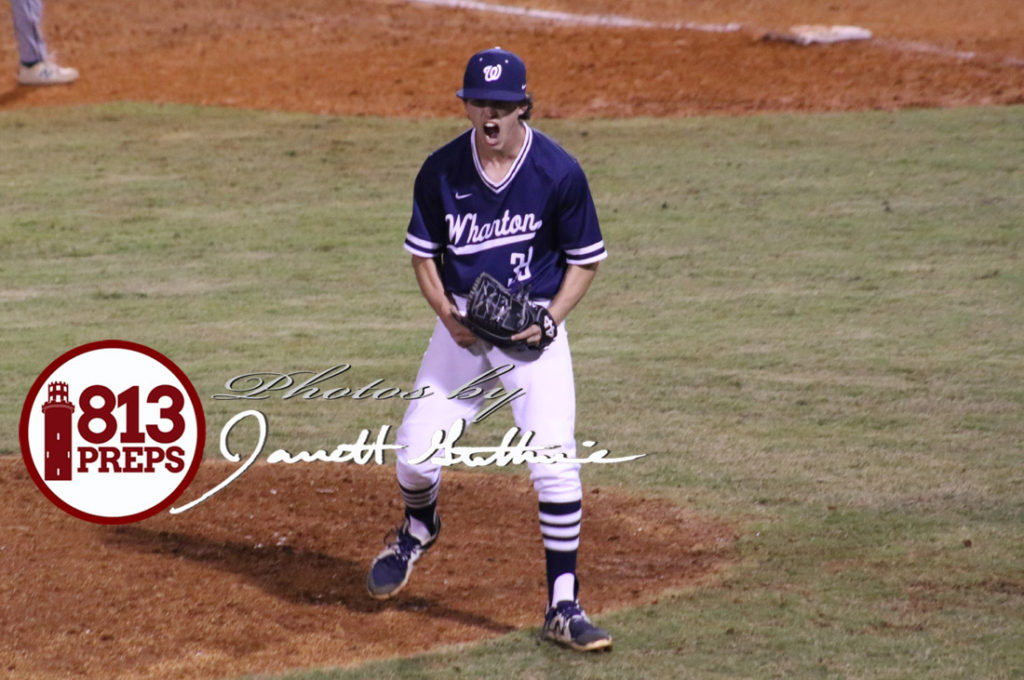 Wharton junior Evan Chrest lets out a yell after striking out a pair and leaving the bases loaded in the sixth.