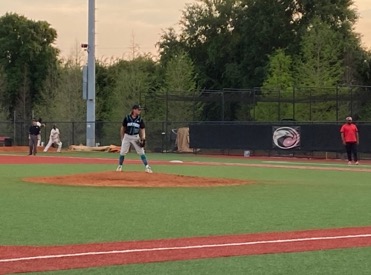 Bell Creek pitcher Tyler Fritsch finished the game with six strikeouts in 5.1 innings pitch, as well as hitting 3-for-4 and three RBI in Friday night’s matchup (photo by Dylan Rudolph).

TAMPA – The mosquitos were in full force Friday night, but the Bell Creek Panthers drew more blood. Five doubles, a triple and 13 total hits — as well as 10 walks — allowed Bell Creek to run away with the Friday night matchup with Carrollwood Day, winning 16-3 at the Wagner Athletic Complex.

The scoring started in the first inning as both teams traded runs.

Carrollwood Day’s Aden Hendels got the scoring started with a triple to left-center field to drive in Andre Rameau before Hendels was thrown out at home plate to keep it a 1-0 game. The Patriots’ lead would be short-lived as Bell Creek answered at the top of the second, using an error and an infield hit to get in scoring position, before Avery Long drove in his team’s first run with a sharp double past first base and into right field.

Bell Creek pitcher Tyler Fritsch initially had solid command to start the game, striking out three of the first six batters he faced, but a second-inning struggle where he walked three-straight batters allowed a single with the bases loaded give CDS (3-10) the lead right back. 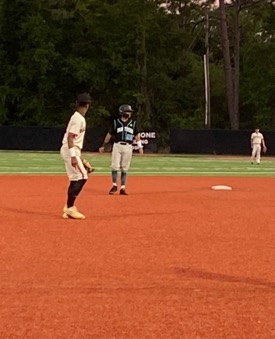 Isaac Martinez on base for the third time in the game. He finished Friday’s contest with Carrollwood Day 2-for-4 with a triple, a walk and two RBI (photo by Dylan Rudolph).

But Bell Creek (6-3) answered again, first with a single from Ryan Long to drive in junior Caleb Rodriguez to tie the game before a sacrifice fly from sophomore Xavier Talbot with the bases loaded gave the Panthers their first lead of the game in the top of the third inning. A lead that they would not give back.

Fritsch eventually regathered himself after his second-inning struggles to finish off an impressive night on the mound, relinquishing just two hits in his outing and finishing the day with six strikeouts, and allowing just the three runs.

“I think (Fritsch) just ran into problems at the bottom of the lineup,” Bell Creek head coach Frank Burke said after the game. “But as long as he works his off-speed and spots his fastballs, he’s a great sophomore, and big things come from him.”

A couple of walks and a hit-by-pitch to load the bases in the top of the fourth inning allowed Bell Creek to expand on its lead. A double by Isaac Martinez on a 1-1 count gave the Panthers a three-run lead before back-to-back singles from Fritsch and first baseman Frank Burke Jr., as well as a double from Talbot, made it a 9-2 game in a blink.

“Some of the sophomore, juniors stepping up was huge,” Dante Portillo, Bell Creek’s lone senior, said. “I have a different love for every single one of them, so I have all the faith in them even against tougher teams. I just trust in them.”

Extra insurance runs in the final three innings — a single from Rodriguez, a double from Fritsch, his third hit of the night, and a slew of walks with bases loaded in the seventh — put the game well out of reach. Carrollwood Day did get a run back, a single from Christian Clarke to drive in Jaxon Garvey in the bottom of the sixth, but it was nowhere near enough to match Bell Creek’s offensive onslaught.

“We try to stay positive all the time no matter what,” Portillo said. “No matter what happens, even if we’re going down, we just always have to play our game.”

It will be a busy schedule for both teams next week. For the Patriots, they are still looking for their first win streak of the season. They’ll have a chance with two matchups next week, the first on Tuesday against IMG Academy Blue. Bell Creek will have three matchups starting Monday against Gulf Coast HEAT. With the meat of the schedule on the horizon, Coach Burke said the key to keeping the winning ways is not to get too lethargic.

“If it was a couple years ago when I had all seniors and juniors, I would say this is just typical,” he said. “But with this young team, you have to be on them every day and make sure they’re looking forward to improving every single day.”