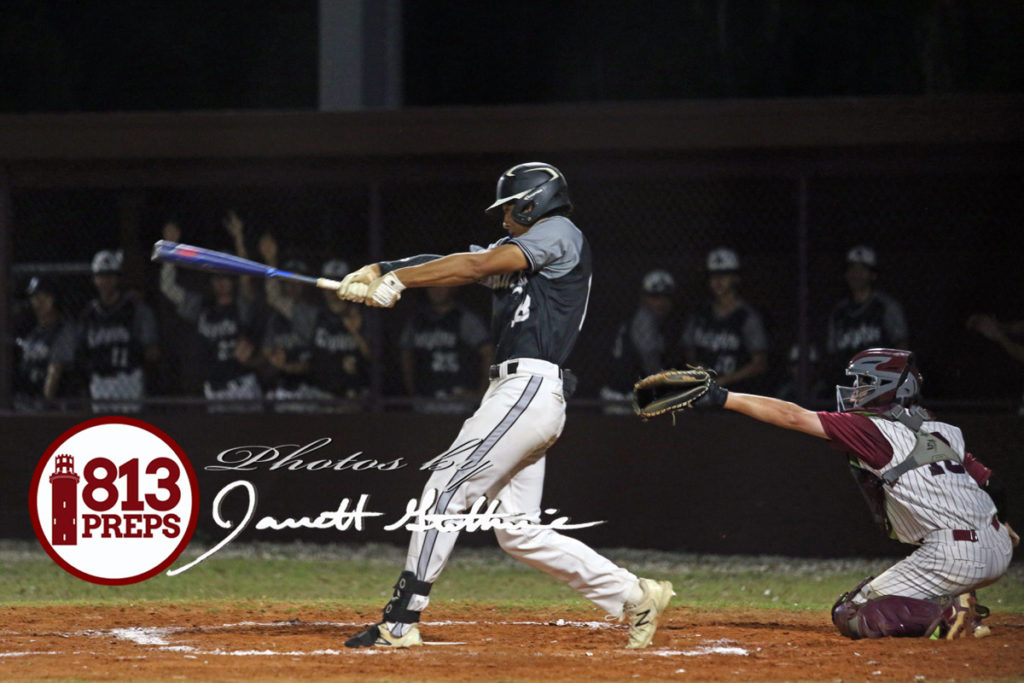 Robinson sophomore Jeremiah Henderson cleared the bases with this three-run triple keying a five-run inning for the Knights.

BRANDON – Robinson needed a big inning. The Knights have been mired in a bit of a funk lately, going 2-4 since the start of the Saladino Tournament, but according to head coach Alex Barron he’s been impressed by his team during the patch, staying confident that things would eventually break their way.

That resolve found tangible results in a big way as Robinson sophomore Jeremiah Henderson belted a line drive to center and sped around the diamond, clearing the bases as he went for a three-run triple, highlighting a decisive inning in the Knights 5-2 victory.

“The biggest thing that has helped me keep my head up and keep my fire,” Barron said, “is these guys have not once said anything less than we are in this, this is our season; I like our at-bats, I like what we can do on the mound. The fact that I haven’t had to force these guys to stay up, they’re doing it on their own – that’s special to me.”

After three scoreless frames, it was a one-out error in the fourth that allowed things to build for Robinson (6-8), before Robert Satin’s RBI single plated the game’s first run. Two hitters later, Henderson fouled off a pair, then sent a high fastball screaming to the gap in right-center scoring Lamont Akins, Satin and speed-up runner Alex Warner.

“I was just hoping it would drop and then I saw him reach and it go past him,” Henderson said. “I was super-excited after that.” 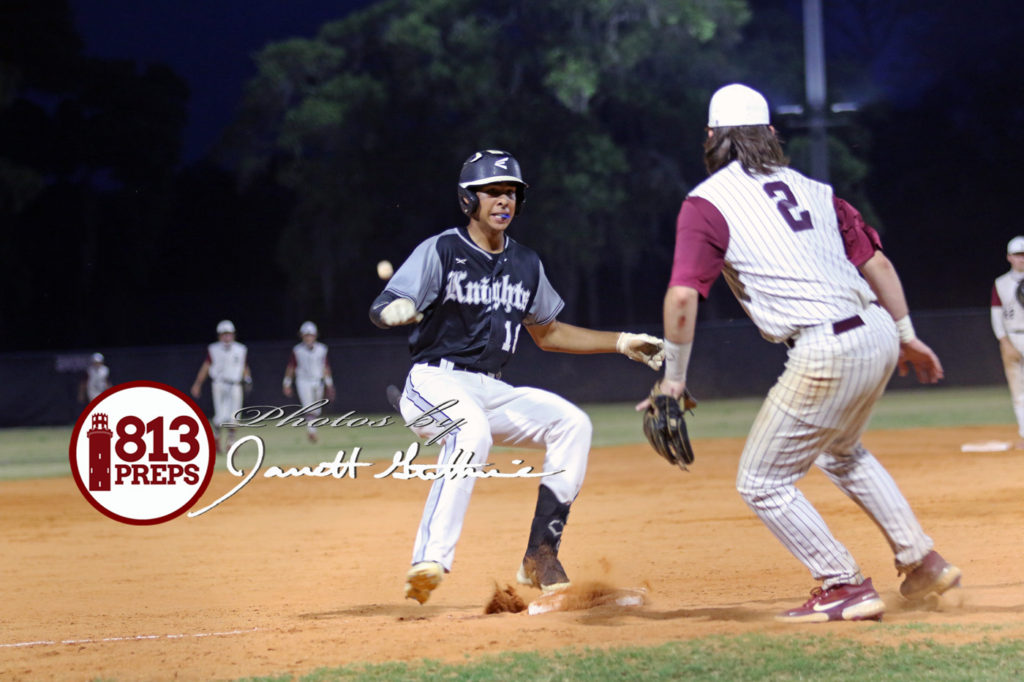 Into third on a standup triple is Robinson’s Jeremiah Henderson.

Henderson would add the fifth run a few pitches later, scoring on a wild pitch.

“It’s huge to finally capitalize on the chances given,” Barron said. “We’ve handed out so many opportunities and nobody has been doing that for us, so to finally get the opportunity and come through with a balanced approach at the plate … this could be a huge momentum shifter for us.

“It’s amazing for our guys to experience that outburst, so they now know if we stick with the process, that big inning will come for us.”

Things took a sour turn unfortunately at this point as the home plate umpire ruled a pitch in the final at-bat of the top of the fourth was high and inside, warning Brandon starter Marcos Herrand, who was tagged with the five unearned runs. The warning, which seemed odd given the timing of the game, and the fact that Herrand finished off his seventh strikeout a few pitches later.

The warning compounded a bit further the next inning as two Brandon players were hit, sparking a bit of a rally, as two run-scoring balks followed allowing the Eagles to get back into the game. The home-fourth scoring for the Eagles was setup by a double off the bat of Josh Blake, who scored his team’s first run. 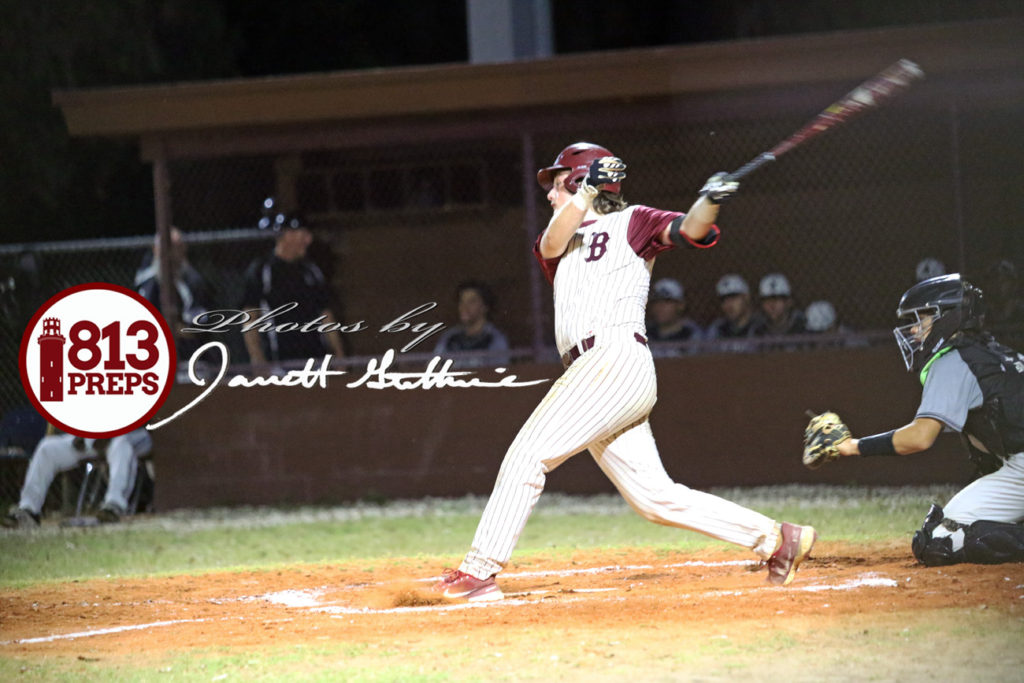 Brandon’s Josh Blake doubles on a liner to centerfield in the fourth.

Herrand found himself ejected an inning later after two quick outs (including his eighth strikeout) as the umpire ruled a pitch up-and-in as targeting the Knights hitter, while the ball actually hit off the player’s bat. 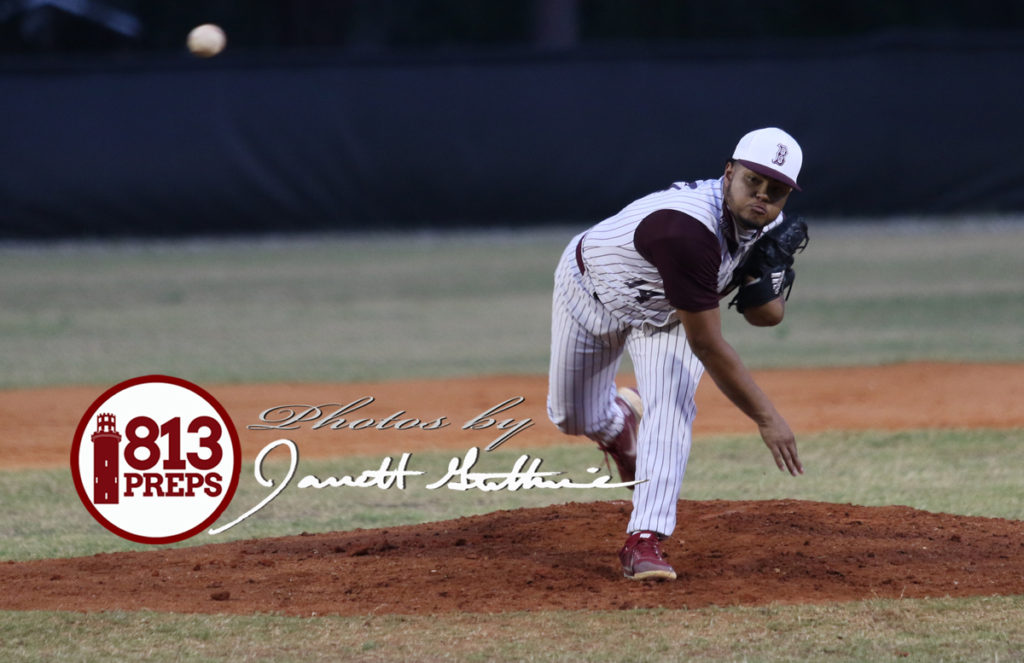 Herrand, who hit no one in the game was ejected, while the Knights hit two batters after the warning, which should have gone to both teams [Editor’s note: this is in no way a statement saying that either of team was trying to hit anyone, but in fact a statement showing that the umpire’s decision seemed arbitrary and improper].

A parent was also ejected, though the umpire was not specific of the person’s identity, responding to the question, “which one?” with, “(it) doesn’t matter.”

Despite the umpire’s ruling, the game featured some excellent pitching.

Robinson junior Owen Brown pitched six strong innings, allowing just four hits and striking out six, improving the lefty to 3-2. Brown said after the win, his offense’s big inning pushed him in his next three innings knowing he had a bit of a lead to work with.

“I feel amazing going back out there with a good cushion,” Brown said. “I’m a confident pitcher, but having that to fall back on is a great thing to have.

“(Jeremiah) was fighting off everything in that at-bat and I was so hyped when he got that one, he’s been smashing the ball, but that one was a long time coming, finding that gap.” 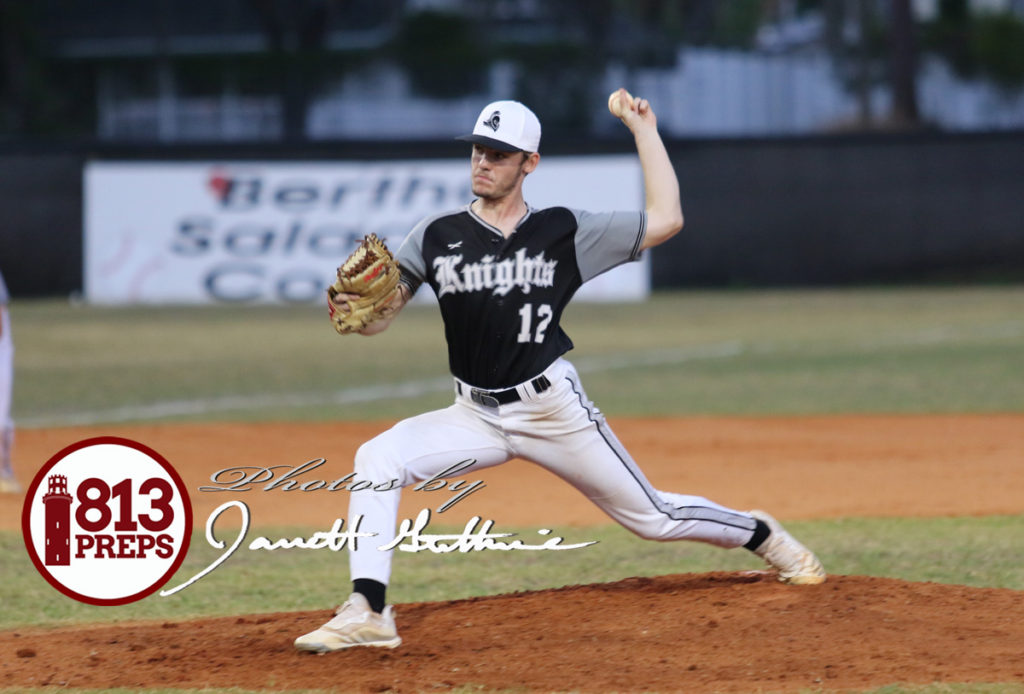 Robinson junior Owen Brown moves to 3-2 on the season behind six innings of work, striking out six and allowing two runs.

After Herrand was sent off, senior Tres Toledo finished the final 2 1/3 innings not allowing a base runner.

While Knights senior David Sandefer earned the save, battling in the final half-inning, allowing the bases to load but keeping Brandon from closing the gap. Sandefer finished with a pair of strikeouts, notching his third save of the year.

Brandon (6-10) got a tremendous diving catch for the final out of the third as senior Kendal Spencer charged in a leapt for a snag, while Eagles shortstop Daniel Santana also showed off some nice leather in the loss.