Alonso gets by Plant in big-game atmosphere 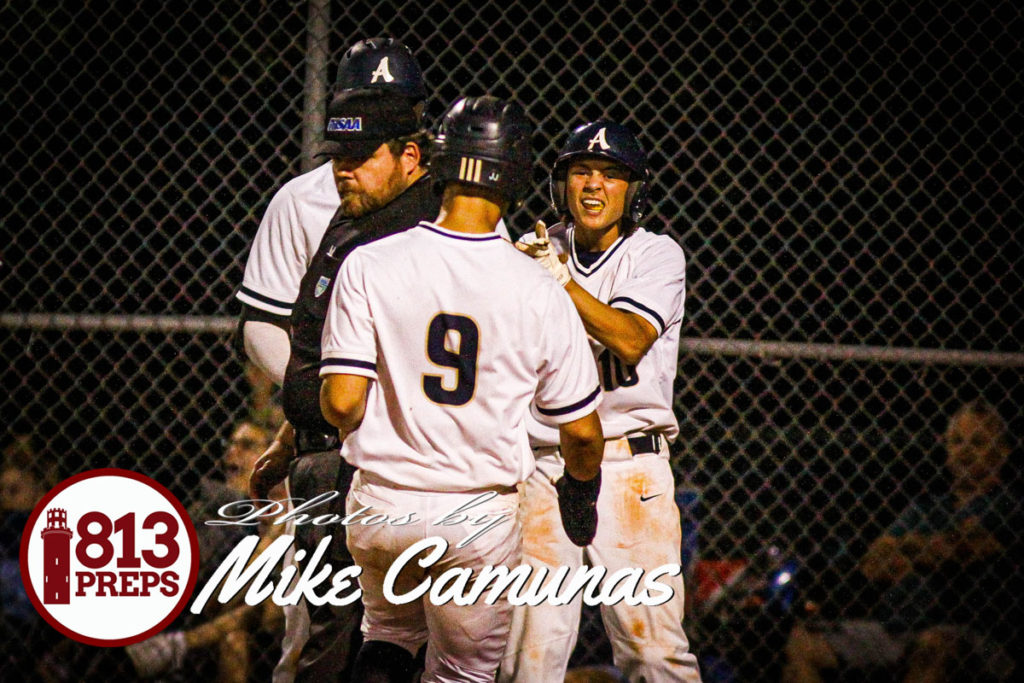 Alonso’s Austin Kirsch celebrates as Christian Del Campo crossed the plate after him when Keenan Rutledge drove them in as the game-tying and go-ahead runs in the Ravens’ 5-4 win over Plant on Tuesday evening (photo by Mike Camunas).

TOWN N’ COUNTRY — Is it the playoffs yet?

Because it sure felt like it when Class 7A-7 foes, Alonso and Plant, met Tuesday evening for a knock-down, drag-out, hard-fought, never-say-never, that’s-why-they-play-the-game and any-other-overused-sports-cliche-you-can-think-of game that had the real feel of a district tournament bout.

“It did, didn’t it?” Alonso sophomore shortstop Chris Morgan mused. “It was a big district game and it was good to move to 4-2 in the district.”

Indeed, the Ravens pulled out a classic, come-from-behind win only to barley edge the Panthers in a back-and-forth 5-4 battle.

“Yeah, it was a bit of a slow start for us,” Raven coach Landy Faedo said, “but they kept their composure as young guys and really came through.”

Postgame interview with #alonso #ravens coach Landry Faedo in which he talks about his team’s resilience after getting down early to Plant but then came back to win 5-4. @813Preps pic.twitter.com/z8BDPo9s8S

It was just that Alonso didn’t come out the gates firing, so much as Plant senior outfielder Jac Caglianone has been on such a tear as far back as the Saladino Tournament. Caglianone’s bat stayed red-hot as he opened the game with a two-run bomb to give the Panthers a quick lead off Ravens starter Hector Montilla (4ip, three earned, on three hits, a walk, with four strikeouts).

“That guy is a really good hitter,” Faedo said without hesitation. 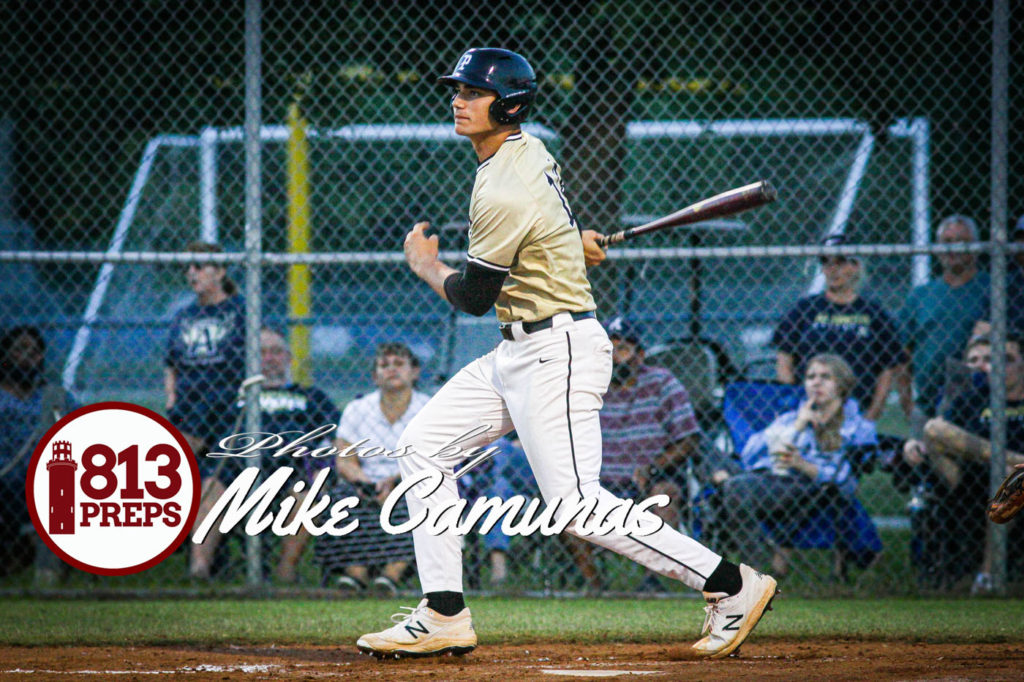 Plant outfielder Jac Caglianone went 3-for-3 with a free pass in his fourth at bat in the Panther’s 5-4 loss to Alonso on Tuesday evening. Caglianone opened the game with a two-run bomb in the first, then had a double in the third and a single in the fifth, leaving him a triple away from the cycle before being intentionally put on base in the seventh (photo by Mike Camunas).

Well, Faedo was incredibly accurate as Caglianone was the game’s hottest hitter going — (checks notes) — 3-for-3 with a double in the third and then a single in the fifth. When he strode up for his fourth plate appearance representing the tying run (and a triple away from the cycle), Caglianone received the Barry Bonds-treatment and was awarded first base, free of charge. 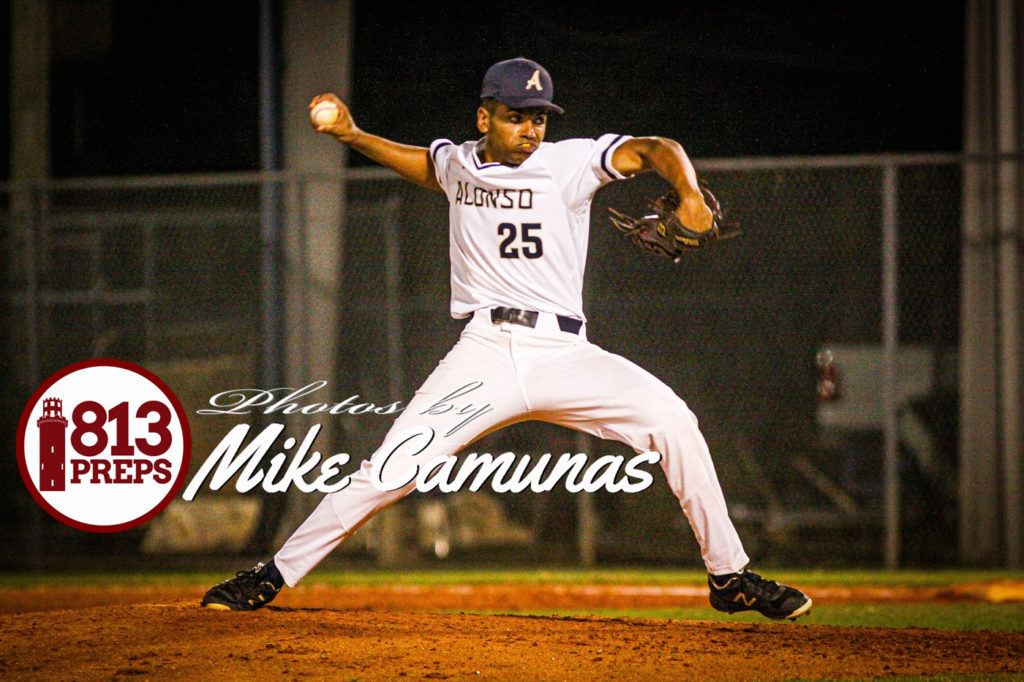 Pitcher Sammy Seplowe threw three innings in relief and allowed just a run and a walk, struck out three and allowed three hits in route to picking up the save in the Ravens’ 5-4 win over Plant on Tuesday evening (photo by Mike Camunas).

But the Ravens were able to hang on thanks to Sammy Seplowe, who pitched three innings in relief and picked up the save. As the hard throwing righty allowed an RBI single to Bryce Pelleriti with two outs that made it 5-4, Seplowe would induce a hard liner to Morgan, who would snag it for a web gem and secure the win.

“(That catch) was unbelievable,” said Ravens sophomore catcher Keenan Rutledge, who was the first to mob Morgan in the post-game celebration, “but this was a big district game and a big win.”

Postgame interview with #Alonso #Ravens catcher @krutledge_2023 following the 5-4 win over Plant in which the sophomore drove in the game-tying AND go-ahead run @813Preps pic.twitter.com/6fkFrSK0Fa

In fact, Rutledge is as big a hero as Morgan, in that the former drove in the game-tying and go-ahead runs in the fourth, scoring Austin Kirsch and Christian Del Campo, respectively. Roberto Rivera added a crucial insurance run in the sixth with an RBI single that scored Carson Vega. 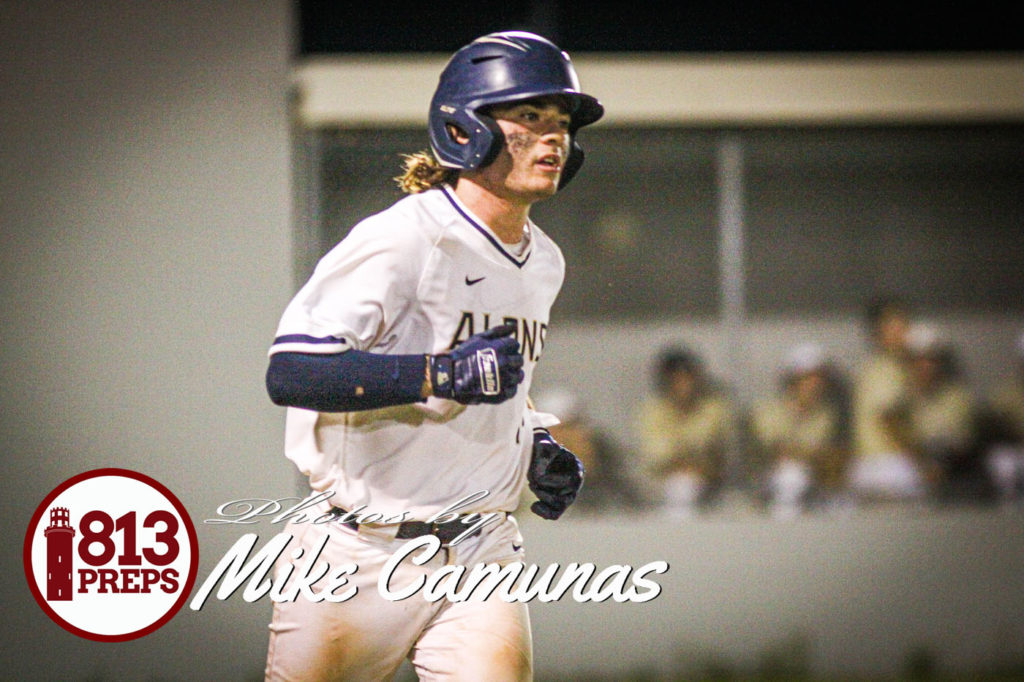 Alonso sophomore catcher Keenan Rutledge went 2-for-4 in the Ravens’ 5-4 win over Plant on Tuesday evening, including driving in the game-tying and go-ahead runs in the fourth (photo by Mike Camunas).

In the first, Alonso got one right back on Plant as Morgan drew a walk, stole a base and then made it to third and then home on wild pitches from Tephen Montgomery. Plant would add another on a sac fly, while Alonso added its second on another wild pitch later on.

“We started off down, but we worked our way back into it,” Morgan said, “with great defense and clutch hitting, thanks to Keenan Rutledge over there, and we were able to get back into (the game). We didn’t come out the gate as strong as we should have, but we made it out (of the game) strong.”

Postgame interview with #Alonso #Ravens SS Chris Morgan who had a #SCTop10 #WebGem to secure the 5-4 win over Plant. @813Preps pic.twitter.com/0kCpVug4AE