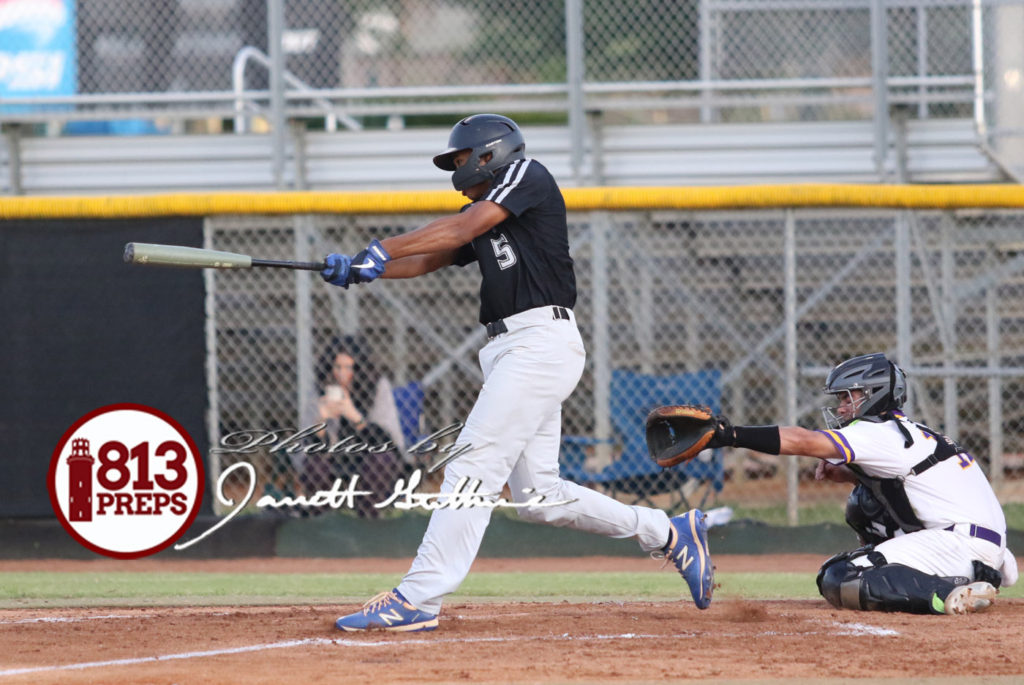 Riverview junior John Smith went 2-for-4 with a triple, a grand slam and an RBI ground out setting the pace for the Sharks offense, which put away Lennard in six innings.

RUSKIN – Riverview’s John Smith made his first start from the leadoff spot, and though his first at-bat Wednesday night – a rollover groundout to third – won’t notch the memory bank his next three chances, culminating in a sixth-inning grand slam smashed over the fence in left, made it a momentous start for the junior.

Leading off the fourth inning, Smith barreled a ball to right-center and charged around the bases so fast he ended up rolling and sprawled on his back atop the third base bag. Though the triple for the first hit of the game, didn’t result in a run. It did start things moving in the Sharks favor, and once moving they took off as Riverview bested Lennard, 10-0 in six innings.

Hey guys, remember when I said John Smith was getting his first nod in the leadoff. GRAND SALAMI!!! 10-0 pic.twitter.com/Kk5u1QKs7R

Senior Kipp Kochera led off the fifth with a single, followed by hits from Adrian Rolon and Fisher Weeks, setting up a beautifully deadened squeeze bunt from Gavin Hunter to bring across the deciding run.

.@gavinhunter_ drops down the squeeze bunt with one out, gets the RBI and no one covers first making it 1-0 Sharks. pic.twitter.com/vpWIeXShKr

Riverview (8-8, 2-2 in Class 7A-8) added five more in the frame, with an RBI groundout from Smith, run-scoring singles by Caden Santucci and Farah Castillo, and capped by a two-run double from Nolan Lalond, which gives the senior 10 RBI this week after his three-homer night against Blake on Tuesday. 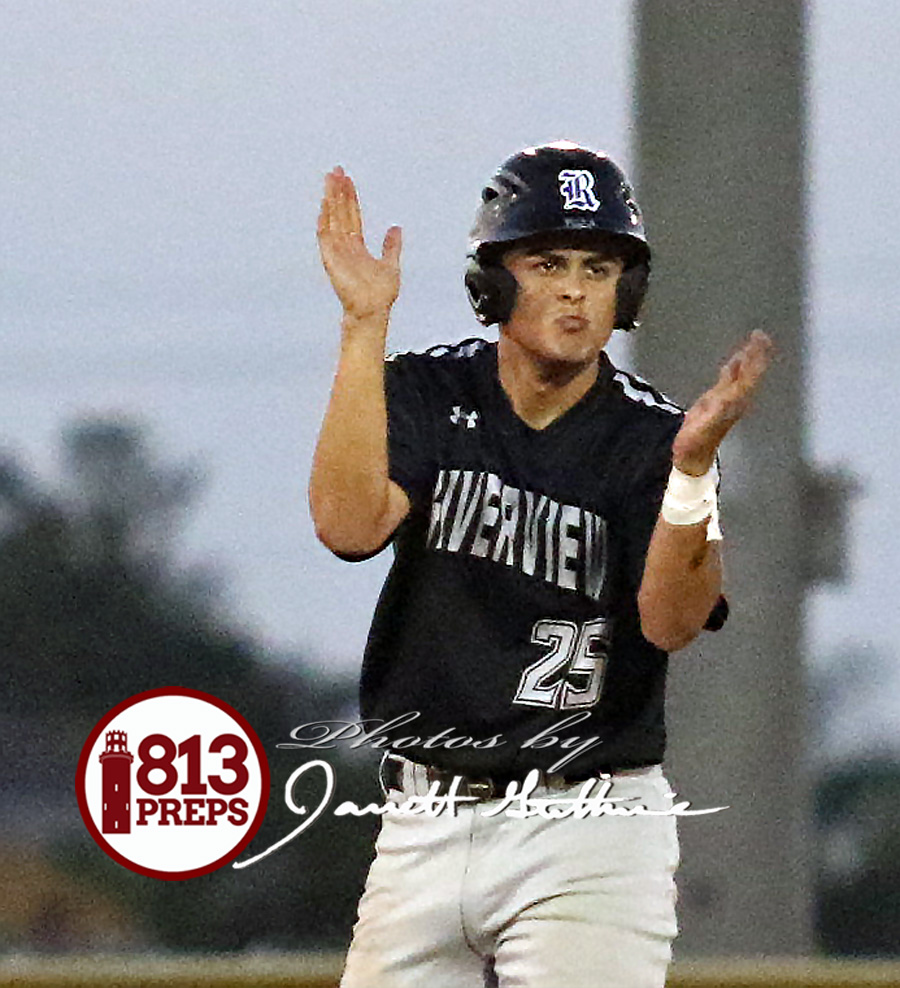 “Nolan has been a huge factor for this team,” Sharks starting pitcher Nathan Hook said, “his bat, his fielding – all year – just a great player.”

The support was all that was needed for the junior righty Hook, who allowed just two, fifth-inning singles and one hit batter to reach base.

With a slight adjustment to the pitching rotation this week, Sharks head coach Jason Smith said he wasn’t quite sure when to work in Hook this week, but said his pitcher solved that problem for him with a late-afternoon text on Tuesday.

“Nate’s kind of quiet, so when he came out and texted that, I had no doubt he was ready.” 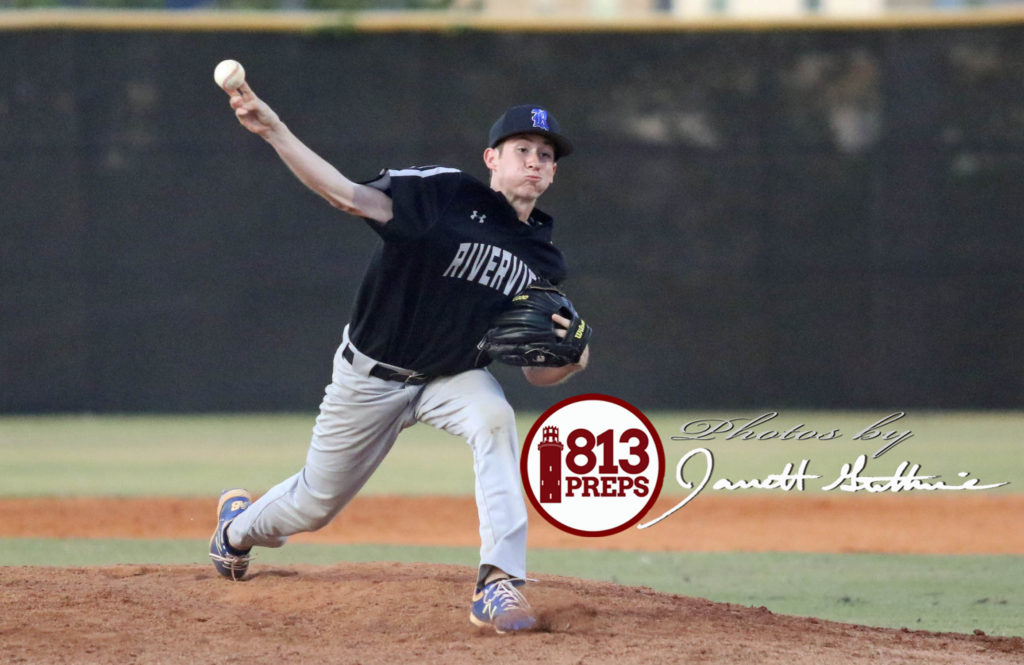 Ready he was, as Hook retired the first 13 that stepped to the plate, and though he faced some adversity with the base loaded in the fifth, he battled through it with a strikeout to end it, finishing with five K’s in his six-inning, complete-game.

“We busted it wide-open there,” Hook said. “It brings a whole different game out of me.”

The game was abbreviated by a frame as the Sharks loaded them up in the sixth and John Smith cleaned them off with his second homer of the season.

“He probably has the best hands of any high school kid I’ve seen in a long time,” Jason Smith said of his player John Smith (no relation). “That was nothing abnormal for John, he was just taking his normal swing and trying to put a ball in play.” 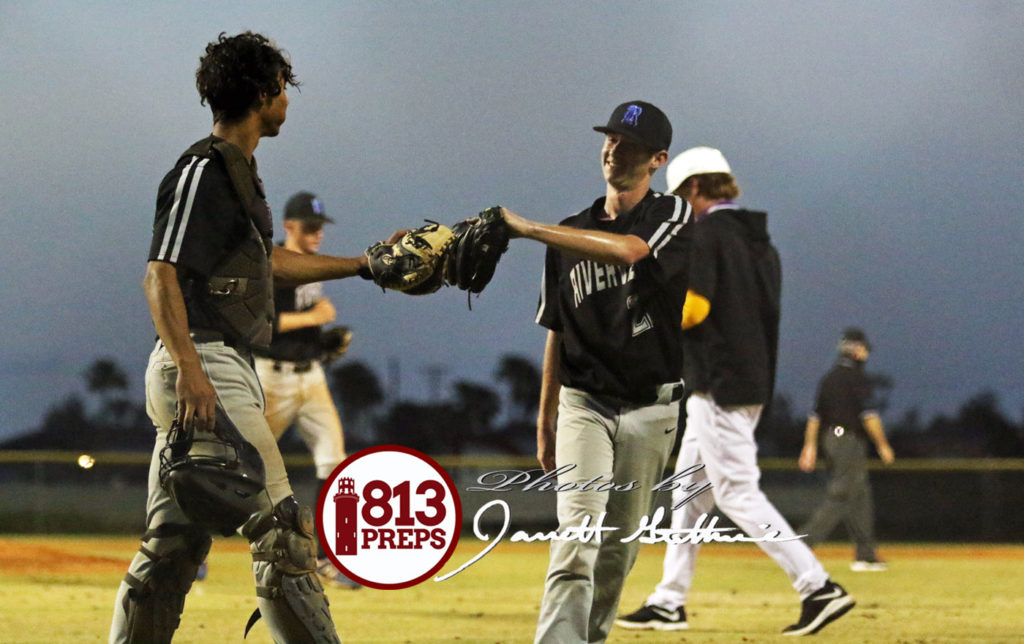 The Sharks battery of C Gavin Hunter and P Nathan Hook meetup after the righty left the bases loaded with a strikeout in the fifth.

Asked after the game, if the earlier triple and the big lead for his team changed his approach a bit, John Smith confidently and somewhat subdued, responded, “No.”

Adding: “I was just trying to put it in play. I knew if I get ahold of one it could go out any time. I was really just trying for a base-hit.”

“John-John is dangerous,” Hook said. “He’s going to put the ball in play and prove what he can do to you.”

For Lennard (4-6, 0-2 in 7A-8), sophomore Carter Payne was cruising, retiring the first nine he faced and after Smith’s triple in the fourth tightened his belt, retiring three straight including a pair of strikeouts. Even after the six-run production from his opponents, Payne showed composure, and came back out for the sixth, being pulled after a strikeout (his eighth) and a walk. 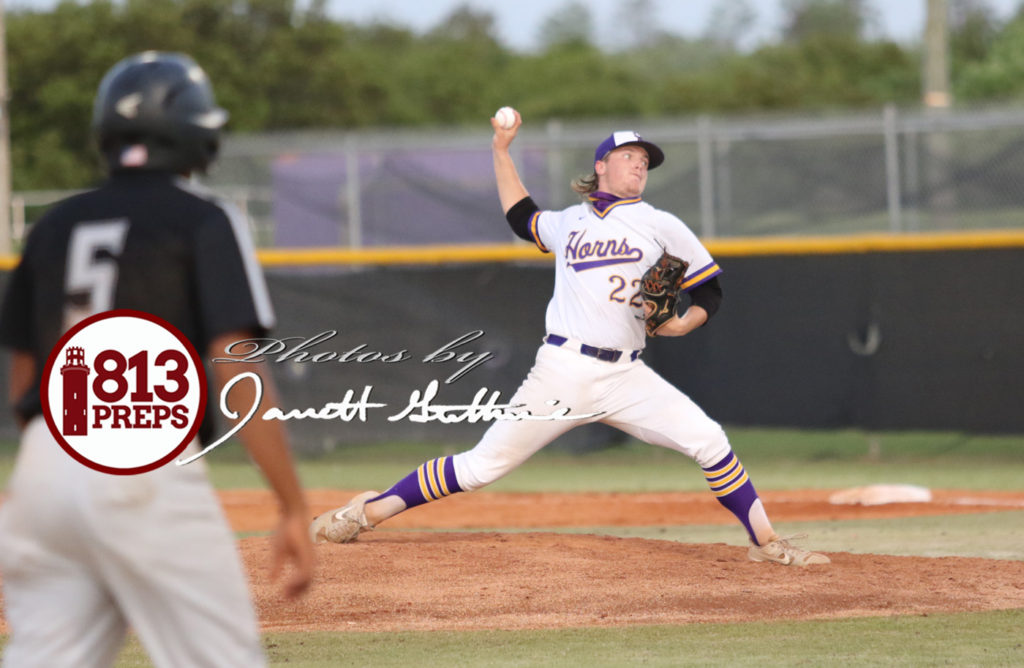 Lennard sophomore Carter Payne cruised early, before running into some struggles in the fifth, but had eight strikeouts in the loss.

The Longhorns lone offense came from back-to-back singles in the fifth from Keith McClain and Joseph Rivera, but neither of those hits or a plunked batter managed to drag a foot across the plate.