TAMPA – Cambridge Christian utilityman Jett Rydell has seen time on the mound for the Lancers this season, primarily limited to a handful of relief appearances. But according to Lancers head coach Stephen Piercefield since spring break, the coach has noticed a huge uptick in his junior’s work.

“Coming out of spring break, Jett was one of the guys who has really started to separate himself,” Piercefield said. “He’s put in the work without us really having to say anything, and let his actions take over.

“He put himself in the position for an opportunity and when he got that opportunity, he went out and produced fantastically.”

That earned opportunity – the starting nod on the mound for the first time in his varsity career Tuesday night – resulted in Rydell tossing a five-inning no-hitter as Cambridge Christian defeated Canterbury, 11-0. 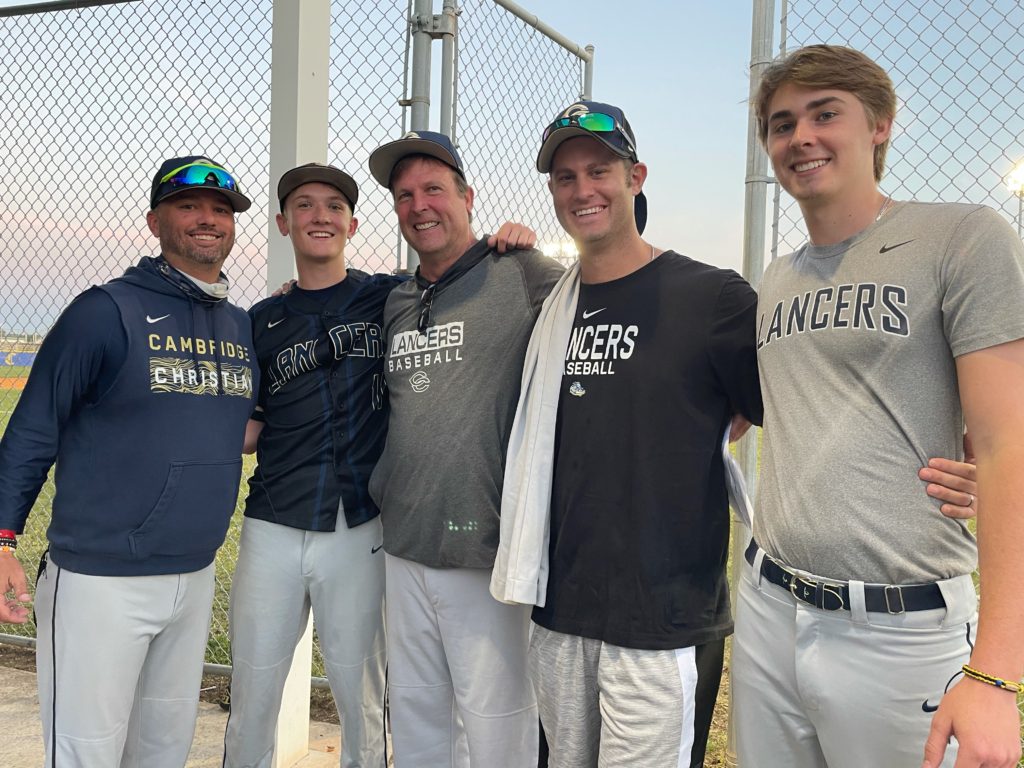 “In warmups I felt really good, I thought my off-speed stuff was working well, I knew I had the guys behind me and I definitely didn’t do this all one my own,” Rydell said. “After the third inning, I had a good inning and struck out two and forced some weak contact for the third out and that’s when you start thinking maybe this could happen.”

Tuesday night wasn’t just Rydell’s first start on the mound at the high school level – it was his first pitching start ever.

The first-ever mound start was even news to his head coach.

“I had no idea that was the first one at any level,” Piecefield said. “Wow. I’m so happy for him and all the hard work he’s put in.”

In the win, Rydell struck out seven and was spotted some significant support from his offense, which scored five runs in the first and six in the second. The big lead he said, put him at ease and allowed him to have fun, but said there was still a bit of pressure throughout.

“Most of the time, when I’ve come into games it’s been much closer,” Rydell said. “Now, I started out with a five-run cushion, so I definitely didn’t want to mess that up for your guys. And yes, there is some pressure after the third inning, it wouldn’t be the end of the world to lose (a no-hitter), but getting that far and having the runs, you definitely are motivated to finish it off.”

The outing wasn’t entirely free from strife as a trio of walks loaded the bases in the fourth inning, but Rydell worked himself out of the jam and finished off the final two innings.

“It’s an amazing feeling, first of all because my guys were able to put up 11 (runs) and get us out of there in five,” Rydell said, “but a no-hitter is pretty cool, at any level.”

Andrew DiMisa, Berkeley Prep (Staff Pick POTW) – The Bucs senior went 6-for-9, with a double and a grand slam last week, driving in 10, scoring four times and stealing a base in wins over Stone Rock Christian (Ga.) and Tampa Prep.

Zander Fisk, Durant – The Cougars senior came on in relief and delivered three no-hit innings in Tuesday’s win over Crest, and followed it up with a complete-game, one-hit, eight-K shutout at Lennard on Thursday.

Bryan Rivera, Leto – The sophomore righty tossed a complete-game no-hitter to lead the Falcons to a district win over Armwood last Monday, in a game where he struck out seven.

James Strom, Steinbrenner – The Warriors senior belted a pair of home runs last week, going 4-for-6, and drove in seven – upping his team lead to four homers and 15 RBI on the season.