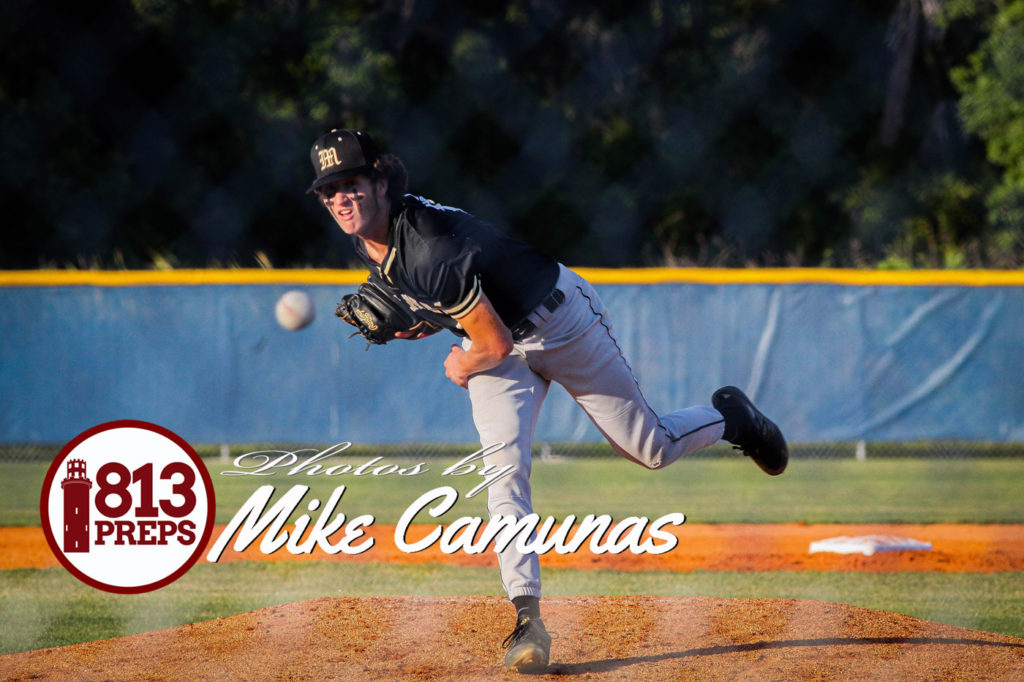 Sadly, it wasn’t a real playoff game. Certainly one that would and could never happen, yet the Buccaneers found out what a stop on the roadmap to the state tournament in Fort Myers will look and be like when the time comes.

“It’s still baseball, right?” said Berkeley coach Richie Warren, a state champion player himself (2000) and head coach (2014). “There’s guy’s in our class (3A) that can play the way they did and throw the guys they threw.”

Warren was referring to facing Mitchell (14-5) and ultimately falling 4-3 to the Mustangs who are THREE WHOLE classes higher than the Buccaneers (15-3). Berkeley being a private school allows them to book more than just Hillsborough County teams, and Mitchell is a Pasco County powerhouse that has produced slews of Division I players and MLB prospects that have made it to The Show. Just as the Bucs have state championship aspirations of their own, being ranked sixth in 3A and 23rd in the state, Mitchell does as well with its own high rankings: 13th in 6A and 60th in the state.

However, it wasn’t that Berkeley Prep just couldn’t pull off its comeback attempt — the Bucs had their chances, even right down to its last at-bat. 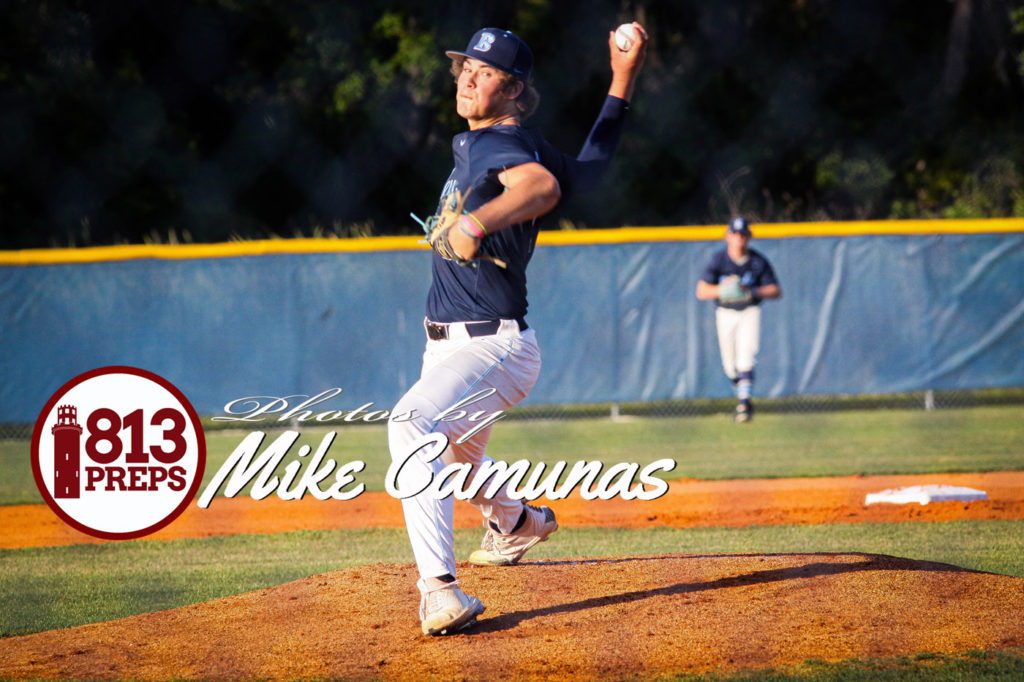 Berkeley Prep senior starting pitcher JT Quinn pitched five innings in the Bucs’ 4-3 loss to Mitchell, in which Quinn struck out three, but gave up a three-run homer in the fourth inning on Thursday evening (photo by Mike Camunas).

Firstly, starter JT Quinn was cruising, as he had done all season, but then Mitchell finally got to him as the righty allowed his first runs of the season: a three-run blast by James Hill, who took Quinn deep after the latter tried to pull off a rare 1-6-3 double play after snagging a comebacker from Jace Trautner. Quinn, uncharacteristically, sailed the throw over shortstop Cade Kurland at second base.

“This was the first adversity he’s faced all season, so it’s good that he goes through it with seven games left,” Warren said. “It’s a growth moment for him and better for him to have it in the regular season than later on.”

Seemingly, the Buccaneers were not phased. Certainly not RBI machine, Kurland, who would respond with a homer of his own: a two-run shot to left field in the fifth that scored Julius Pfau. 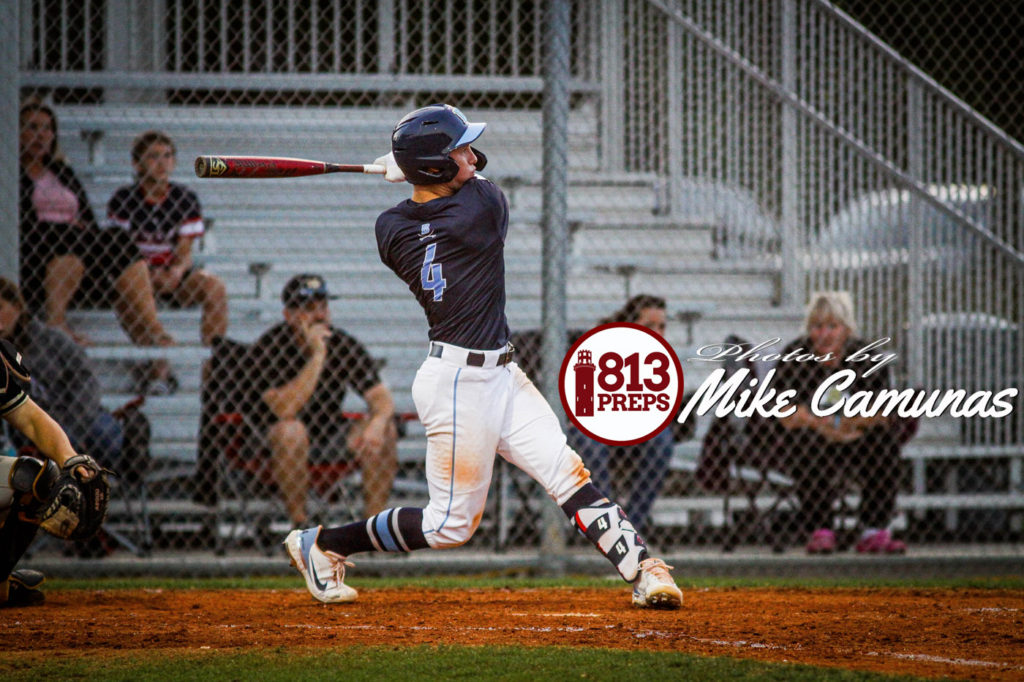 Berkeley Prep shortstop Cade Kurland hits a two-run blast in the fifth inning of the Bucs’ 4-3 loss to Mitchell on Thursday evening (photo by Mike Camunas).

“Even when it wasn’t our best night,” senior captain and third baseman Johnathan Bruno said, “we still hung in there and played to the last out, as we should, but it showed we can play with anyone.”

As the Bucs would turn to reliever Owen McElfatrick, Mitchell was able to tack on an insurance run off the hard-throwing junior and it would set the stage for the Bucs comeback attempt in the seventh down 4-2.

Anthony Castillo and Andrew DiMisa would both walk and it was the clean-up hitter, Bruno, and his team-high .453 batting average, that would come through and drive home Castillo with a single.

“It’s baseball, though, you know?” Bruno relented after the game. “It’s a tough loss, so we just have to move on to the next (Friday night vs. Carrollwood Day).” 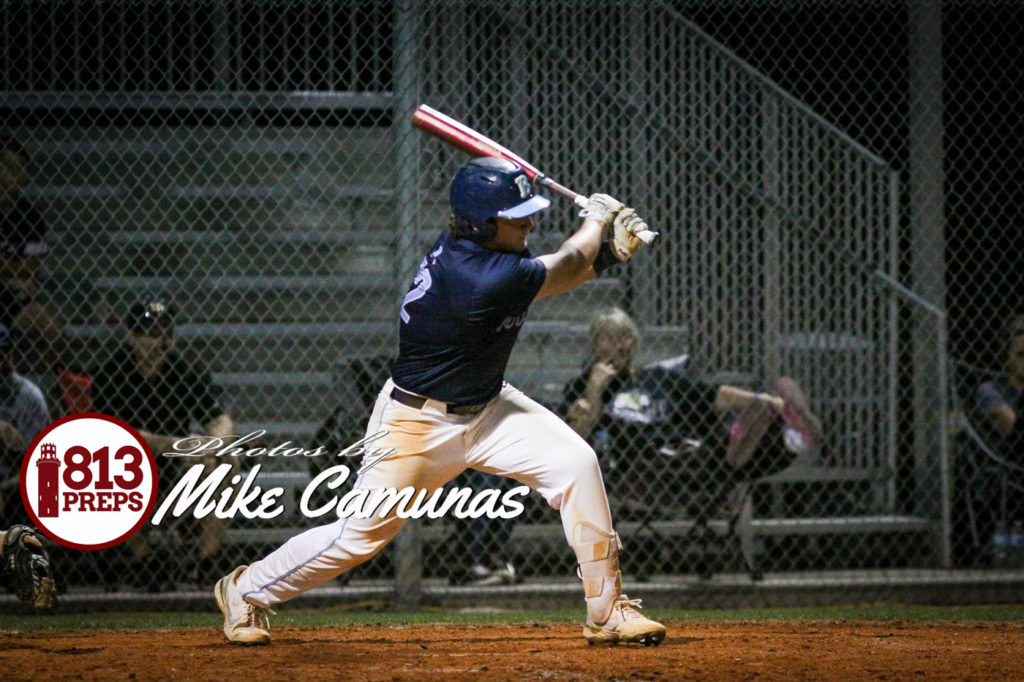 Berkeley Prep senior captain and third baseman Johnathan Bruno drove in a RBI in the seventh to pull the Bucs within a run of tying Mitchell in their 4-3 loss to the Mustangs on Thursday evening (photo by Mike Camunas).

Although Troy Reader would draw a two-out walk to load the bases, Gunnett Carlson, who had two walks and a hit in the game, would end up striking out to end the game.

And while Warren would definitely like to see a cleaner game from his team — a season-high four errors for a team with a .964 fielding percentage including 14 double plays — he feels the same as his senior captain.

“There we are,” he added, “with the bases loaded and the winning run on the plate versus one of the best guys in the state, so we had a chance and anyone would be happy to have had that chance.”