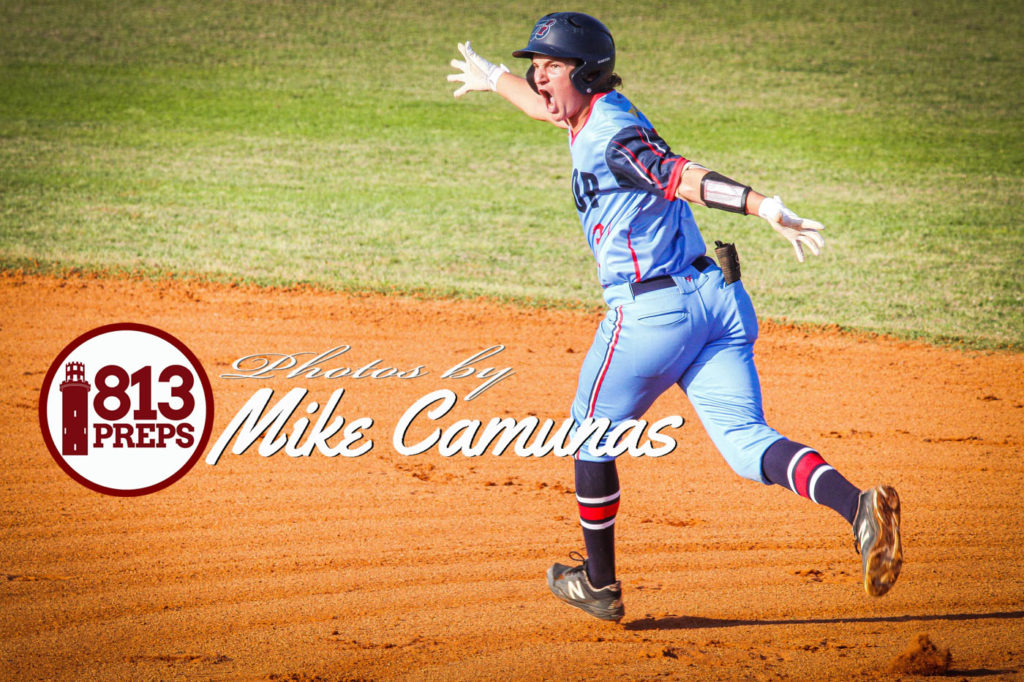 Bishop McLaughlin junior first baseman Drew Knight celebrates after blasting a solo homer on the first pitch of the second inning in the Hurricanes 4-2 win over Tampa Catholic in 10 innings on Tuesday night (photo by Mike Camunas).

TAMPA — Let’s do a head count.

Will all those who expected Tuesday evening’s holy rematch between the clashing Catholic cadres to go 10 innings please raise your hands.

Okay. That’s two for not expecting a three-hour-15-minute game. Anyone else?

“No way,” said game hero, Bishop’s Johnny DiBenedetto, who had two RBI on Tuesday. “I expected a blowout (by us) — all the way.”

While DiBenedetto’s confidence is commendable, the Hurricanes and Crusaders battled for 10 innings, with Bishop McLaughlin coming out on top 4-2 to sweep the season series with the Crusaders after Bishop won 5-2 back on Feb. 18.

“We won early in the season at home, so they came into this game with a meaning,” said Knight, who had a solo home run blast on the first pitch of the second inning. “They came out charging, but we came out with the win and that’s all that matters.”

“I figured this game would be intense,” Eskew added, “because it was their Senior Night and it’s kind of a rivalry for us, but it was a hard-fought game and win.”

Knight’s homer opened the scoring, but Tampa Catholic (8-8) would match that thanks to a sac fly by Josh Batteese, which would score Vincent Docobo. The Crusaders would take the lead in the third thanks to a manufactured run by Tyler Whitfield. The senior outfielder would single with one out, steal second and third and then score on a Brian Canasi sac fly. 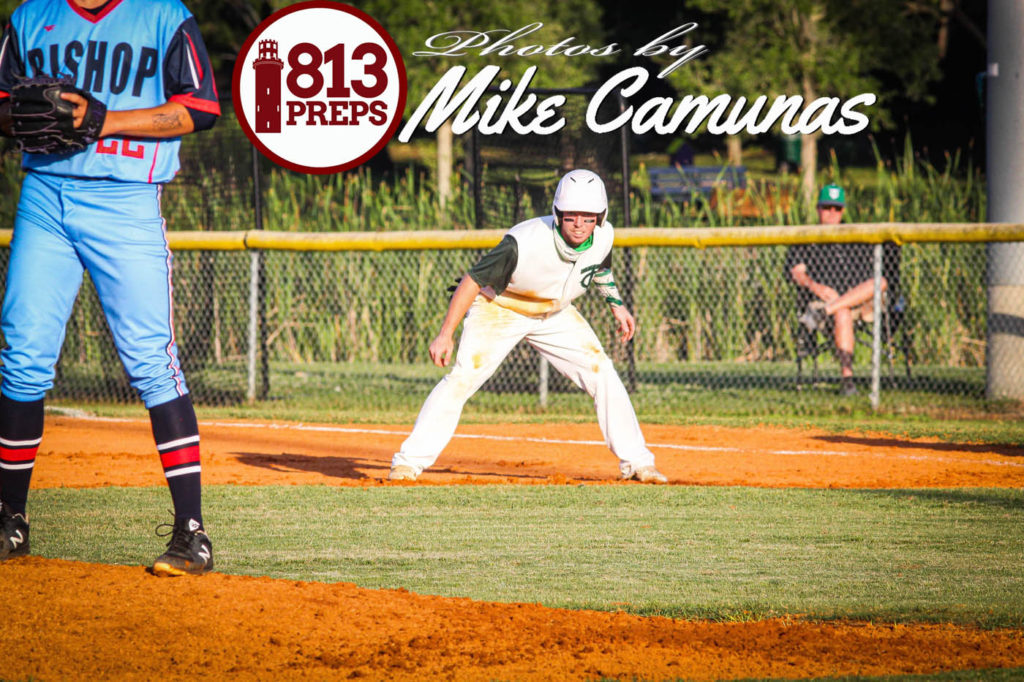 Tampa Catholic senior outfielder Tyler Whitfield leads off first during the Crusaders’ 4-2 loss to Bishop McLaughlin in 10 innings, in which Whitfield was 1-for-4 with a run scored (photo by Mike Camunas).

“When you have two good teams going at it,” Tampa Catholic coach Ty Griffin said, “and playing hard and have guys who want to win, it’s going to get a little heated, but that’s baseball. Things can get a little heated as long as they stay respectful, which I thought it did.”

Indeed, both dugouts were very vocal the whole game, although both were respectful, as Griffin pointed out, as each respective team kept its high energy.

“We handled it well,” DiBenedetto said of players chirping at each other. “All part of the game.”

This game would settle in for a couple of innings, with both starting pitchers finding a rhythm, especially Hurricanes starter, senior RHP Tanner Boccabella. He would pitch seven innings (98 pitches), allow six hits, two runs and a walk, but strike out six, while Crusaders junior righty, Mike Richards, threw for five innings (57 pitches) allowed three hits — one of them the solo homer — and struck out two.

“Tanner is our senior leader,” Eskew said, “and as the year has gone on, he has been more efficient and been really carrying it in his starts. He’s kept us in every game he pitches.” 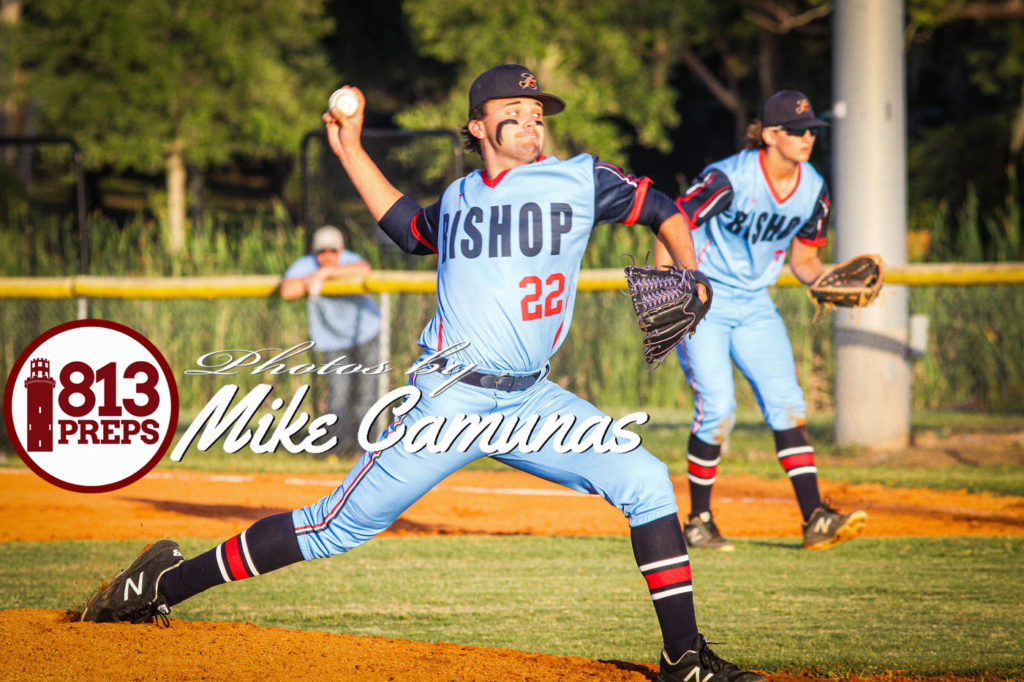 Bishop McLaughlin (12-7) would finally knot the score at 2-2 in the top of the sixth when DiBenedetto would bring home Jacob Duncan on a sac fly after the latter opened the inning with a walk, was bunted over to second and then advanced to third on a wild pitch.

Then … nothing. For 3 1/2 innings, there were pitching changes and some more chirping, but it was Tampa Catholic who struggled to get anything going, including scoring chances. The Crusaders would go three and out in five-straight innings from the bottom of the sixth to the 10th, as well as finish the game with eight strikeouts.

“You’ve got to cut down on the strikeouts,” Griffin said. “That’s really the biggest thing right there. After that, it’s going to come down to who gets a two-out hit. And that’s what they did — they got the two out hit and we didn’t.” 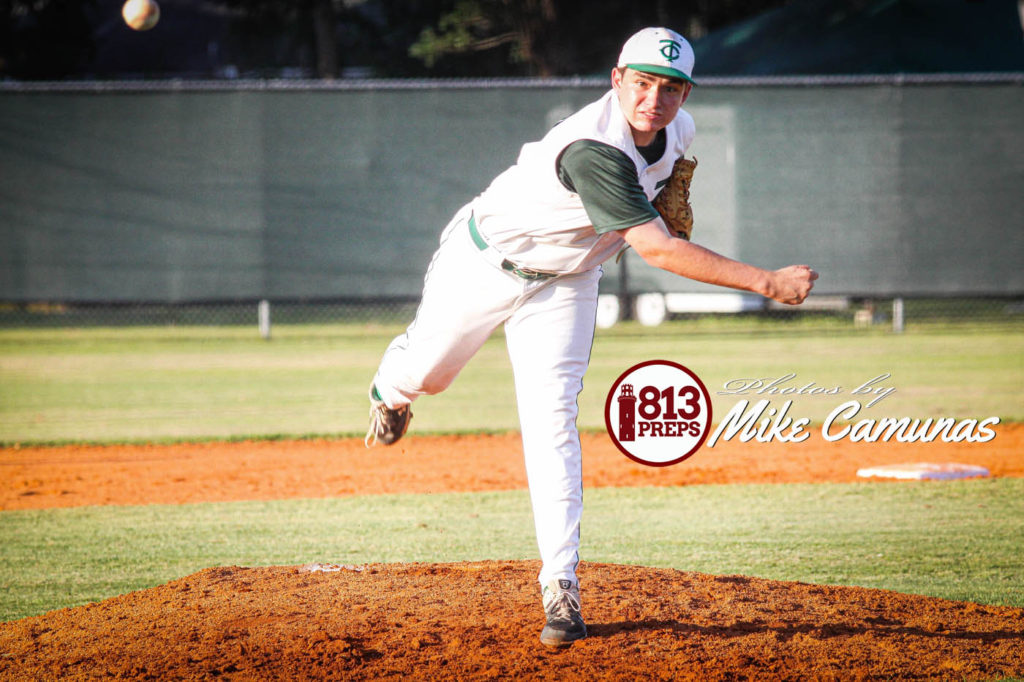 Tampa Catholic junior RHP Mike Richards threw for five innings (57 pitches) allowed three hits — one of them a solo homer — just the one run and struck out two in the Crusaders’ 4-2 loss to Bishop McLaughlin in 10 innings Tuesday night (photo by Mike Camunas).

After the Hurricanes squandered a runners-at-second-and-third chance in the ninth, Bishop struck in the 10th. It was, once again, DiBenedetto who would drive home Duncan, though this time Jacob’s younger brother, sophomore Andrew, who would score from second after a two-out single and a stolen base. 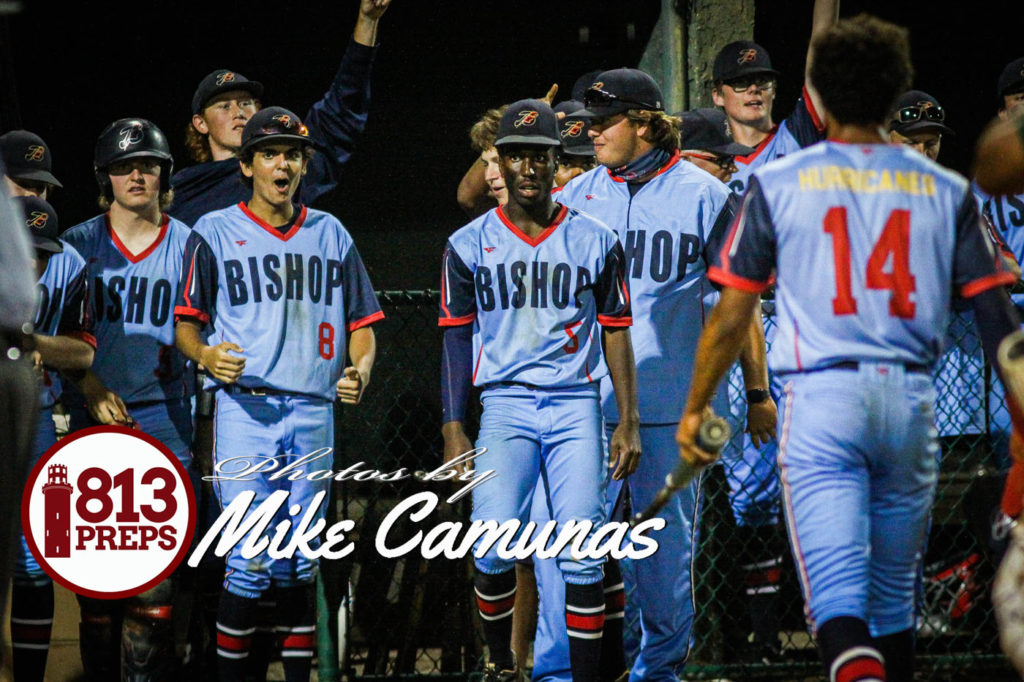 Senior infielder Jacob Duncan, left, and shortstop Isaiah Myles, right, welcome in Andrew Duncan after he scored the go-ahead, game-winning run in the 10th inning of the Hurricanes 4-2 win over Tampa Catholic on Tuesday night (photo by Mike Camunas).

DiBenedetto would score on an infield error following a walk to Knight and an infield grounder by Austin Affrunti.

Isaiah Myles would pitch the 10th for the save.

Knight, who was 1-for-2 in the game, would have three walks, two of them intentional, which is credited to his early-game bomb.

“Oh, that was a bomber, no doubt. I wouldn’t want to pitch to him either,” said Eskew, adding, “and John (DiBenedetto) has been clutch for us all year, so he’s in that third slot (in the lineup) for that very reason.”

Even with the heated rivalry on the line, Griffin wanted his team to take away that this non-district, late-season game was really practice for the district tournament that is on the horizon.

“I tell those guys that I’ve been a part of a lot of winning teams,” he added, “and this is really the warm up, where you hone your skills, find out what you’re good at, what needs work, and then come district time, you’re ready for when it’s one and done (and you’re out of the tournament). A game like this will help them understand that.”

A game and a half, actually. 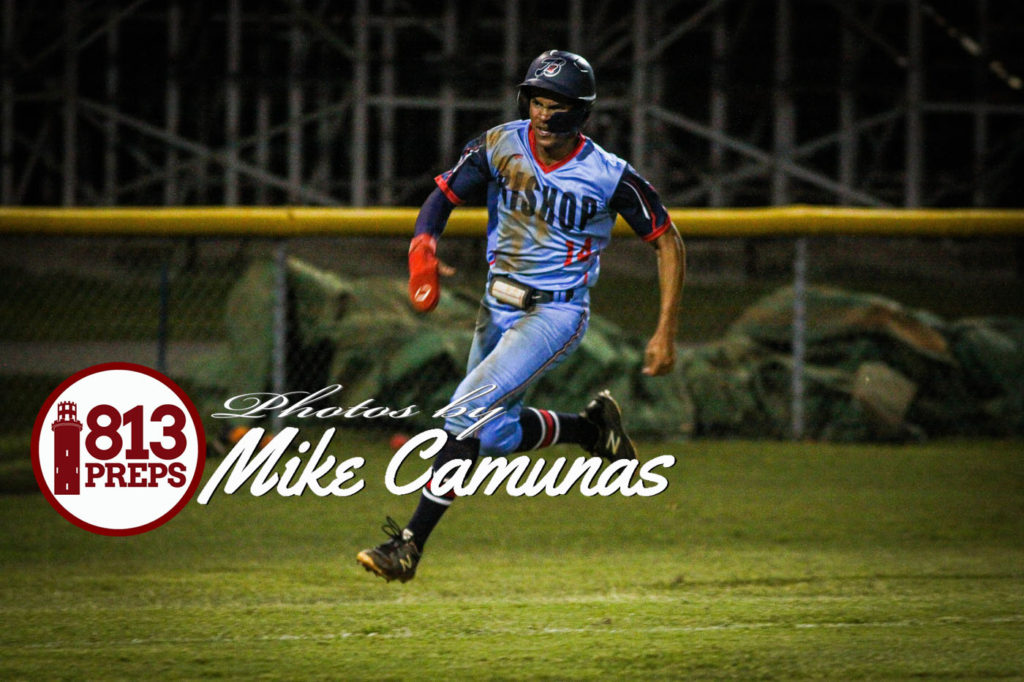