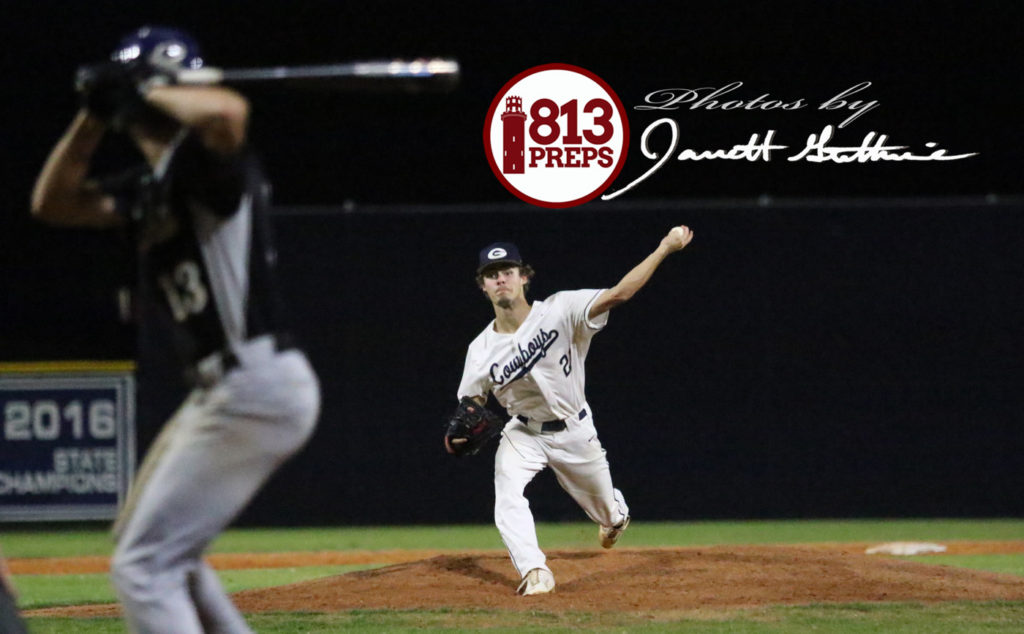 Cowboys senior CJ Hanson pitched three scoreless innings of relief as a trio of Gaither pitchers combined for a shutout win against Robinson.

NORTHDALE – A five, and three-game skid early in the season put Gaither’s baseball team in a bit of a hole and left the Cowboys coaching staff looking for ways to bring the team together. According to senior Colin Jackson, a number of impassioned speeches, some anecdotal and some reproachful throughout the season, have started to find their mark with the team in recent weeks.

Jackson said a recent address from skipper Nelson North, calling on the players to treat and defend each other like they would any member of their own family resonated in the clubhouse.

“Coach North told us to imagine that our Mom was being confronted by a robber, and to imagine what you would do,” Jackson said. “I’m a very intense pitcher on the mound, and that idea just really inspired me. What would I do for my (family)? I’d beat the door down and go after them.” 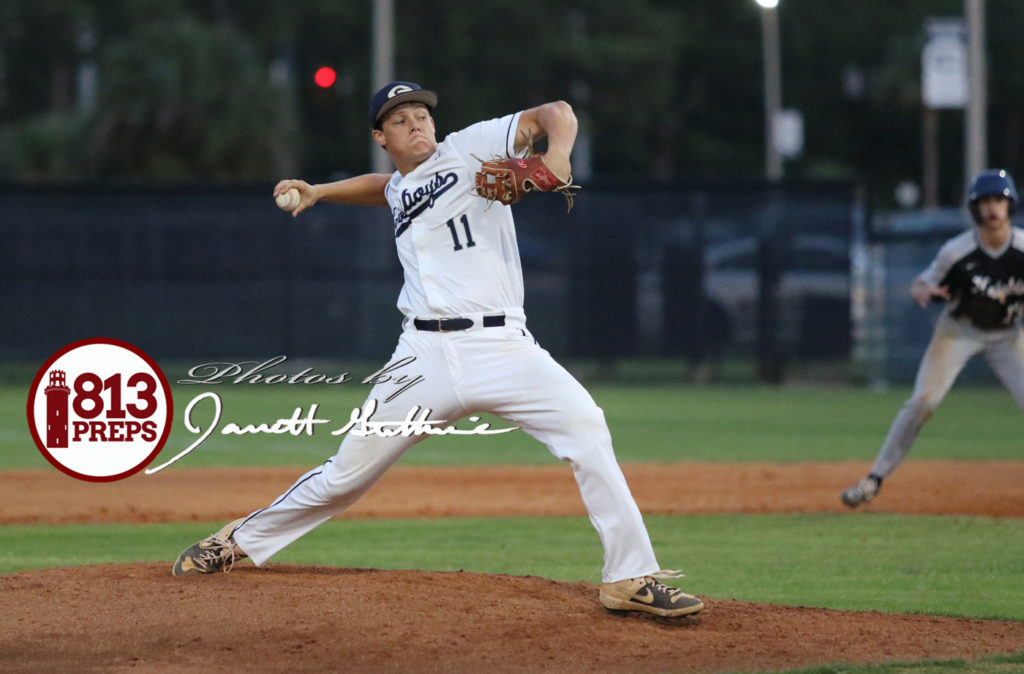 Starting pitcher Colin Jackson improved to 6-0 on the season, pitching three innings and striking out six.

After a 3-8 season start, the Cowboys have won 8-of-10 including Wednesday’s near-flawless, 7-0 dispatching of Robinson at home. The Cowboys family seems to be coming together nicely as the regular season grows short.

“What we’ve done the last few weeks is really focus on our team as a family, working hard and fighting,” North said. “Our whole thing is that this is your family and are you going to go out and fight for one another. That was the message, to fight for each other, fight, fight, fight.” 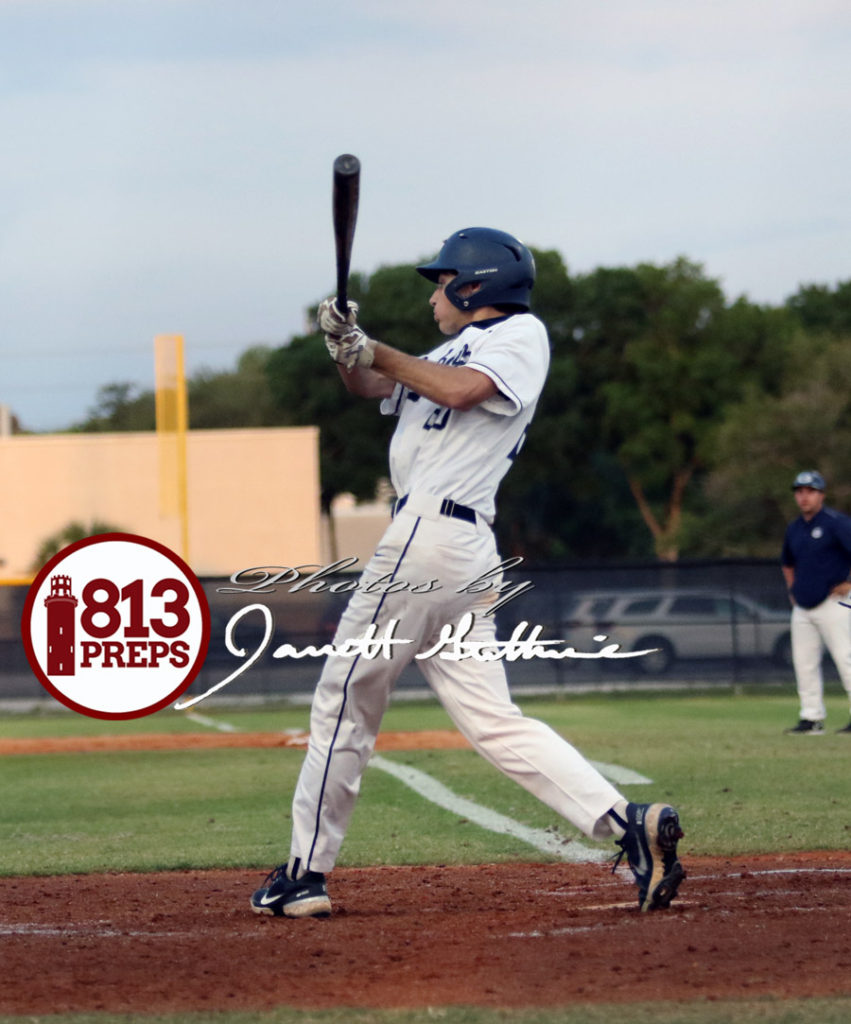 Gaither’s Dominic Zarcone singles in a run in the second.

“Today was a scheduled thing for our pitchers,” North said, “getting our arms in line for districts and I’m pleased that tonight they all had jobs to do, and they did them.”

In the second, senior Austin Grause (2-for-2, double two runs, two walks) led off with a single, stole second, advanced to third on an Israel Oliva (2-for-2) single and scored the deciding run on a single off the bat of Dominic Zarcone. Gaither added another on a CJ Hanson single, and pushed the lead to four when Frank Perez doubled to the right-center gap.

“That was a huge inning,” Perez said. “We needed that for Colin, who was dealing. His slider was really good, and for me I wanted to get that hit in the perfect spot.

“I just wanted to put it in play, I didn’t swing too hard, just put the barrel to the ball and we kept rolling from there.”

A two-out double for Frank Perez and Gaither is up 4-0 in B2. pic.twitter.com/mBopiNOBHN

In total, Gaither had 11 hits including an RBI double from Jacob Choe, and a 2-for-3 night from Miguel Pina, who also scored twice in the win.

Hanson took over on the mound in the fourth and held Robinson (8-12) to just one hit over his three innings, striking out four, before turning things over to Ben Vazquez, who finished the game off with a 1-2-3 inning punctuated with a game-ending strikeout.

“This was a great game by our pitchers,” Jackson said. “It was very satisfying that everyone of us went out, did their job, and we got out of here tonight.” 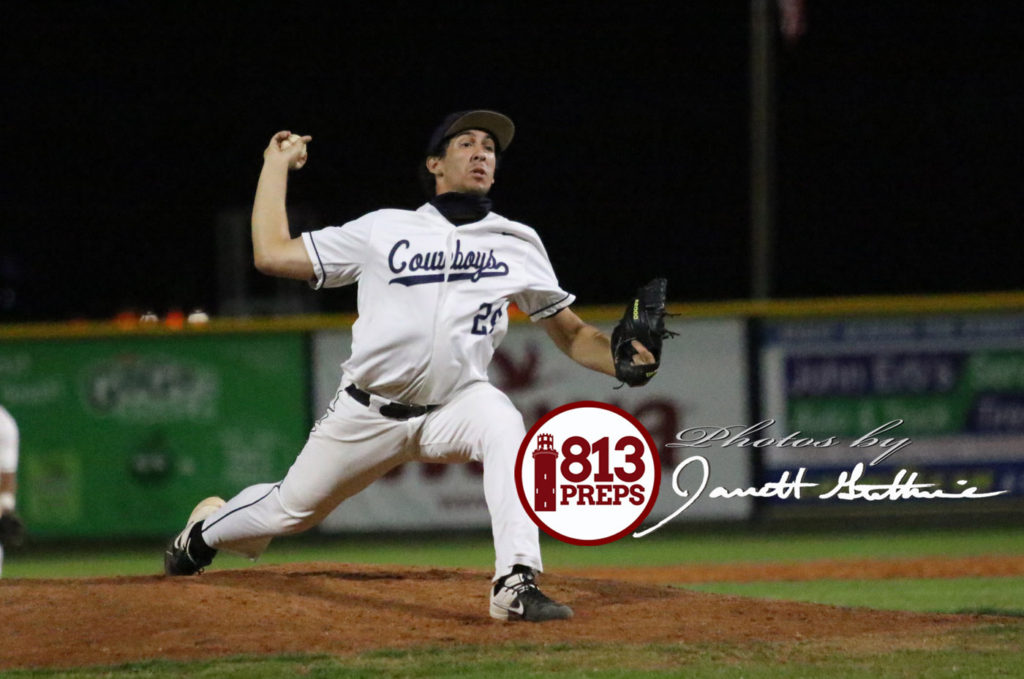 Cowboys senior Ben Vazquez finished off the shutout with a 1-2-3 seventh inning.

Zarcone, who got the Cowboys offense going, echoed Jackson’s satisfaction at watching his team’s pitchers work on the mound.

“They all had that fire on the mound after we put up those runs,” he said. “They did what they are best at tonight, all three of them were clutch out there.”

Kevin Blowers had two of the Knights five singles and also stole a base, but Robinson never pushed a runner past second in the game. Sophomore lefty Nate Jennewein worked a scoreless inning of relief in the sixth inning. 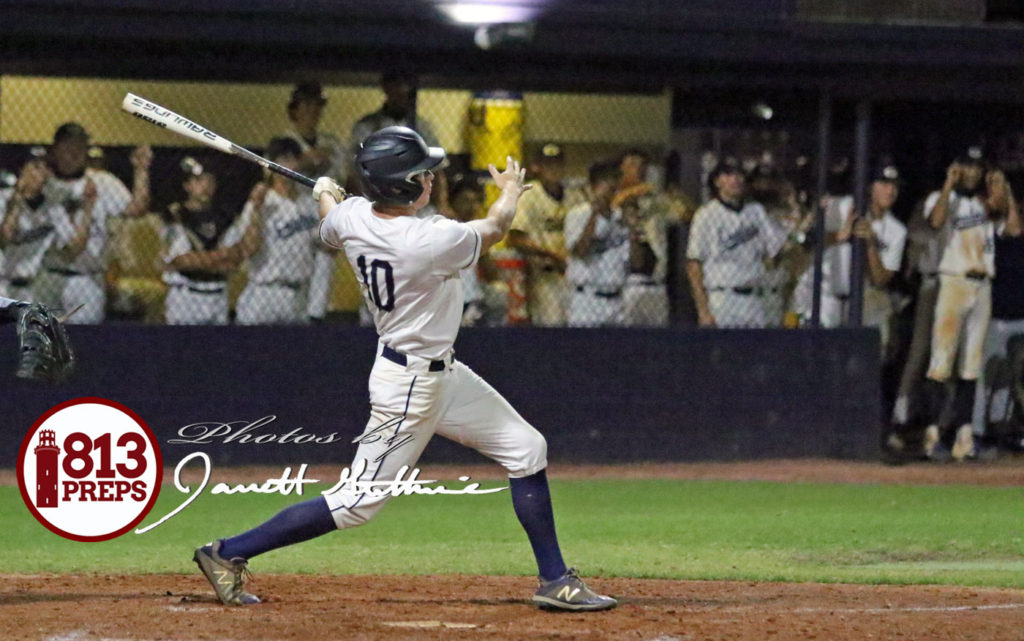 Cowboys hitter Jacob Choe doubles in a run in the fourth inning. 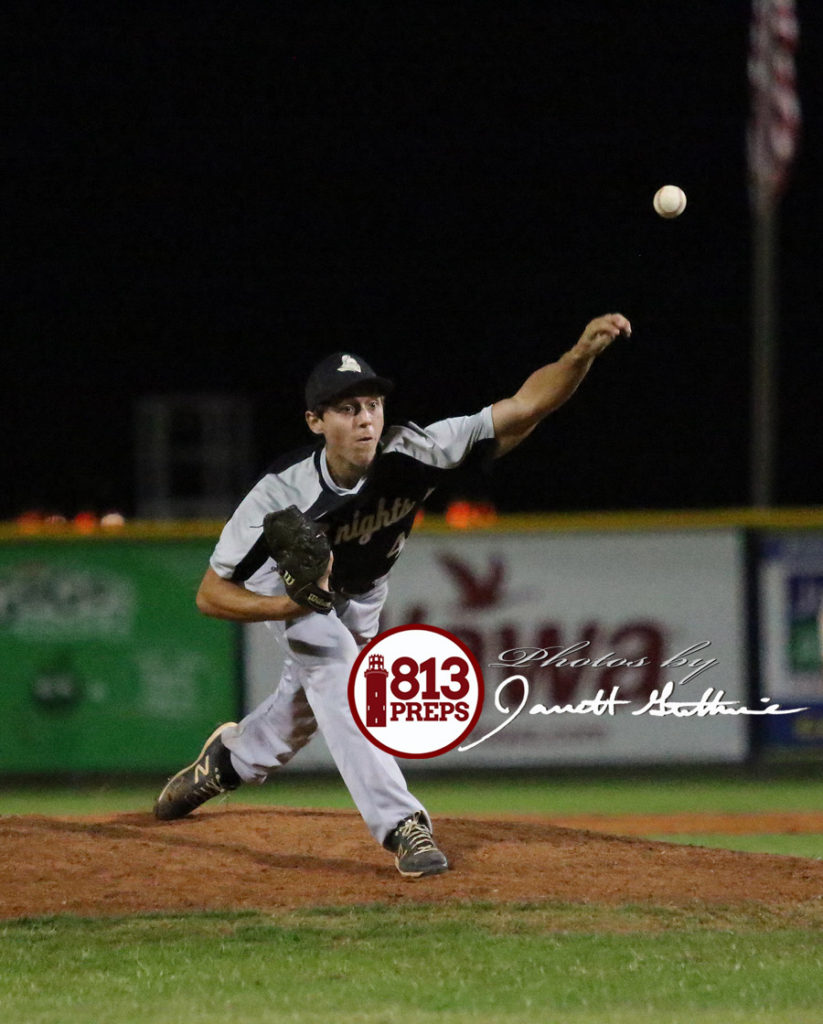 Impressing North the most was the total team effort put forth for seven innings, including just four Cowboys strikeouts against some tough pitching from the Knights.

“Robinson is a very good team with two lefty arms tonight, that I’d love to have,” North said. “And just four strikeouts, some really good two-strike approaches, I’m really pleased with the way this one went.”

Gaither hosts Chamberlain next Tuesday, and finishes the regular season at Freedom on April 22; while Robinson travels to Plant City on Tuesday, and hosts Riverview next Thursday. 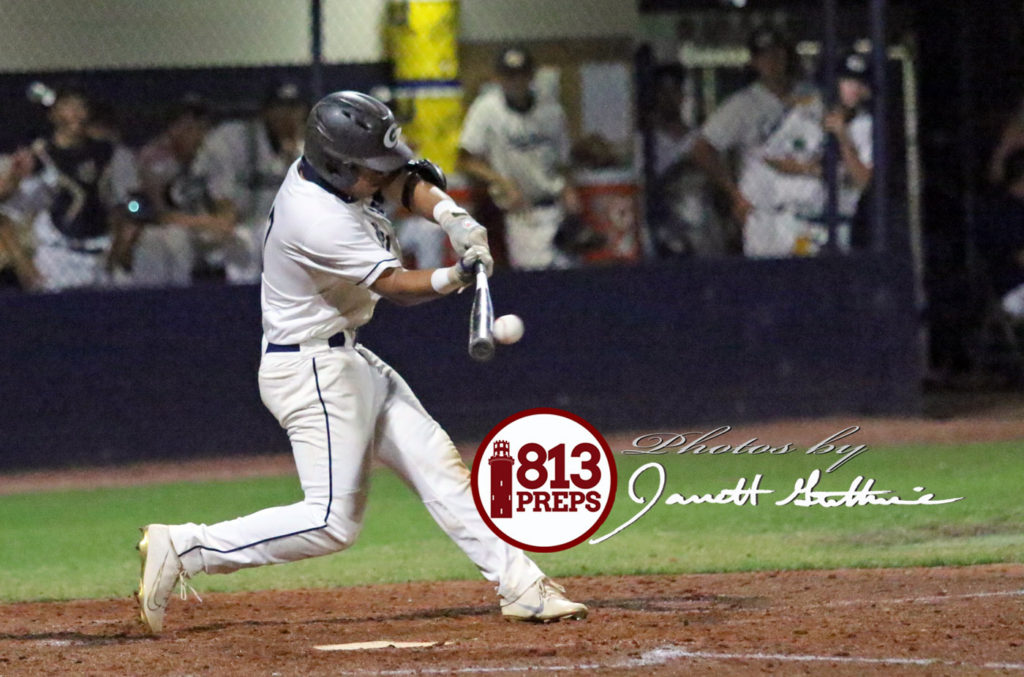 Gaither sophomore Miguel Pina connects with one of his two hits in the win.