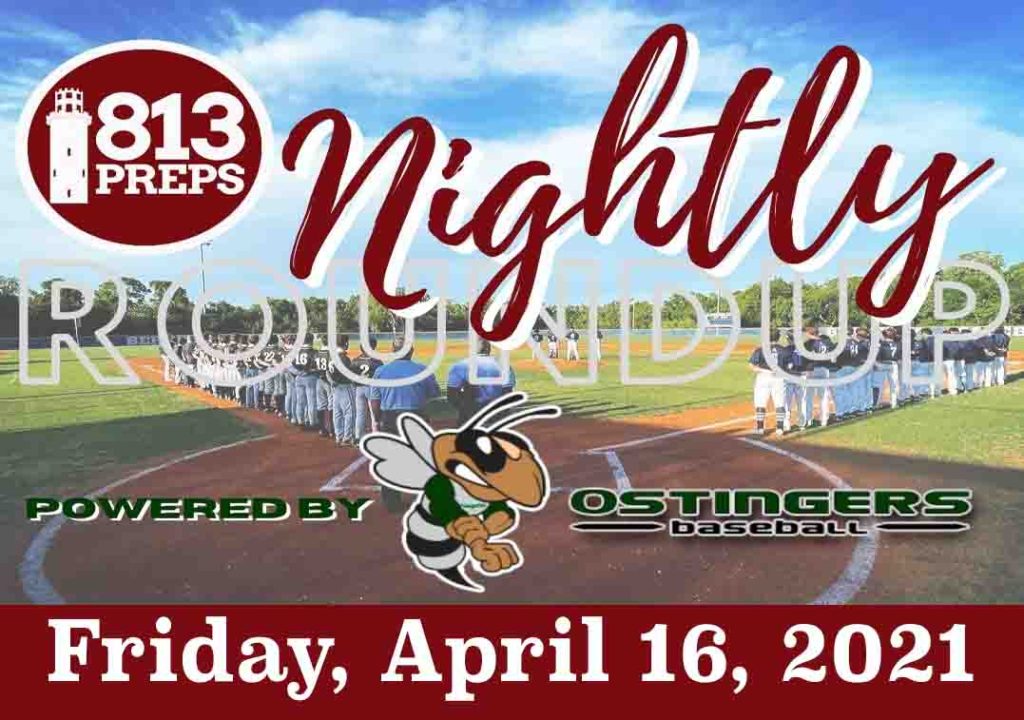 Bloomingdale won a tough, late-season fight with Plant when Gabe Garrett’s line drive single to center scored Carlos DeJesus. Bulls junior Jack Owens and Plant senior Jac Caglianone battled from the mound on Friday, with Owens earning the win, allowing one run on just three hits with five strikeouts. In response, Caglianone pitched six innings, earning a no decision, and striking out seven. Dawson Harman doubled in the third inning and scored on single from brother Drake Harman one batter later for the Bulls, and Sam Meade hit a solo home run (his fifth of the season and second in as many games) in the fifth for the Panthers.

Berkeley Prep senior Will Parkinson pitched five innings, allowing just one single as the Buccaneers offense broke things wide open in the second when Cade Kurland (1-3, double, run) was hit by a pitch with the bases loaded, followed by two-run singles by Andrew DiMisa (2-for-4, three RBI) and Anthony Castillo (3-for-3, double, three runs, three RBI).

Three Foundation Christian pitchers combined for a no-hitter against Bradenton Bayshore with Shane Saunders striking out seven in 3 2/3 innings pitched, Austin Corn earning the win with five strikeouts, and an out on the mound from Caden Kull. Saunders and Carson Kull each drove in two runs in the Panthers win.

Jesuit senior Dominic Castellano had an incredible 15-strikeout, one hit performance across six innings as the Tigers earned the 20th win of the regular season behind a big offensive night as well. Calvary Christian’s Landen Maroudis hit a solo home run in the first off Castellano, but that was all the offense the Warriors would muster. Wes Mendes’ RBI single in the second tied the game, and the Tigers pushed it out of reach the next inning as Nick Rodriguez’s RBI single and a two-run hit from Jack Martinez sparked a five-run frame. Rodriguez (two RBI, run), Mendes (double, two RBI, run), Martinez (two RBI, two runs) and BJ Graham (double, two runs, RBI) each had two hits in the win, and Alden Segui walked one, hit a batter, but struck out three to finish the game on the mound.

It was senior night in Ruskin, but the night would belong to freshman Andrew Gingrich. In the second inning he slapped a ball to the right side of the infield on a well-executed hit-and-run, scoring Sebastian Munoz from second, and the next inning Gingrich slapped a double the opposite direction scoring two, and two more would cross including the Longhorns freshman on a misplay in right field. Senior John McCool pitched five shutout innings, striking out five and fellow senior Jaylin Tose’ pitched two clean innings of relief.