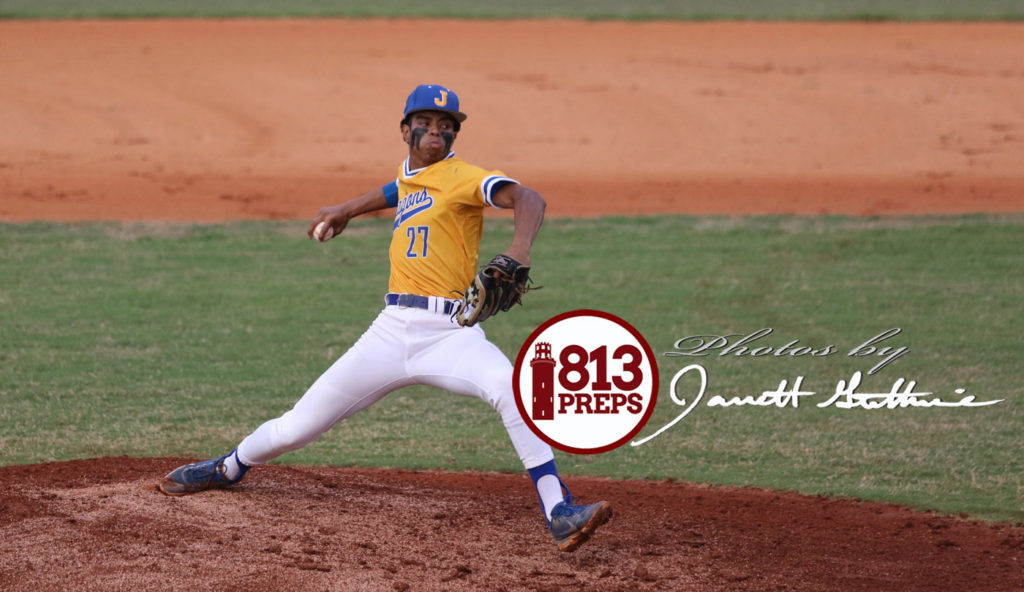 Jefferson senior Javier James struck out 12 in six innings of work, allowing one run and one hit.

TAMPA – Jefferson senior Javier James found his groove quickly on Monday night, mowing through visiting Steinbrenner’s lineup the first time through. In the fourth however, he hit the leadoff batter Eliecer Martinez, and with two outs walked the bases loaded, and walked in a run. After the Warriors made it on the board, James stepped behind the mound took a deep breath and went back to work.

The righty ended the threat with a strikeout, and allowed just one sixth-inning single on his night, and struck out a dozen as the Dragons topped Steinbrenner 3-1.

“The first inning I was really trying to feel out my pitches, but I got them 1-2-3,” James said. “But pretty quickly I started feeling my curveball, my off-speed and everything was perfect.”

He admitted after the game, the fourth inning was one that kind of got away from him a bit, but he knew what he needed to do to get out of it with minimal damage with the big strikeout.

“Things happen in baseball and I knew it wasn’t going to be a perfect game,” James said. “I stepped back, remembered to breathe, and three strikes got him out.”

James helped his own cause in the first with a leadoff single, moved to third on a bunt and an error and scored on a Yaidel Perez sac fly. Jefferson (13-9) padded the lead in the first when Alejandro Montada doubled to center, and Jaiden Duarte (2-for-3, double) singled in Montada to push the game out of reach. 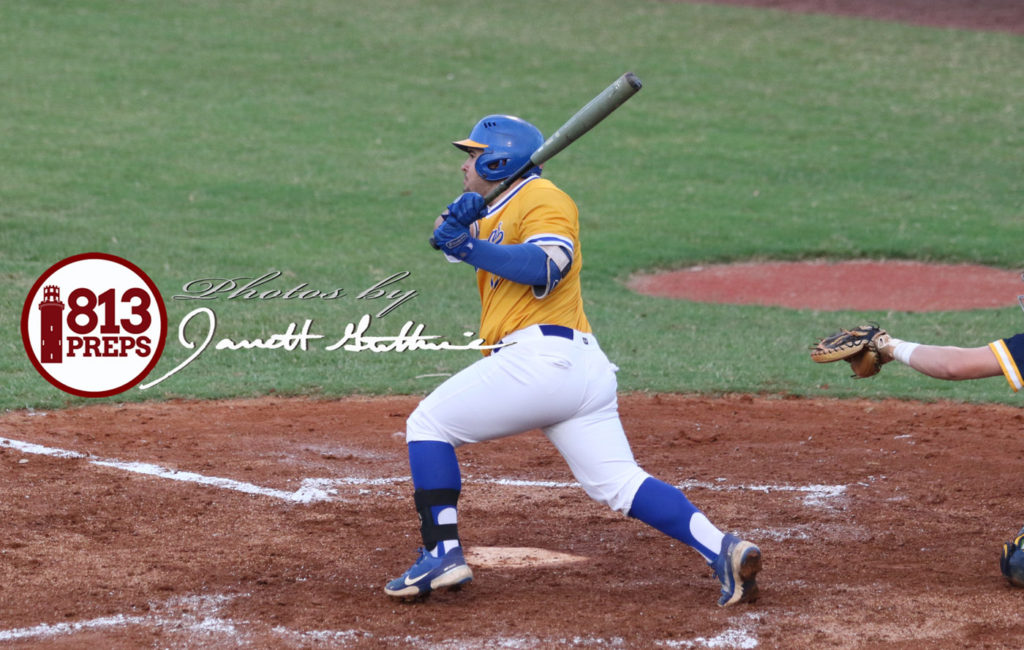 Dragons junior Alejandro Montada doubles in a run with a line drive to center.

“That double was just trying to hit it hard and put it in play,” Montada said. “That’s been the approach all season, and tonight it came together nicely.

“That was a good team win, everyone did their part and when we do that, the results show.”

Junior lefty Aidan Dorrell was saddled with the loss, working five innings, allowing three runs (one earned) and striking out one.

The Warriors got a handful of nice plays defensively from senior catcher Tayden Hall, who threw out Duarte trying to steal second in the first inning and made a nice knee-sliding catch of a popped-up bunt about 10 feet in front of the plate. Martinez also made a nice leaping catch in centerfield for an out, and Camden Boyer turned a nice double play fielding a hard chopped near the second base bag, stepping on two for the out and throwing to first for the final out of the fifth. 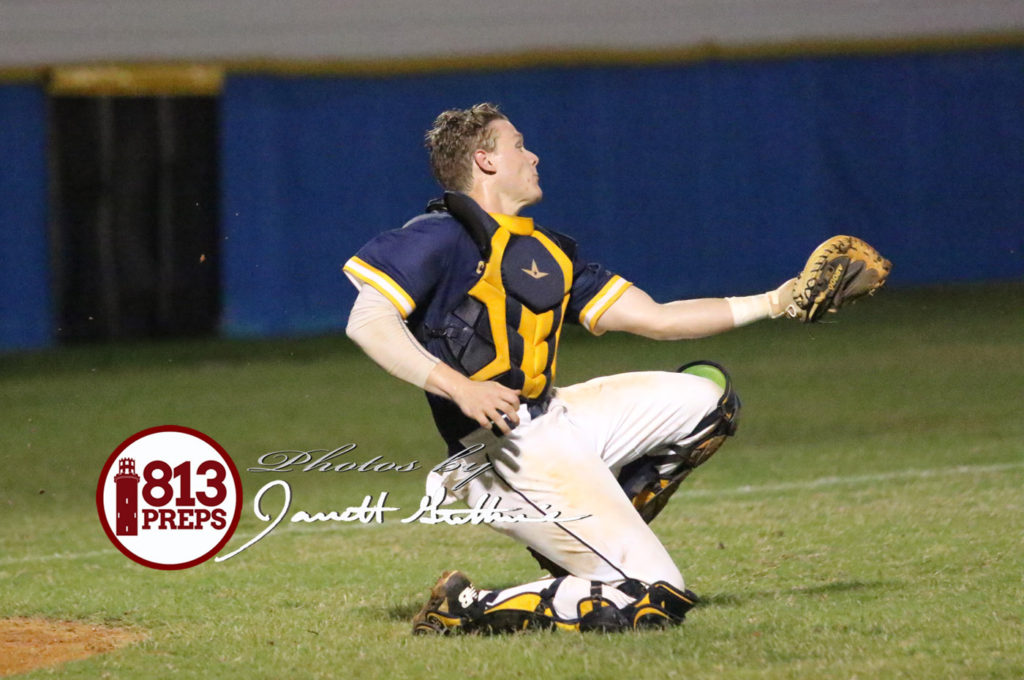 Warriors senior catcher Tayden Hall slides for a catch in front of the plate in the fifth inning.

Steinbrenner’s (10-13) lone hit was an infield single by Chris Roberts in the sixth inning.

Defensively for the Dragons, the play of the game belonged to the third baseman Pollito Perez who hustled after a ball down the third base line and made a great catch in the second.

Junior Julian Vargas earned the save, relieving James for the seventh and ending the game with a strikeout in his 1-2-3 inning. 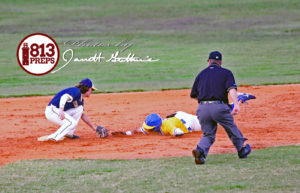 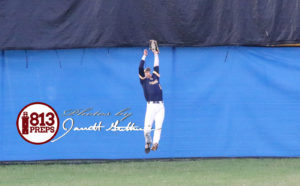 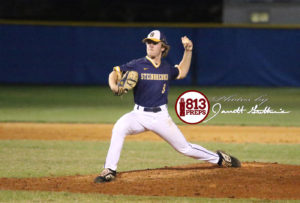 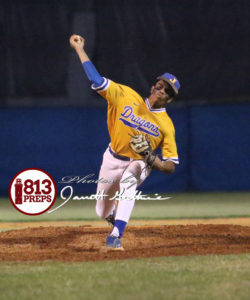 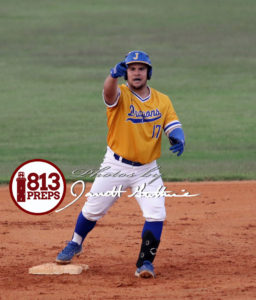 Jefferson’s Alejandro Montada points into his dugout after his RBI double.