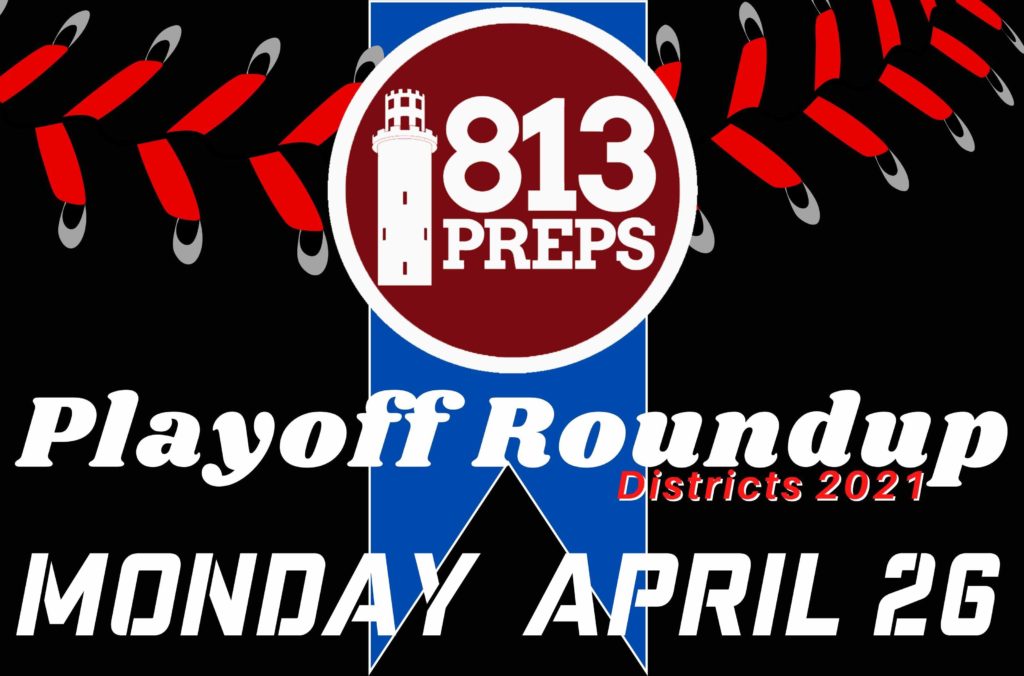 Foundation Christian senior Carson Kull struck out 13 in a complete-game, but it wasn’t enough to get the Panthers past Victory Christian. Shane Saunders hit a triple and scored a run, and Austin Corn was 2-for-3 with a run scored for the Panthers.

Sophomore Zach McQuiston pitched his team to a win, and was 2-for-3 with a pair of doubles and three RBI  in the Lancers six-run third inning as Cambridge Christian topped Seven Rivers. Leyton Parmer picked up the save for the Lancers.

Robinson junior Lamont Akins pitched five shutout innings, striking out a dozen as the Knights cruised to a shutout win over Mulberry. Seven Knights hitters picked up hits in the win, with a pair of productive outs from John Anderson and Jacob Maskin producing a pair of second-inning runs to secure the win. Kevin Blowers, Jeremiah Henderson and Aleks Yarich each had doubles and an RBI in the win.

Senior Carson Moore pitched three scoreless innings to earn his eighth win of the season, and Cameron Copple earned a long save pitching the final four innings as the Dragons topped Blake in quarterfinal play. Dylan DeGusipe had two hits, including a double and drove in four, Alejandro Montada was 2-or-2 with a walk and two runs scored, and Yadiel Perez doubled and stole home in the first. For Blake Titus Woods-Ayers singled and eventually scored on a passed ball, and Jake Montgomery was 2-for-3.

Senior Kendal Spencer tripled in Daniel Santana (3-for-4, double, two RBI) in the third to put the Eagles ahead of Spoto in a district quarterfinal win. Isaiah Soler (double) and Carson Juntilla each were 2-for-3 with two runs and one RBI apiece. Tres Toledo struck out four, while allowing just two hits in five innings on the mound.

King senior Jonny Davis pitched a complete-game, allowing two unearned runs and striking out five as the Lions defeated Sumner on Monday. David Twiddy (2-for-2, two runs, two RBI) had an RBI single in the second inning to provide what would prove the winning run, while Hunter Keding was 1-for-2, with two runs and two RBI for King. Sumner scored two in the fourth inning with Garrett Morgan and Landon Wilder driving in runs for the Stingrays.

Lake Gibson did not arrive at Middleton for their game, and once reached by Tigers coaches said they were not able to field a full team and would forfeit the game; no further details were provided to Coach Mark Whitten. Middleton advances to play at (1) Auburndale on Tuesday.

Justin Corns stole home and Matthew Hall singled in a run in a two-run third inning, and Armwood held on as Tampa Bay Tech rallied late in a quarterfinal game. Corns also pitched all seven innings for the Hawks, striking out eight. Jacob Johns was 2-for-3 with a run and two RBI, while Jordan Mention was 2-or-3 with an RBI for Armwood. Evan Mobley doubled in two, and Javion McKay singled him in in the seventh as the Titans cut the lead to one, but couldn’t finish off the comeback after falling behind five in the first three innings.

Newsome held off some late-inning comeback attempts by Riverview to advance to the district semifinals. After scoring a pair in the sixth inning, the Sharks got a bit to aggressive and got caught by Wolves catcher Kelsen Johnson trying to swipe third. Riverview got its first two runners aboard in the seventh, but reliever Jack Weber came in and closed the door for the save. Senior Chase Havener went 5 2/3 innings on the mound to earn the win. Fulton Lockhart had an RBI double and sac fly for the Wolves, while Evan Dempsey had an RBI triple, and Lucas Phelps had three hits, including two doubles. Kipp Kochera (RBI), Caden Santucci (RBI) and Fisher Weeks (run) each had two hits for the Sharks.

District playoff win tonight against Riverview 5-3. Triple off the fence to score another run in the 4th. Go wolves!!@BaseballNewsome @OstingerAcademy @southeastelite @813Preps pic.twitter.com/UswPiyBnSd

Lennard’s Matthew Counts tied the game with an RBI single in the top of the fifth, only to see Lakewood Ranch’s John Schroeder hit a solo home run in the home-half as the Mustangs pulled off a quarterfinal win. Carter Payne struck out five while allowing two runs (one earned) for the Longhorns.