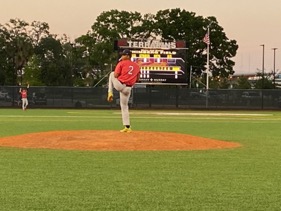 Senior Jose Pena finished Tuesday night’s game with four innings pitches, seven strikeouts and no hits allowed as well as two hits, a walk and an RBI at the plate (photo by Dylan Rudolph).

TAMPA – District tournaments kicked off with hot bats and hotter pitching in 3A-7, but only for one team. The Tampa Prep Terrapins’ 6-0 win over the Bell Creek Panthers at Shimberg Field secured the season sweep and a chance for the district championship. With the Straz Center in the background, Tampa Prep came to perform, recording ten total hits, six runs and allowing no hits against Bell Creek in the seven-inning district semifinal matchup.

The tone was set from the first pitch. Tampa Prep pitcher Jose Pena immediately made his presence felt, sitting down six of the first seven batters he saw and striking out four through the first two innings. The senior would finish his night on the mound after four scoreless innings, striking out seven with three walks and no hits allowed.

Even with the excellent performance, Pena needed some help from the defense behind him to keep the no-hitter going, including a third-inning line shot that was snagged by junior first baseman Roger Haughey, who got the tag out for the inning-ending double play.

Pena continued to make an impact for the team, this time at the plate. A good at-bat to lead off the second inning led to a walk that was eventually driven in by a Grant Varner double for the game’s first score and a Terrapin lead. A sacrifice fly from junior Haughey quickly followed the score, and a ground out that drove in Varner made it a three-run game.

“Got some bunts down early and put some pressure on their defense from the bottom of our lineup. (We) came up with some big hits,” head coach A.J. Hendrix said after the game.

Bell Creek pitcher Xavier Talbot temporarily settled his team down in relief with a sidearm action that gave the Terrapins trouble offensively. But it didn’t last long as a fifth-inning single from leadoff hitter Ty Jones drove in both runners in scoring position, and an RBI single by Pena capped off the second three-run inning for the Terrapins, giving them a six-run lead that would hold until the end.

With the lead in hand, the Terrapins called on their bullpen to close it out. A combined effort from Varner and freshman Alex Sotiropoulos helped Tampa Prep close out the Tuesday night contest handily, keep the no-hitter and advance in the district tournament final.

“We had some great innings from Jose (Pena) and Alex (Sotiropoulos). And Grant (Varner) has become our closer.” Hendrix said with a laugh. “He’s got a zero ERA every time he steps on the mound. There he bulldogs up. He just fights and gets people out.”

Tampa Prep now moves on to the district championship, where they will play top-seed Lakeland Christian, who defeated Windermere Prep 5-1 in the early game on Tuesday. The championship game is set for Thursday, with the first pitch at 7 p.m.

“(Lakeland Christian) is a very, very good baseball team,” Hendrix said. “But if we come out and we play error-free baseball, and we throw strikes and don’t walk people, we can compete with anybody.”