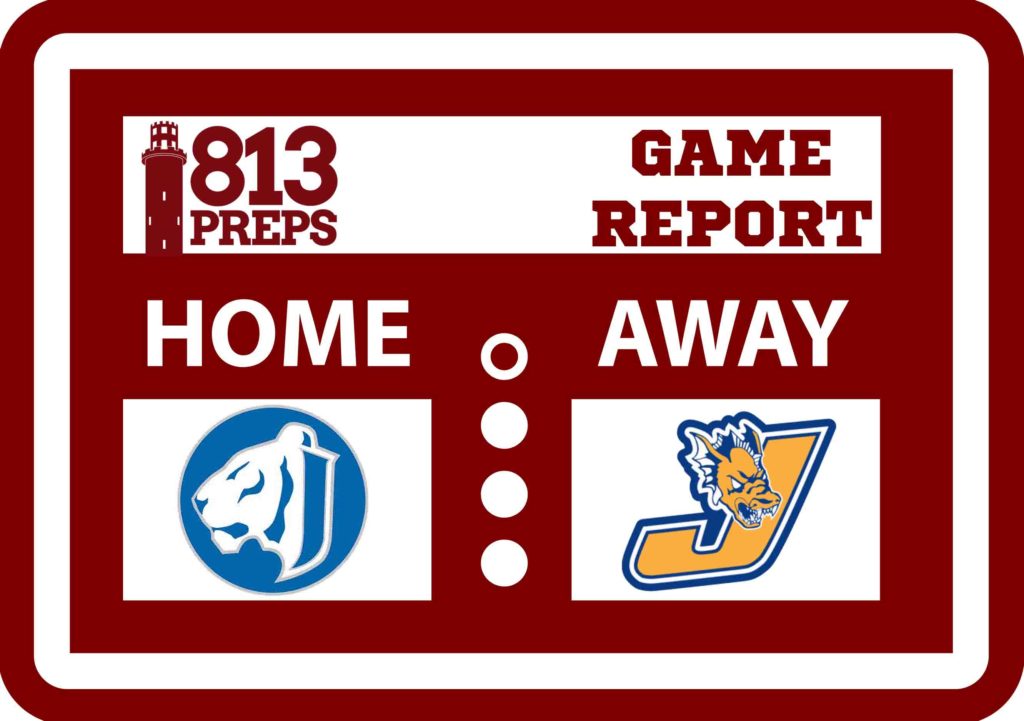 TAMPA – On a beautiful night at Hyer Family Park on the campus of Jesuit High School, the Jefferson Dragons and host Tigers met for the fourth time this season – this time to see which would claim the 5A-7 district title.

The two teams battled early, before Jesuit pulled away behind homers from Wes Mendes and Cole Russo and pulled away for its fourth win over the Dragons on the season, finishing off the title game 10-3.

Jesuit took a one-run lead in the bottom of the first when Bradke Lohry was hit by a pitch, stole second and third base and then raced home on a Cole Russo fielders choice. Jefferson came right back in the top of the second with back to back singles by Jaiden Duarte and Yadiel Perez and a sacrifice bunt by Matthew Johnson resulting in a throwing error. An RBI single by Javier James plated the third run for the Dragons as went up 3-1.

AJ Nessler lead off the bottom of the second for the Tigers with a line drive single to right center field. After a hard line drive out to left field by Jack Martinez, up to the plate stepped the 9-hole hitter, Vanderbilt commit center fielder, Wes Mendes.

“I was just trying to hit the ball hard and saw the change-up really well,” Mendez said after the win when asked about the two-run, game-tying home run.

Sosnowski, when asked after the win what his thoughts were entering the game down two runs, said: “I was just trying to throw strikes and get ahead, working off the fastball.”

Kris Sosnowski gets back-to-back strikeouts with a runner on 3rd to end the top of the 4th inning.

Drew Hunt came in the game to pitch the top of the seventh to close out the district championship win.

With the Tigers up 7-3 in the bottom of the 6th inning, senior catcher and UCF signee Cole Russo, sealed the championship for the Tigers with a towering three-run home run over the scoreboard in right-centerfield.

With a mighty swing, Cole Russo rocks a 3-run missile off the top of the scoreboard in left-center, then imprints his right cleat on home plate.

Coach Miguel Menendez has lead the Jesuit Tigers to six-straight district titles and when asked after the title celebration what he was thinking he stated: “I am really proud of the guys, they are a really talented group, so it is easy to just let them play.”

Jesuit will host 5A-8 runner-up Brandon next Thursday, while Jefferson travels to Auburndale.