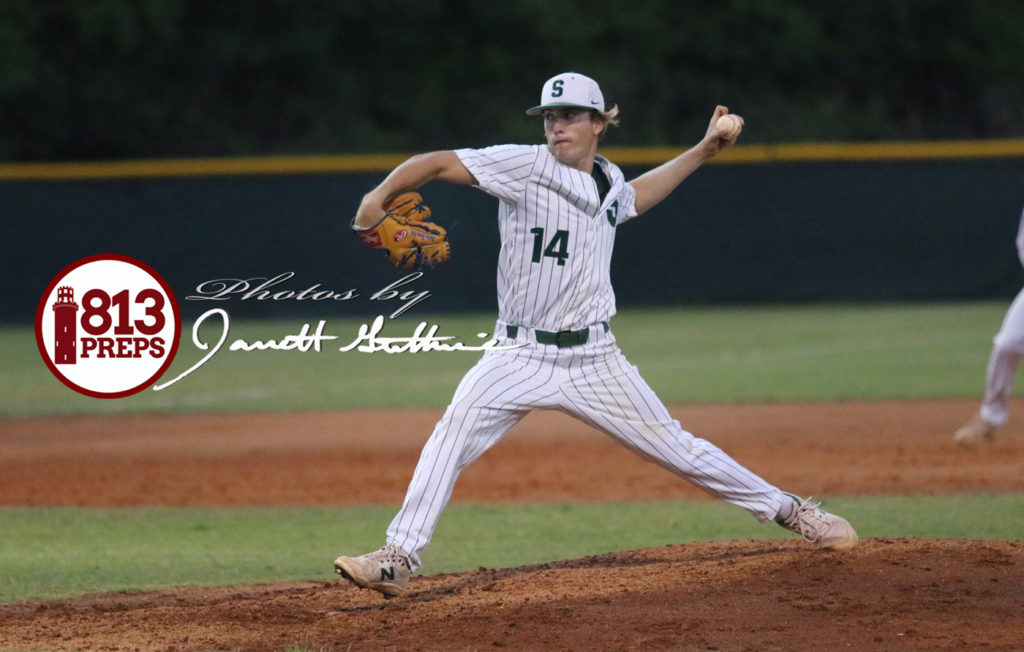 Sickles senior Holden Wade struck out a dozen in a complete-game shutout as the Gryphons advanced to the 7A-7 finals with a win against Steinbrenner.

CITRUS PARK – Stoically, confidently … and consistently, Sickles senior hurler Holden Wade slowly strolled the path from the mound to his dugout – inning, after inning – the lefty methodically mowed down hitters in the Gryphons 2-0 district semifinal win against Steinbrenner.

Wade, a Tallahassee Community College signee, held the Warriors to just three singles and a walk, while striking out a dozen as Sickles earned a spot against top-seeded Wharton (winners 6-2 over Alonso) in Friday’s 7A-7 district championship. 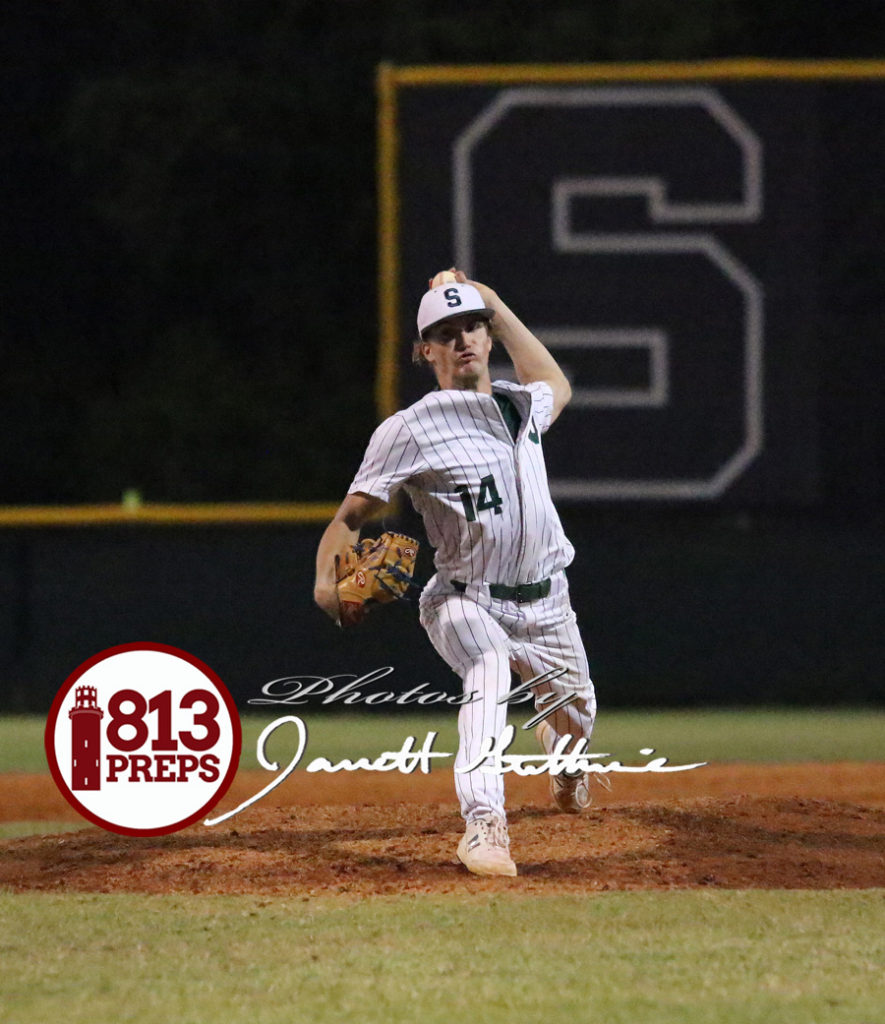 Wade’s emotions were tempered throughout, a modest fist pump off the mound in the third after stranding a runner at second with a strikeout, as well as a very brief smile after he pumped in two devastating changeups and before he dropped in a two-seamer for a swing and miss K in the fifth, then back to his well-paced march, including in the sixth when a skied pop-up to left ended an inning and he was already across the third base line, not even a glance over his shoulder when the ball slapped leather. The only break in his gate came after he fielded and threw for the final out and he was mobbed by fellow senior Bobby Christy halfway back to the dugout.

“I told (catcher Justin) Allen that my changeup is on, and has been breaking down and away a lot,” Wade said of the fifth-inning sequence. “When that is working, I get to play mind games a little bit with hitters, and it’s a lot of fun.”

On the other side, Steinbrenner starter Camden Boyer and reliever Aidan Dorrell did all they could to keep the Warriors in the fight. Boyer cruised through three innings, before running into a bit of trouble in the fourth.

Chase Jackson singled and advanced to second on a bunt, before Brandon Dessi sent a ground ball skipping between third and short and Jackson turned it on, diving head-first into home.

“That was a great feeling. A great feeling,” Dessi said. “I knew (Jackson) was going to make it home when the ball got through the infield. I knew I had to hit the ball hard and it would find a hole.” 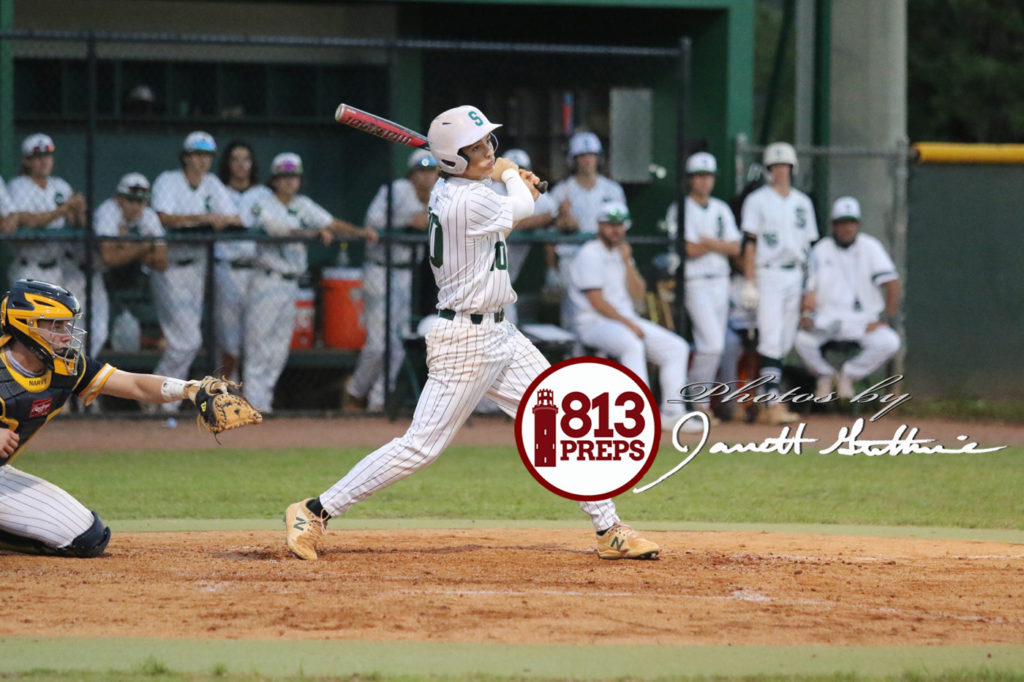 Sickles senior Brandon Dessi drives in the game-winner in the fourth inning.

But Boyer composed himself quickly and the Warriors ended its second-straight inning with a double play. Boyer, allowed just three hits and three walks in his four innings, while striking out three.

Steinbrenner (12-14) turned to Dorrell in the fifth, who worked a 1-2-3 frame, but was tagged to start the sixth when Chase Conville smacked his first varsity home run over the fence in left.

“Honestly, out on the field my contacts were dry and my eyes were trying to adjust, and right before I stepped in the box for that at-bat things adjusted,” he said. “Right away, I knew I was going to do damage, I was going to do something with a ball I could drive.” 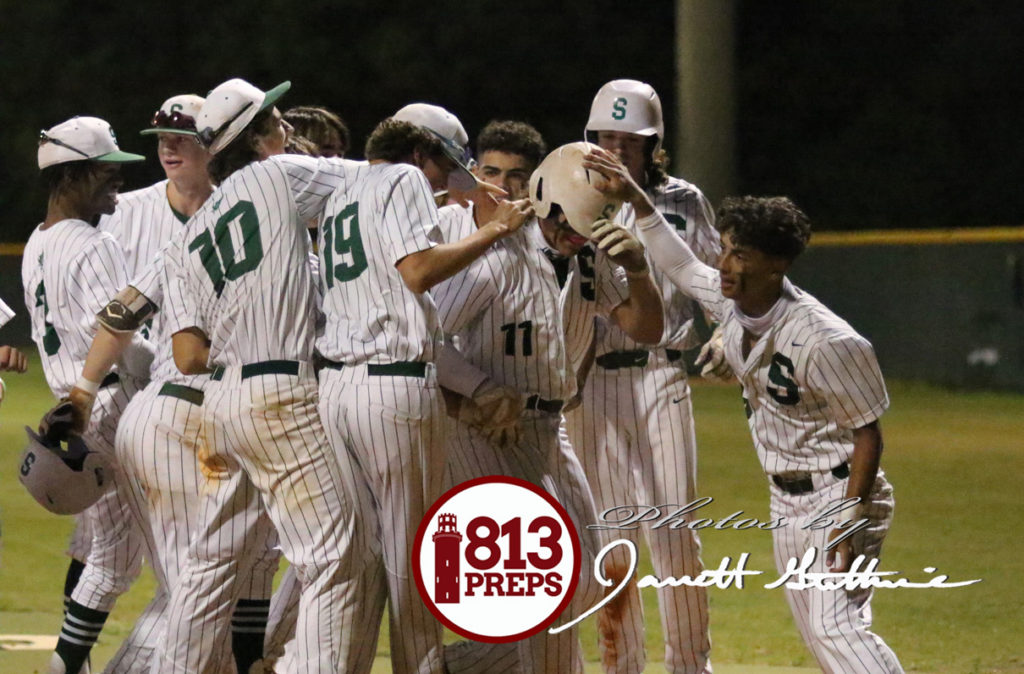 Senior Chase Conville is mobbed by his teammates at the plate after his first homer of the season.

Conville, who had hit into a double-play in his previous at-bat, said he felt like he had some making up to do for his team and his standout pitcher.

“I hit into that double-play with the bases loaded and I know Holden, and our whole team was a little frustrated there,” Conville said. “But we had faith we’d pick up a run here or there, and, we did.”

Though outwardly unfazed throughout, Wade admitted the insurance run was a big emotionally push for the remainder of the game knowing he had a little bit of room to work with. 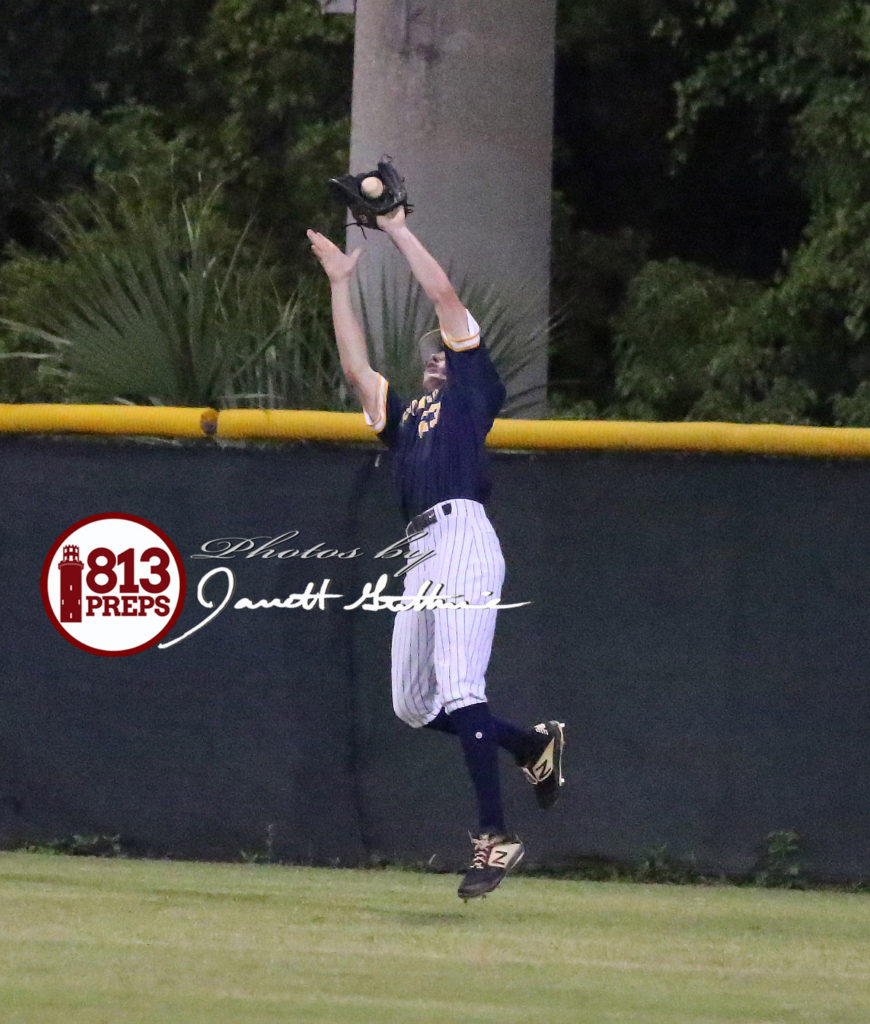 “The home run definitely was a lot of cushion,” he said, “and it definitely made me feel really good, knowing I could give up one run and still close the door. But I felt like even one run tonight, and I could get it done.”

Dorrell finished off  his final three hitters in the sixth, aided by a good backup job by catcher Tayden Hall, who caught a throw from right field way off the mark of first base on a Justin Allen single, and the USF-committed backstop erased the hit and ended the inning with a hose to second base.
But Wade had more marching to do, and despite a Charlie DiCampli’s two-out single in the seventh, completed his task and improved to 7-3 on the season, upping his strikeout total to 80.

“Holden was working his butt off out there,” Dessi said. “Throwing seven innings, just giving it his all.”

Steinbrenner senior Eliecer Martinez had the Warriors other two singles, but never got past second base. 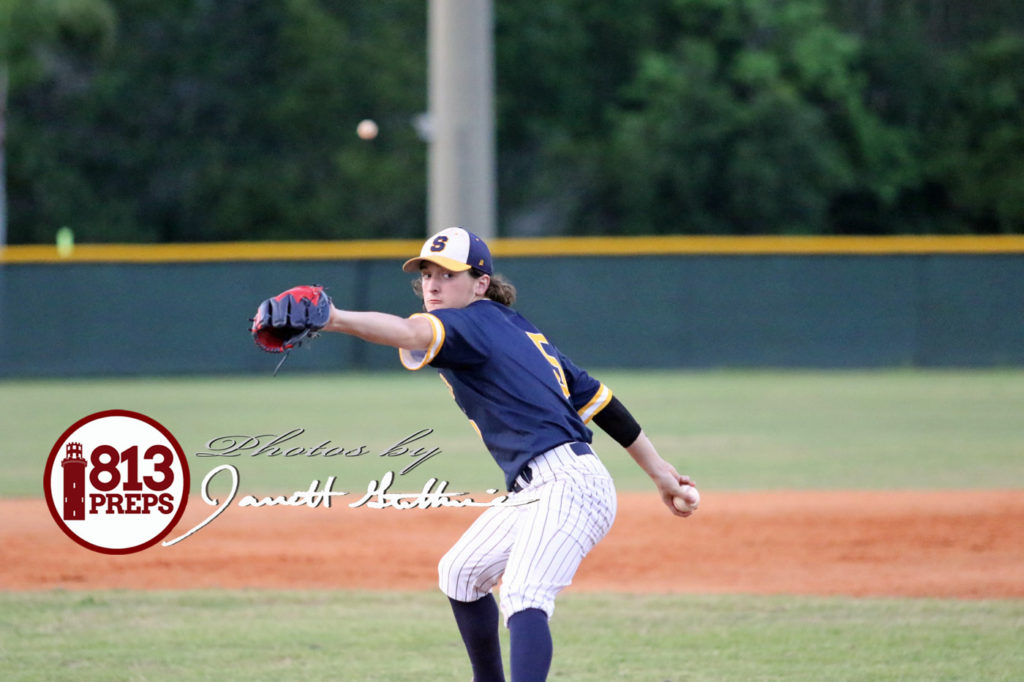 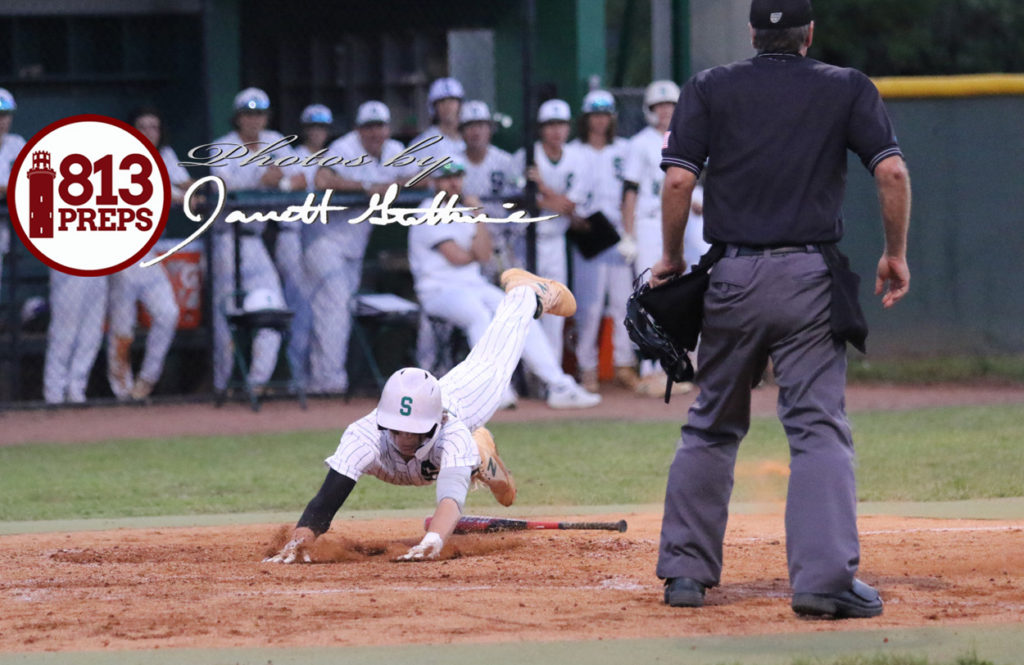 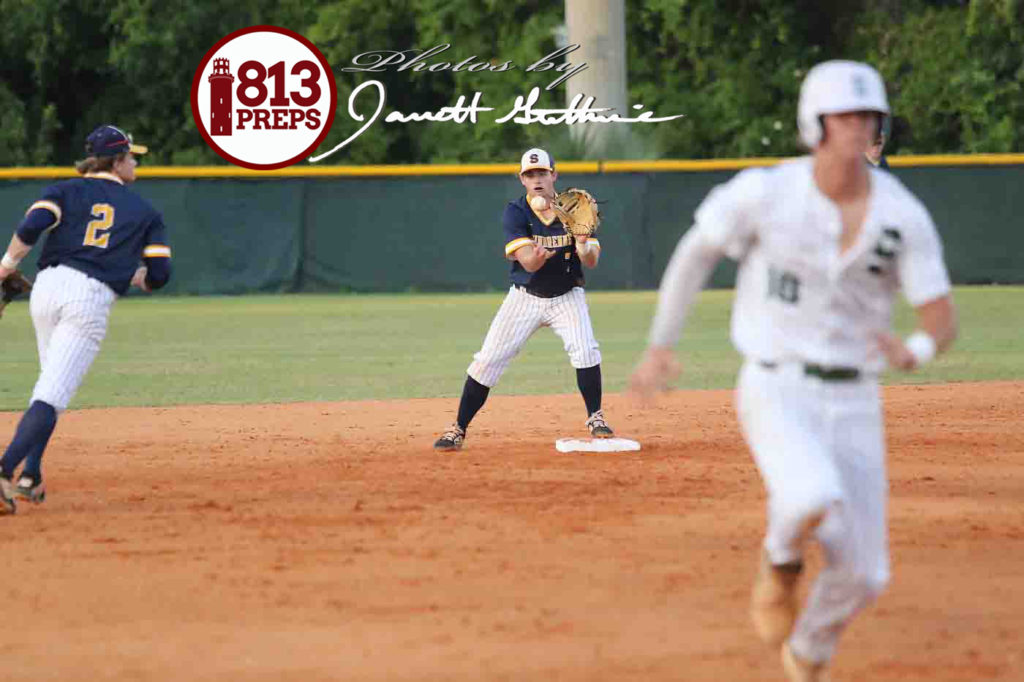 Senior second baseman Tyler Reynolds makes a catch in the middle of a 6-4-3 double-play in the third.