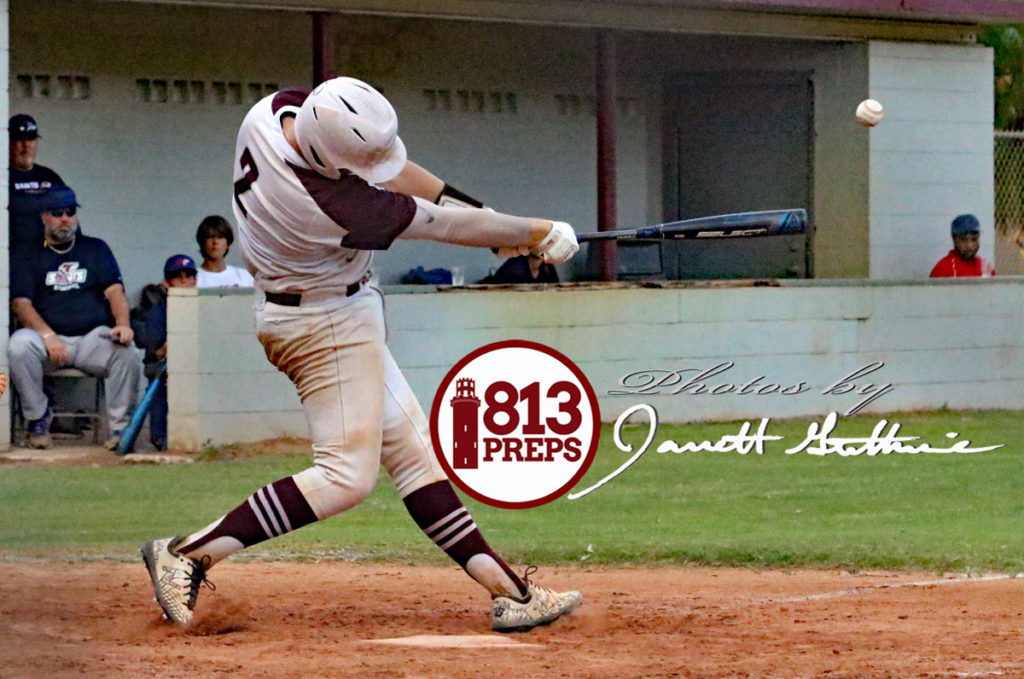 Andrew Ura smacks a three-run double in the first. The senior would three more hits and five total RBIs in the five-inning, district final win.

LAKELAND – Seffner Christian coach Sal Giardina huddled his players after they collected their district trophy and put it plainly. 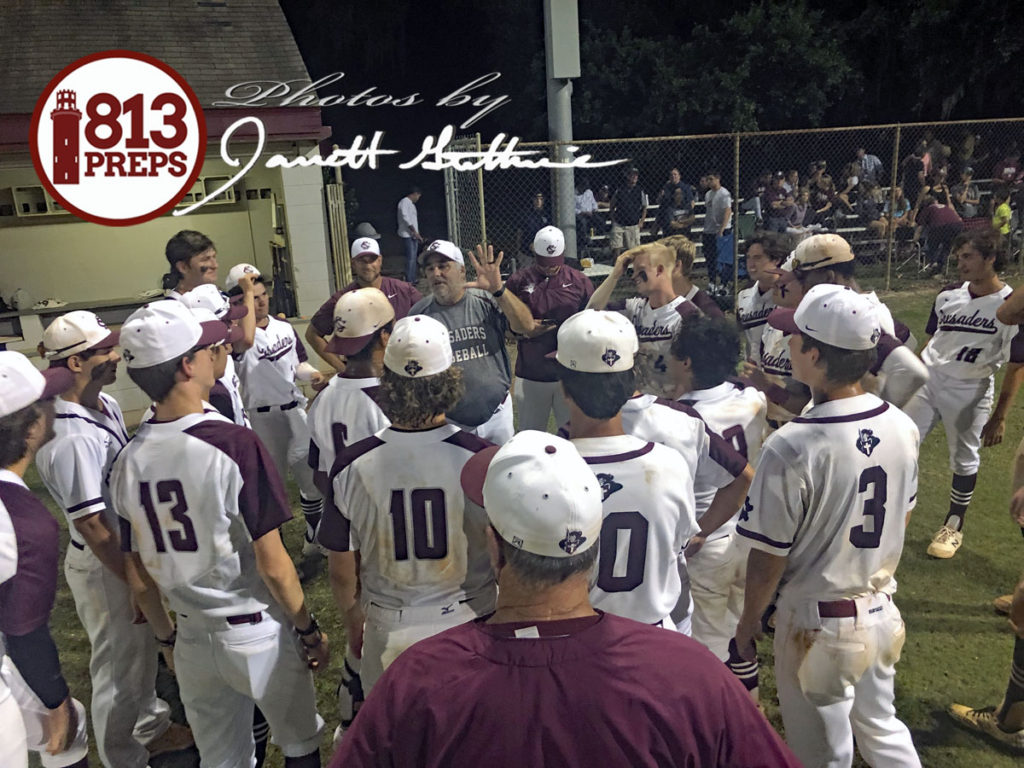 Crusaders coach Sal Giardina holds up five fingers, one for each win it would take for Seffner Christian to win a state title.

“That’s another W in the bucket” he said. “Five more W’s and the buckets full.”

The Crusaders veteran skipper alluding to the win total yet needed for Seffner Christian to claim a state title, and his team let out a cheer of agreement before he finished the thought.

The game itself, was a mere formality from Santa Fe Catholic in Lakeland Thursday evening.

Senior Andrew Ura smashed a ball to deep left in the home-first and said he didn’t think it would get by the Winter Haven All Saints’ left fielder, but the wind, a bit of luck and touch of confusion saw the lofted ball find grass, and swept clear the bases of runners as the Crusaders plated six in the first and swept away the Saints in a five-inning 14-4, district final win.

The three-run double set Ura off on a tear for the duration of the abbreviated game as the slugger tucked his chin on each of his four hits in the Class 2A-8 title game, driving in five and accounting for three more runs scored by runner Josh Siemering, who courtesy ran for SCA’s catcher each time he reached base. 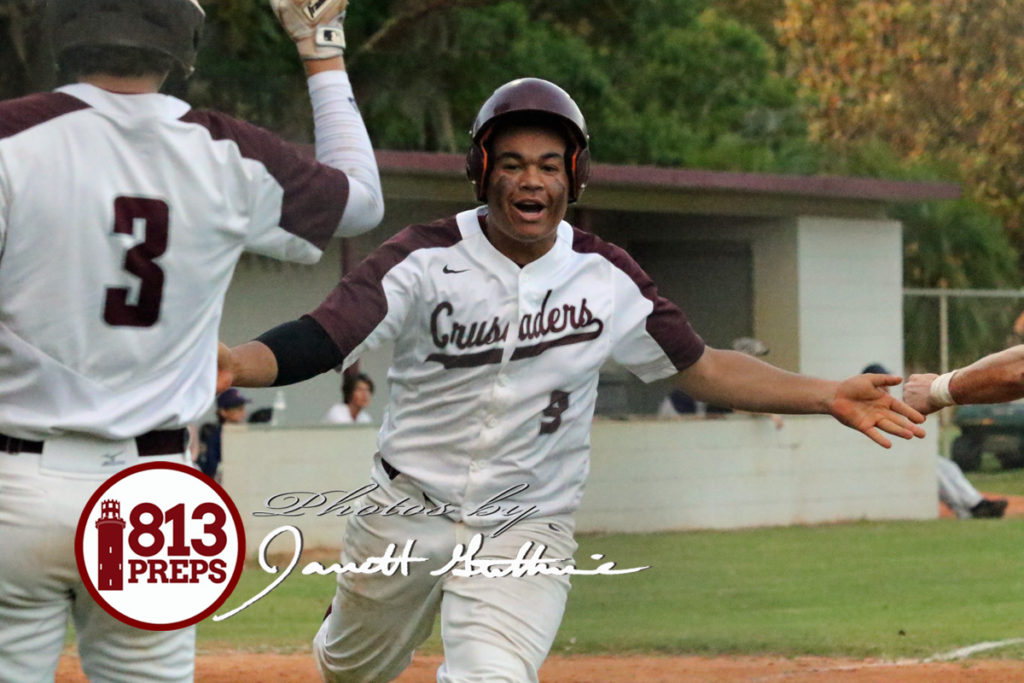 Ura was all smiles after his game, and helping his team claim its first district title in 10 years and two days (last defeating Bradenton Christian for the 1A-8 crown in 2011).

Seffner Christian (16-4-1) continued to add on pushing across two runs in the second, three in the fourth and ending things early with a three-run fifth. 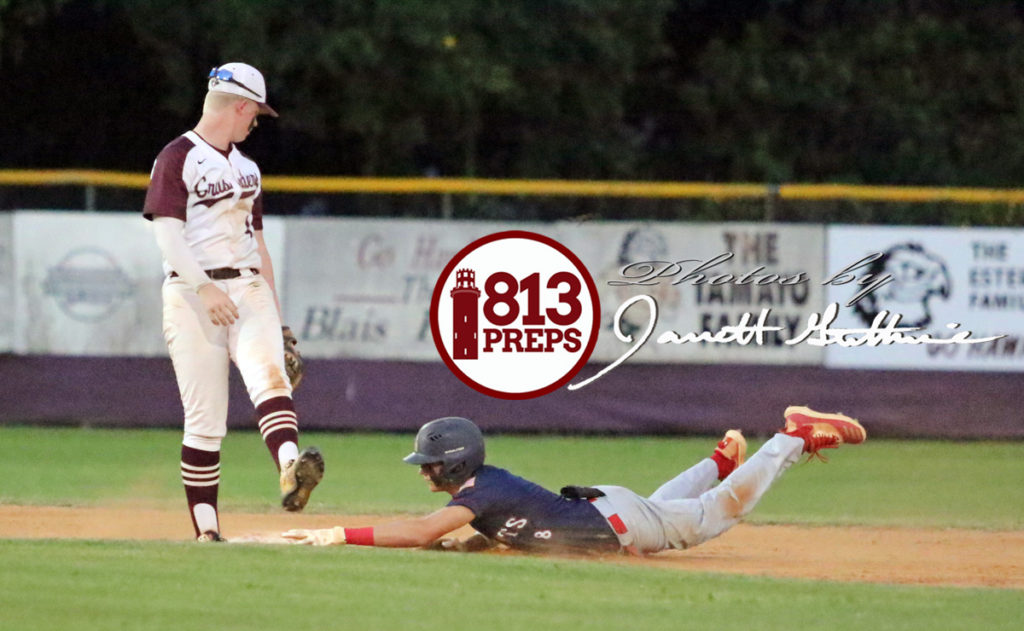 All Saints runner Scott Wellten hugs second base after reaching on a two-base error. 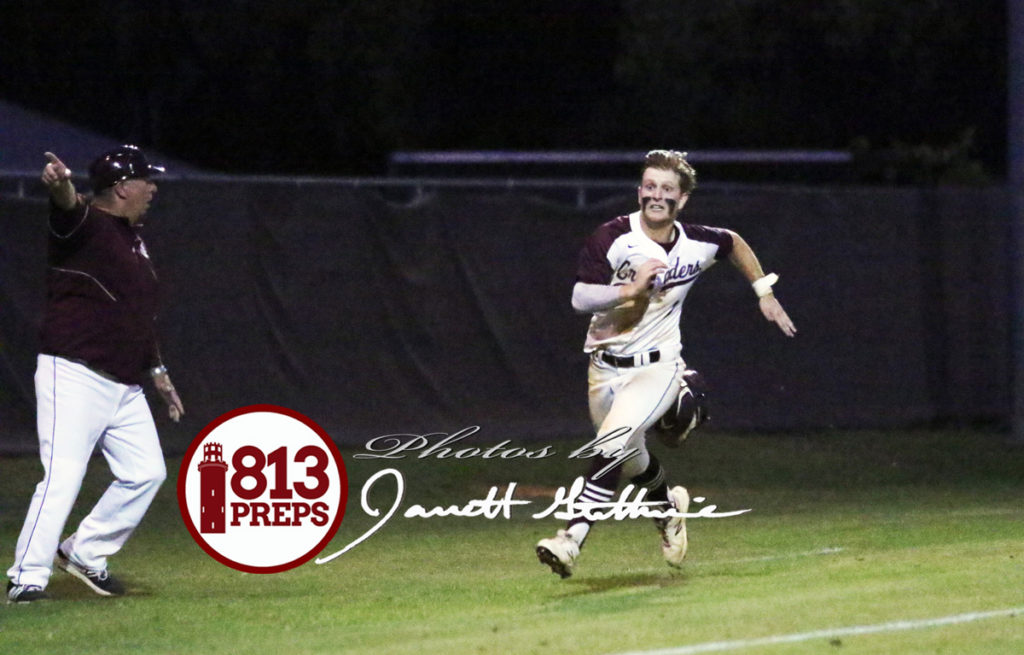 Crusaders senior Clay Odiorne charges around third scoring one of his three runs in the game. 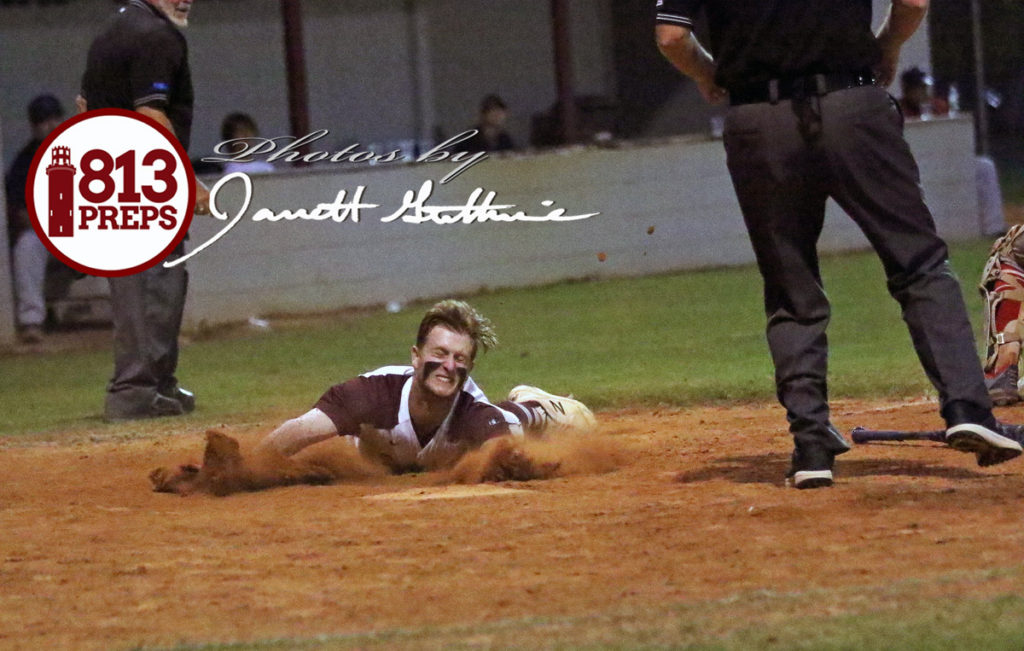 Odiorne dives into the plate in the fourth inning. 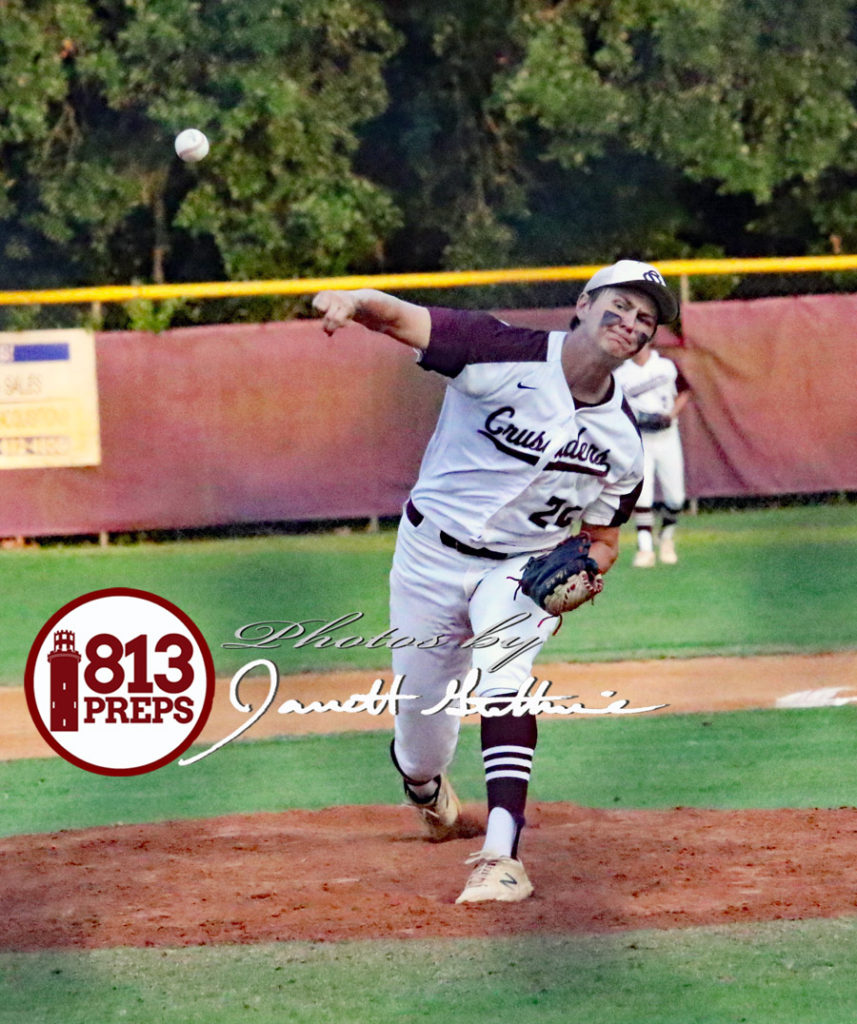 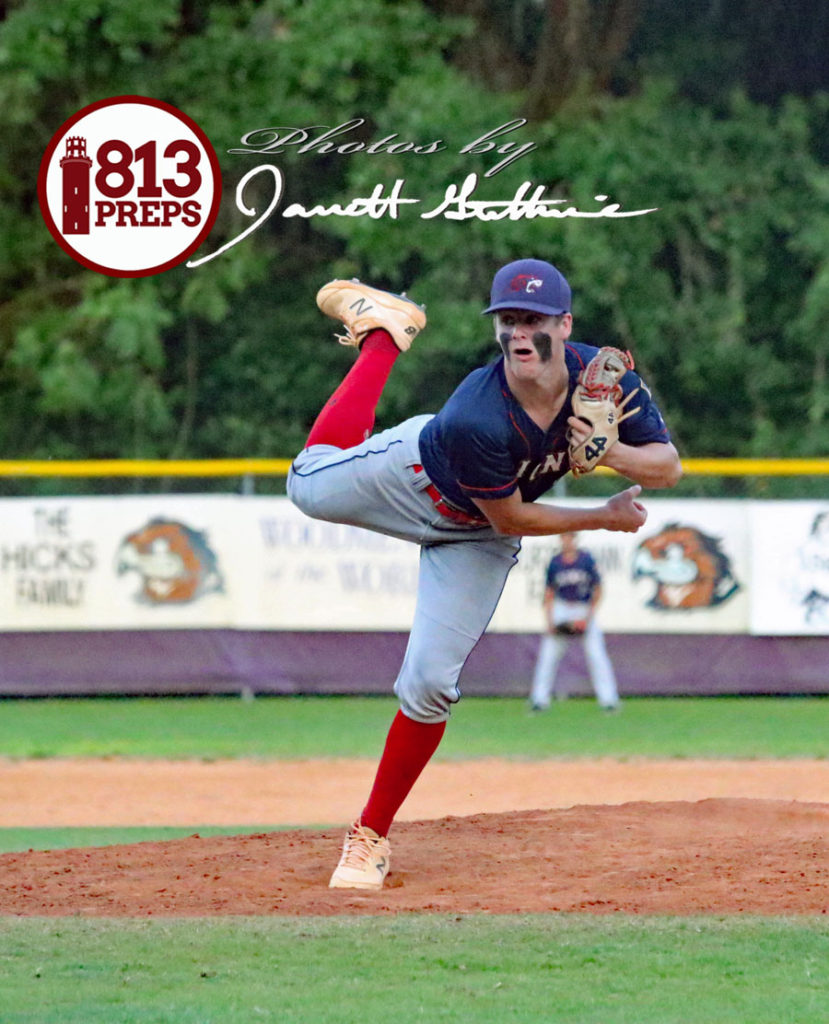 All Saints (15-7) was a bit out-matched on the evening, and the first inning’s onslaught didn’t help, but the Saints did string together a trio of singles in the third inning, the first from senior Riley Kelton, who along with Andy Paul (who walked) scored when Steele Polin singled past a diving Avery Bishop at short. 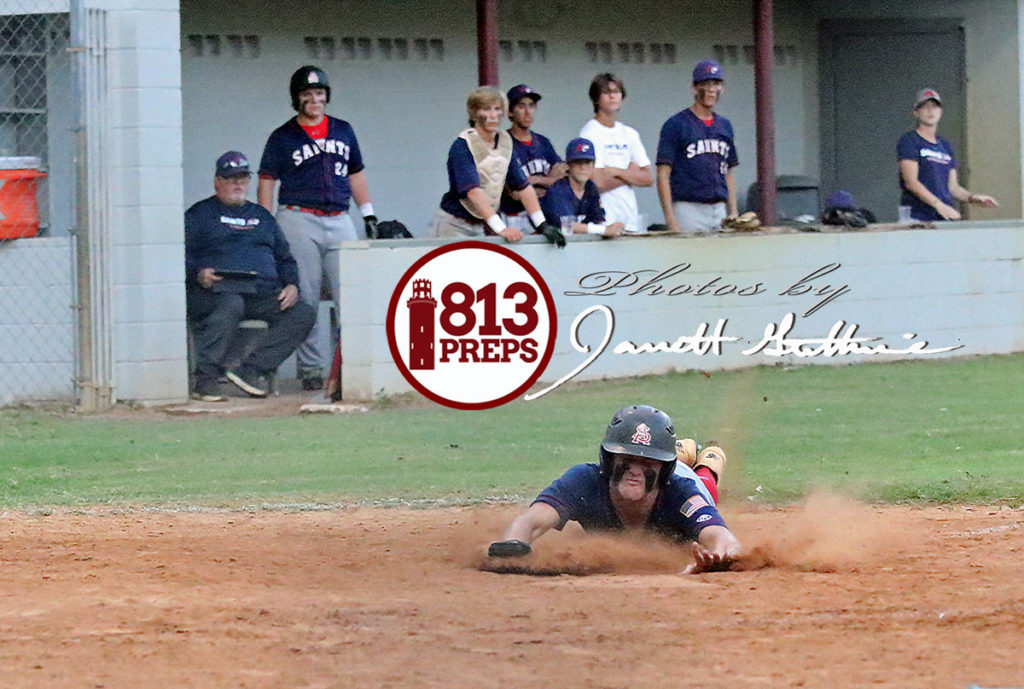 All Saints senior Riley Kelton had the Saints first hit and scored twice.

Bishop though, would end the inning and strand two aboard with an impressive charge of a weak groundball, throwing across his body for the final out of the inning. 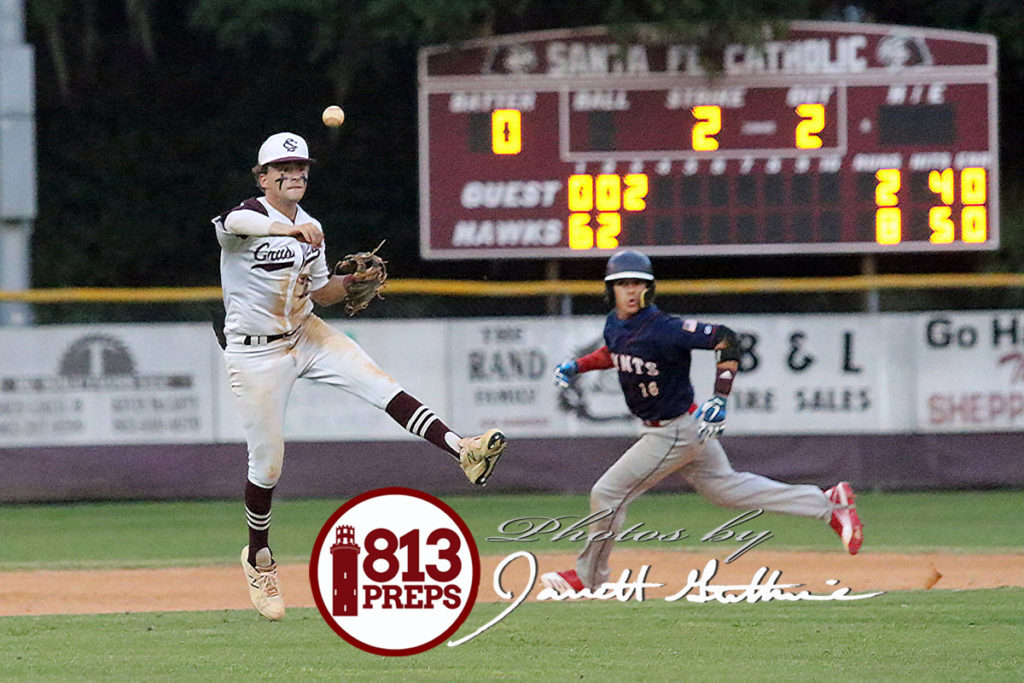 The junior speedster also provided one of the more exciting plays in the final inning, having walked, stolen second and gone to third on the bad throw down, Bishop tagged up on a fly ball to the second baseman and beat the throw home, sliding headfirst on Benny Cheek’s RBI sac fly in the infield and scoring his team-leading 23rd run.

“I don’t think I’ve ever seen that before,” Cheek said. “What it is, is our aggressiveness. If you give us a chance, make a mistake, we are going to use it to take over games.”

Cherry, who had an RBI single in the first, added: “There is a first time for everything. I tried something like that earlier in the season and failed, so it felt good to get it done.” 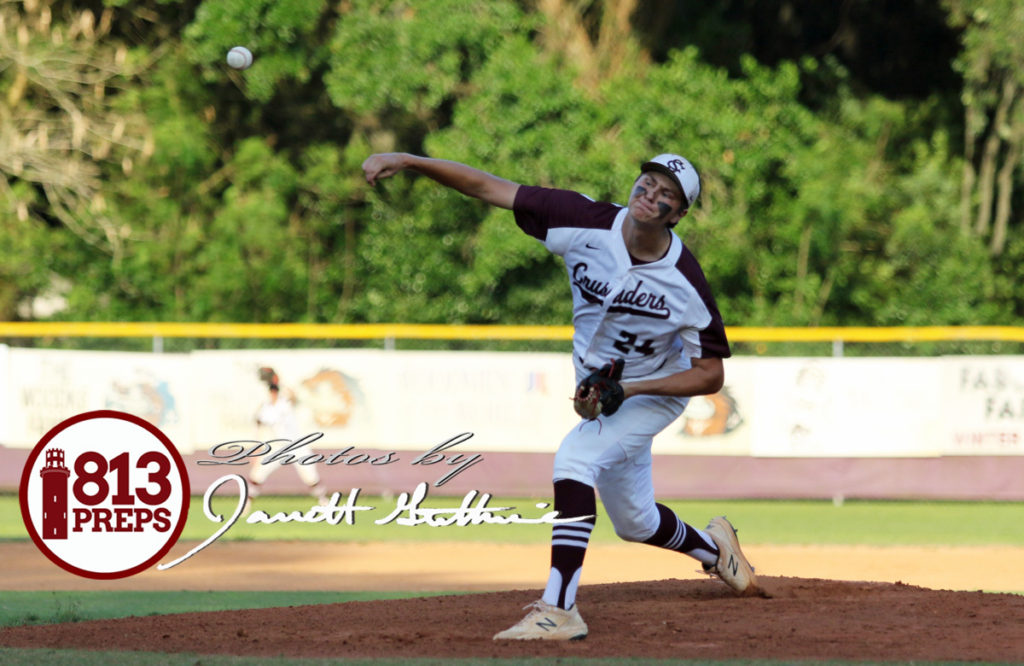 SCA senior righty Dylan Cheeley improved to 4-0 on the season.

Spencer Boynton, who started the Crusaders’ 14-hit night with the first of his two doubles, scored a pair, and Conor Loomis had two hits, two RBI while reaching base in all four plate appearances.

Senior Dylan Cheeley took the mound to start things for the Crusaders and earned his fourth win, allowing four runs on four hits, striking out three.

The righty ran into a bit of trouble in the top of the fifth hitting leadoff batter Kelton and walking Anthony Schatz, before Seffner Christian turned to Cheek in relief. The University of Tampa signee’s first outing on the mound since a bout with Covid-19 started a bit shakily as a pair of wild pitches allowed both runners to score, but he finished off the fifth with three successive outs, punctuated by a strikeout. 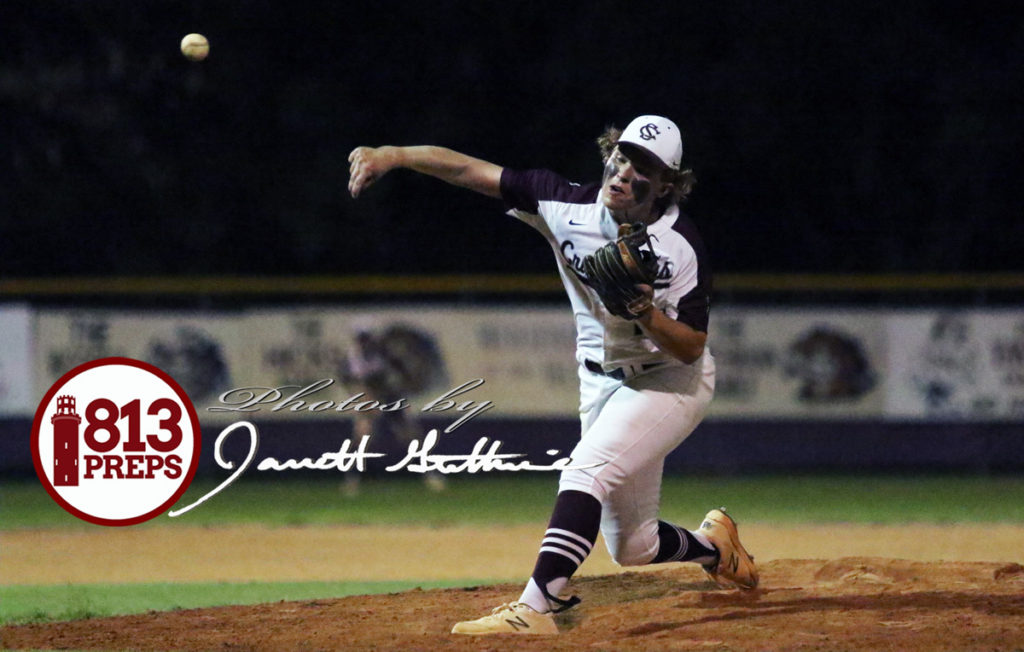 Cheek provided the 12th run on his sac fly, Ura singled in the next and the game ended on a dropped ball in centerfield which allowed Clay Odiorne to score for the third time in the win.

Of the 18 runs scored in the game by both teams, 14 came with two outs, something Ura said was a positive takeaway from the lopsided affair. 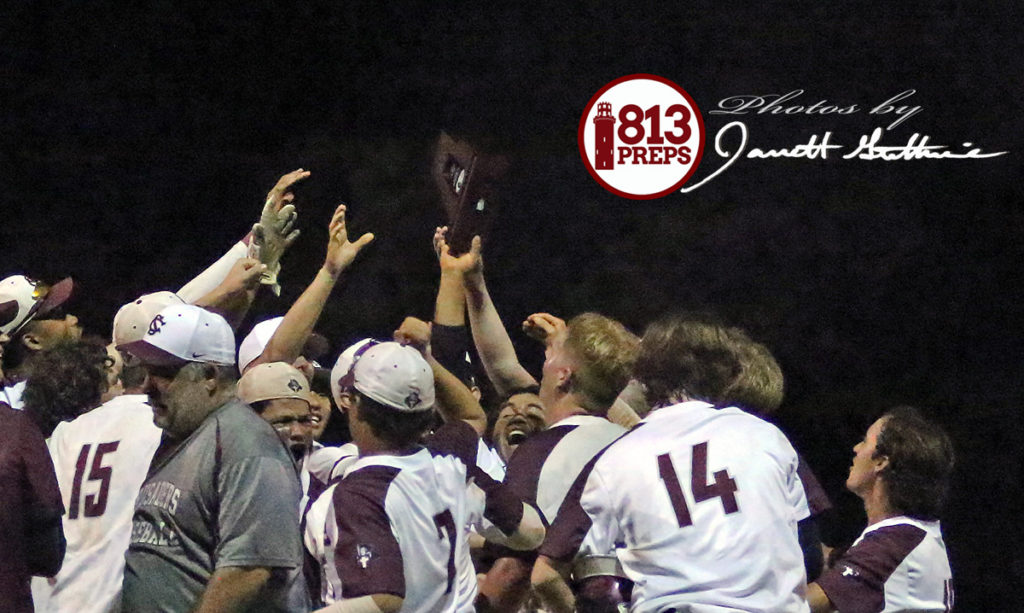