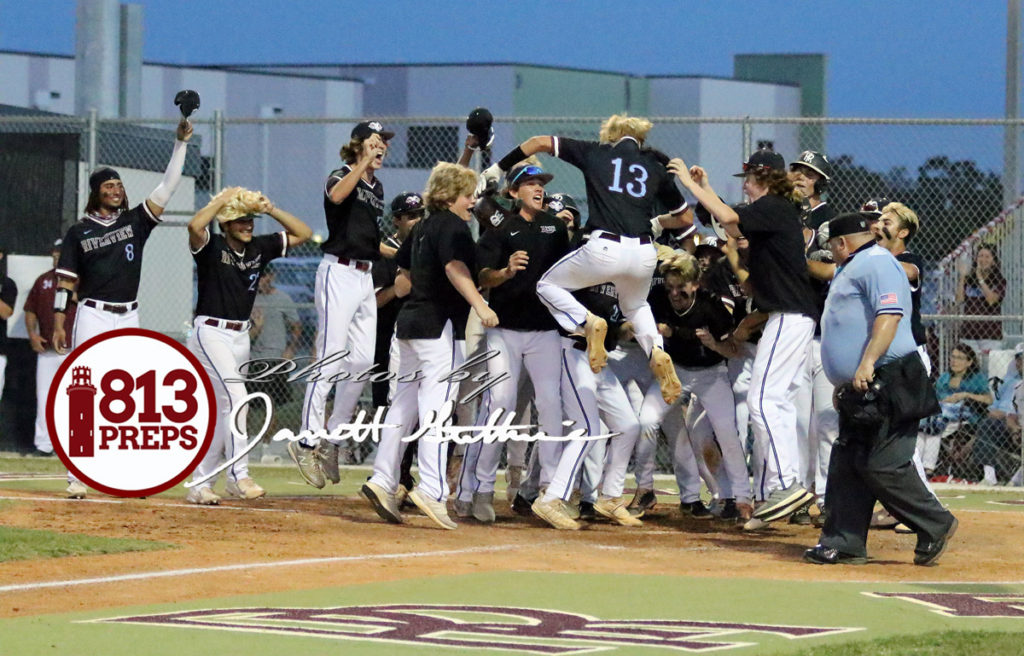 Riverview junior Pip Smalley leaps into the plate and his gathered teammates after his three-run oppo-dinger in the fourth.

RIVERVIEW – The good news is, there is a tomorrow for the Durant Cougars baseball team which advances to next week’s region tournament.

Well, there was a fair amount of that Friday evening as the Cougars dropped an ugly one, 10-0 at Sarasota Riverview in the Class 7A-District 8 final where the Rams put away Durant in six innings behind a shutout performance on the mound from senior righty Karson Ligon.

The game in a nutshell from Cougars coach Butch Valdes: “If you can’t get a hit, you aren’t going to win.” 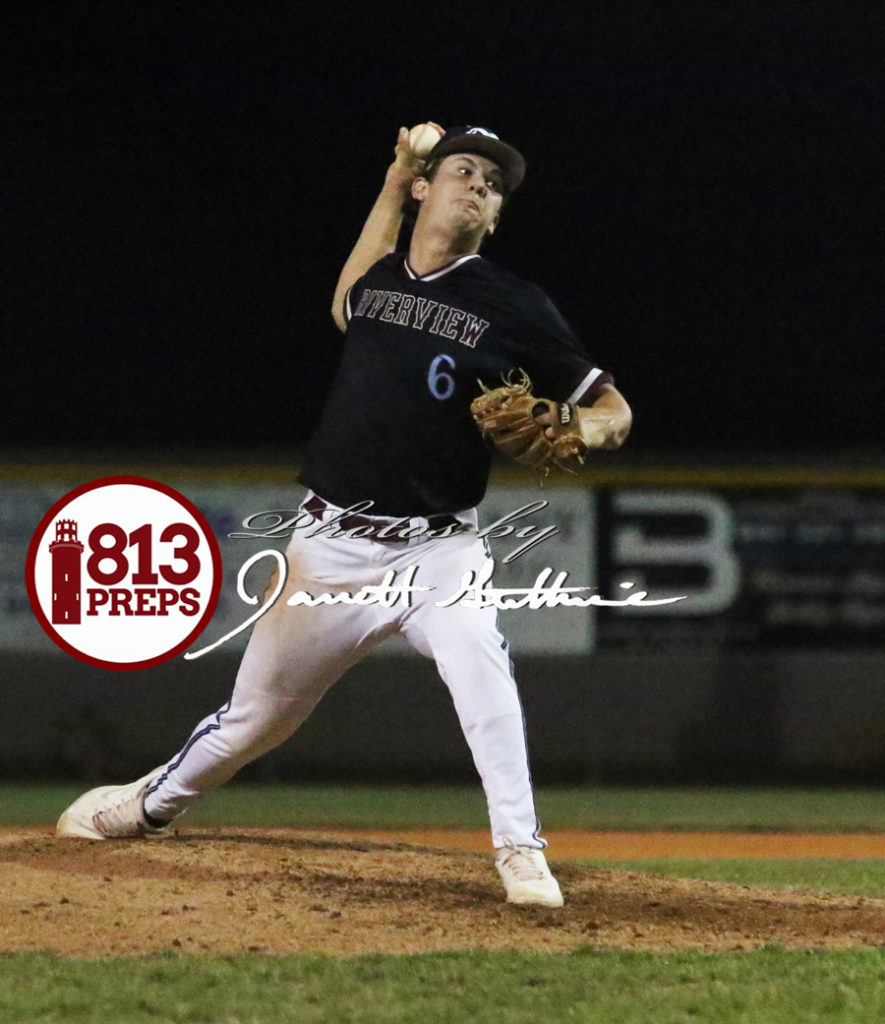 The Cougars struggled at the plate against the Miami-signed Ligon for the duration, as the Rams booked a home game for the region quarterfinal next Friday, where it will host Sickles.

Ligon had at least one strikeout an inning, finishing his night with 10 working a strong fastball clocked by scouts in attendance up to 93 MPH and finishing a number of his K’s with a slider.

“Karson went out there and attacked one batter at a time,” Rams coach Jeremy Schmidt said. “Our pitchers – bullpens, flat-grounds, whatever it is – we preach competing and he did that all night.”

Despite recording just three hits in the game, Durant did have the night’s first hit with a one-out, second-inning double from senior Javy Quintana. But Quintana stayed in place as Ligon struck out the next two he faced. 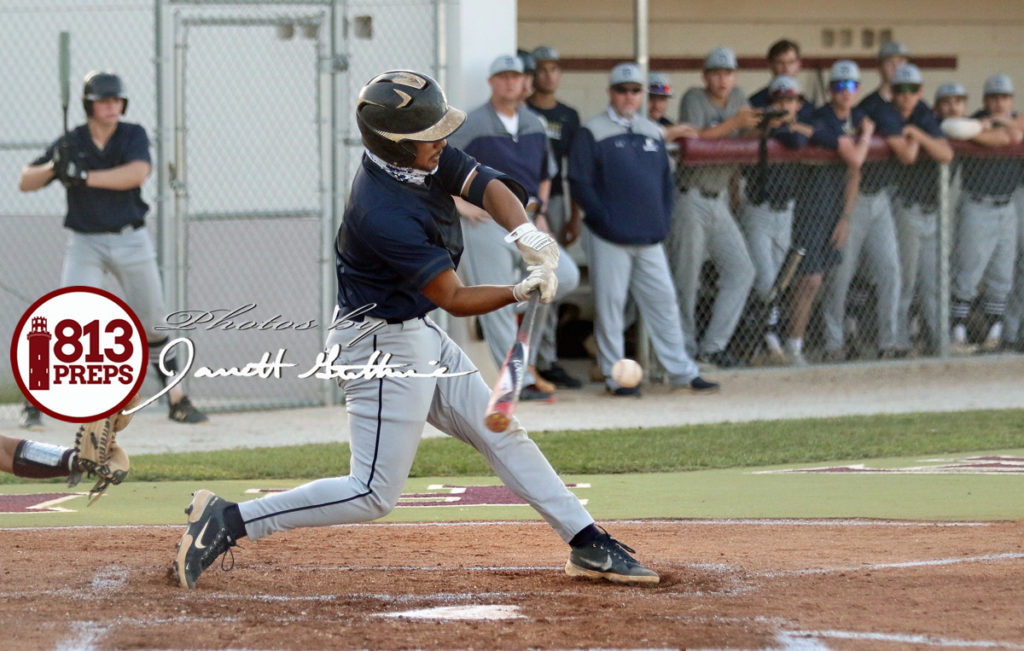 Sarasota Riverview (18-9) got all it would need in the home-second when Carter Knight and Dylan Wilds slapped RBI singles to give the Rams a two-run advantage. 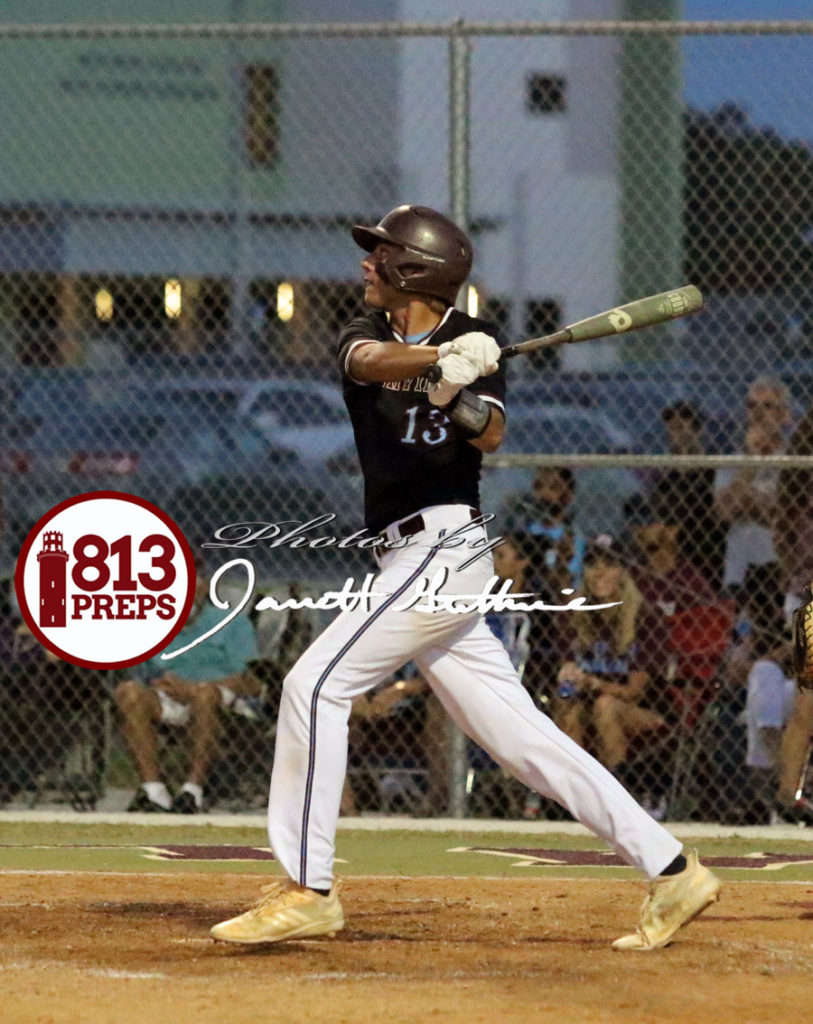 Smalley steals a peek as his big fly sails to right field.

The big boost to the Rams night came two innings later when junior Pip Smalley smacked a ball high into the air the opposite way and it sailed over the fence in right field for a three-run homer.

“Pip Smalley has been our guy all year, he’s been lights out,” Schmidt said. “Pitching, hitting, he is just so dialed in. He’s a gamer who lives for this type of moment.”

Smalley, a Stetson commit, would pick up another hit in the sixth inning, singling in Jakobi Davis with a ground ball through the left side to end the game an inning early by mercy-rule.

Durant (19-5) put together back-to-back hits with two outs in the top of the sixth, on a line drive single to center by Dean Hotz, who advanced to third on a similarly centered double by Austin Sewell, but the two in scoring position weren’t cashed in as Ligon (5-2) finished his fourth inning with a strikeout.

“Our guys kept fighting, there was some positive stuff,” Valdes said, quickly looking ahead in the postgame. “Now we’ve got a week off, we’ll regroup. We will be back.”

That path goes through a region quarterfinal showdown next Friday against the 7A-7 champ Wharton, which defeated Sickles 4-1. 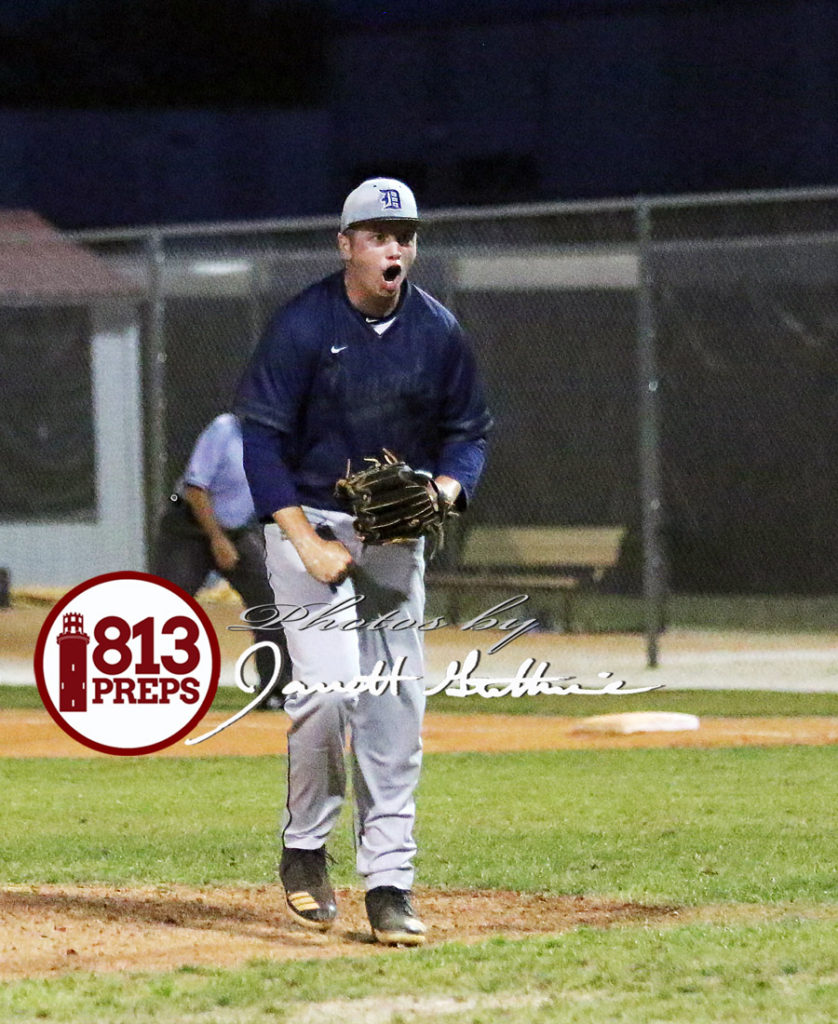 Alex Canney was expectedly excited after finishing his first inning of the season with a strikeout. The senior missed the entirety of the regular season due to an ankle injury.

One positive note for the Cougars in the game came in the fourth, when senior Alex Canney entered the action for the first time this season. Canney, a University of Tampa signee, has been sidelined all season with an ankle injury, but was called to the mound with a runner on first. He was greeted with an RBI double by Clay Russin (3-for-4), but got him out at third on a ground ball to the left side, picked a runner off second and finished his first inning with a strikeout. Canney worked two innings, allowing just the one hit and striking out two.

“We saw that Canney’s back,” Valdes said, “and he can give us an inning here and there, so that will be nice for us moving ahead.”

This marks the first district title for Sarasota Riverview since 2015, and the first in Schmidt’s four-year tenure.

“This is my fourth year with this program,” he said. “These are my seniors and they have just absolutely battled, so has our coaching staff.”

But Schmidt also acknowledge his team got the type of win that will be tough to duplicate moving forward.

“We’ve got a long stretch ahead of us,” Schmidt said, “and Durant is a really good team, I wouldn’t be surprised to see them again.” 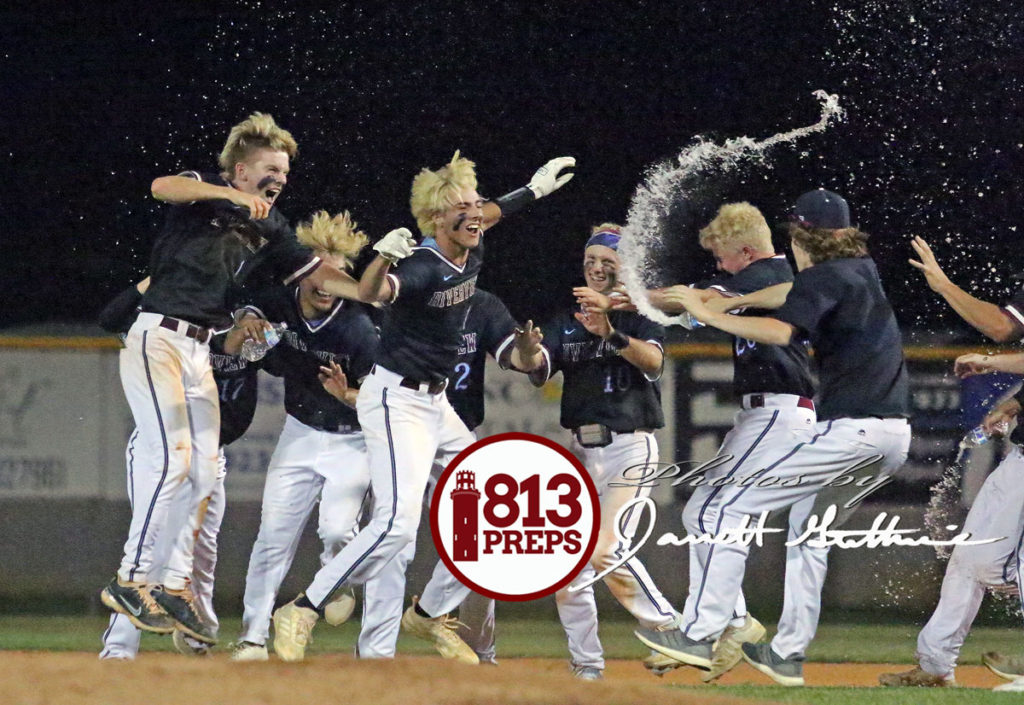 Smalley (center) again in celebration after ending the game early with an RBI single in the sixth. 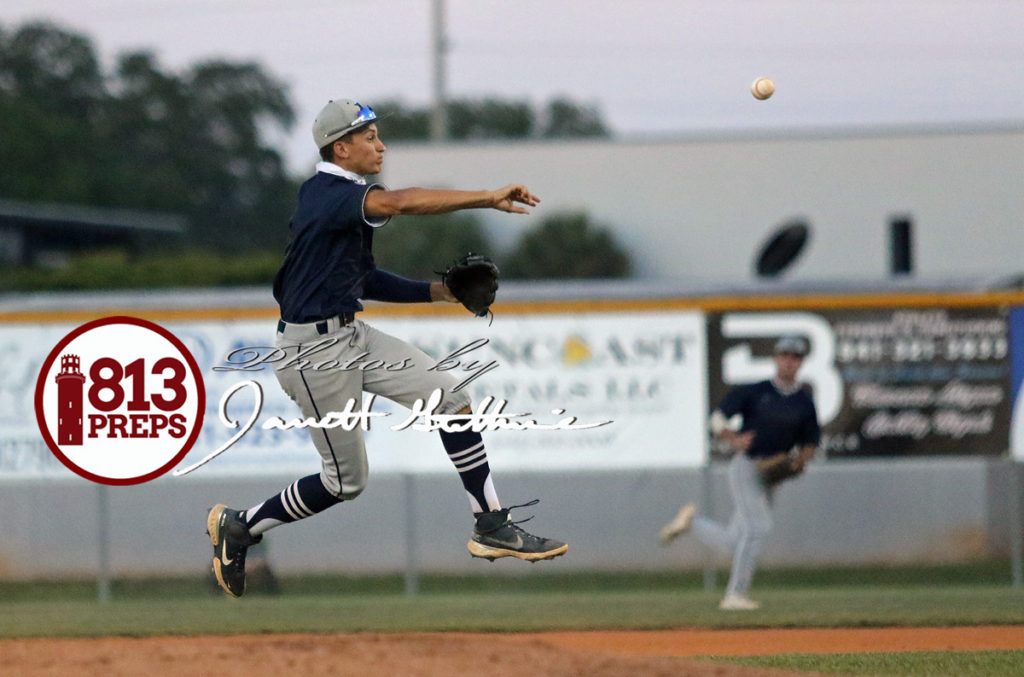 Durant 2B Oscar Fernandez makes a throw in the third. 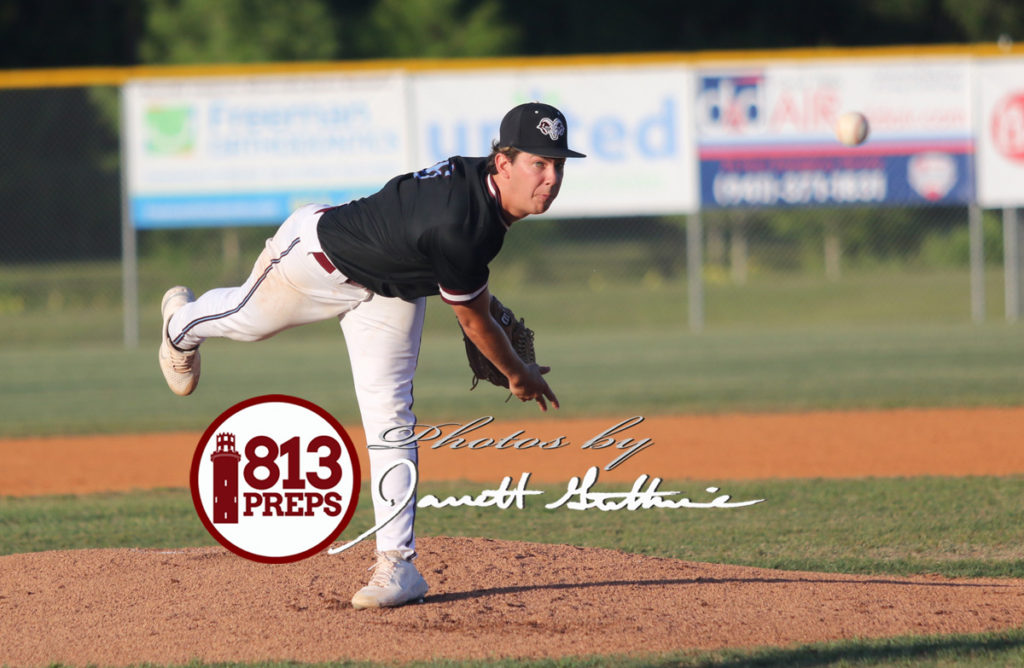 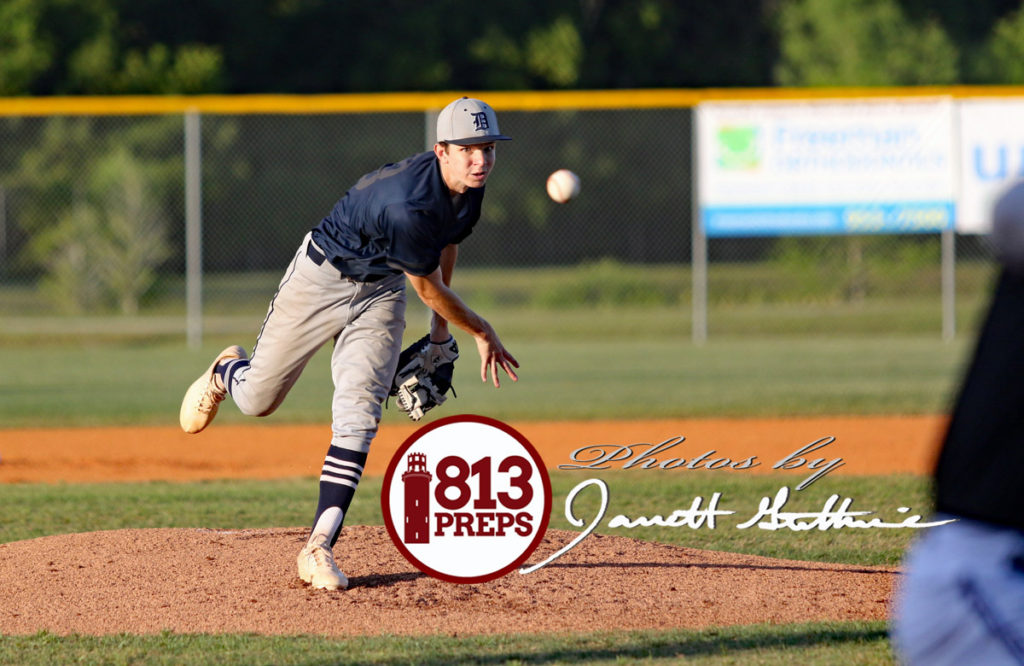 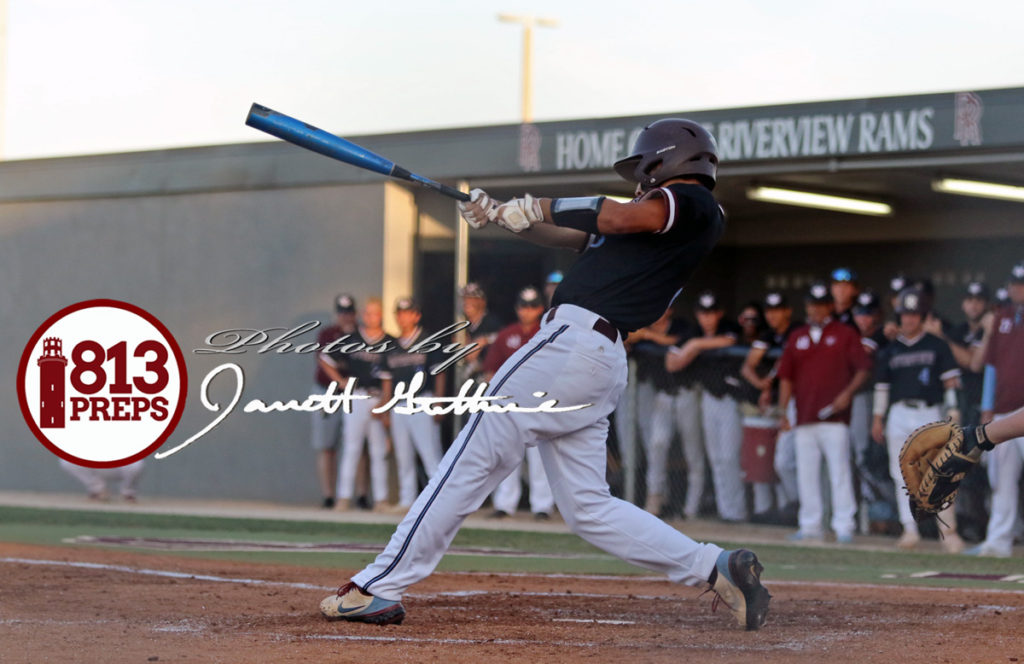 Rams senior Carter Knight singles in the game-winning run in the second. 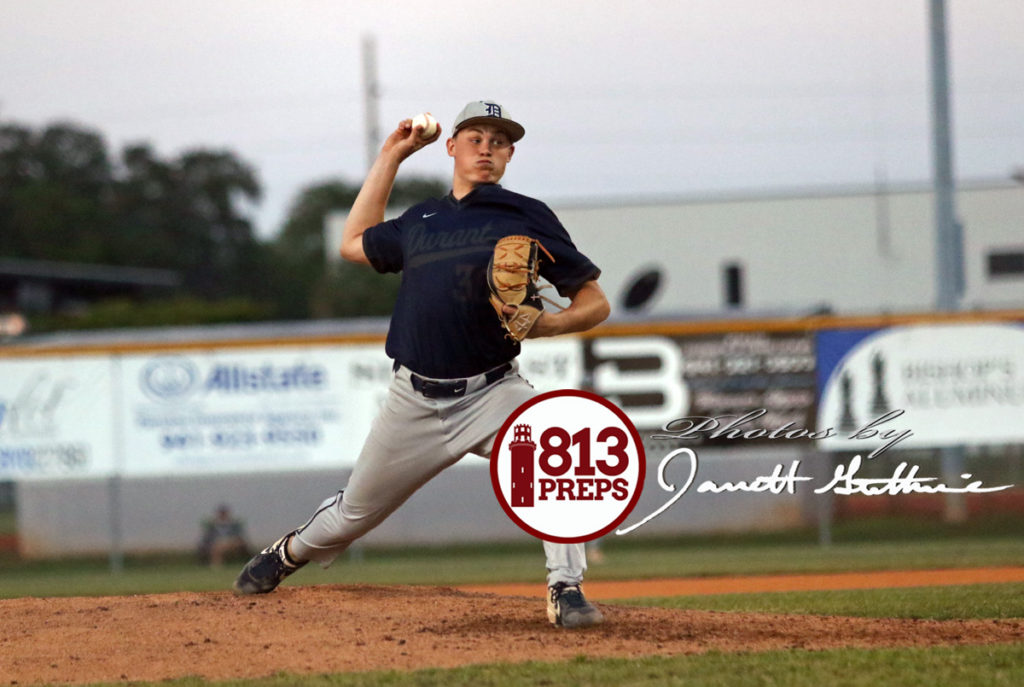 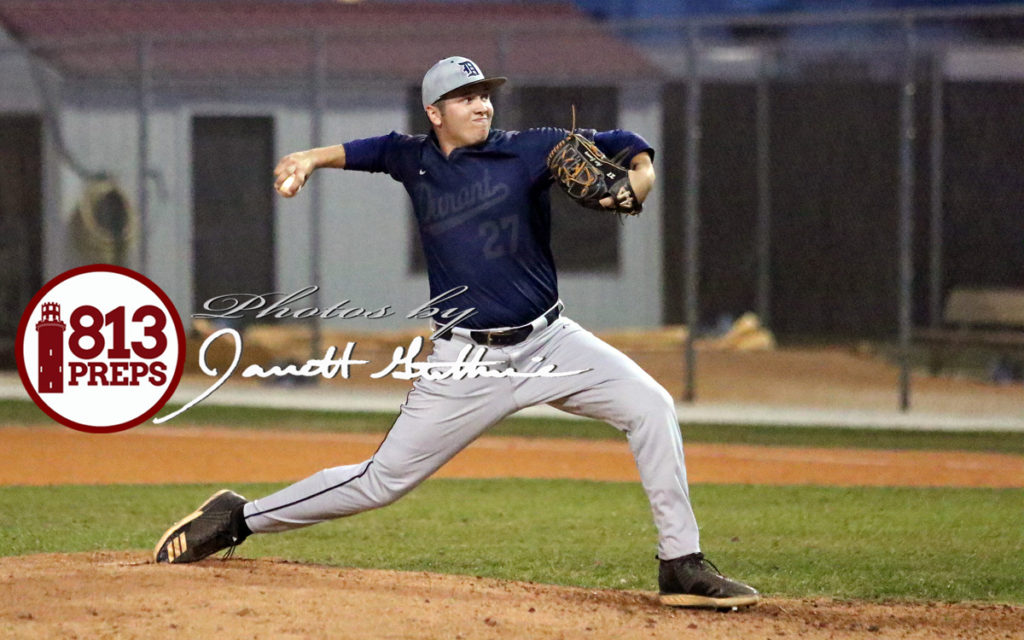