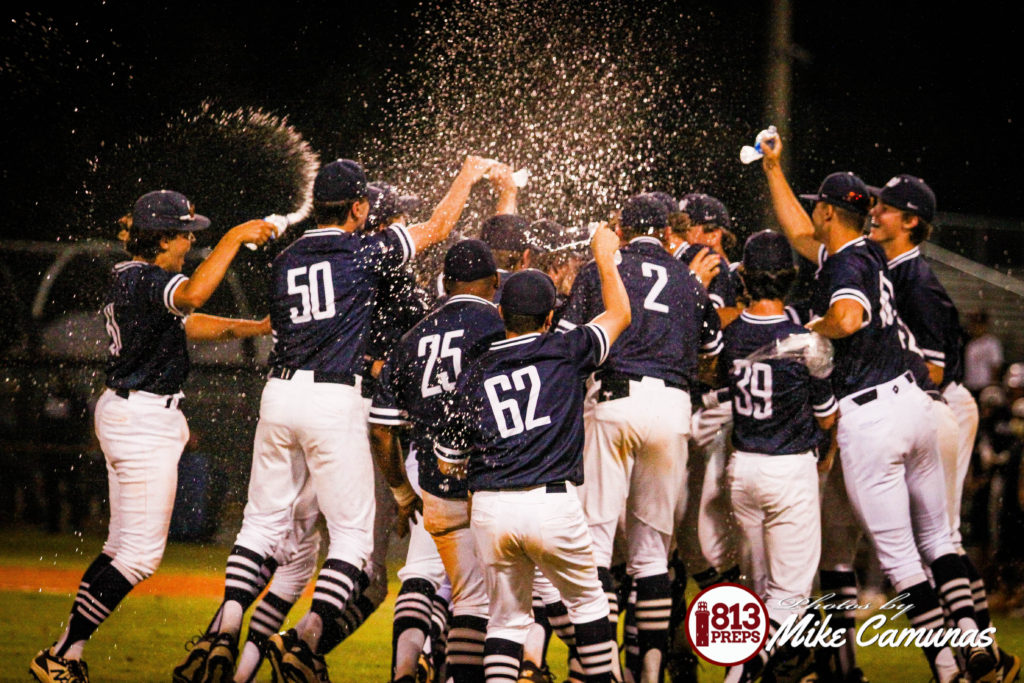 And not just because he needed it for when the Wharton Wildcats had a celebratory team water bath when they clinched the 7A-7 title with a 4-1 win over district foe Sickles on Friday night.

“I tell everyone,” Wildcats coach Scott Hoffman told us after the game, “that this guy (Chrest) is good. He gets up there and he deals. He must have ice water in his veins because that fourth inning … it was his to lose.” 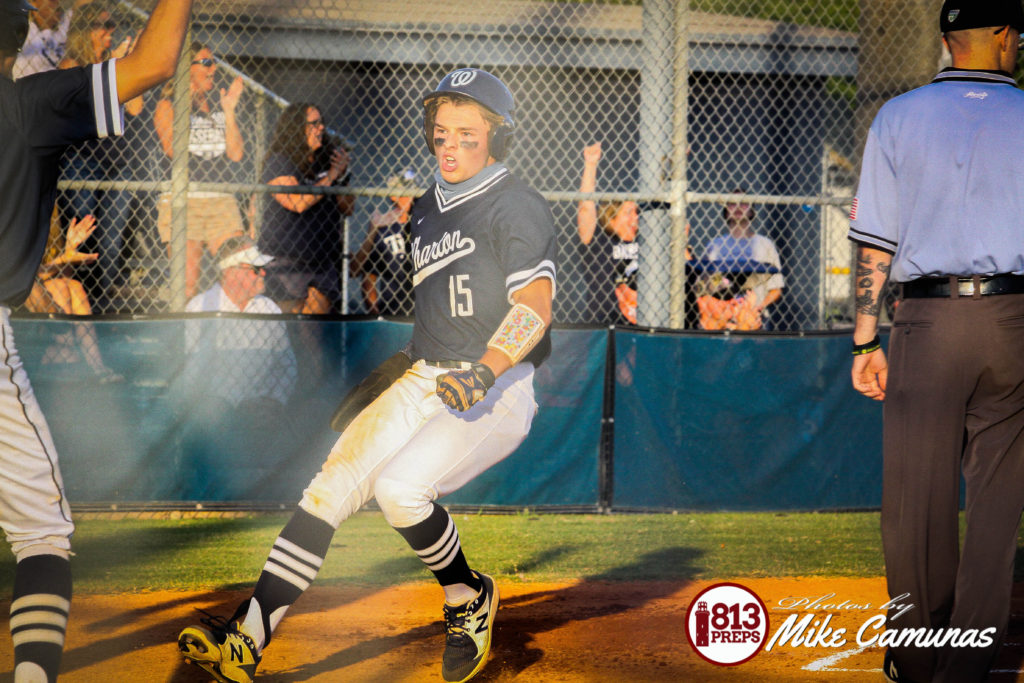 Indeed, things could’ve unraveled fast for the junior righty, who found himself in a pitcher’s worst nightmare in the fourth inning: bases loaded, nobody out. Instead, Chrest turned it into a pitcher’s most desired dream: dealing three swinging strikeouts to Justin Allen, Brandon Dessi and Hayden Yost, respectively, to maintain the lead the Wildcats built in the first three innings.

“All I was thinking (in the fourth),” Chrest said, “was I can’t let anyone score, but I ended up striking everyone out! It just felt like everything was working for me tonight and I felt really good out there (on the mound).” 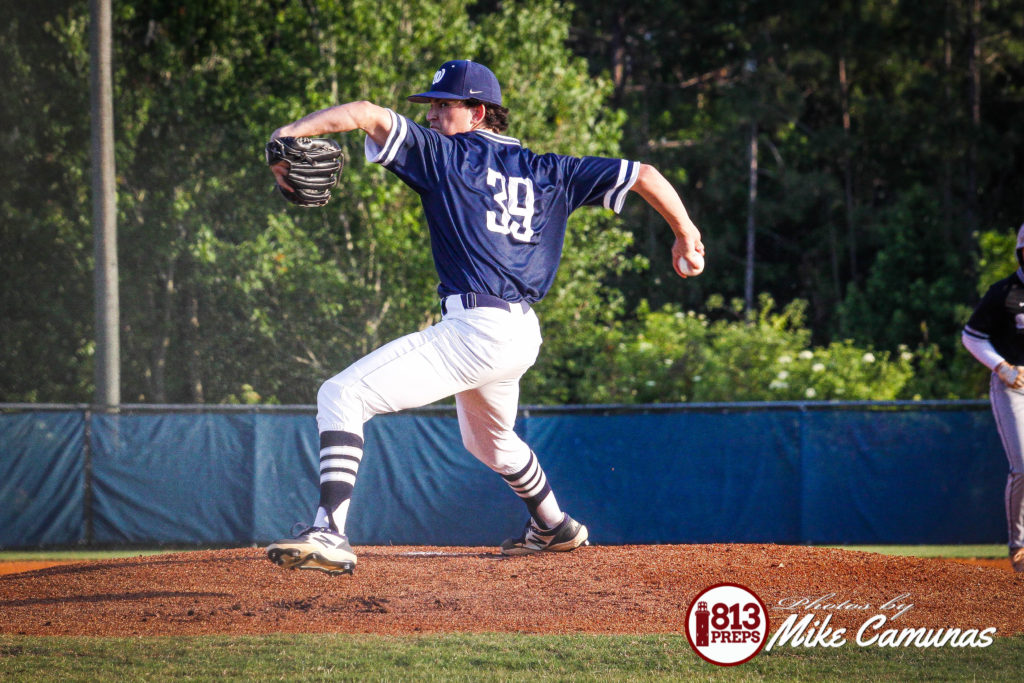 Wharton junior Evan Chrest struck out 10 in six innings, allowing just five hits and earning his 8th win of the season as the Wildcats won the 7A-7 district title.

“When he is locked in,” Wharton shortstop and Oklahoma State commit Zach Ehrhard said, “you can’t shake him. Bases loaded with nobody out?! That’s as scary as it gets on the mound, but that’s Evan: he’s even keel, shows no emotion and goes out there and gets it done.”

On the other end of that inning, it was the Gryphons’ best chance to wipe out the Wildcats’ lead, yet that huge, but missed opportunity would ultimately come back to haunt Sickles (15-9).

“Yeah, that’s the one that hurts,” Sickles coach Eric Luksis said, “because that’s what these games come down to and it’s the team that gets the big hit when you have that situation like that, the bases loaded, no one out.

“That’s a really good baseball team and you have to play extremely well to beat them and we’ve played them three times and it’s been a dog fight all three times. (Tonight’s loss) is tough because we have 12 seniors we would’ve liked to have sent off with a district championship.”

It did seem as though Sickles, which, with Wharton (21-4), has combined to score just nine runs in those three close games this season, might do just that, as it pounced early on Chrest by scoring quickly. First, Adrian Gutierrez would walk, Kohl Robertson would double to push him to third and Chase Conville would bring home Gutierrez on a fielder’s choice for what ended up being Sickles’ lone run. 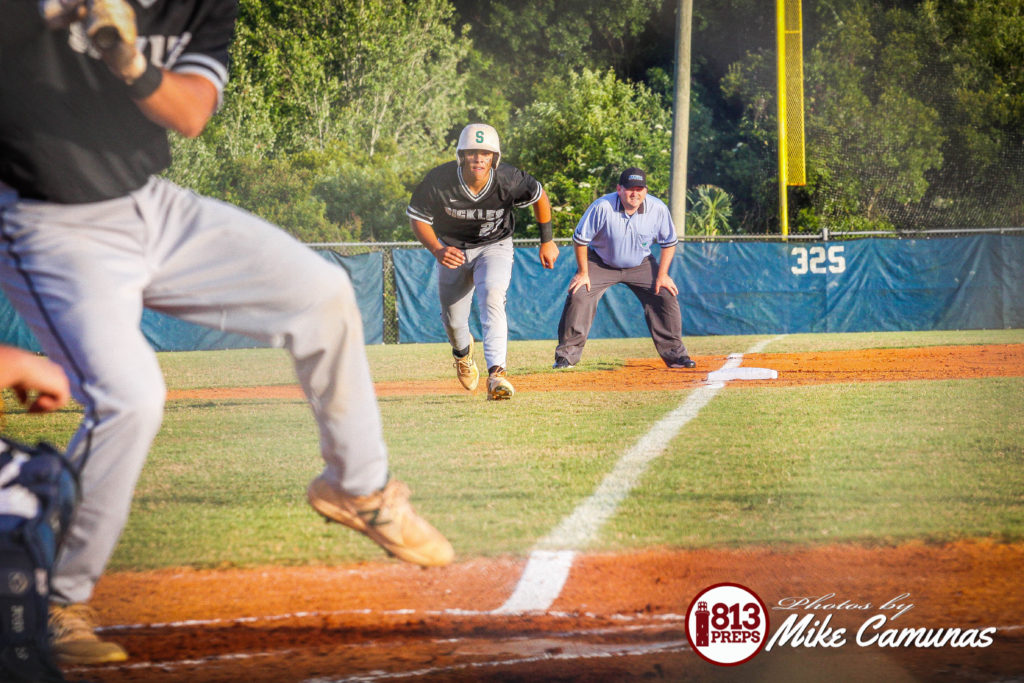 Sickles senior Adrian Gutierrez takes his lead off of third base. Gutierrez would score the Gryphons lone run in the first.

Though Wharton would answer right back and take advantage of shaky starter, Davian Garcia, who would open the game by hitting Dylan McDonald with a pitch. Ehrhard would pull back a bunt attempt and then double off the centerfield wall and score McDonald easily. Elijah Dukes would bring home Ehrhard on a sac fly, and Billy Eich would drive home Henry Griffith, who was the courtesy runner for catcher Frank Micallef, who singled. 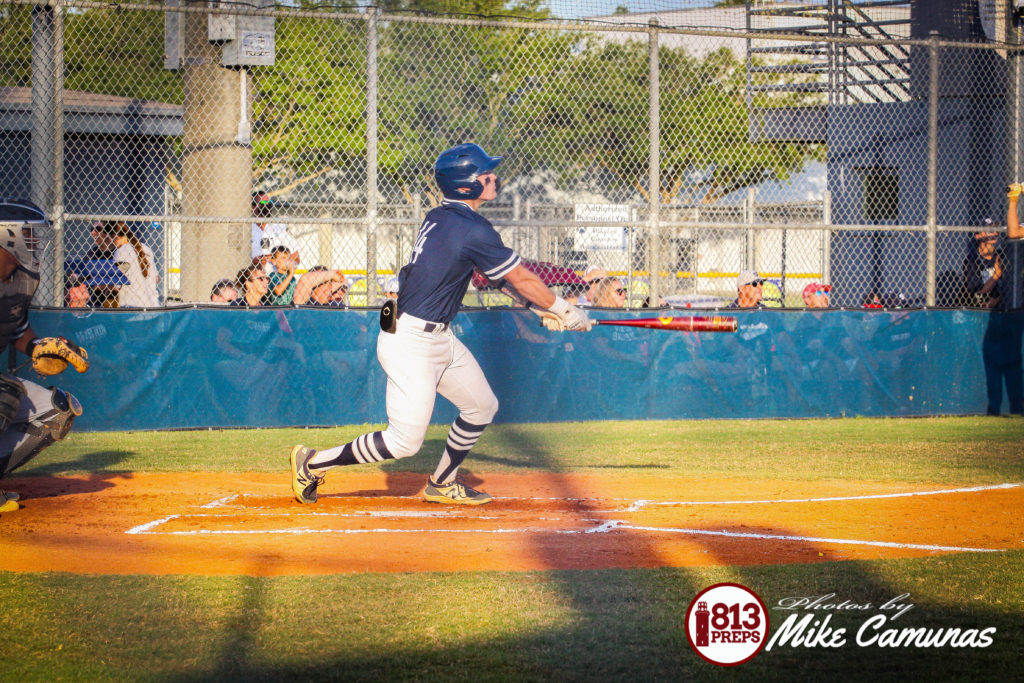 Wharton senior Zach Ehrhard doubled in a run in the first innings. Ehrhard also had three walks in the game.

This would knock Garcia out of the game, and he was replaced by Bobby Christy, who would pitch the rest of the game: 5 1/3 innings, giving up just two hits, an earned run, six walks, but also struck out eight.

Postgame interview with @Whartonbaseball’s and @OSUBaseball commit @Zach_Ehrhard on what it means for him and the 10 other seniors to take home the 7A-7 title (and also how @echrest18 dealt all night) @813Preps pic.twitter.com/isWtsvv4dH

Even as Wharton would add another run in the third — an RBI double by Quentin Meadows that scored Dukes — it was Chrest, who became lights out after his high-wire, daredevil act in the fourth. Before giving way to senior, Jackson Perkins, who picked up a hard-earned, 23-pitch save in the seventh, Chrest would impress even further.

First, Chrest would induce a 5-4-3 double play in the fifth, but then how did he cap off his 97-pitch clutch outing, which resulted in him improving to 8-1 on the mound this season?

No big deal really, he just struck out the side in the sixth, as well.

“It just all came together,” said Chrest after the game, ice pack strapped to his right shoulder to, obviously, keep the aforementioned ice water in his veins nice and icy, “and it all just felt really great out there.”

Postgame interview with @Whartonbaseball’s @echrest18 following his 10K performance to guide the Wildcats to the 7A-7 title. @813Preps pic.twitter.com/626fuqleIo 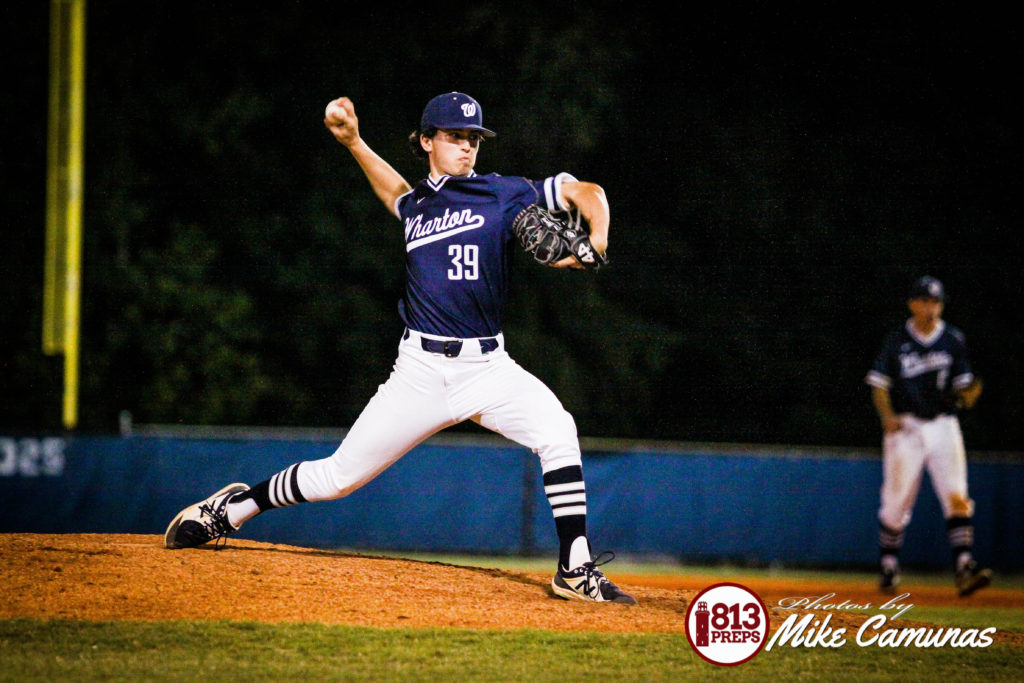 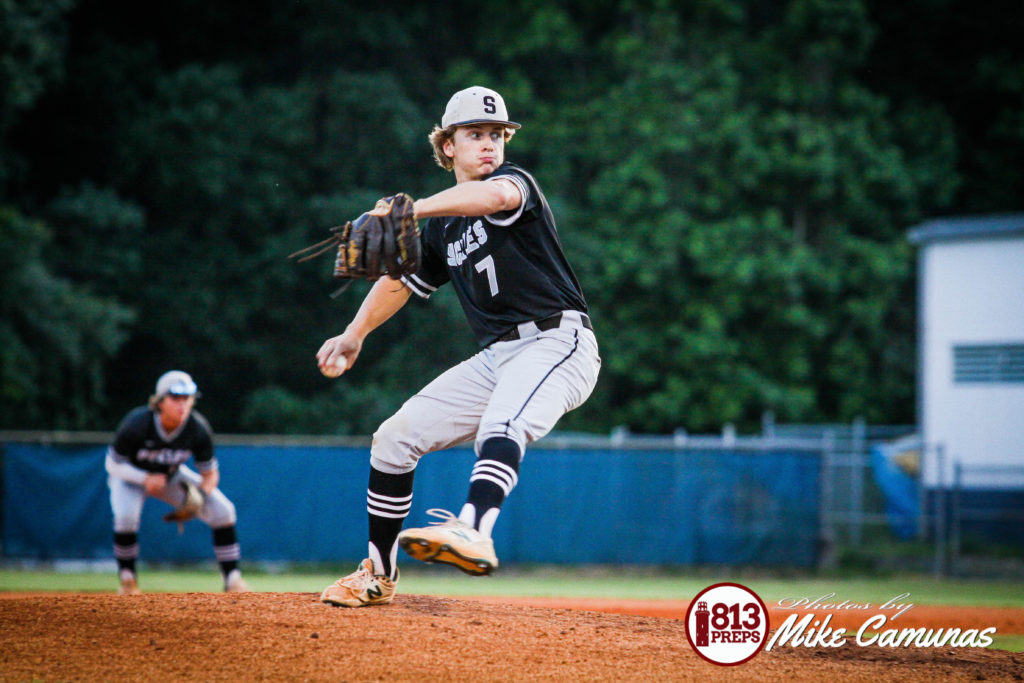 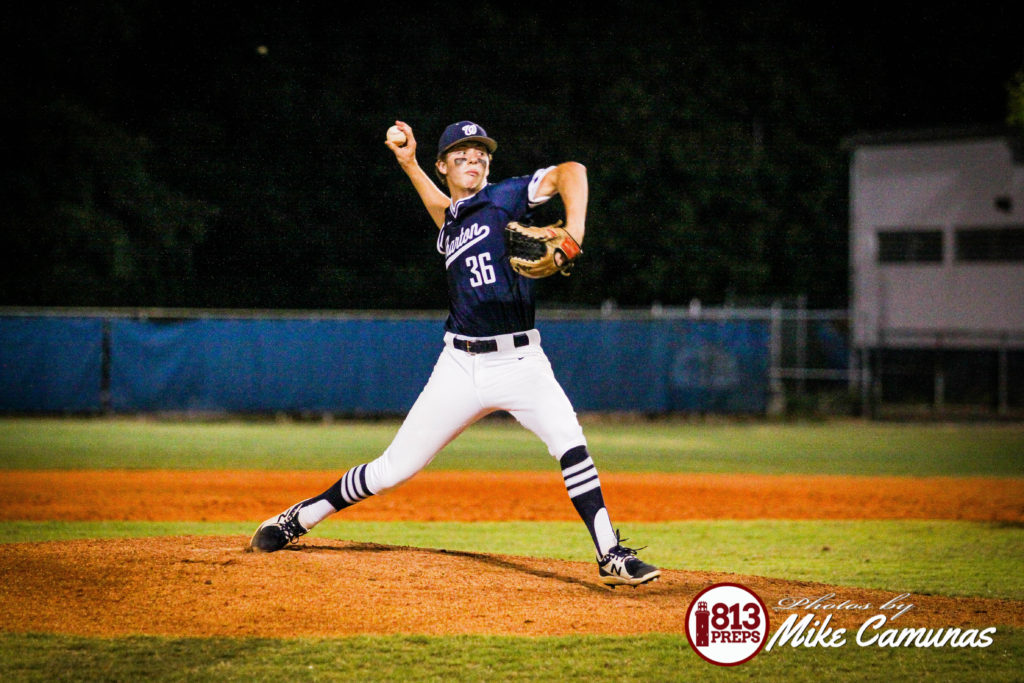 And lastly, postgame interview with @Whartonbaseball’s Scott Hoffman who told us how good @echrest18 always has been and pointed out that he does, IN FACT, have ice water in his veins. #truestory @813Preps pic.twitter.com/pzigRBCGiR