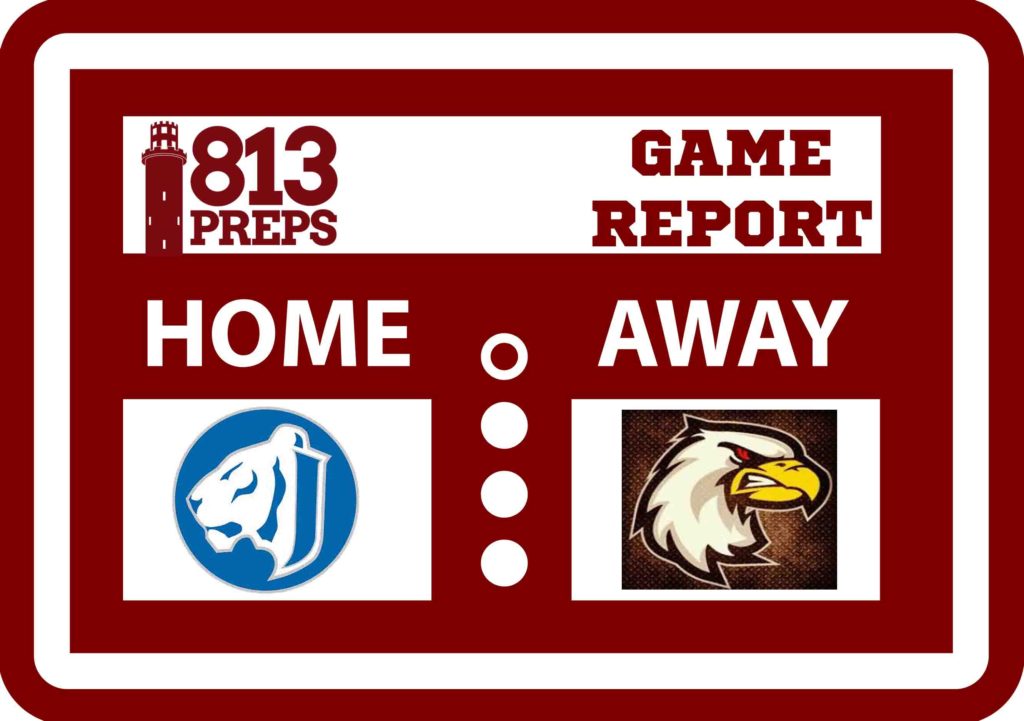 TAMPA – A trio of pitchers combined on a two-hitter as Jesuit used a big first inning and several sparkling defensive plays to take care of business in a 7-1 victory over Brandon in its 5A-Region 2 quarterfinal contest on Thursday night at Hyer Family Field.

The lead would be short-lived.

Jesuit (26-2) responded in the bottom of the frame with Bradke Lohry (2-for-2, RBI, run scored) drawing a leadoff walk followed by a B.J. Graham double. Next up was Cole Russo (2-for-3, two RBI) drilling a hard ground ball that took a huge hop over the head of Eagle second baseman Carson Juntilla and scored a pair.

After a Jake Kulikowski single, it was Nick Rodriguez (4-for-4, three RBI) lacing and opposite field double, plating Kulikowski and courtesy runner Carter French.

”We had no outs, so I was just trying to do my job and get the runners over,” said Rodriguez. “I was looking to pull the ball, but I got an inside pitch, so I had to figure something out and I just went the opposite way.”

The four-run outburst was more than enough for Jesuit’s deep stable of arms. After giving up two hits and two walks in the first inning, Tiger starter Dominic Castellano found his rhythm. The senior lefty would not allow another hit while striking out six in four innings of work, earning his eighth win of the year.

“The first inning on my part wasn’t very good. It was sloppy and I missed a lot of pitches and they (Brandon) took advantage of those mistakes,” said Castellano. “It was really important to hold them to one run. We got some runs, and I went out in the second and reset and I just did my job.”

Jesuit tacked on additional runs on an RBI single by Rodriguez, and an RBI double by A.J. Nessler. Rodriguez would also come home on a wild pitch.

Junior Jamie Arnold and senior Kris Sosnowski combined for three no-hit innings in relief of Castellano with Jack Martinez assisting Arnold with a spectacular catch in the bottom of the sixth.

This web gem by 2nd baseman Jack Martinez closes out the top of the 6th.

The victory sets up a fifth meeting this season with district foe Jefferson in the regional final on May 11th at Jesuit. The Dragons advanced to the meeting with a 4-2 victory over Auburndale on Thursday.