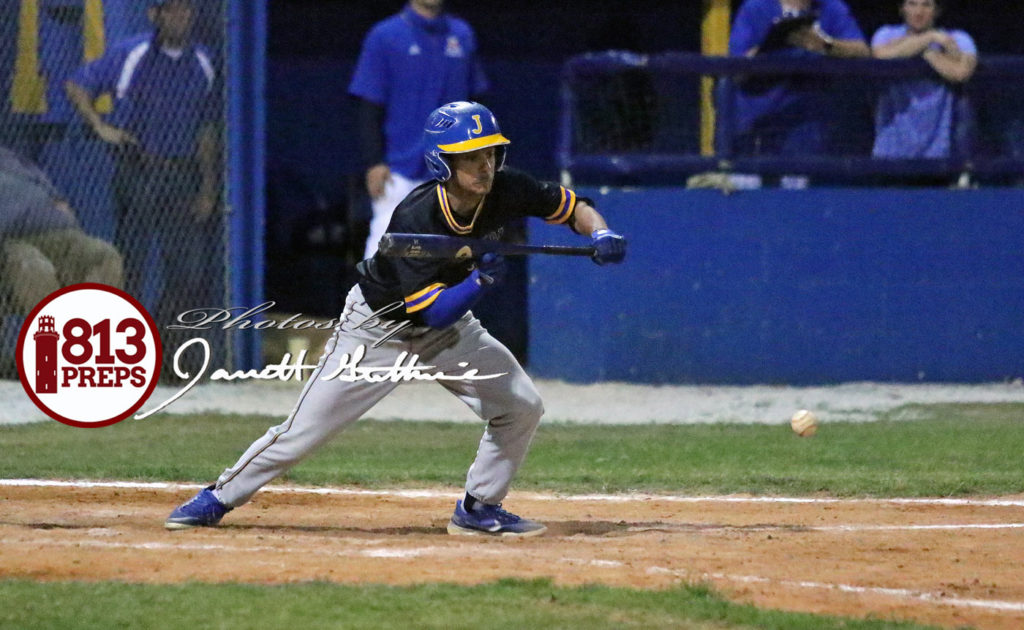 Dragons junior Sebastian Lopez dropped down a pinch-hit sac bunt to give Jefferson the edge against Auburndale in the sixth inning.

AUBURNDALE – Jefferson senior Jaiden Duarte’s night at the plate was unremarkable, but after Auburndale took a lead in the home-fifth Duarte and his Dragons teammates were met heading into the dugout by first-year head coach Spencer Nunez with a simple statement: “this is your game. You win it. Or you lose it, right here.”

Duarte doubled down, challenging his teammates even more prior to stepping to the plate to start the sixth telling them he hadn’t ever wanted anything more than to see his senior season continue.

He swung at all four pitches he saw in the AB, swinging over a fastball for strike three, but made a dropped ball hurt hustling down to first base and reaching on the wild pitch. Within the next four pitches he’d be standing on third, swiping a pair and setting up fellow senior Matthew Johnson to tie the game with an infield single. The Dragons made the inning count, plating three and taking a 4-2 victory back home to West Tampa in Thursday’s Class 5A-Region 2 quarterfinal. 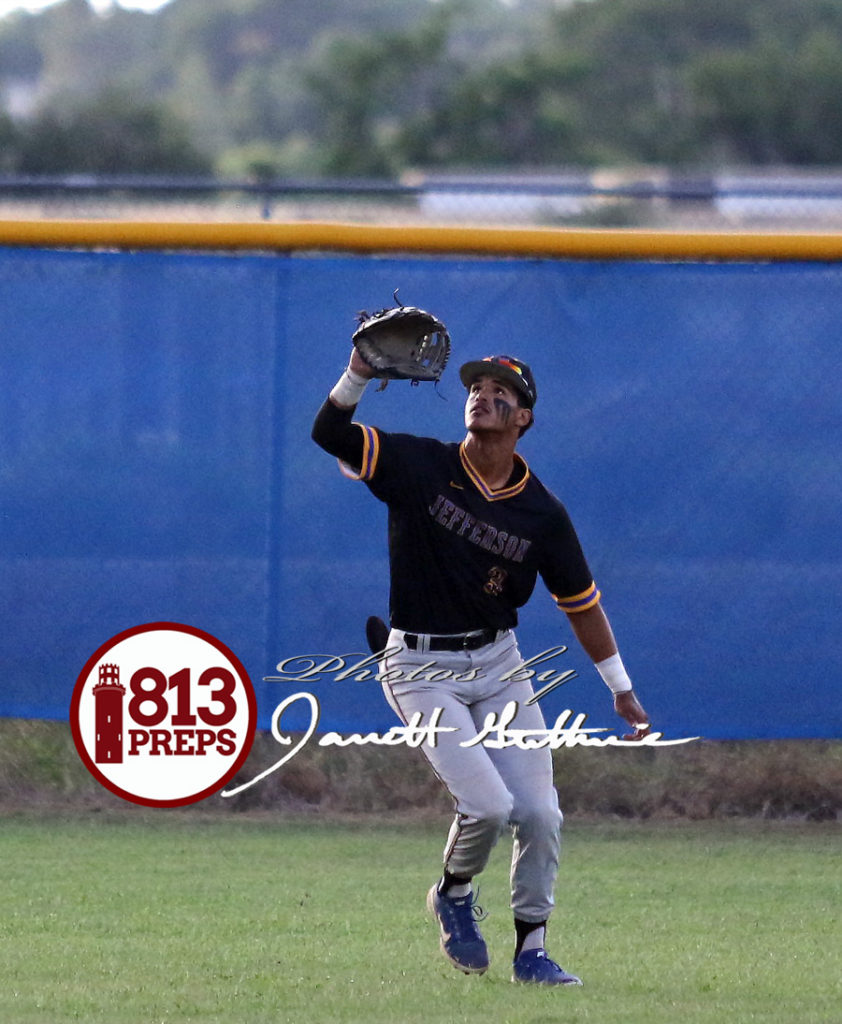 “Anything you have to do, whatever way possible,” Duarte said. “I just had to find a way to get on, things happen you get lucky, then get a couple of good pitches to steal on … trust your guys.

“I was able to get on, yeah, but those guys did the rest of the job to bring me in and keep it going.”

Duarte’s hustle proved the spark for Jefferson (17-10) as the Dragons took advantage of an error to move Johnson up to second, a Dylan DeGusipe single put him at third and pinch-hitter Sebastian Lopez executed a deadened sac bunt to plate Johnson for what would prove the decider.

“I was nervous – really nervous,” Lopez said. “But when my number was called, I had to go in and take care of business.”

The Dragons would add one more when DeGusipe forced a rundown on a missed bunt attempt and swerved around a pickle play and slid head-first into the plate. 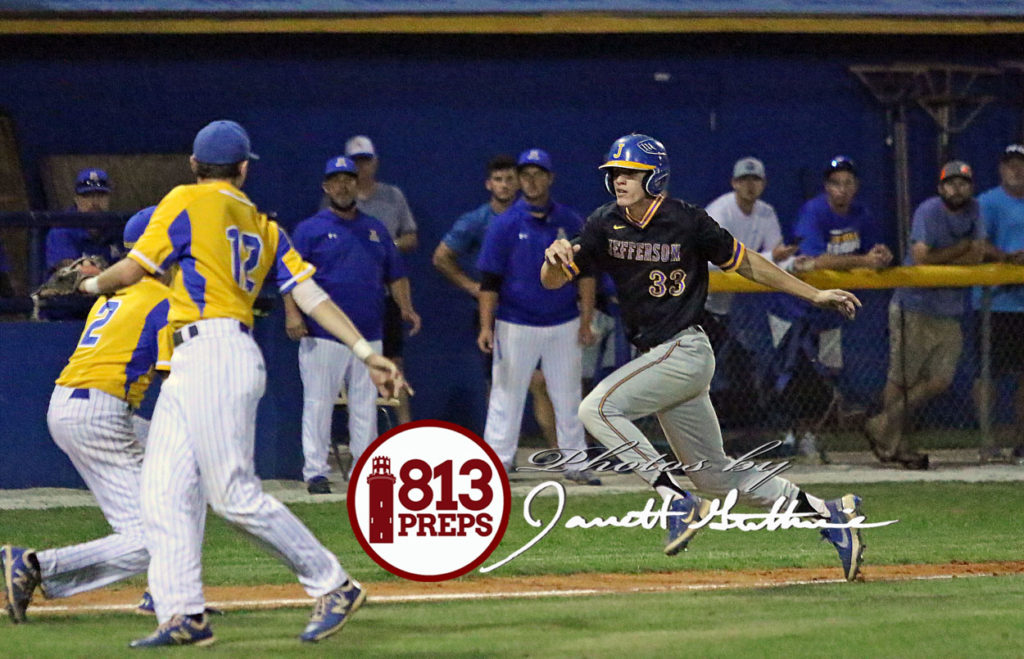 Dylan DeGusipe was way off on a missed bunt attempt, but worked the rundown and charged home to score an insurance run for the Dragons in the sixth.

From there, Johnson would shut the door earning the win in relief of Javier James, finishing the final 2 1/3 innings, allowing one hit, walking two and striking out a pair.

“No moment is too big,” Johnson said. “I went out there for the seventh inning with a two-run lead, pitched to contact and got groundballs.” 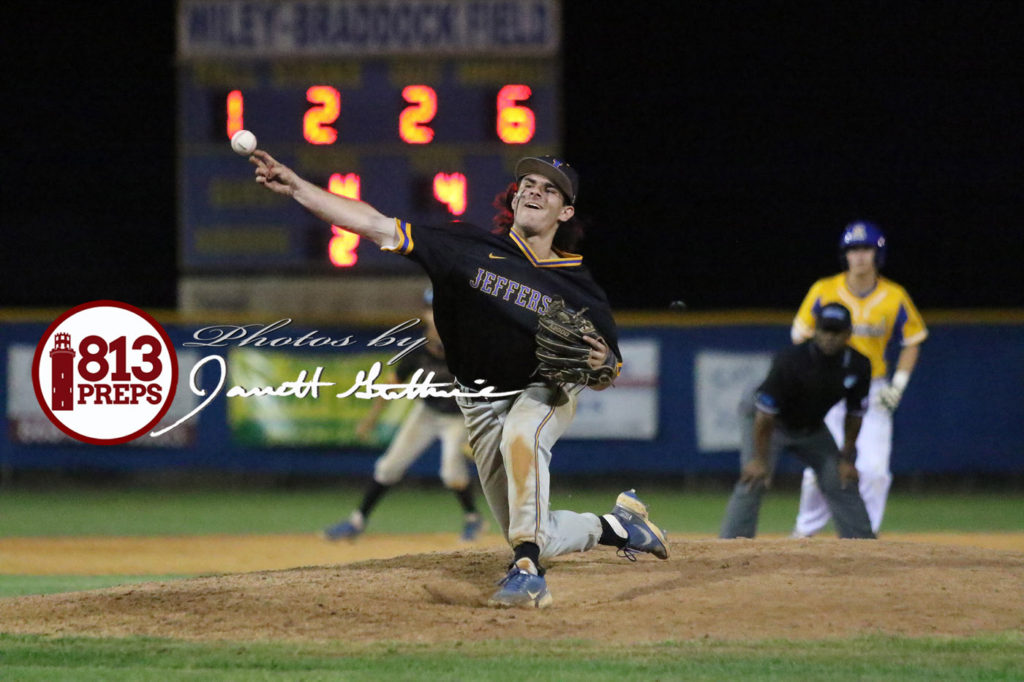 James started the game off reaching on a two-base error, and two more errors on Auburndale (15-11-1) allowed the game’s first run.

Making the start on the mound, James cruised through the first four innings, walking a pair and allowing a double, while striking out five. The double looked like it might prove troublesome, but Dylan DeGusipe made sure it wasn’t with a great running catch in right-field amidst heavy winds.

“When it first came off the bat, I had a little bit of trouble seeing it,” DeGusipe admitted. “I had to run way farther than I thought on that one as the wind was carrying it, but Jaiden (Duarte) was directing me from center and I knew I had it.”

The fifth proved difficult for the righty as a close call allowed a two-out runner to reach and things spiraled a bit with James issuing two walks to end his night on the mound. Johnson moved from first to the mound and Zaylen Perry drew a bases-loaded walk to tie things and another Dragons error spotted the Bloodhounds a temporary lead. 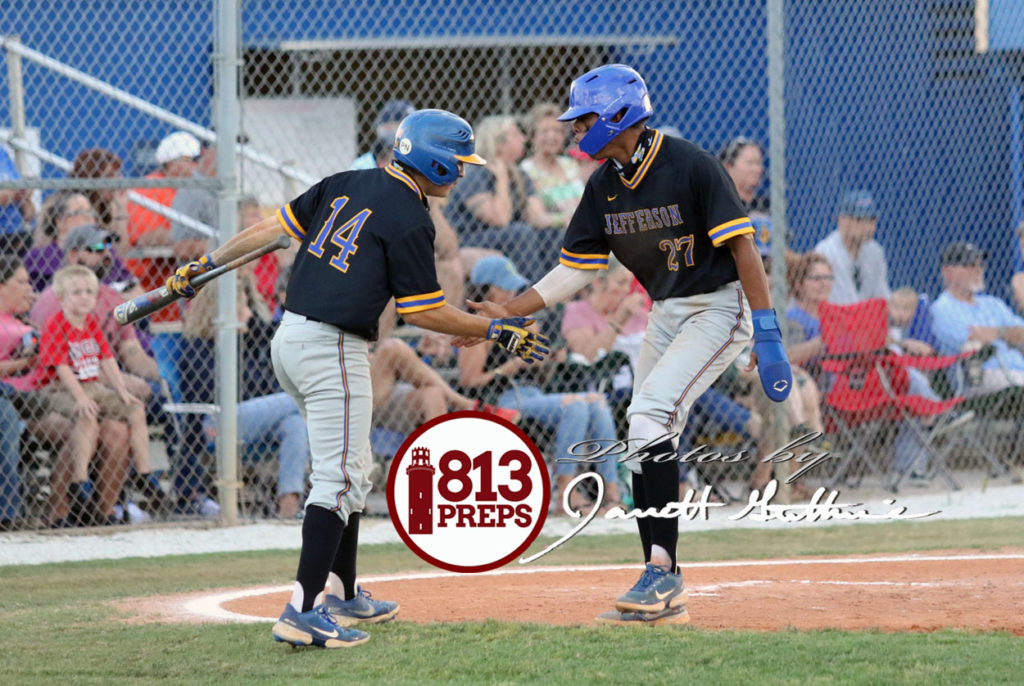 Javier James is congratulated by Yaidel Perez after scoring the game’s first run. 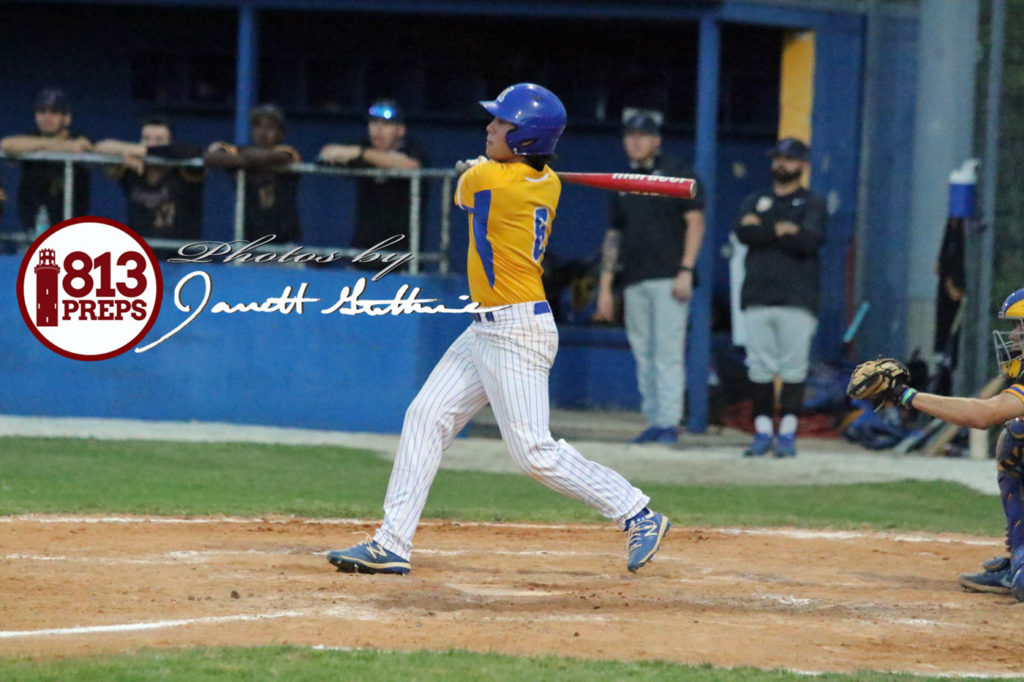 Auburndale’s Cole Quintanilla hits a double in the fourth. 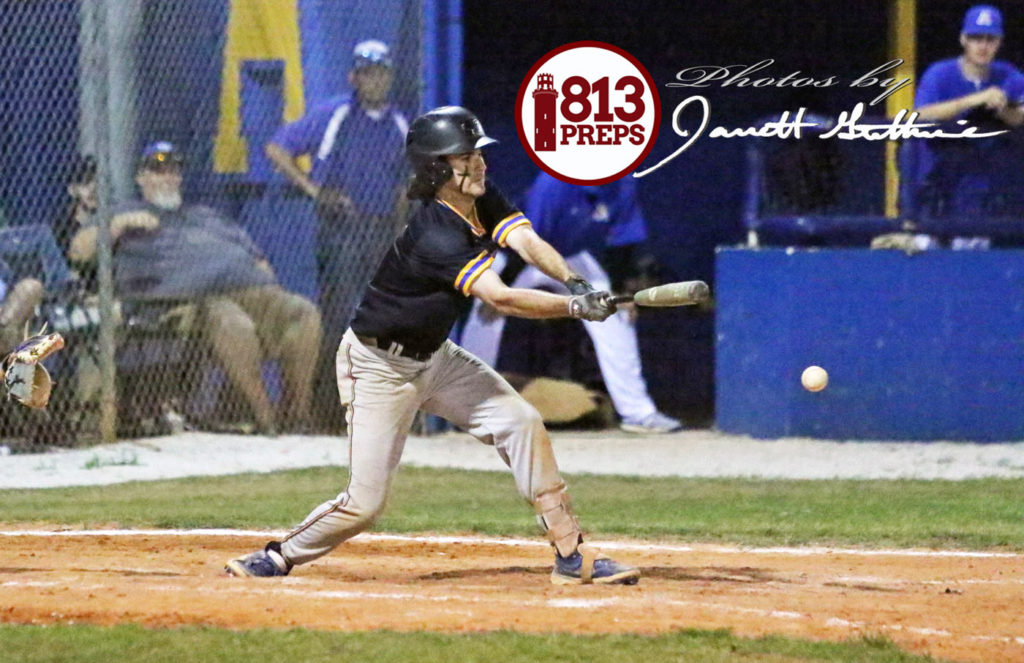 Matthew Johnson slaps an infield single to tie the game in the sixth. 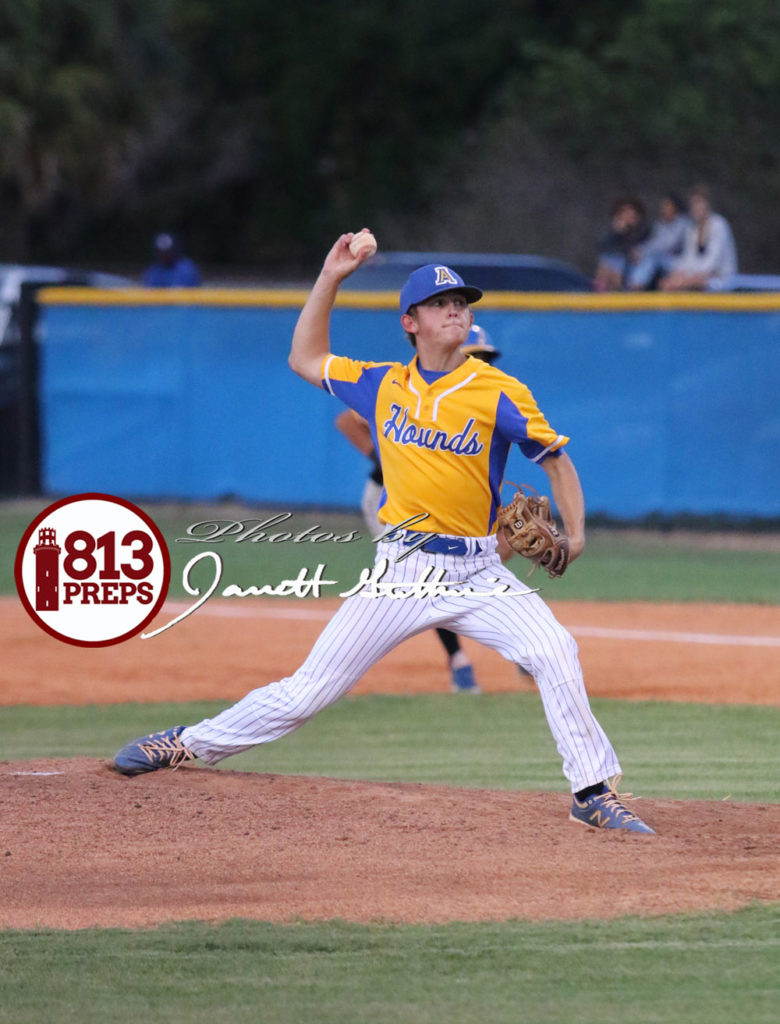 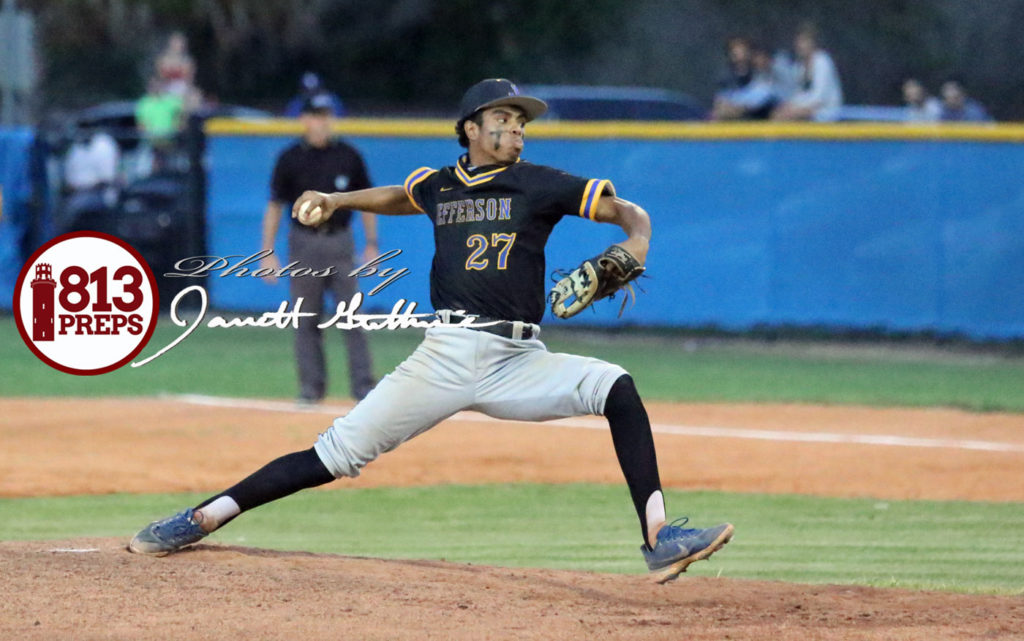 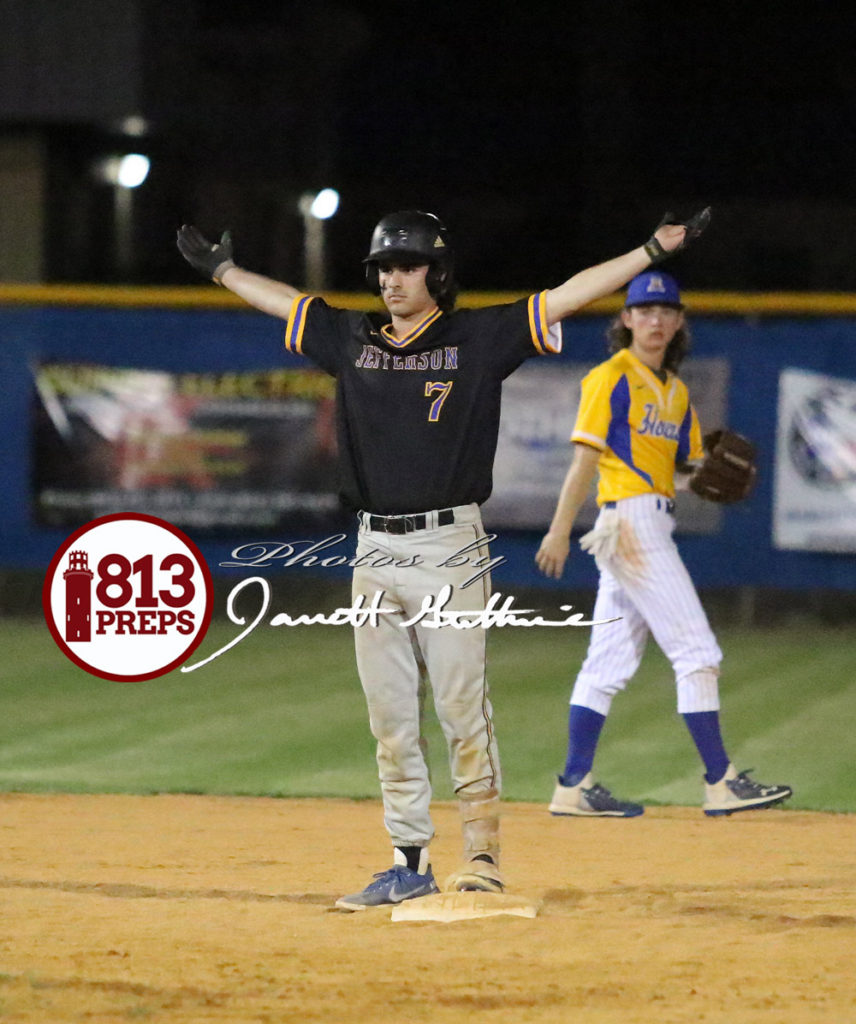 Johnson celebrates tying the game with his single, and took second on an error and scored the game-winning run.

However, according to Lopez it was just the kick in the gut the Dragons would need as Duarte made his mid-inning plea.

“(Jaiden) pulled us aside, I want this more than anything,” Lopez said. “That got to my heart. I had to do it for him and our other seniors.”

The Bloodhounds got everything they could ask for from sophomore starting pitcher Daniel Hartley, who battled for 5 1/3 innings before pitch-count rules forced him from the game. The right-hander allowed two unearned runs, on two hits while striking out six.

The Dragons win lines up a region semifinal meeting with Jesuit, as Jefferson looks to attempt to change its fortunes against the Tigers in the pairs’ fifth meeting of the season, next Tuesday at Hyer Family Park.