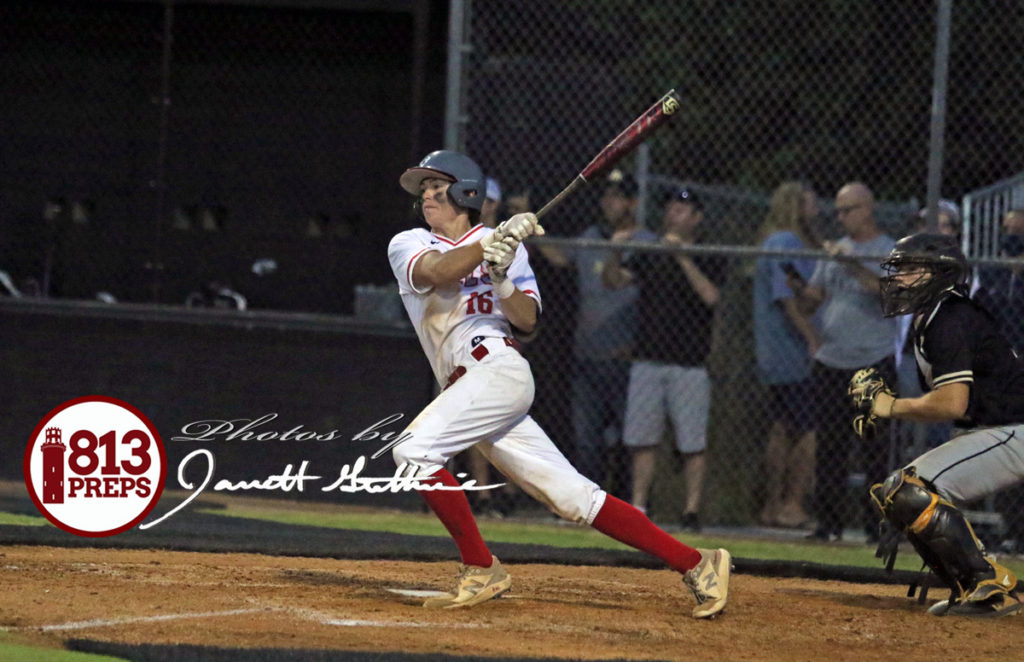 Bloomingdale senior Gabe Garrett sends a skipping single into left starting a rallying fourth inning as the Bulls defeat Mitchell 2-1 in the 6A Region 2 semifinal.

VALRICO – From the start on Wednesday, Bloomingdale looked flat in its Class 6A-Region 3 semifinal game with Mitchell. The fire was not quite sparked for the Bulls.

A walk issued to Mustangs’ leadoff hitter Aidan Miller, small ball moving him over, getting third on an error and the game’s first run cashed in on a single off the bat of Keaton Howard.

On offense the Bulls were stymied by Mitchell starting pitcher James Hill the first time through the lineup, save for a first-inning single from Gabe Garrett.

But in the home fourth down a run it would be Garrett’s second at-bat, or maybe more accurately the moments before his second at-bat, which would light the blaze for the Bulls as Bloomingdale turned back Mitchell, 2-1 to advance to Saturday’s region final game.

“I talked to Coach Wilken after the first two innings and he challenged me and a couple of our other guys to get our guys fired up in the dugout before we hit that second time through (the order),” Garrett said. “We really came together there, scored some runs and that changed this for us.” 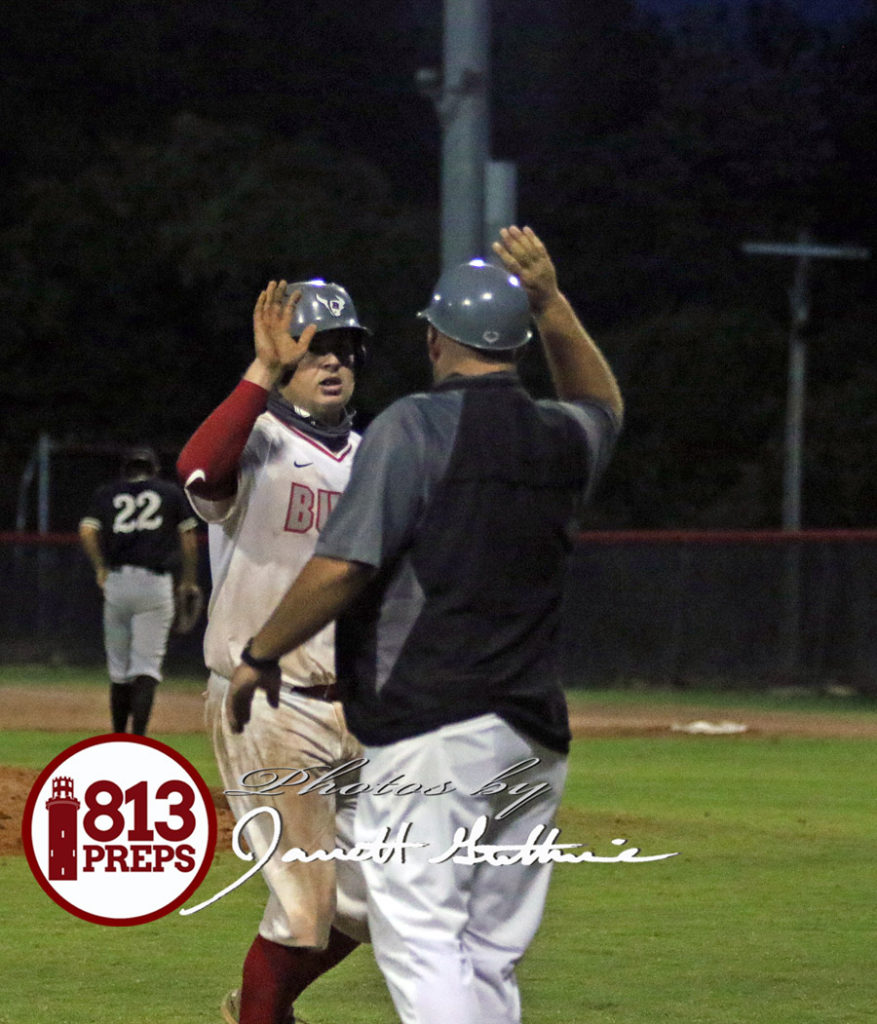 After Hill struck out the side in the third, two of those on full counts, the two-strike approach was crucial in the fourth inning for Bloomingdale (21-6). Garrett worked the count full and slapped a ground ball into left. Colby Shelton followed with a walk, Marlon Bowen moved both runners to scoring position with a sac bunt, before a wild pitch tied the game and Wyatt Strickland’s sac fly gave the Bulls all the runs needed to hold off the Mustangs.

“Gabe Garrett’s at-bat was absolutely huge, but what Gabe did in the dugout before that at-bat was even bigger,” Bulls coach Kris Wilken said. “That’s the stuff nobody will see, he came off the field and as our senior leader, got everyone up and said, ‘enough is enough.’

“He led the charge there. That’s what Gabe Garrett does.”

On the mound the first inning was also a bit of a slow pickup for Bulls junior hurler Jack Owens (8-2, 0.92 ERA), issuing the walk, committing the throwing error that allowed Miller to third and then the hit that scored Mitchell’s run. But a big play on a missed squeeze bunt attempt stranded a runner between home and third and the Bulls were able to get the second out, and Owens recorded his first K to end the frame. 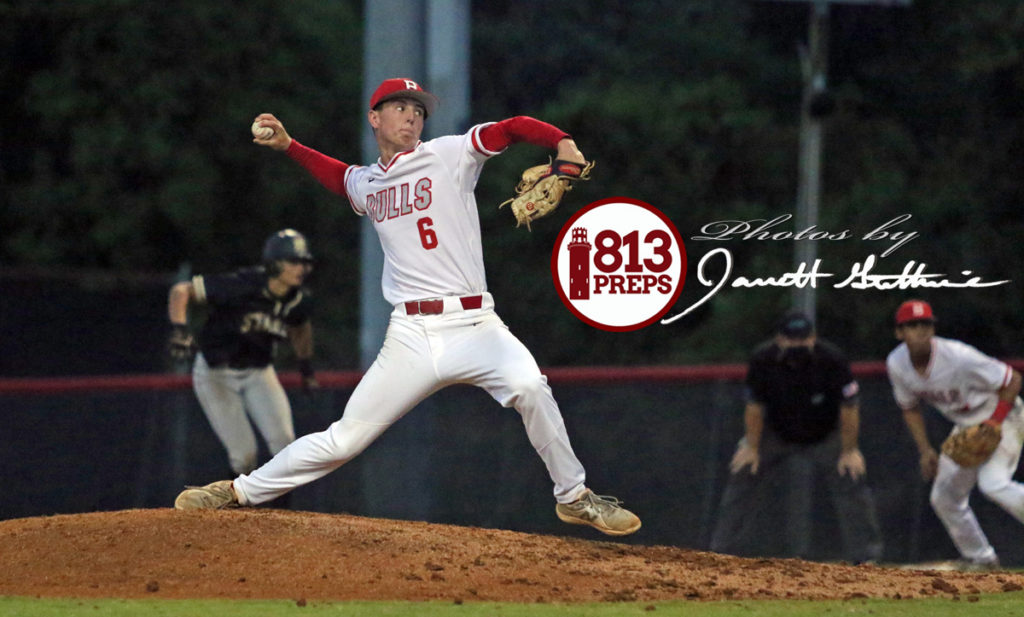 From there the Stetson commit bullied his way through six innings, scattering just two more hits and one more walk after the first.

“This is the first time (pitching in the region tournament) for me, so there were a little nerves,” Owens said. “The error over there and they got that run, but after that third out, that’s when it started to click.”

After that first inning, no Mitchell runner reached second base the rest of the way.

While the top of the first went on, senior David Eckaus was sent to the bullpen to get ready. And he got ready, tossing pitches, having nearly every coach come over and tell him, to stay loose, but not get too tired. For six innings, the FIU signee did what was asked of him putting in the work, never less than three pitches away from being ready. 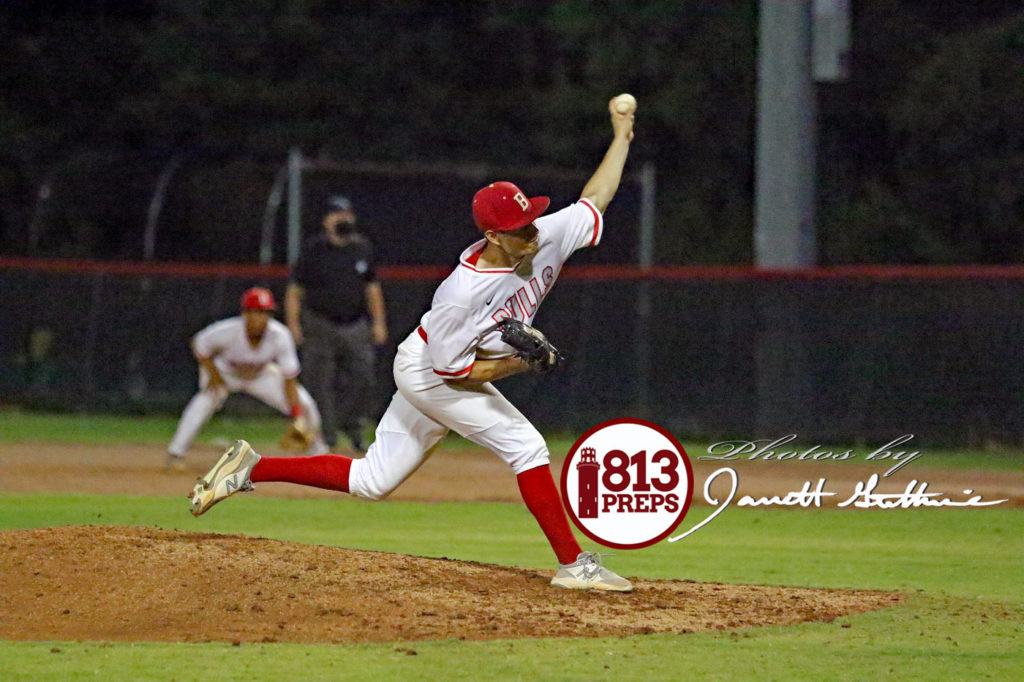 Senior David Eckaus closed the door with a three-out save for Bloomingdale.

Eckaus chance came in relief in the seventh and he picked up right where Owens left off, working a 1-2-3 inning to earn the save, catching a foul pop for the second out and ending the game with a full-count strikeout.

“You can’t be distracted, you have to stay in every moment,” Eckaus said of his extensive time in the pen. “This is baseball, anything can happen, and when I came in, I did my job.

“It was definitely different, but you have a job and you watch the game just like you are out there starting. Stay in it the whole way.” 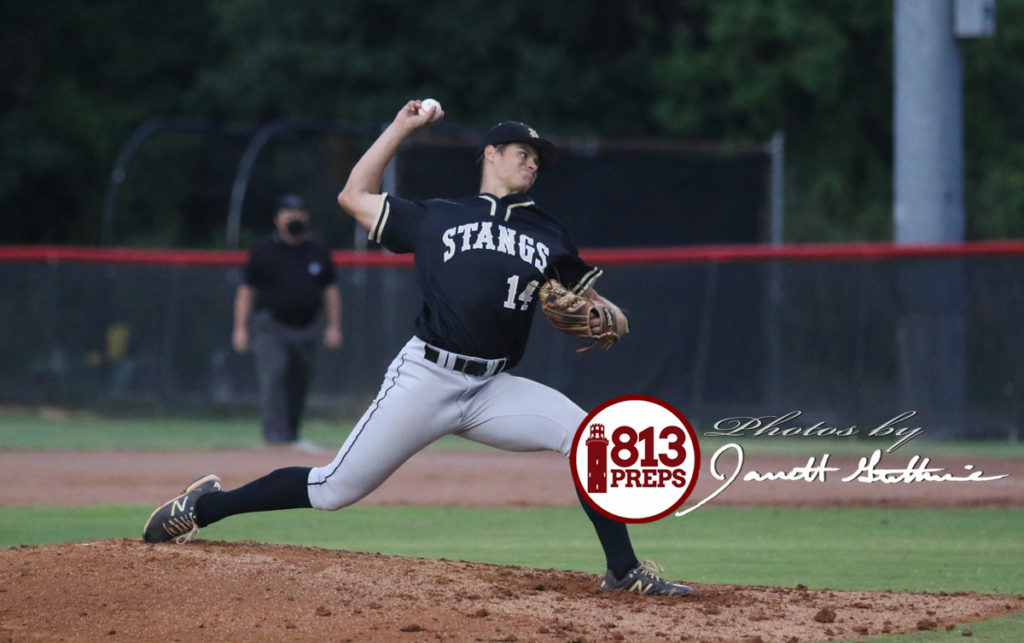 Mitchell (22-7) proved to be incredibly similar to Bloomingdale in an evenly contested game, and Hill was impressive on the mound. The senior, who dealt with some arm issues around spring break worked a curveball well, setting up a high fastball that he consistently pumped by Bulls hitters. Hill worked 5 1/3 innings, allowing two earned, on three hits and a walk and striking out eight.

“First of all, James was in rehab with some arm issues until after spring break,” Mustangs coach Howard Chittum. “He showed command, worked them well all night, and had them off-balance all night.

“Give credit to Bloomingdale, they executed, played excellent defense and their pitchers worked well. We knew these two teams kind of mirrored each other, and we knew they weren’t going to beat themselves.”

Bloomingdale reaches the state region final for the first time since the Bulls state runner-up finish in 2014. The Bulls will travel south on Saturday, taking on Naples Gulf Coast, which defeated Venice 4-0 on Wednesday. 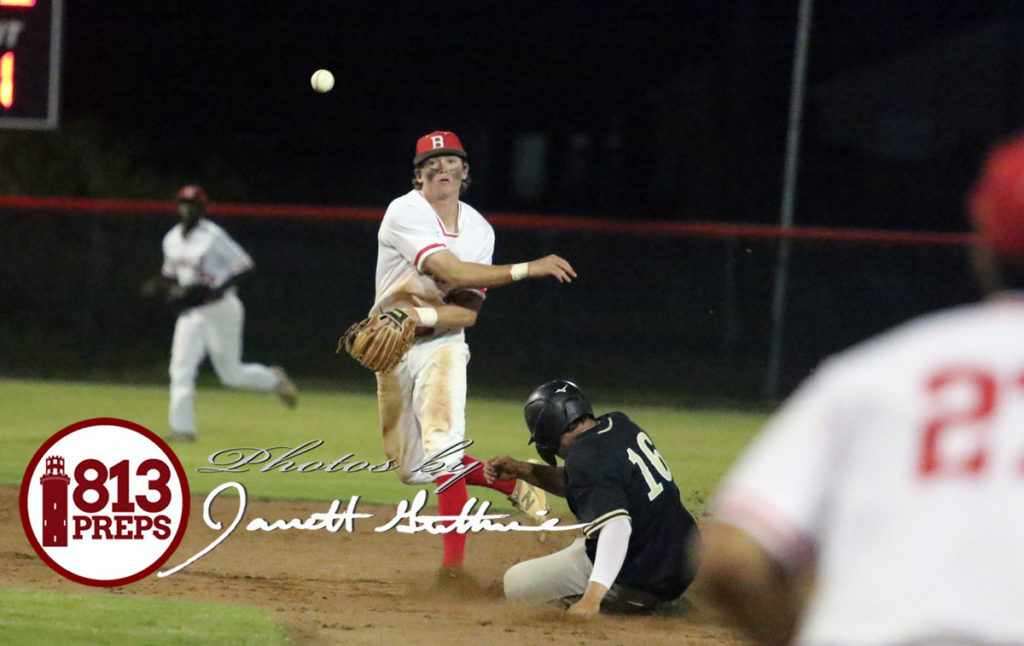 Bulls 2B Gabe Garrett makes an out then throws on to first. 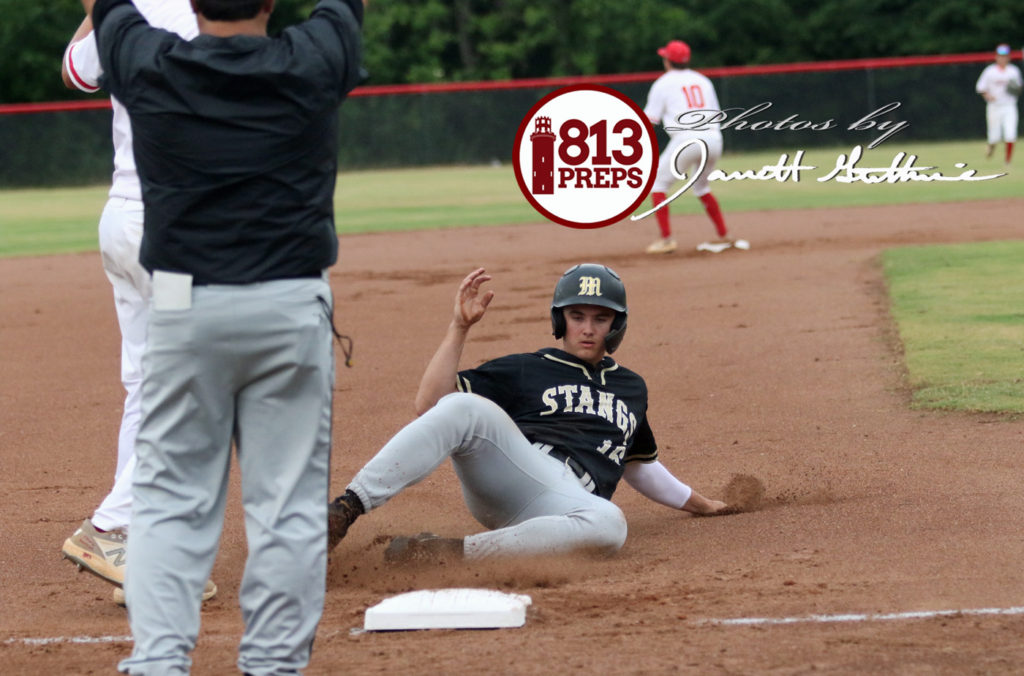 Aidan Miller slides into third in the first inning. Miller would soon score the Mustangs lone run of the game. 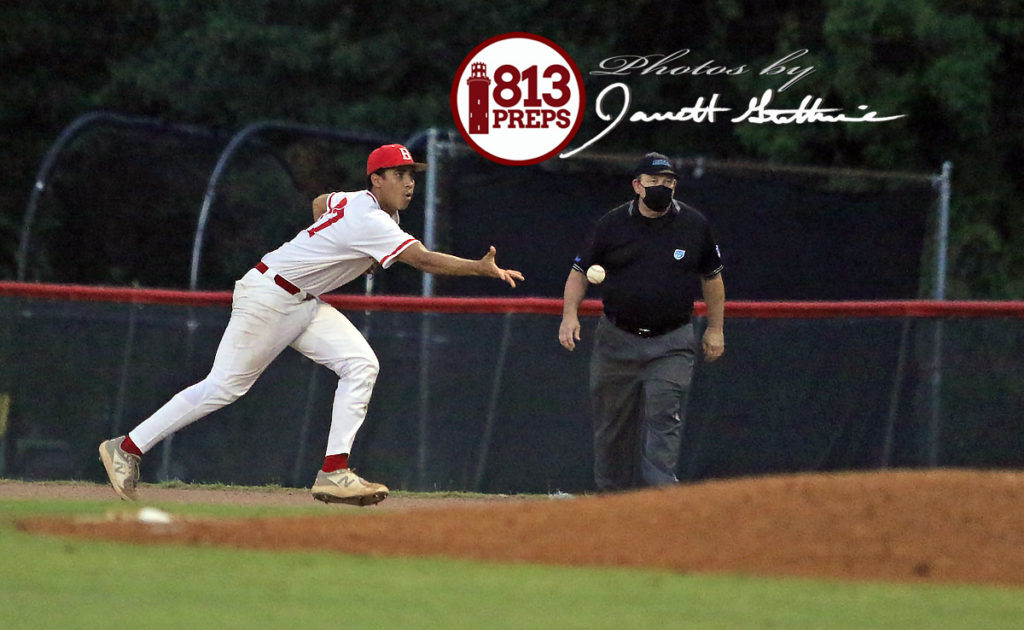 Bloomingdale 1B Carlos DeJesus flips a toss to the pitcher covering first. 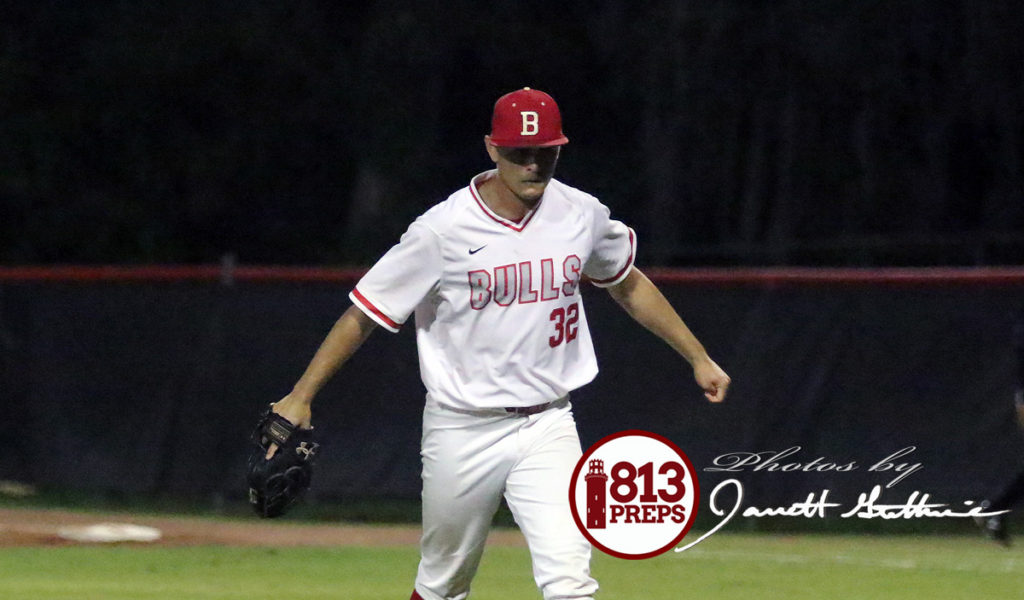 A modest and stoic celebration for David Eckaus after ending the game with a strikeout. 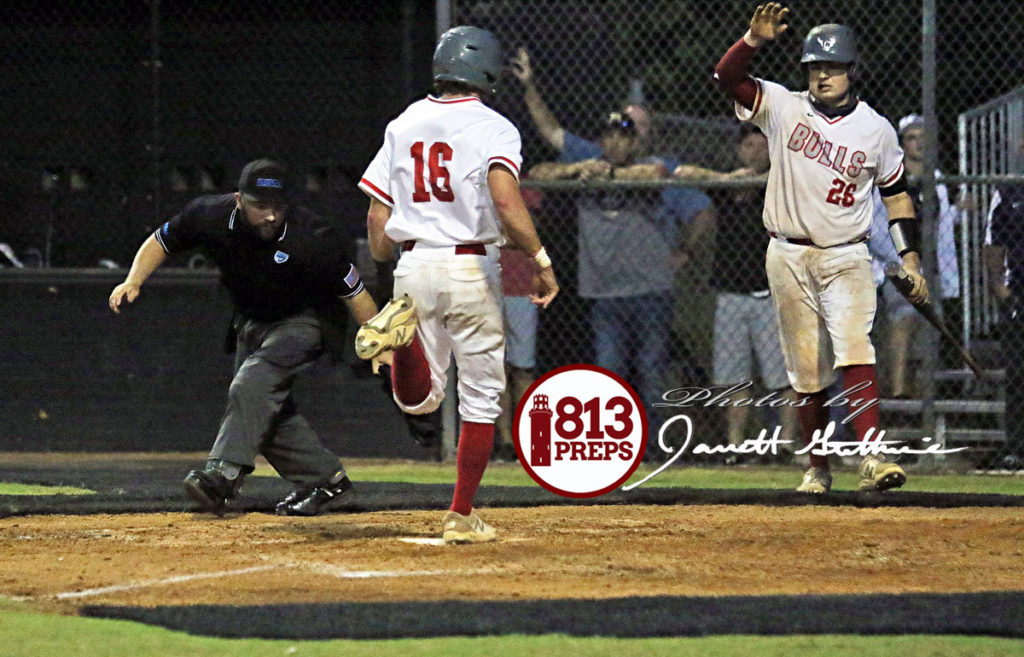 Gabe Garrett scores the tying run in the fourth. 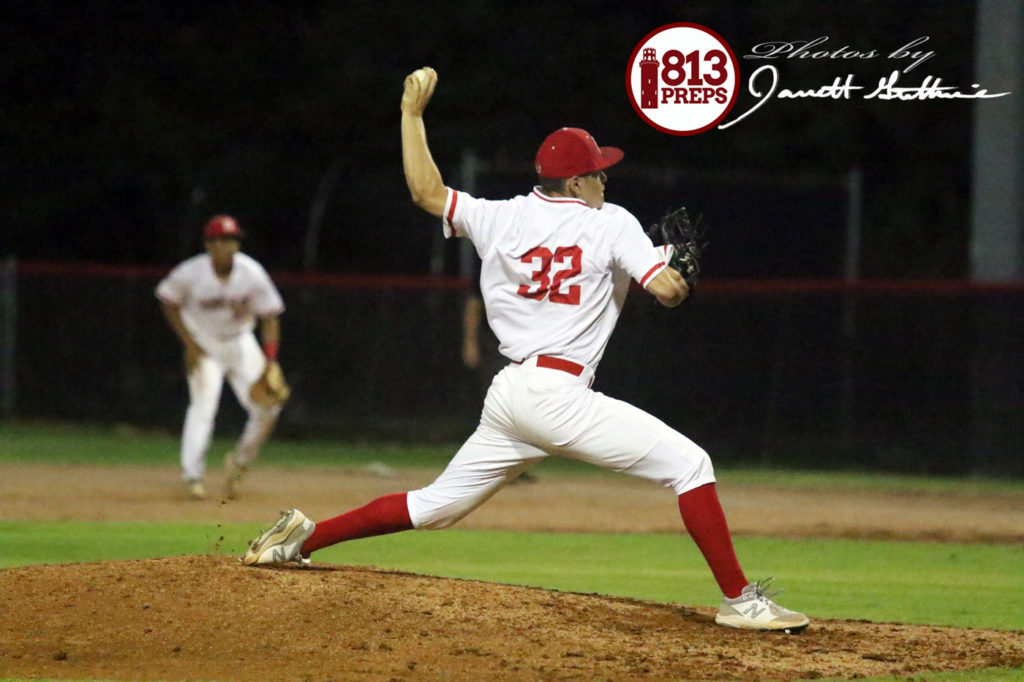 Bulls senior David Eckaus delivers a pitch in the seventh. 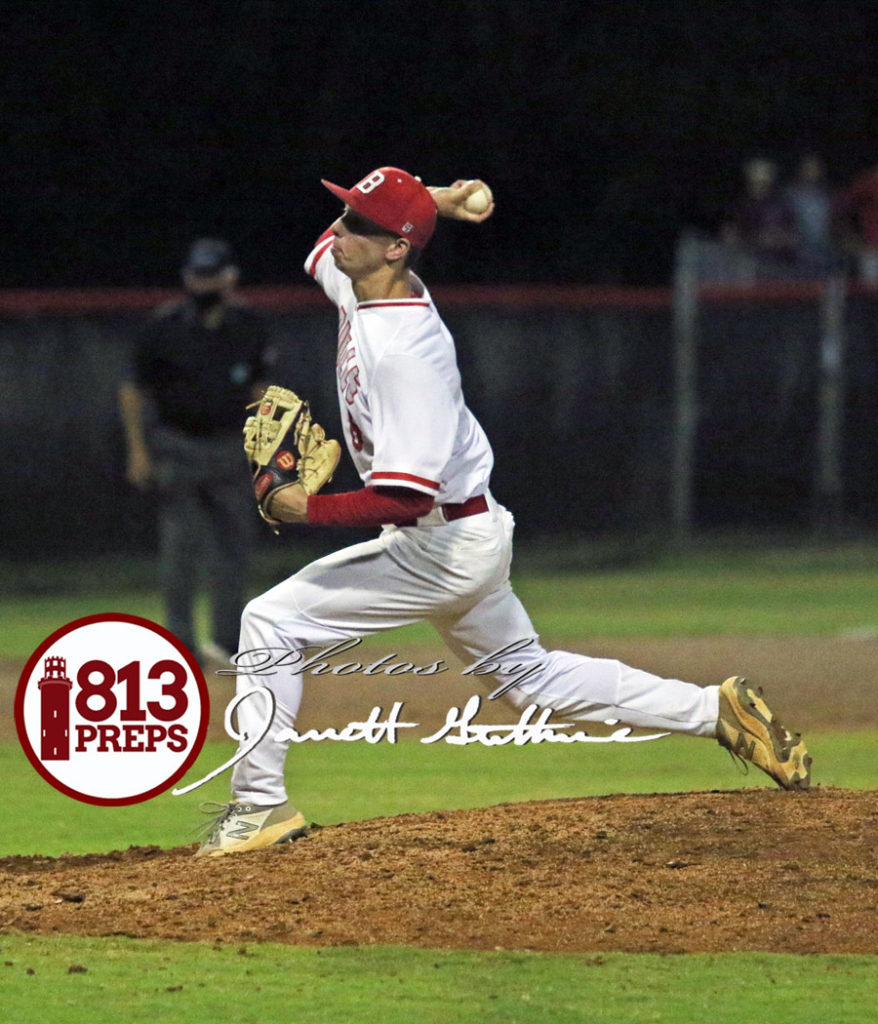 Bulls junior Jack Owens improved to 8-2 on the season with a six inning outing. 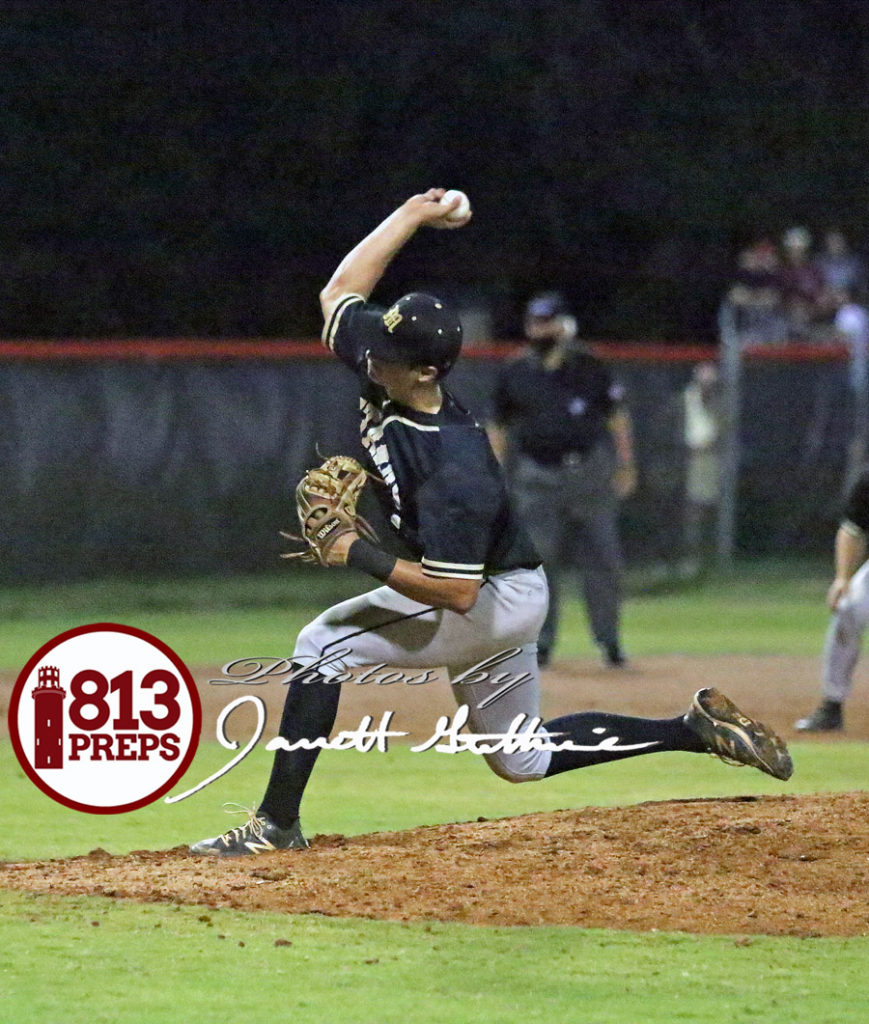