Dragons grind but fall in 5A semi to Mosley 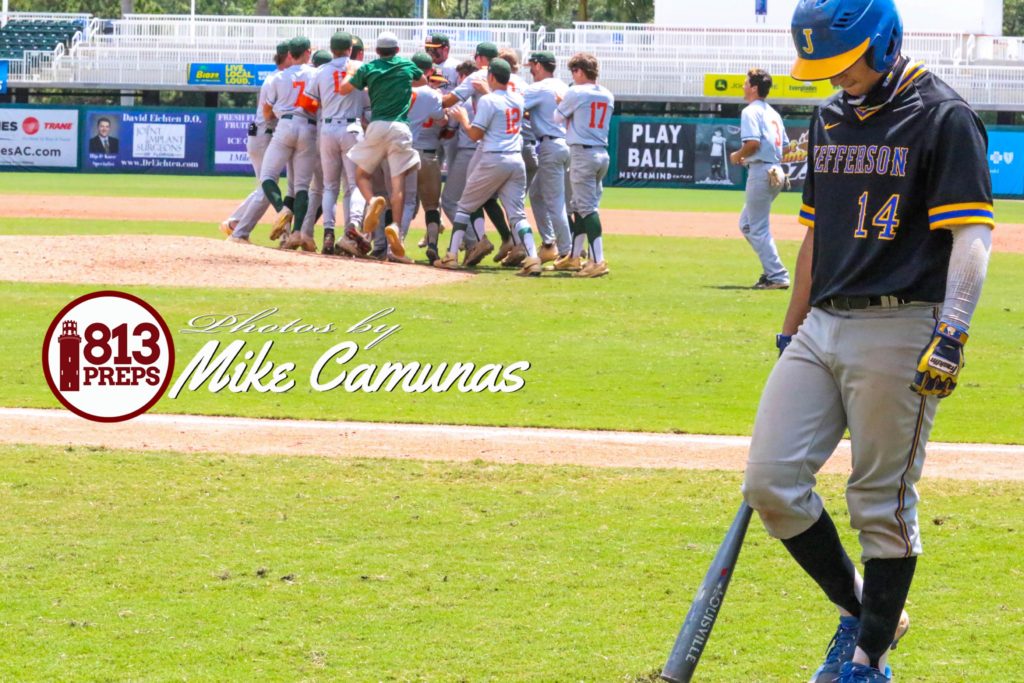 Yaidel Perez walks back to the dugout as Mosley players celebrate a 5-1 victory over Jefferson in the FHSAA Class 5A state semifinal game.

FORT MYERS – For the better part of two months, Jefferson head coach Spencer Nunez said he was extremely proud of the “grind” his Dragons baseball players put up. That effort continued through the blazing heat of Tuesday’s mid-morning FHSAA Class 5A state semifinal – seven innings of fight.

Unfortunately, though the fight was there, it was matched by steady consistency of Lynn Haven Mosley starting pitcher Jaden Rudd, who peppered the strike zone in a complete-game effort – and a huge grand slam swing from Dolphins slugger David Hudson pushed things out of reach for the Dragons, falling to Mosley 5-1.

“I thought we battled pretty hard for all seven,” Nunez said. “One big hit led to it, a questionable pitch before it, and I thought my guys responded to [the home run] pretty well. We never stopped fighting.” 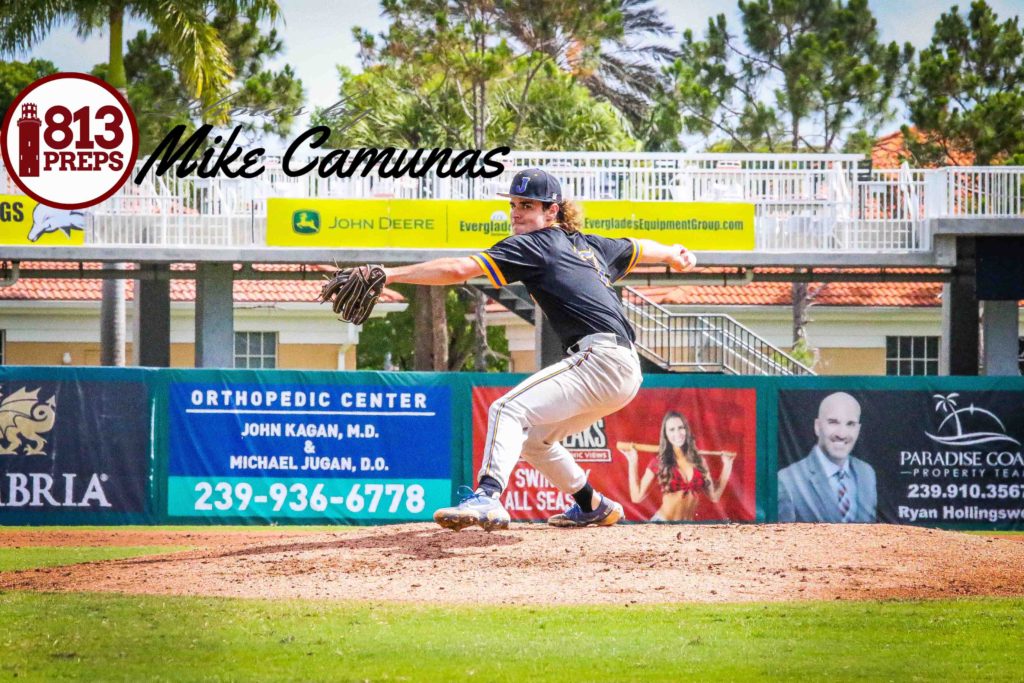 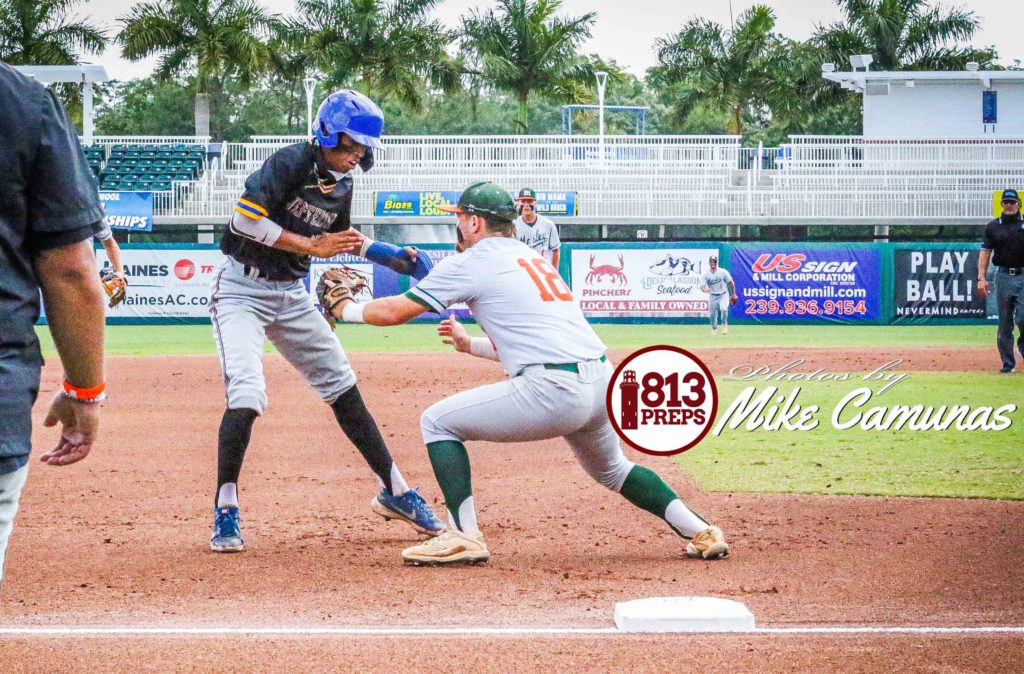 Mosley 3B Trent Nelson tags out Javier James in the first inning. 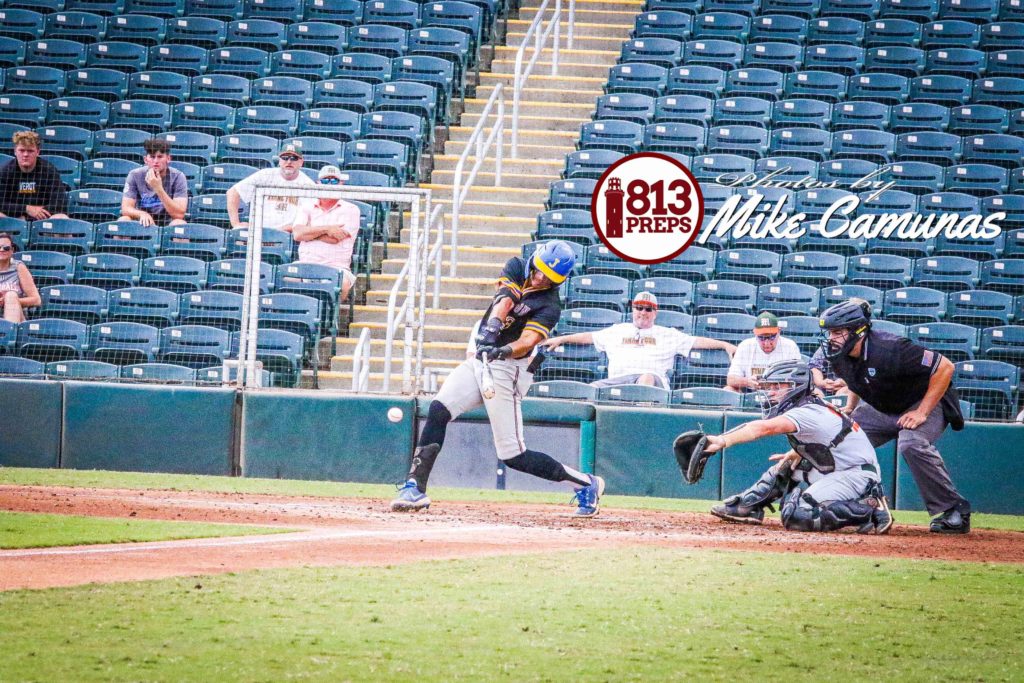 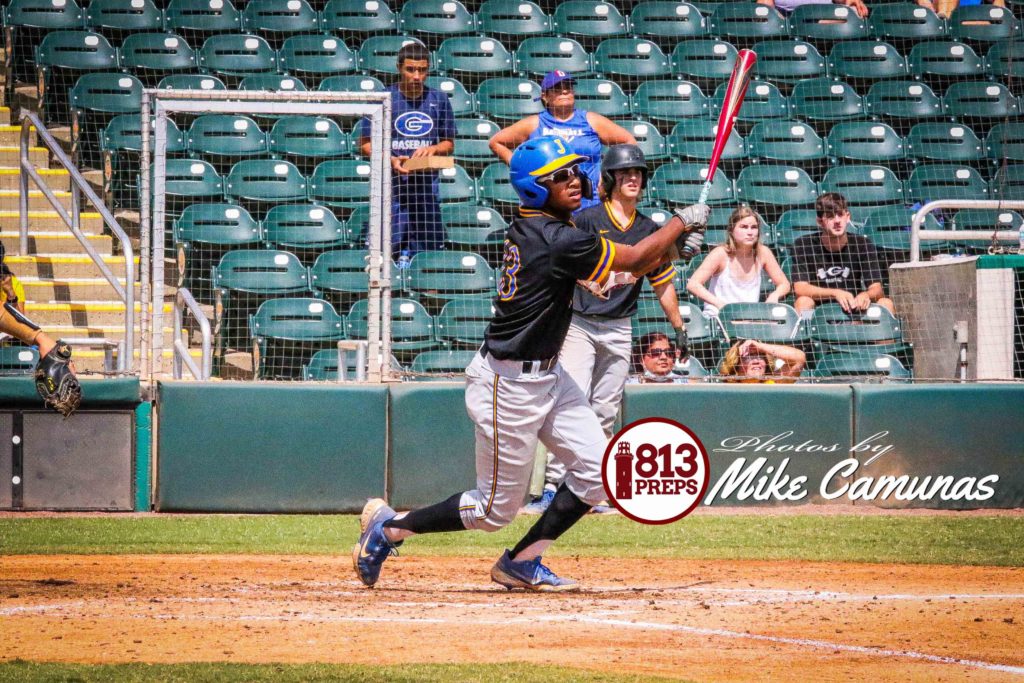 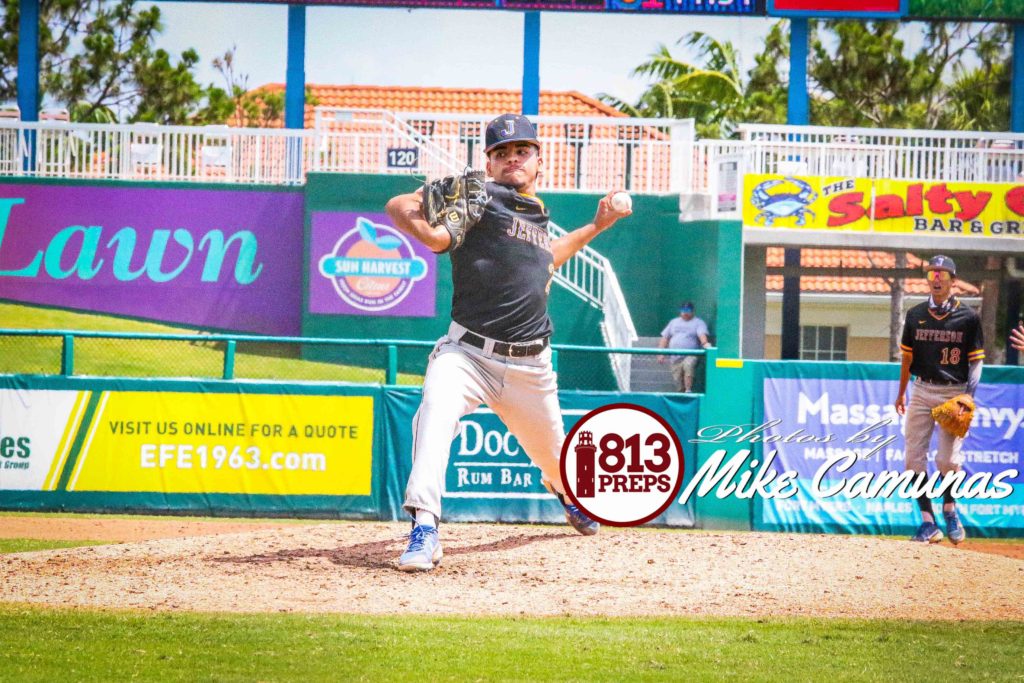 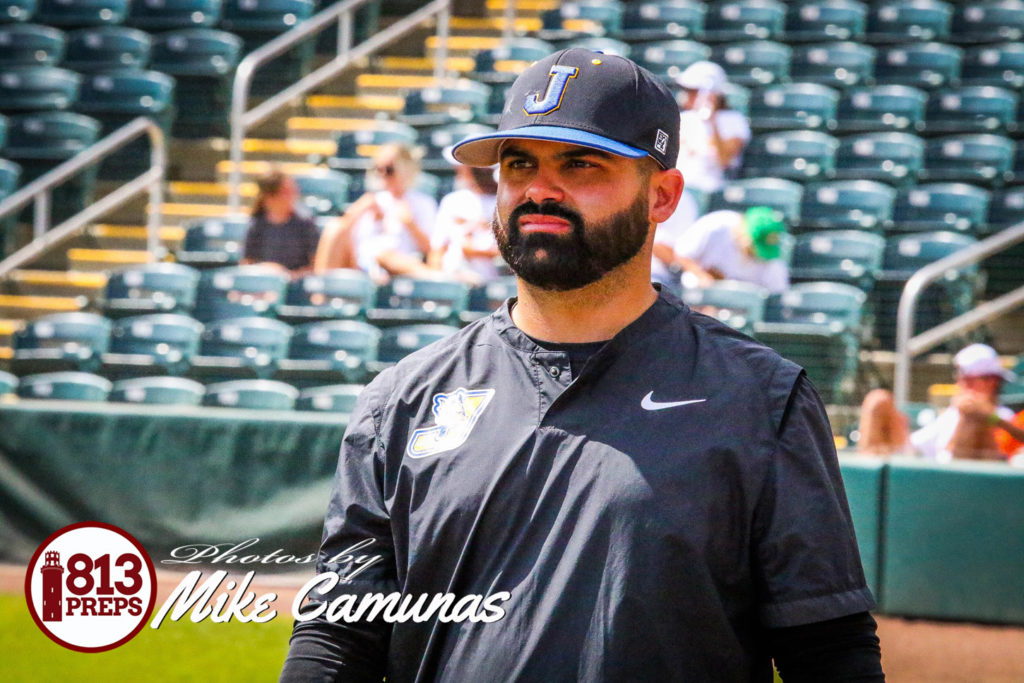 Feverish fight became the Dragons identity as the team found itself with a losing record after a baker’s dozen games, only to surge at the perfect time and win 13-of-16 to lead up to Tuesday’s semifinal game.

“They do the hard work, and at 6-7 the funny part was we said, ‘there was nowhere to go but up,’” the coach said. “… From that point forward, it was just grind everything out, play all seven innings, never quit and that’s what they did [today].”

“At that 6-7 mark, we knew that was not where we wanted to be, we knew what our potential was,” senior Jaiden Duarte said. “That gave us a little drive … we just connected, all the dominoes fell and we just took off. We all had a role and we played those to a T and that is what got us here.”

Playing those roles, and an aggressive style led Jefferson (19-11) to the dance, and things didn’t change on Tuesday. Senior Javier James led off the game with a skipping chopper down the third base line for a double, but a few pitches later on a first-move play he jumped early and Rudd erased the runner at third base.

“I kind of got a little hesitant, while I was looking to go on first movement,” James said. “I thought he was going home, but he turned and picked me off.”

The next inning, Alejandro Montada’s skied pop fly in shallow left found earth for a friendly-scorekeeper’s double and Duarte moved him to third in the next at-bat, but again Rudd clamped down picking up two of his five strikeouts in the game to keep the runner 90 feet from glory.

The top of the third saw Mosley (26-5) strike first as Rudd walked and eventually scored on the Dolphins first hit, a single by Tyler Wave.

Dragons senior starting pitcher Matthew Johnson issued a walk to start the fourth, but added two strikeouts in the frame, and an interference call on one of those strike-three’s erased the runner.

The fifth inning however, proved insurmountable. The Dolphins ripped off three-straight singles from Trent Nelson, Rudd, and Coleman Rowan loading them up for Hudson. The senior squared up a 2-2 pitch, ripping it off the bat and the ball carried as it skirted the fence in left for the grand slam, his seventh homer of the year.

“When I first hit it, I don’t even know that it’s gone,” Hudson said. “I looked up and saw [pinch runner] Nathan Kelly come back [to the bag], I thought, ‘there is no way that didn’t go out.’

“I thought he caught it, but then it was immediate chills … I didn’t mean for it to happen, but I’m glad it did.” 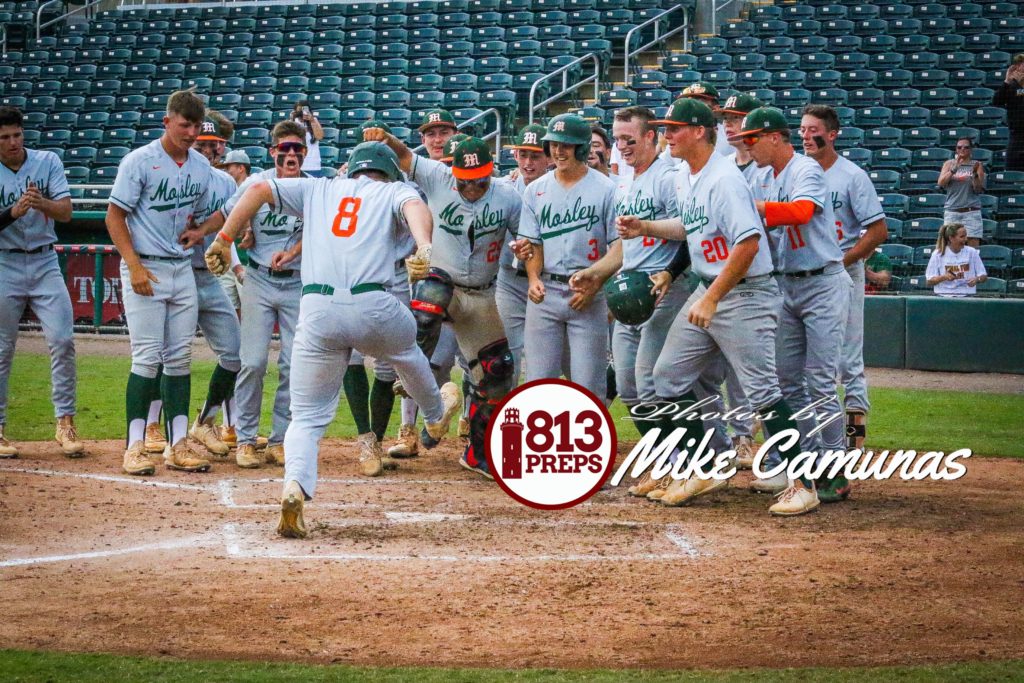 Mosley senior David Hudson stomps on the plate after his fifth-inning grand slam put the Dolphins up big.

Jefferson scratched one back in the sixth with some good two-out hitting, James picked up his second hit of the game to left, and advanced to second on a walk, before motoring around from there on a liner single from Johnson.

“I was just focused on getting on base no matter what,” James said. “We were down by five, but so what? Get one run, and anything can happen in baseball.”

Johnson, who sparked the brief rally with the RBI hit, said he guessed fastball from Rudd and did what he could with it.

“I knew up by five runs with two outs he was going to throw me a fastball,” Johnson said. “So, I just sat on it and got a barrel to it.” 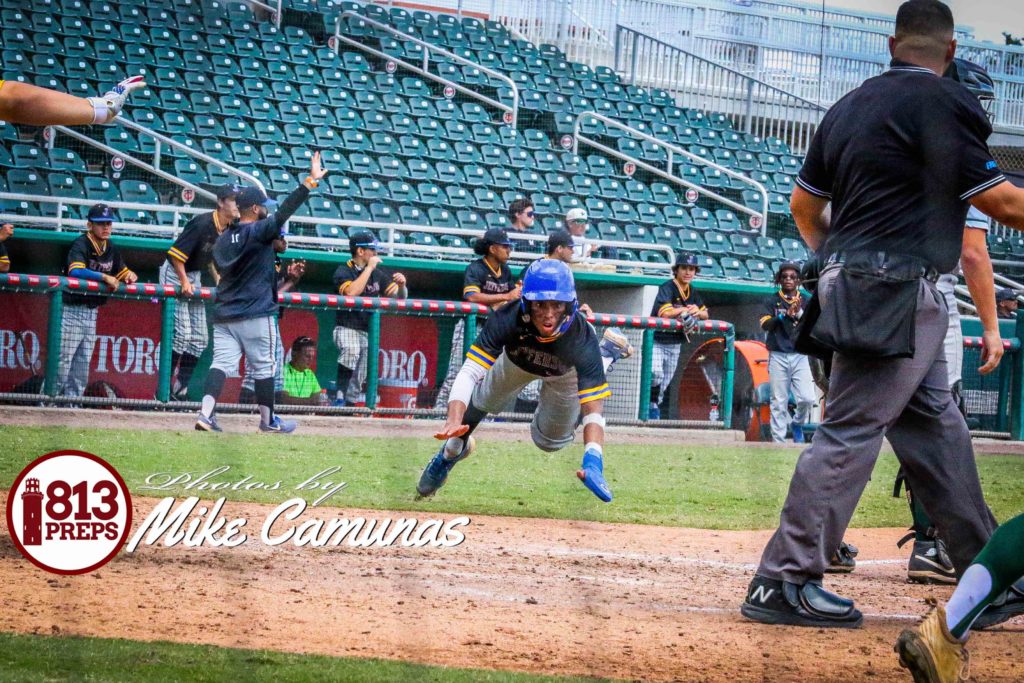 Jefferson’s Javier James dives into the plate, scoring the Dragons only run in the sixth.

Mosley head coach Jon Hudson said he knew his team, though ranked No. 5 in the FHSAA state rankings according to MaxPreps would have its hands full with the Dragons, which previously played giant-slayer by defeating No. 1 ranked Jesuit two weeks ago.

“We knew they were a really tough team, Jefferson,” Hudson said. “We knew we would have to go out and win, that they were not going to come out and give it to us.”

Dylan DeGusipe’s single in the seventh also came with two outs, but the Dragons couldn’t manage to cut any deeper into the deficit, as Rudd got a foul out to end the game. The Notre Dame-signed lefty allowed one run, on just five hits and a walk, striking out five to improve to 7-1, earning victories on the mound for his team in every game since the district final. 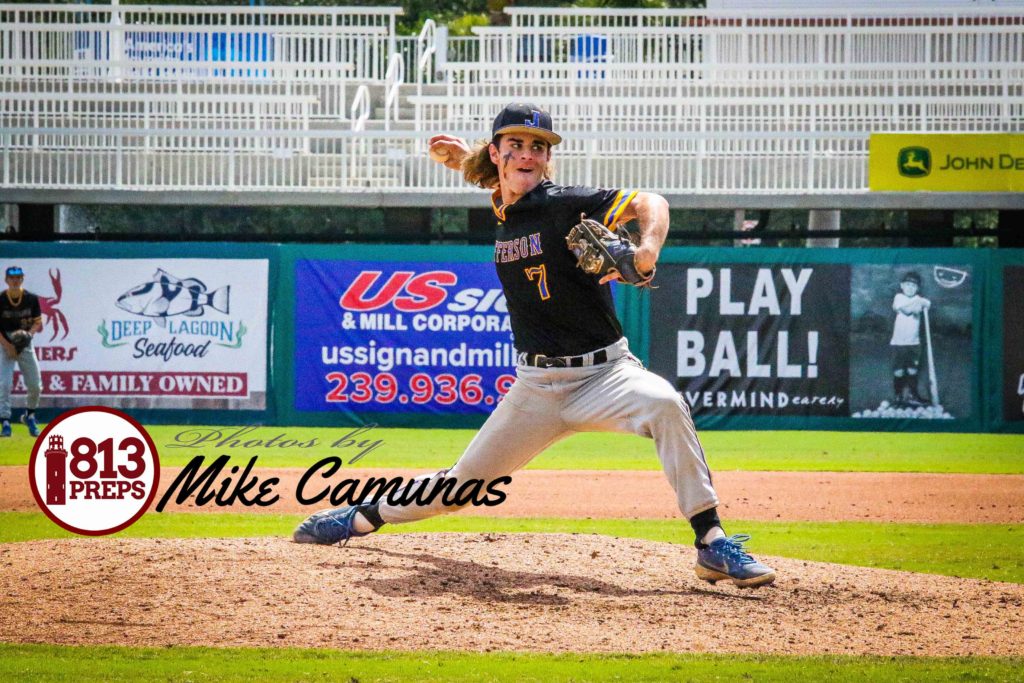 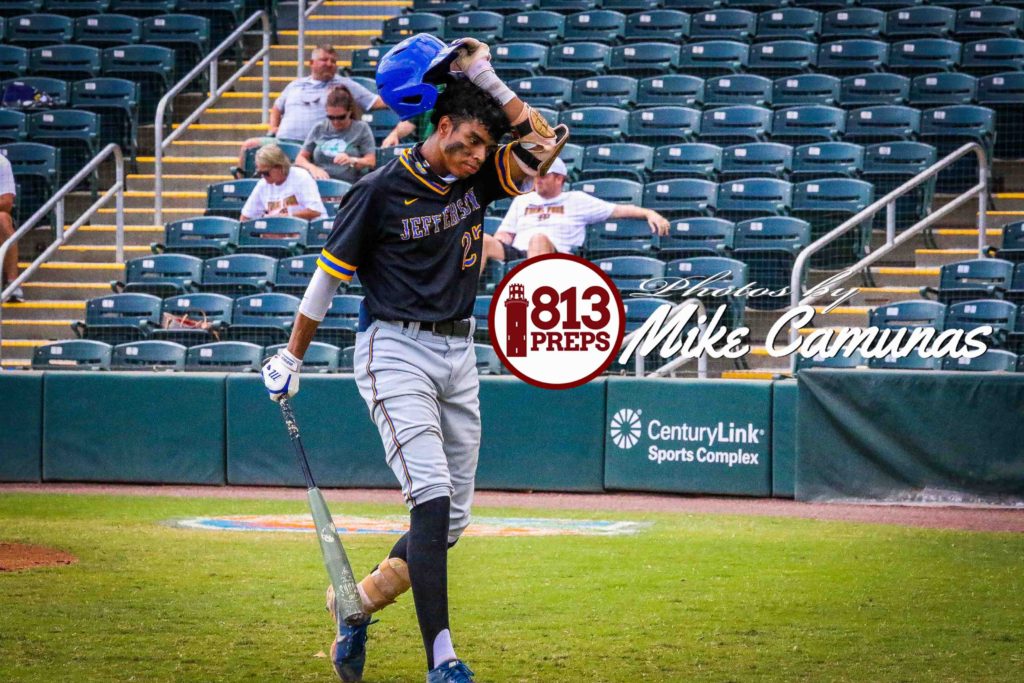 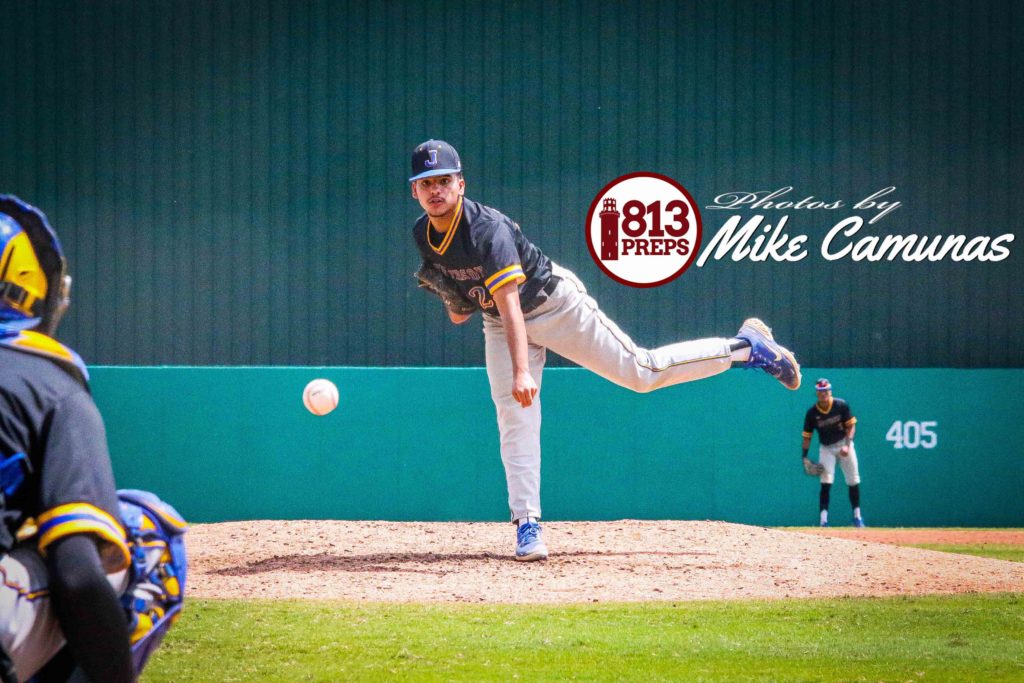 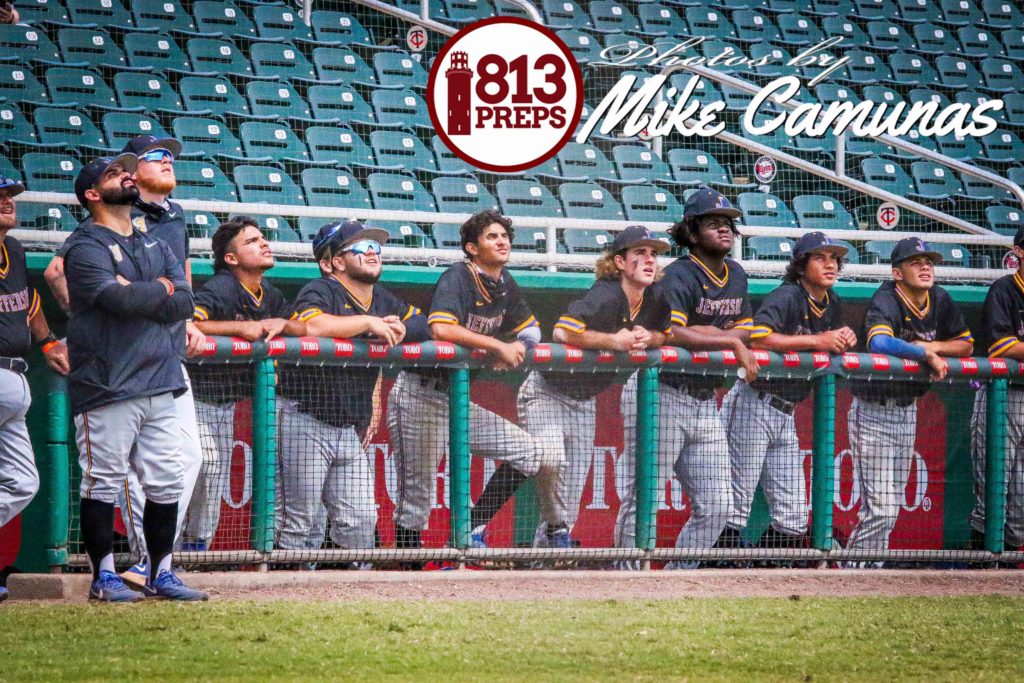 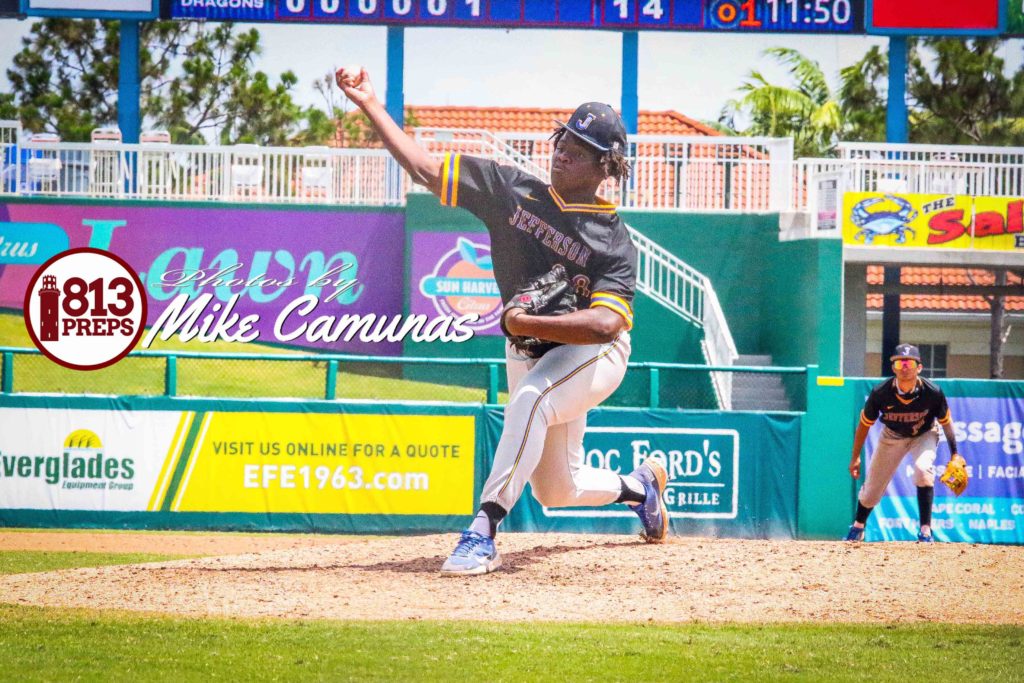 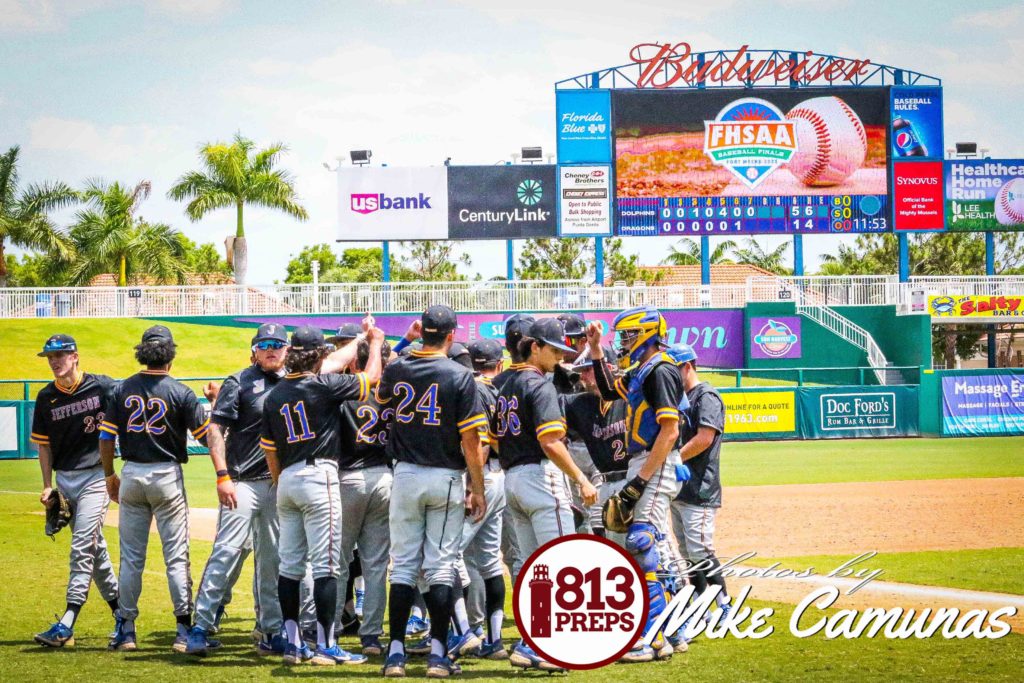 Jefferson players meet in front of the dugout prior to the seventh.

After the grand slam ended Johnson’s day on the mound (4+ip, five runs, five hits, four walks, five strikeouts), Julian Vargas came on in relief working two scoreless innings, allowing just one single, and senior Carson Moore finished off the seventh innings with a strikeout in a 1-2-3 inning. Nunez spoke again about his players unselfishness in filling whatever role they were tasked with.

“Carson Moore, that was his first inning in the postseason, and he was a guy who was 8-0 for us,” Nunez said. “And I can’t say enough about Julian, he’s been lockdown … he has this focus about him when he gets on the mound, and if he keeps that up he’s going to be pretty special next year.”

Mosley, which has reached the final four six times in the last eight seasons, but has walked away without a title during that stretch. The Dolphins lone state championship came in 2002, with three of its most-recent runs ending in defeat to Fort Lauderdale Archbishop McCarthy. Mosley will get a chance to settle that score in Wednesday’s final as McCarthy advanced in the afternoon game by defeating Naples Barron Collier, 4-1. 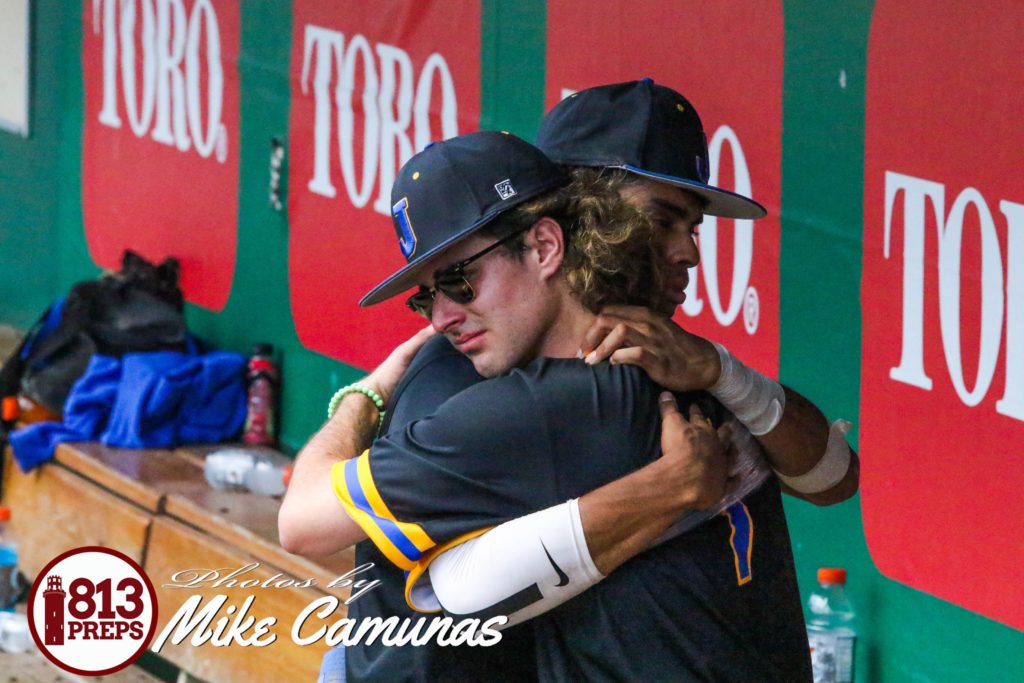