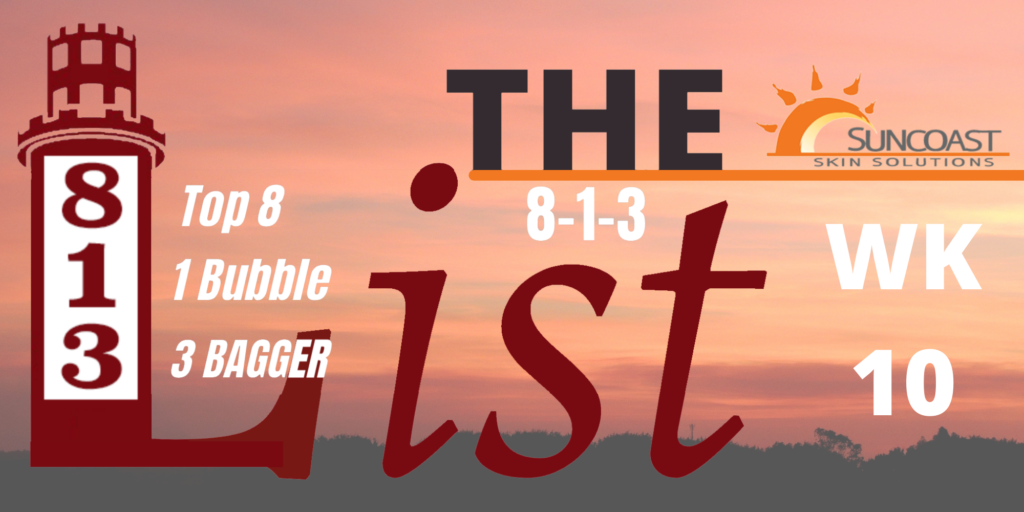 Berkeley Prep wrapped up Week 10 with wins at Carrollwood Day and against Tampa Prep, and will head to top-seed Calvary Christian for Class 3A-Distrct 6 play this week. The Buccaneers will take on Clearwater Central Catholic in Tuesday’s semifinal game at 4:30pm. Seven Berkeley Prep hitters have reached the 20-hit mark for 2022, and the team has 27 home runs and 46 doubles.

The Raiders won five-straight to close the regular season including a 15-4 against Blake, and a win against Hillsborough last week. Jackson Van Der Zee hit his seventh homer in the win against the Terriers. But it’s a team ERA of 1.35 and 217 strikeouts that has been leading the way for the Raiders on the year, as an underclassmen-heavy rotation has dealt. The Raiders are the No. 2-seed in the 7A-6 tournament, and kick the tourney off in a big way at home with rival Durant on Tuesday night at 7pm.

Three Wolves pitchers held Sickles off the scoreboard in Newsome’s 1-0 win last week, with Friday’s game against King being halted mid-game due to rain with the Wolves in control. Newsome seniors Lucas Phelps and Evan Wainman have been leading the pack this season, while Evan Dempsey (5-3, 2.50 ERA) has paced a solid rotation on the year. The Wolves had a 3-3 district mark this season, but due to the FHSAA rankings will be the top seed in this week’s 7A-6 tournament. The Wolves host tonight’s winner between Lakewood Ranch and Riverview in the district semifinal at home on Tuesday, 7pm. Robert Satin’s complete-game shutout win over Wharton was an excellent start to the week, but the Panthers fell 7-3 to Strawberry Crest to end the regular season. Plant seniors Conley Strayer (.412, 23 runs, 16 RBI) and Thomas Bolton (.333, 19 runs, 14 RBI) and 20 RBI from Satin carry the offense into the No. 1-seed of this week’s Class 7A-District 7 tournament, with Plant hosting the winner of tonight’s Steinbrenner-Palm Harbor game on Tuesday.

The Falcons ride an eight-game win streak into the Class 6A-District 6 tournament as the No. 2 seed. Leto took a pair of double-digit wins off of Middleton and TB Tech last week as junior Bryan Rivera held Middleton to a single hit in four innings last week, and upped his state strikeout lead to 96. The Falcons open district play at home against Gaither on Tuesday at 7p.m.

Rain washed out Bloomingdale’s planned regular season finale against Alonso, but the Bulls did pick up a decisive 8-0 win against district rival Strawberry Crest (it’s second win against the top-seeded Chargers this season) as Trey Clinton (six innings, two hits, seven K’s) and Jack Nolte (one inning, two K’s) held their opponents scoreless. The Bulls are the No. 3 seed in the 6A-7 tournament and host Tampa Bay Tech tonight at 7pm.

The Wildcats couldn’t get anything going against Robert Satin and Plant to start the week, but rallied twice to claim an 11-10 win against Sickles last week with sophomore Jake Turer singling in the winning run and freshman Drew Cobb going 3-for-4 with an RBI and two runs scored. Wharton will face Sunlake today at 7pm in the district play-in game.

A weird final week of the regular season as the Chargers were blanked, 8-0 by Bloomingdale to start the week, then ended the regular slate with a 7-3 win at Plant as Arjun Nimmala and Zach Redner homered, with Redner pitching six innings for the win as well. Strawberry Crest is the No. 1 see in the Class 6A-District 7 tournament, and will host the winner of Monday’s Armwood/East Bay game at 7pm on Tuesday.

After reaching the 19-win mark on the season, the Gryphons have dropped three-straight heading into the playoffs. The Gryphons have done more than enough to earn the top seed in this week’s Class 6A-6 district tournament, but need to return to the win column ASAP. A 2-0 loss to Newsome snapped Caden McDonald’s hit streak on the season, but the junior (who committed to UCF on Sunday) picked right back up with a homer and a double in an 11-10 loss to Wharton. Also, Connor Vance with 30 hits and 25 runs is a machine (looking at you Western Conference voters).

Two shutout wins over Middleton and Armwood solidified the best-ever regular season in Lennard history, with four Longhons pitchers only allowing five total hits in the two wins. Junior Alex Brazer (.339, 26 runs, 19 RBI), and seniors Keith McClain (.375, 14 runs, 14 RBI) and John Smith (.418, 24 runs, 12 RBI) lead a formidable Lennard offense, while an underclassmen pitching staff has posted a 2.42 ERA. The Longhorns are the No. 2-seed in the 6A-7 tournament and will host tonight’s winner between TB Tech and Bloomingdale, on Tuesday at 7.

Jesuit knew exactly what it was doing in booking the second strongest schedule in the state in Class 5A, and though the Tigers have eight losses – Jesuit is 4-1 in games against the members of this Top 10. Jesuit will carry the No. 1 spot into the Class 5A-5 tournament and will host the winner of tonight’s Middleton/Jefferson game on Tuesday at 7pm. Senior Jack Martinez has put together an impressive season, leading the Tigers middle infield, while posting a .329 average, scoring 19 runs, stealing nine bags, and driving in 17.