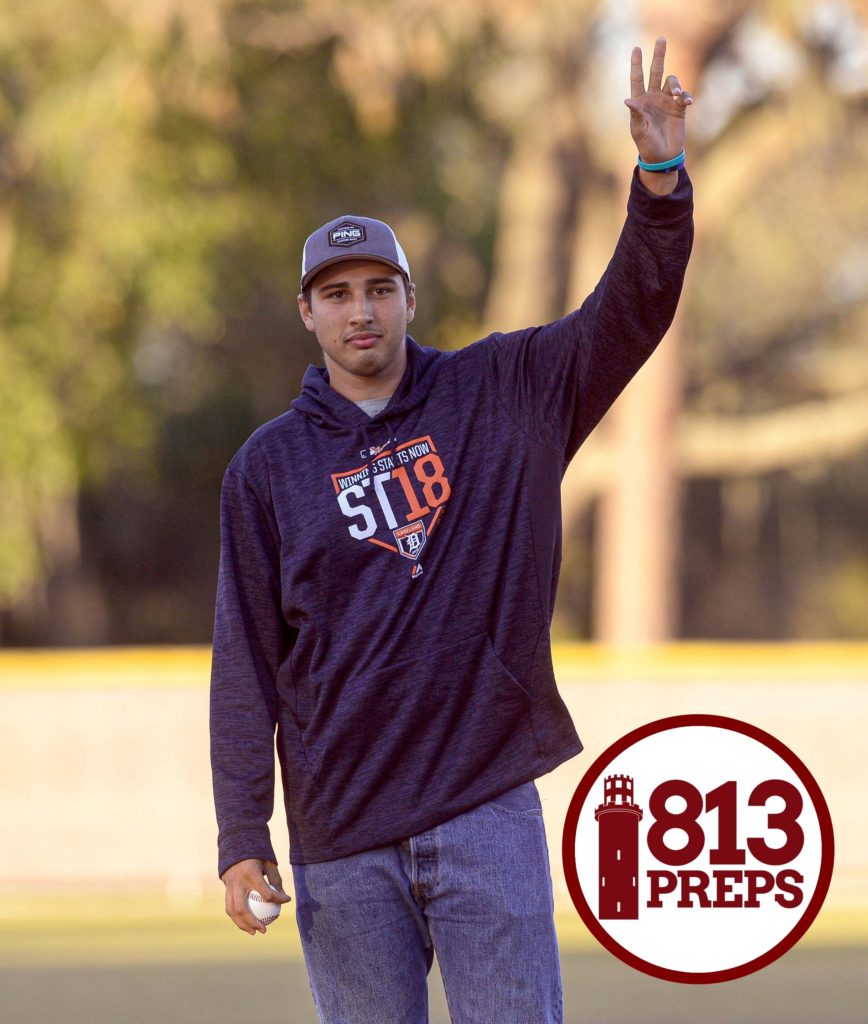 Alonso alum Alex Faedo made his MLB debut on Wednesday for the Detroit Tigers, pitching five innings in a no-decision. Here he is prior to a Saladino Tournament first-pitch in 2018 (813Preps file photo, Jason Behnken).

Alonso head coach Landy Faedo led the the Ravens to a district semifinal win against East Lake on Tuesday, in one of the handful of games made that were not affected by bad weather. However, weather issues would affect the veteran skipper – just not weather in the Sunshine State. Instead Tuesday rain in the Motor City, which forced a postponement of the Detroit Tigers game against the Pittsburgh Pirates leading to a scheduled double-header on Wednesday.

So, prior to the Ravens taking down the Eagles, 4-3 Faedo received a phone call from his son and Alonso grad Alex Faedo, that the 26-year-old righty was being called up to start the second game of the double-header in his first Major League Baseball appearance.

Faedo made his debut with a first-pitch strike to Ben Gamel, before pitching five innings for the Tigers, allowing two runs, on eight hits, walking one and striking out one in a no-decision. The Pirates would break a tie in the seventh and claim a 7-2 victory on Detroit.

We hear from Alex Faedo after he allows two runs on eight hits over five innings in his Tigers debut. #DetroitRoots pic.twitter.com/Dp3DJ2kJMz

Faedo, a 2014 Alonso grad, was 15-4 with a 0.96 ERA for the Ravens, including an 6-2 mark his senior season. He then went on to play at the University of Florida helping the Gators win the 2017 National Championship, going 7-2 with a 2.06 ERA and earning College World Series MVP honors. Faedo was selected 18th overall in the first round of the MLB First-Year Players’ Draft by the Tigers, and was added to Detroit’s official 40-man roster prior to 2020. However, his debut was delayed as he recovered from arm surgery and worked his way back.

Congrats, Alex on your debut!