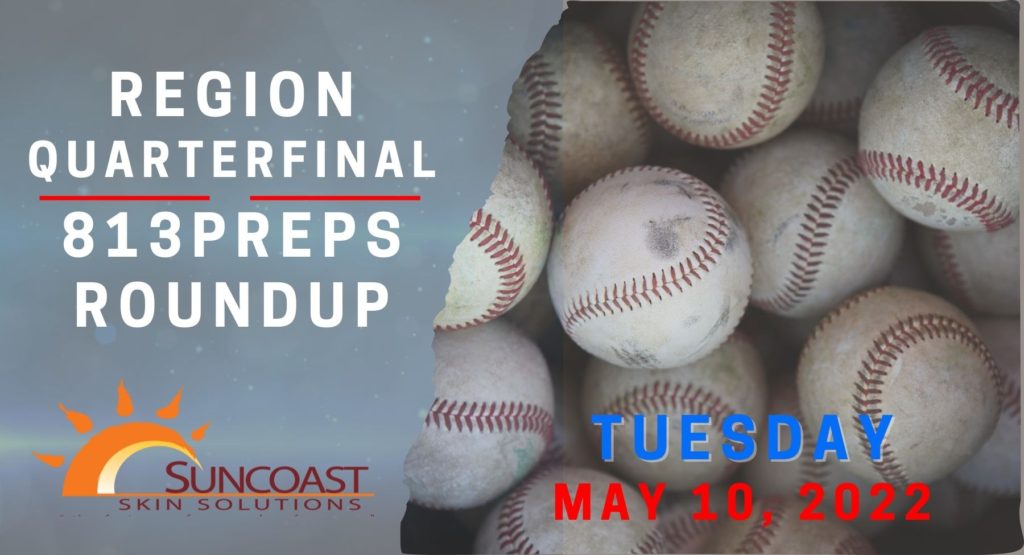 A pair of RBI groundouts from James Hankerson and Wyatt Ewanowski got things rolling steadily for Berkeley Prep on the road at Cardinal Mooney on Tuesday afternoon, but it was a fifth inning solo shot from Hankerson (his sixth of the year) in the fifth inning, and a three-run inside-the-park homer from Cade Kurland in the sixth that salted away the Buccaneers’ county-best 25th win. The home run was Kurland’s 11th of the season, and he also had a double and scored twice in the win. Andrew Jergins worked five innings, allowing one, unearned run and struck out four earning the Georgetown signed lefty his eighth win on the year. Berkeley Prep advances to the 3A region semifinals and awaits the winner of Wednesday’s region quarterfinal between Calvary Christian and Clearwater Central Catholic.

Jamie Arnold tossed a five-inning no-hitter, issuing just one walk and struck out five as Jesuit’s offense kicked things off in a hurry for a mercy-rule win against district opponent Hillsborough in the region quarterfinals. Jake Kulikowski (2-for-2, four RBI) got things going in the first with an RBI single, followed later by a two-run triple from Grant Jordan to give the Tigers more than enough to take down the Terriers. Kulikowski would add a home run to his night, while Jack Martinez was 2-for-3, scoring three times, with a double and two RBI, and AJ Nessler was 3-for-3, doubling twice and scoring two times. Jesuit will host Seminole (winners, 4-1 at Sumner on Tuesday) in the region semifinal on Thursday.

Hollins junior Ryland Bozenhard broke an extra-inning tie with a leadoff solo home run to walk off Tuesday’s region quarterfinal win against Jefferson after the Dragons battled back with two runs in the seventh to extend the game. Joseph Fritz’s RBI single and an RBI hit from Hayden Sekanick tied the game at two, but senior lefty Jacob Green struck out three in the eighth inning to give the Royals the chance to win the game. Brady Perri was 2-for-3 for Hollins with a double and an RBI; while Julian Vargas kept the Dragons in the game with seven innings on the mound, striking out for and allowing two runs (one earned).