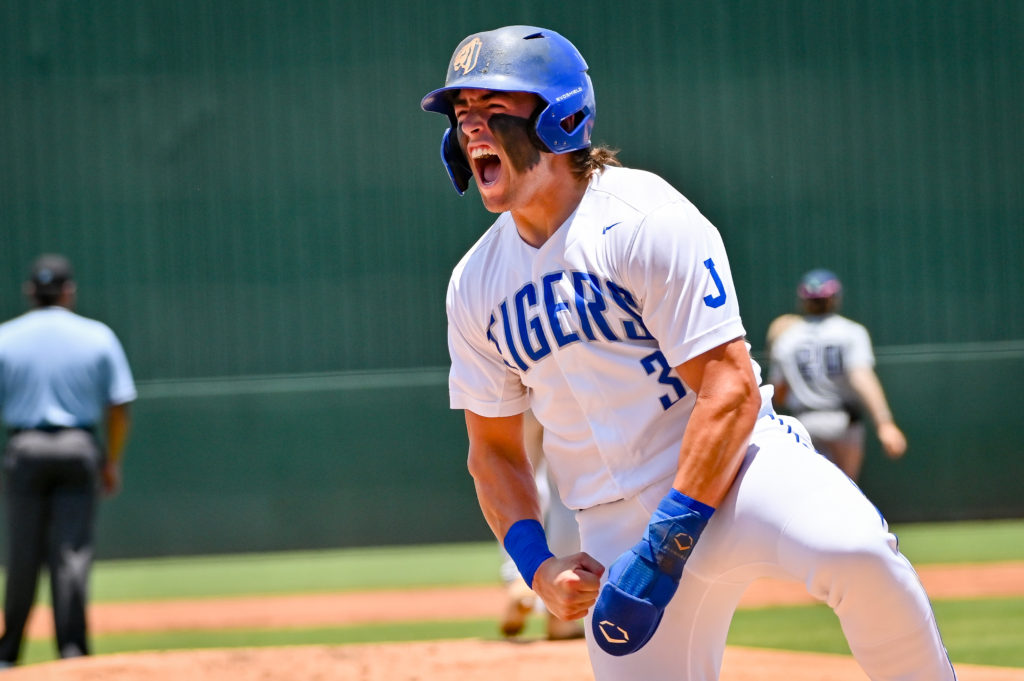 FORT MYERS – You’d think the secret would be out by now, but maybe there is just simply nothing opponents can do about it against Jesuit’s top of the order. And though they are all seemingly on fire, junior Jake Kulikowski is ablaze uncontrollably at the absolute best time for the Tigers.

Though the junior didn’t stretch his home-run streak to four games, he came about as close as possible, blasting the second pitch he saw in Thursday’s FHSAA Class 5A state semi off the rightfield wall at Fort Myers’ Hammond Stadium to drive in Jesuit’s first run, setting the pace for a 5-2 win against Naples. 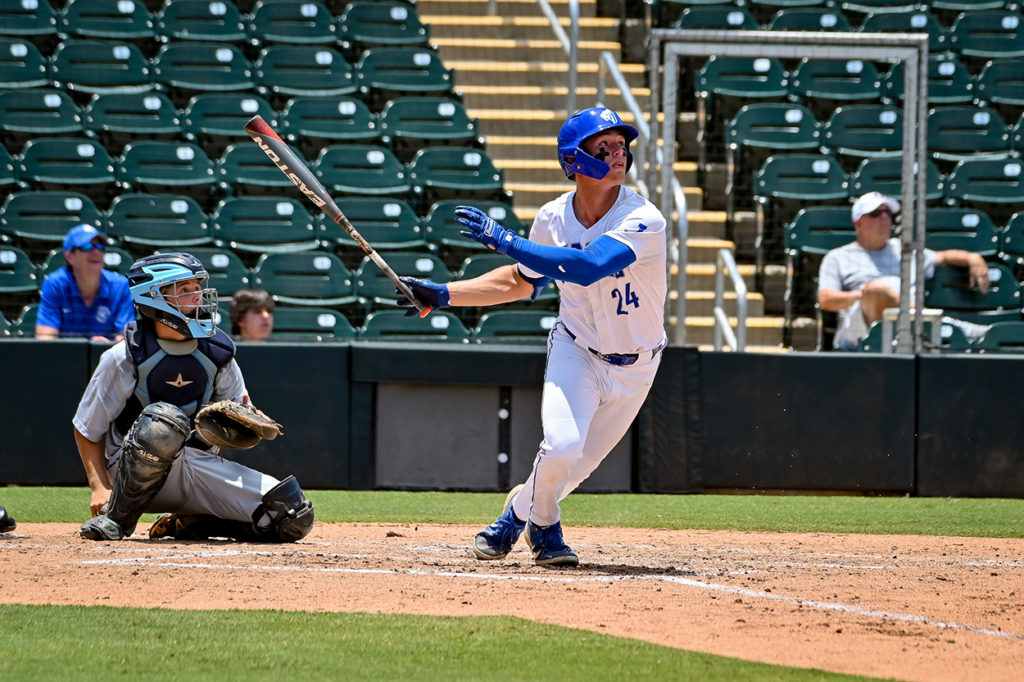 When the dust settled after the first, Jesuit (23-8) held a comfortable four-run lead on Naples and that was all that starting pitcher Jamie Arnold needed, as the Florida State signee pitched five scoreless, striking out seven.

“I usually try to work ahead,” Arnold said. “And working ahead with the lead is much easier, especially with a defense behind me that I know is going to make every play.” 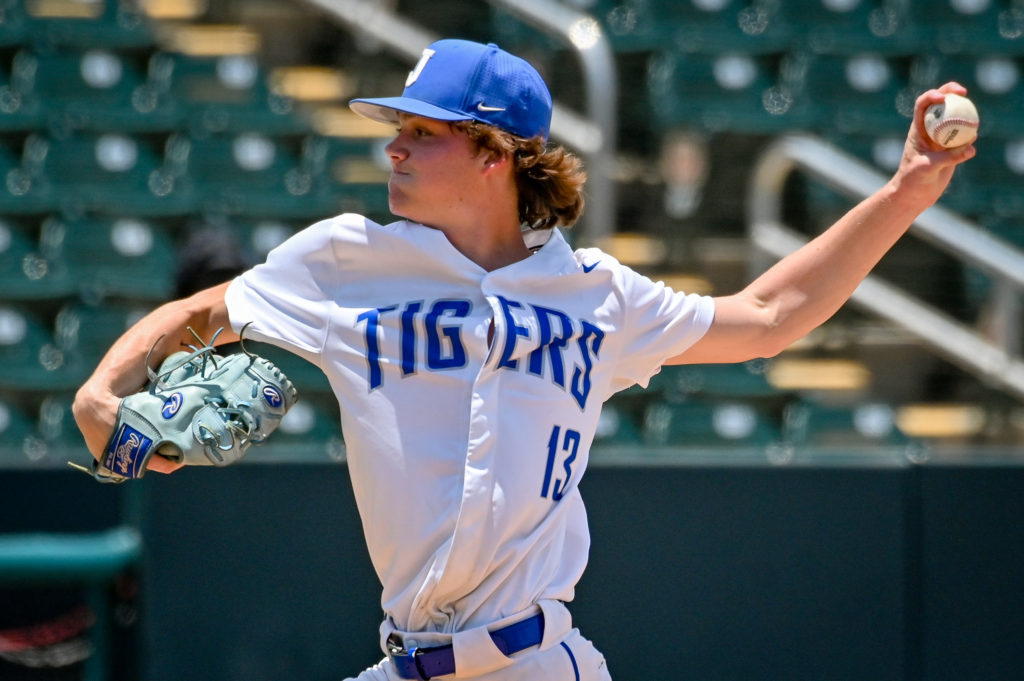 Kulikowski’s first-inning double was a shot off the bat, so much so that it might have fooled seniors AJ Nessler and Jack Martinez, who started the home-first with singles, as they jogged the bases only to pick up the pace when it hit the wall, with just Nessler crossing the plate. As he did on two homers in Monday’s region final win against St. Pete Hollins, Kulikowski unloaded on a fastball.

“Once again, I’m not complaining,” Kulikowski said of seeing the grooved fastball. “We got off to a hot start, like we have the whole postseason, scoring runs in the first inning.

“That set the tone. We’ve been ready for this one since the end of the last game. We came out swinging today.” 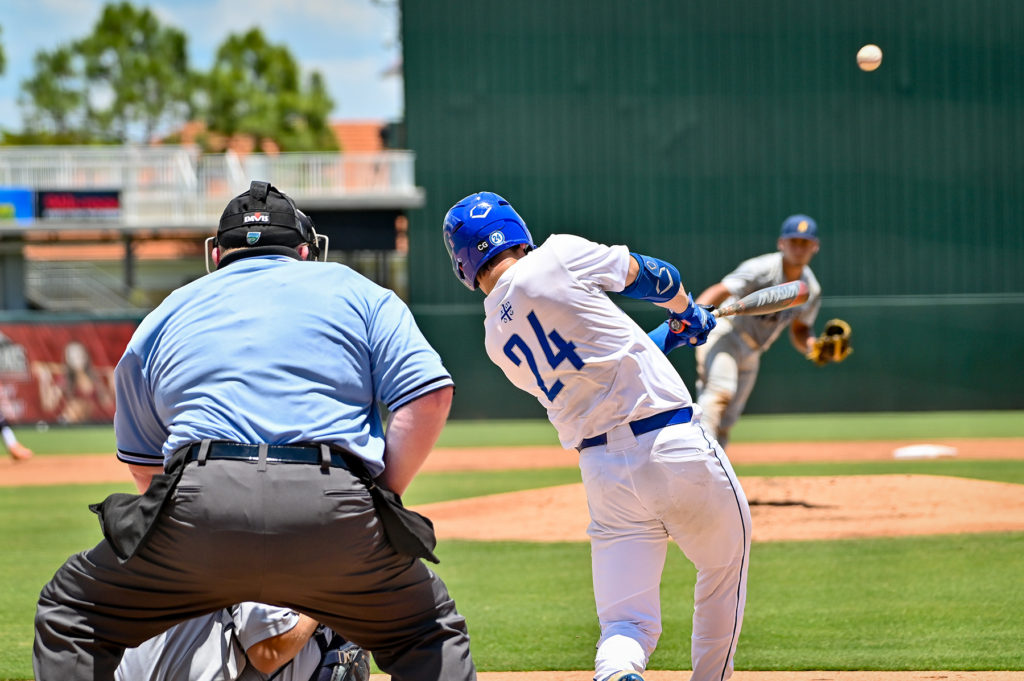 Wes Mendes barley gave Kulikowski time to enjoy his big hit, belting a two-run double the other way on the next pitch – also reaching the (opposite) wall. Mendes was 2-for-3 in the game, upping his average to .432 on the year.

The Tigers added one more in the first as junior Josh Hines turned in a huge game with an RBI single up the middle – the first of three hits in the game (season-best).

Naples (22-10) needed its Nos. 1 and 2 starters to get by region top seed Plantation American Heritage in Monday’s region final, and the seven-hit first quickly chased starting pitcher Marcos Torres after just one out. From there the Golden Eagles got an outstanding relief outing from sophomore lefty Brendan Murphy, who entered the game with just six, varsity innings this season. He delivered 4 2/3 innings of relief, mixing in two off-speed pitches well.

“We got off to a good start in the first inning and looked like it might be easy,” Jesuit head coach Miguel Menendez said. “But all the credit to Naples for hanging around, and that little lefty they brought in did a great job keeping us off-balance.” 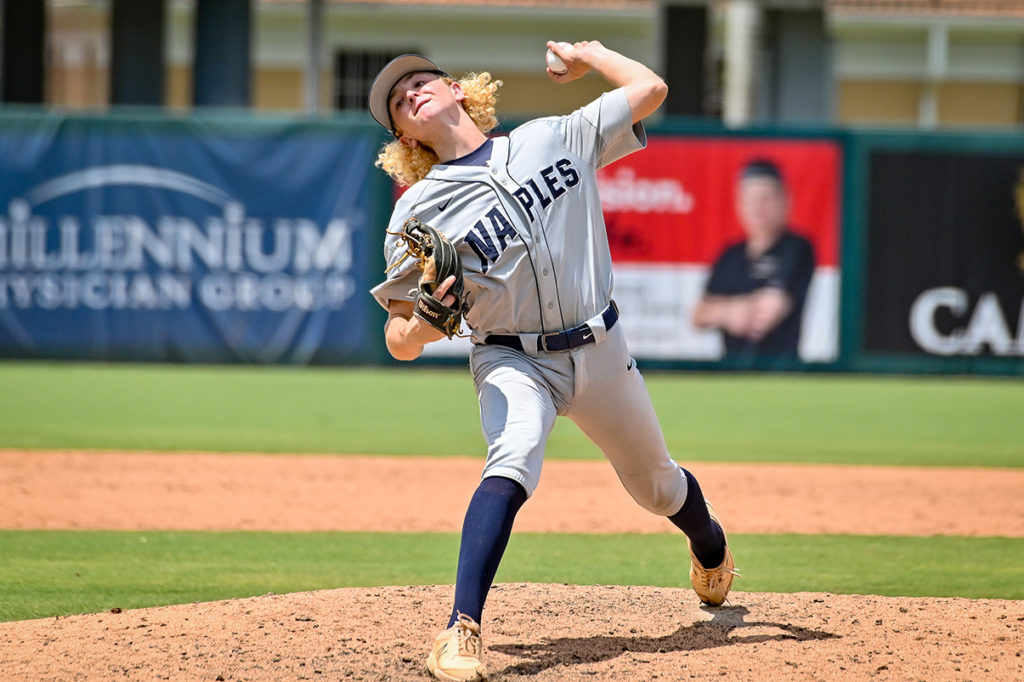 The Golden Eagles put Arnold in warm waters in the fifth, after a 15-minute delay due to the home plate umpire being overwhelmed from the heat and leaving the game. Arnold issued a free pass to Daniel Mayor to start the inning, and a two out single by Michael Graziano pushed the runner to third. But the rally attempt was momentarily delayed as Arnold got a groundout fielder’s choice to shortstop to end his Jesuit playing career after 102 pitches.

“I love the way (Jamie) battles,” Hines said. “Sometimes he’ll get behind in the count, but he always finds a way to fight through. Look at what he did today – they worked counts, and give them all the credit, but he battled and shut them out.

“It makes my job easy to have guys like this. I just have to sit back and catch strikes.” 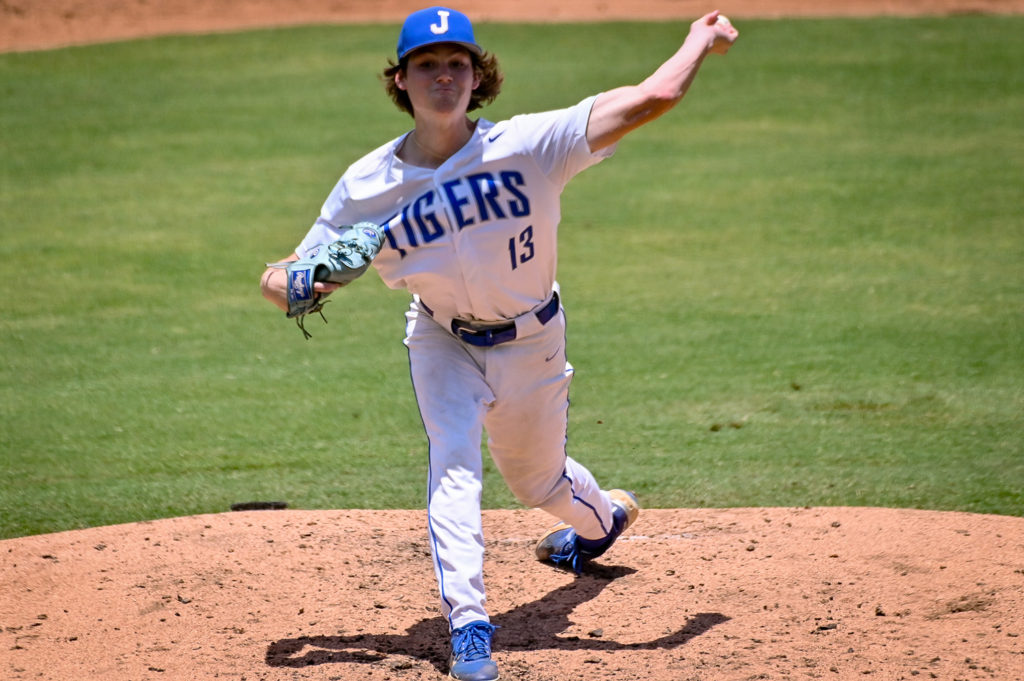 Jesuit senior starting pitcher Jamie Arnold improves to 7-3 on the season. The Florida State signee has 91 strikeouts this season (photo by Mike Gallagher).

Arnold has been outstanding this postseason, pitching in four games since the start of the district tournament. In the District opener, the lefty allowed a third-inning single to Jefferson’s Hayden Sekanick then pitched 14-straight (scoreless) innings before yielding another hit to Naples in the fifth. He ends his tenure at Jesuit (Menendez saying the senior will be “in street clothes on Saturday, so we can dress another pitcher”) with a 7-3 record in his senior season, with a 2.02 ERA and 91 strikeouts. 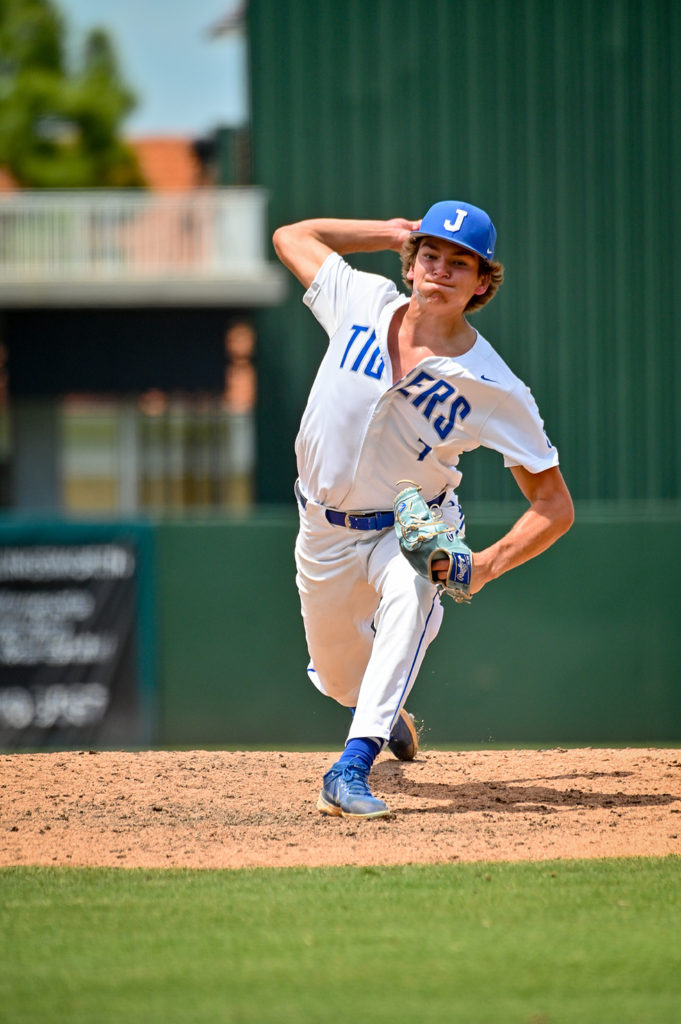 “It has been ridiculous,” Menendez said about Arnold. “I haven’t told him this, he’s thrown 16 innings this post-season and those are the first hits he’s give up in four games – and we probably shout have caught the first one … two hits, no runs, I mean, you can’t ask for any better way to end his Jesuit career.”

It was the sixth where Naples finally got things going, as junior reliever John Abraham allowed the first four runners to reach, including an two-run double to the wall in the corner of left field from Reilly Witmer. But Abraham steadied himself and struck out two, and third baseman Grant Jordan left a runner in scoring position with a leaping snag of a line drive.

“That was a big one,” Menendez said. “John was scuffling a little … Grant made a really good play, but he has done that all year, since returning from a concussion and solidifying our defense.” 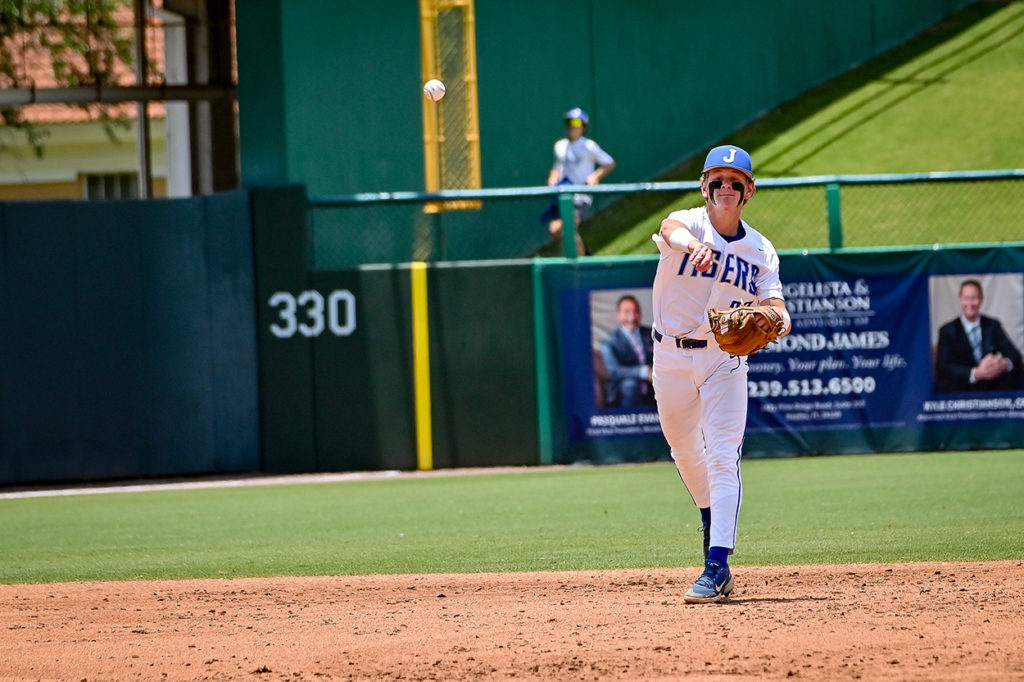 The Tigers answered the Naples runs with a big insurance run when Hines led the home-sixth with a single, and as the catcher was relieved by courtesy runner Dariel Pirela – who scored when pinch-hitter Jake Rupp chopped a ground ball single into right. 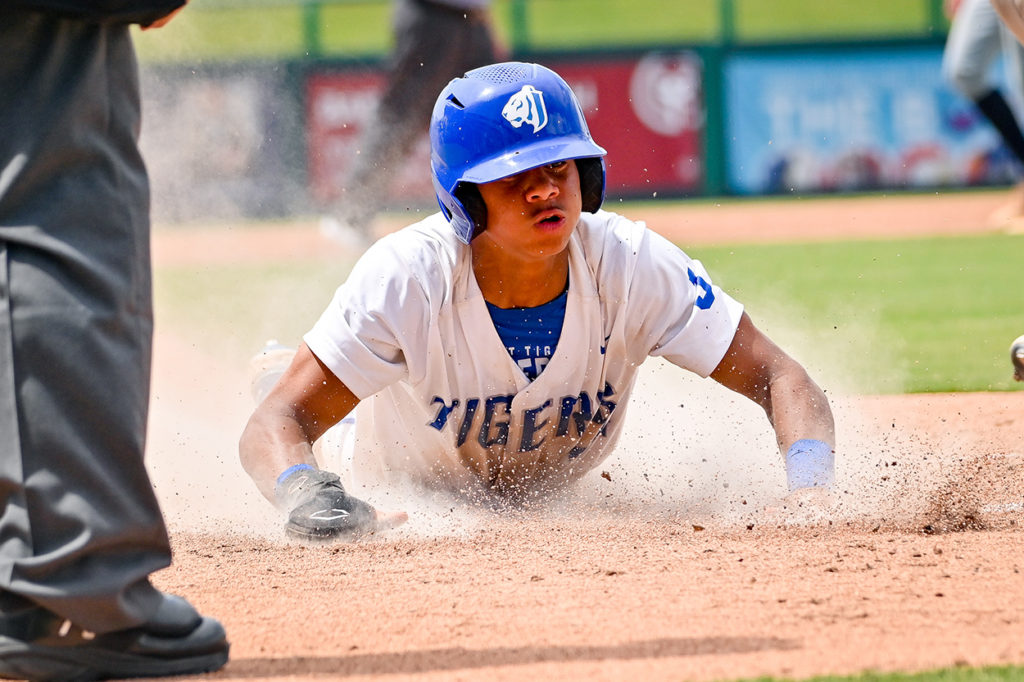 Sophomore Dariel Pirela slides across the plate for an insurance run provided off the bat of Jake Rupp in the sixth inning (photo by Mike Gallagher).

Abraham returned to start the seventh, but Graziano and Jason Bello started the final inning with singles and forced the Tigers to move to Saturday’s planned starter – Mendes. But those plans don’t face too much of a change as Mendes needed just 10 pitches to strikeout a pair, sandwiched between a rope from the catcher Hines to get a runner trying to steal third. 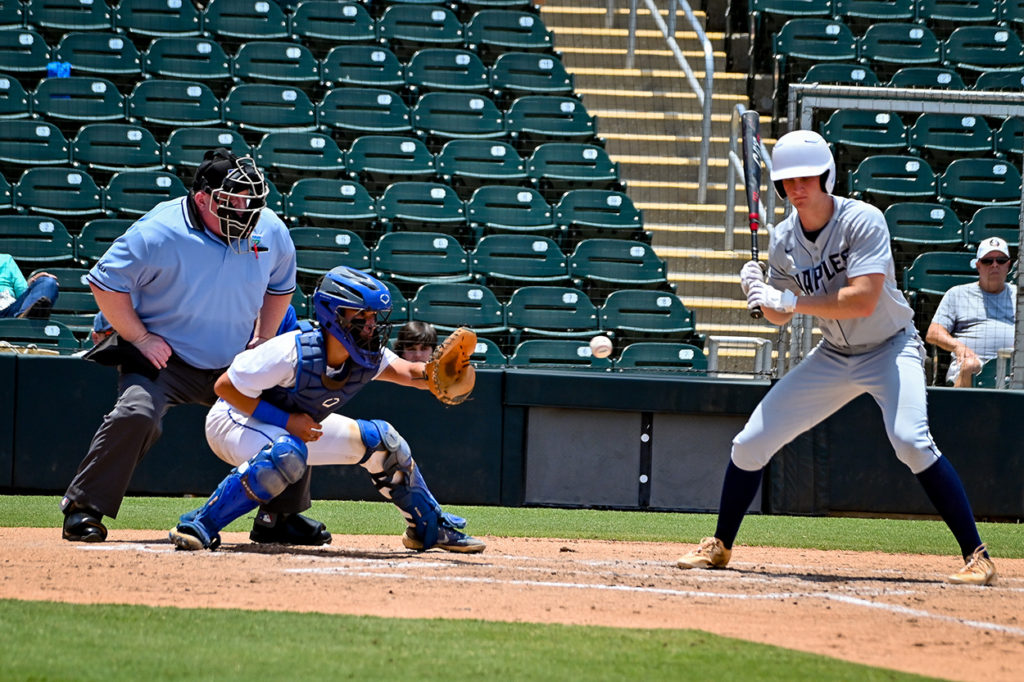 Jesuit junior backstop Josh Hines was 3-for-3 with an RBI and hosed a runner trying to steal third in the seventh inning (photo by Mike Gallagher). 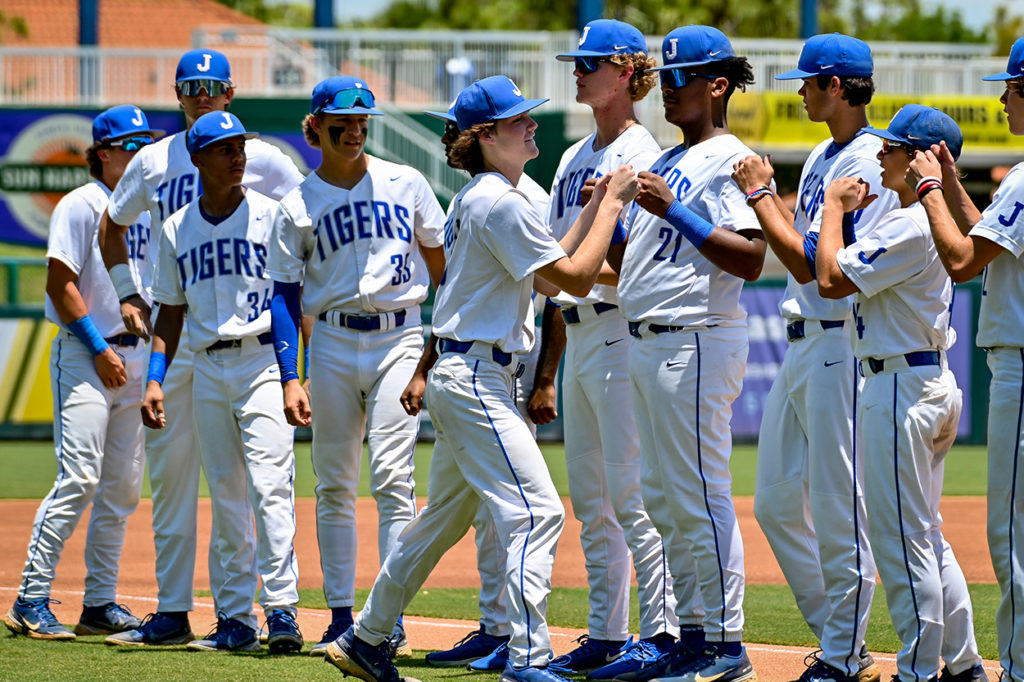