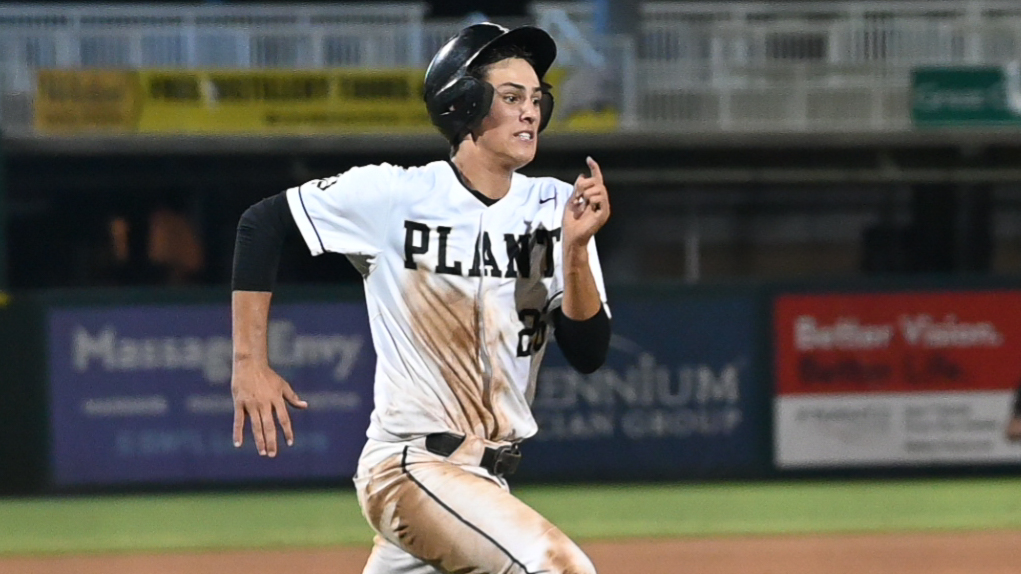 FORT MYERS – The uniqueness of competition is that by the thinnest margin it can be the most glorious, or the cruelest of experiences. For the Plant baseball team, a team that came into the 2022 season with few outside the program expecting greatness, the Panthers took respect the hard way – the team pitched magnificently, played lights-out defense, and got top-to-bottom consistent hitting.
Unfortunately, into the very early hours Saturday morning Plant’s spectacular season came to an end in a tough, 3-2 loss to Palm Beach Gardens in the FHSAA Class 7A state semifinal game.

In an incredibly tough moment, Panthers senior captain Conley Strayer found clarity as he stood outside the dugout moments after the final out, just after 2 a.m.

“This one loss won’t define us,” he said. 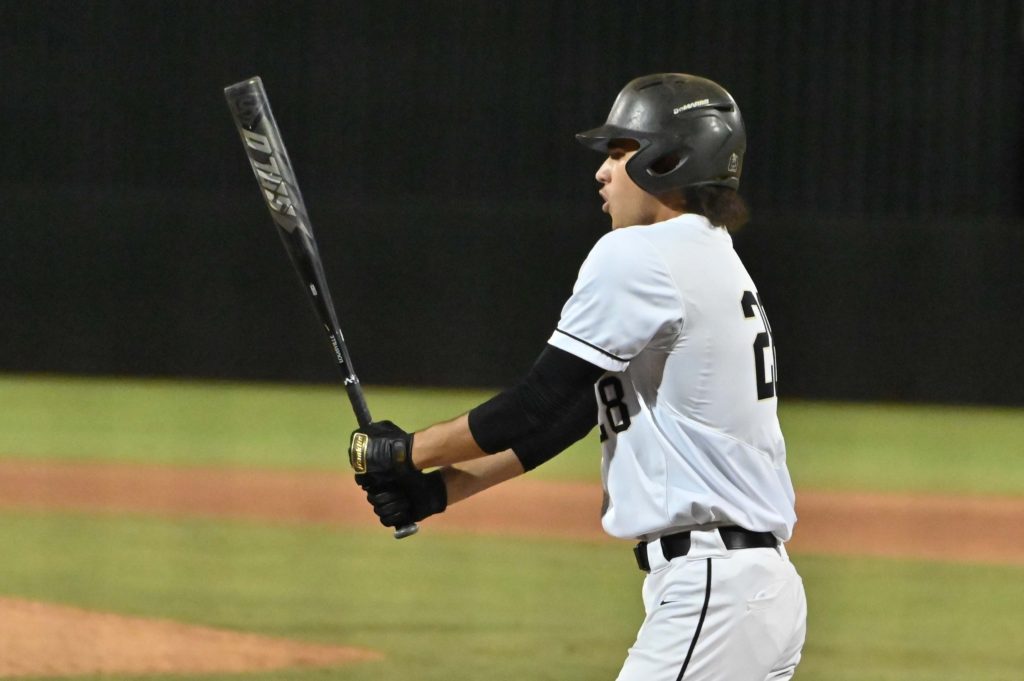 Senior Conley Strayer approaches the plate prior to driving in his younger brother in the fourth inning on a single (photo by Mike Gallagher).

And though the record books will read “state semifinalist,” when the Panthers hoped for gold medals, Saturday morning’s game was a battle fitting of a 23-7 season, which featured a Saladino Tournament championship, as well as a district and region title.

“We had to earn it, and it’s all about how you finish,” Plant skipper Dennis Braun said. “And I’m pretty proud of the way they did that.” 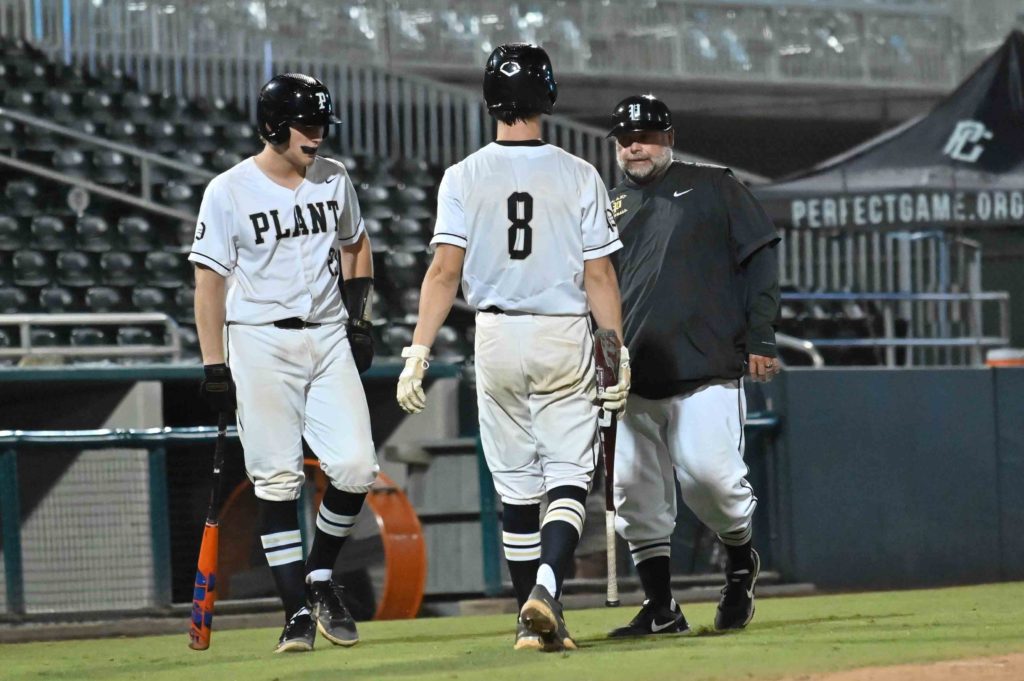 The Panthers fell behind Palm Beach Gardens (22-7) in the second inning as starting pitcher Blake Mathews led off with a single, and in a rarity on the season, Plant’s defense slipped for the first of four errors in the game. The error allowed the first two Gators to reach, a sac bunt moved them into scoring position and Enzo Vertucci lined a two-run single into left field on a hit-and-run.

“Obviously, our defense, which has been very good for us, came up a little short,” Braun said. “If that was there, it is probably a different game.”

“I can’t describe the feeling of this year playing on this team with him,” Conley said of playing his final high school season with younger brother Cash. “To grow up hitting with him every day, and be able to drive him in (during) a game like this, it’s something I will never forget.” 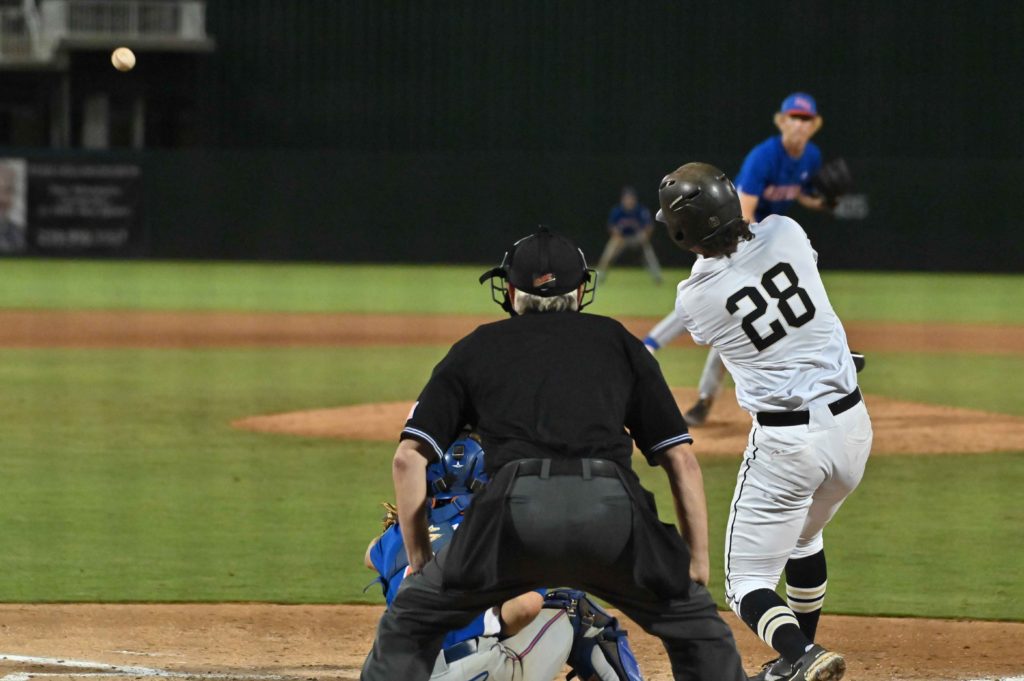 Conley Strayer sends an RBI single into left in the fourth inning (photo by Mike Gallagher).

The thinned, one-run lead was stretched out in the Gators fifth, when Jayden Hylton started the frame with a triple and scored on an AJ Hunerberg sac fly. 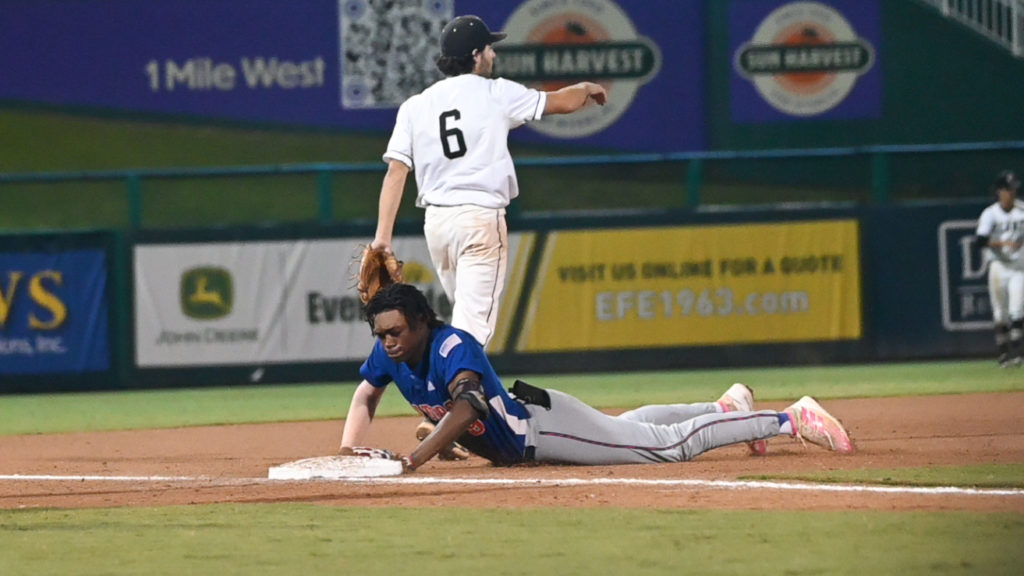 Jayden Hylton slides into third on his leadoff triple in the fifth. He would score the deciding run for the Gators.

Plant trimmed the lead again as Cash Strayer again led off with a single, stole second and scored on a single from junior Bryce Pelleriti. And with the game on the line in the final inning, senior Tanner Gilbert lined a single to center, and Cash Strayer’s single put the winning run aboard and tying run at third. But that was as close as it would come for the Panthers as a ground ball to short ended the game and the season for Plant.

“If that is how you are going to end every game, with the tying and winning run on the bases and those are your losses,” Braun said, “well, everyone knows that this is a hard game.

“I couldn’t be happier with this team out of any I’ve coached here at Plant.” 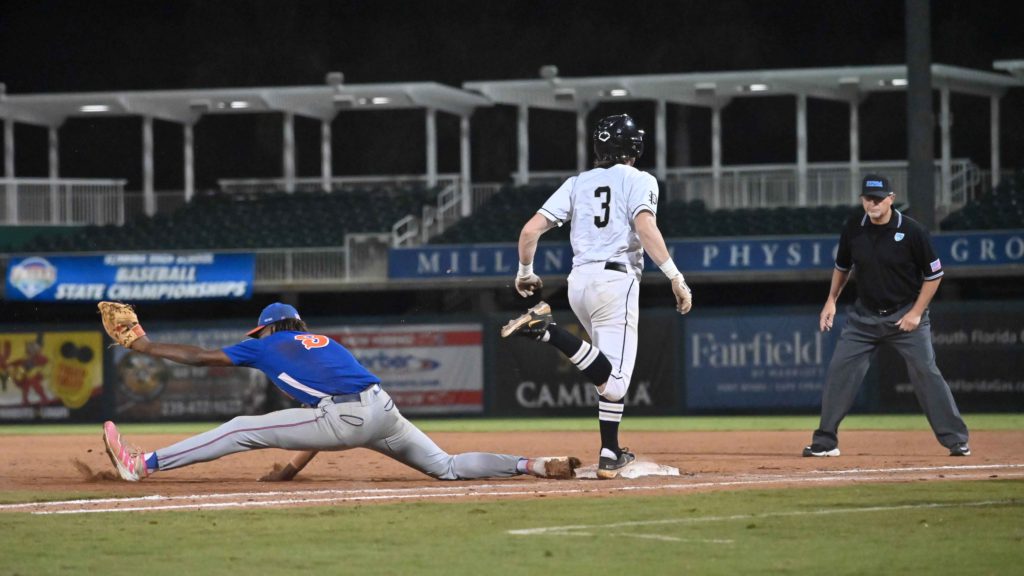 Palm Beach Gardens 1B Jayden Hylton stretches to catch the final out of the 7A state semifinal (photo by Mike Gallagher).

With a number of key returners for next season, it is hard to single out the brightest spot for the future. But the younger Strayer’s performance stood out of particular note to Braun, now in his 18th season with the Panthers.

“It seems like he hits at least two hard balls for us every game – he’s just so consistent,” Braun said of Cash Strayer. “To do that as a freshman, even with (Plant alum and current Houston Astros slugger) Kyle Tucker, I can’t think of someone who has done a better job as a freshman.” 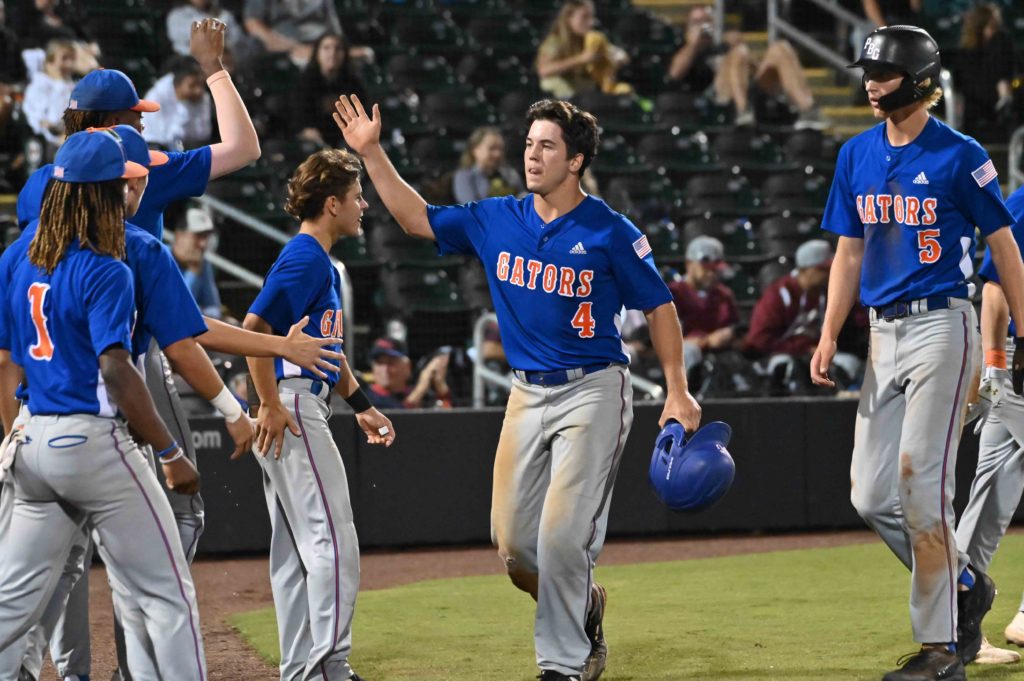 The four errors spoiled another tremendous start for junior lefty Robert Satin, who fell to 8-2 on the season, while allowing three runs (one earned) and striking out five. Junior righty Mike Hawks would move to the mound from short, delivering two hitless innings of relief. 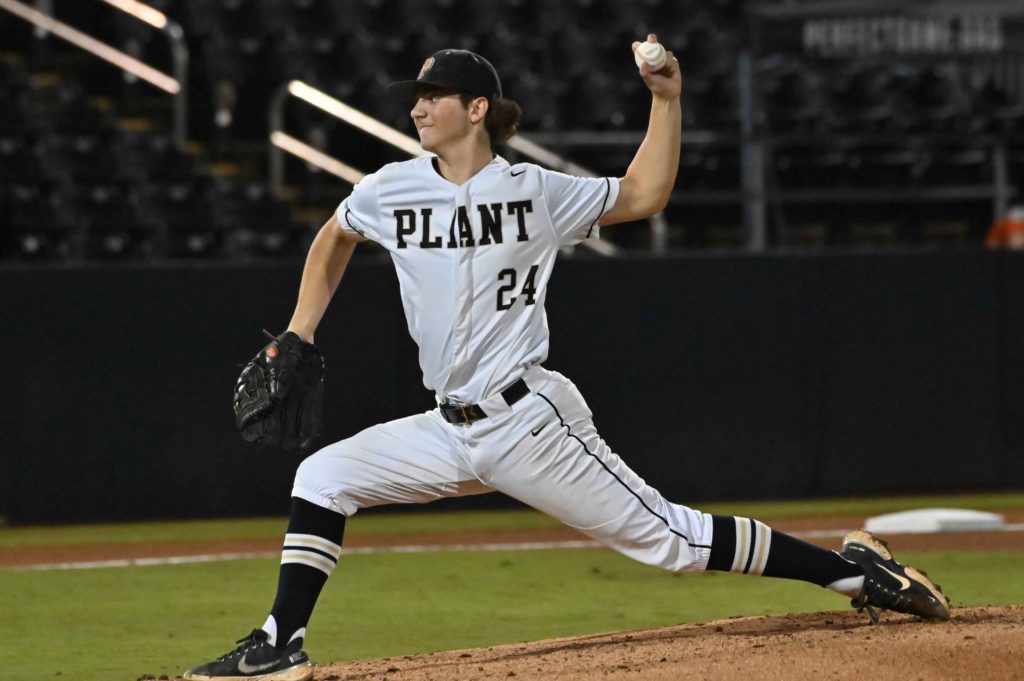 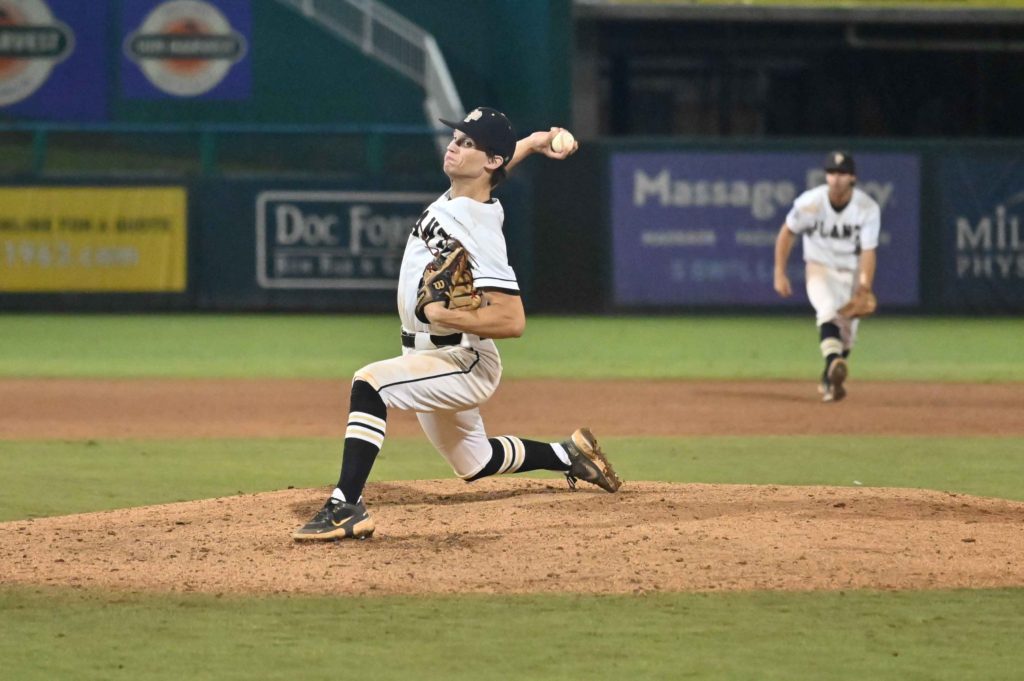 “I thought Satin threw well and we made a couple of errors behind him,” Braun said. “Then Mike came in and did what he has all season. We had three guys (including senior Thomas Bolton) do everything we could have asked of them on the mound. They threw strikes, kept us in games and gave us a chance to win. Those guys did it again for us tonight.”

The loss, and likely the late hour, made the post-game Plant dugout a sea of stunned faces, but again it was the elder Strayer with some perspective:

“At the beginning of this year, no one expected much from us,” Strayer said. “To win the Saladino, to win districts, to win regions and to be here and fight like that … I’m just so proud of this team. We are a special group.”

“We got beat by a good team, we got a lot of these guys coming back,” the coach said, “and we’ll get better from this.” 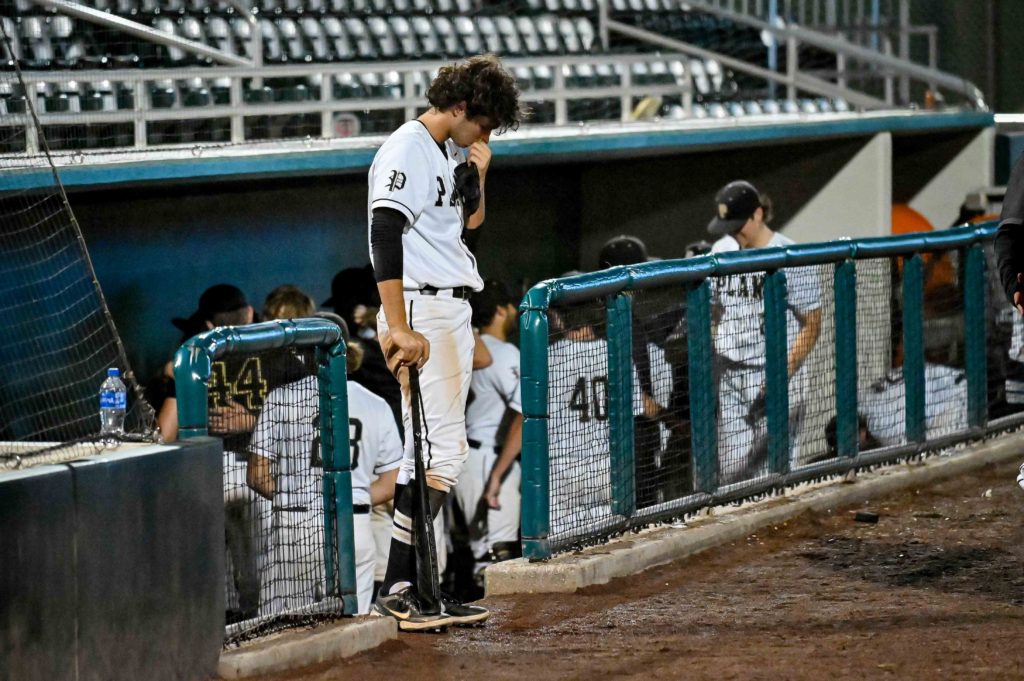 Plant senior Conley Strayer takes a moment after the game, before speaking with the media (photo by Mike Gallagher).