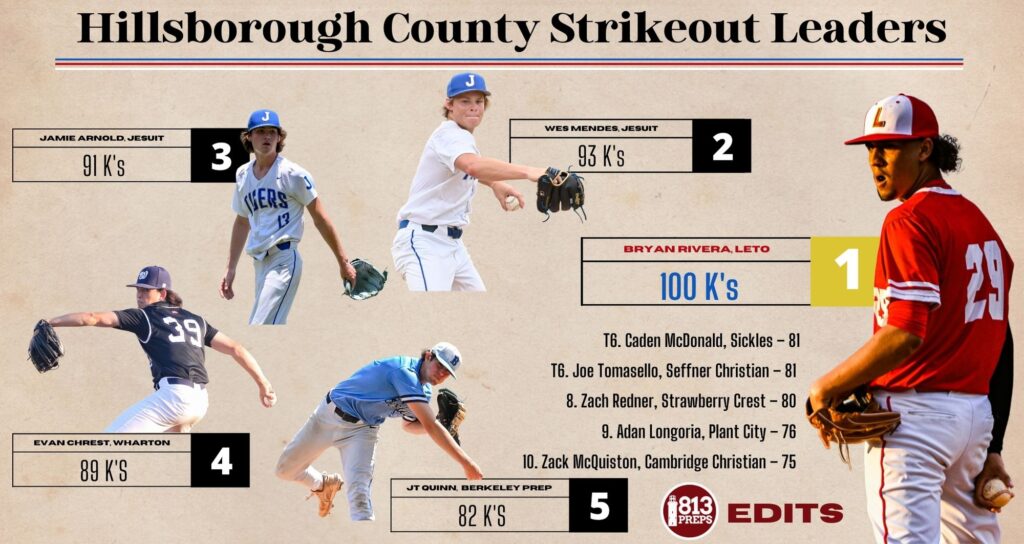 Grab some pine, meat. Our leaderboards continue today with the 🔥ballers across the 813. A lot of frustrated hitters watched on as just 60 feet, six inches away these hurlers sent them back to the dugout.

“Bj is a very intelligent pitcher, he commands the strike zone well and can throw in and out of the zone, which results in his ability to stack up his K’s,” Falcons head coach JJ Pizzio said. “All season he gave us all he had on the mound, with his intelligence, work ethic, and desire to win that makes him, in my evaluation, the best pitcher in our county. He is only a junior so I am sure his goal is to be even better next season and prepare himself for his college career at High Point.”

Finishing in the next two spots, eclipsing the 90-strikeout plateau and leading Jesuit to a Class 5A state title were No. 2 Wes Mendes, who’s 93 strikeouts included an 11 K performance for the junior in the Tigers state championship win against Melbourne Eau Gallie. Finishing right behind Mendes, was senior teammate Jamie Arnold, who finished the season with 91 strikeouts over 66 innings, including striking out seven and picking up the state semifinal win over Naples.