Berkeley Prep controls the trenches in win over Plant 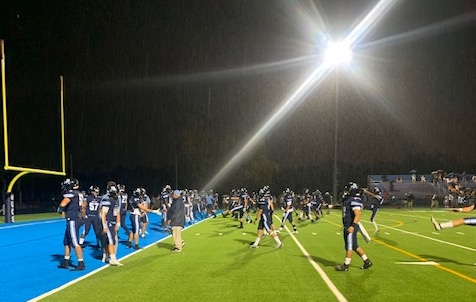 TAMPA – It was only fitting that on a night in which weather delayed the start of the game by 90 minutes that Berkeley Prep would be led to victory by some thunder and lightning.

Sophomore running backs Joseph “Jojo” Troupe provided the rumbling and Dallas Golden flashed across the field, combining for 278 rushing yards and four touchdowns as the Buccaneers took down Plant 33-21, in the first regular season on the field turf at newly christened Bisk-Turkel Field at Stanford J. Newman Stadium.

After falling to Clearwater Central Catholic in week one, the Bucs looked to start fast and Golden made sure they would, by outracing the Plant defense on a 36-yard touchdown on just the second offensive play of the game for Berkeley (1-1) to take the quick lead less than three minutes into the contest.

The rest of the quarter was dominated by the Berkeley defense, as edge Keon Keeley harassed Panther quarterback Trey O’Malley (14-of-29, 179 yards, two TD’s, INT) repeatedly, notching three of his four sacks in the frame. The defense even lit up the scoreboard as a Plant pass behind the line of scrimmage was mishandled and junior linebacker Gavin Holman scooped it up and returned it 25 yards for a score. 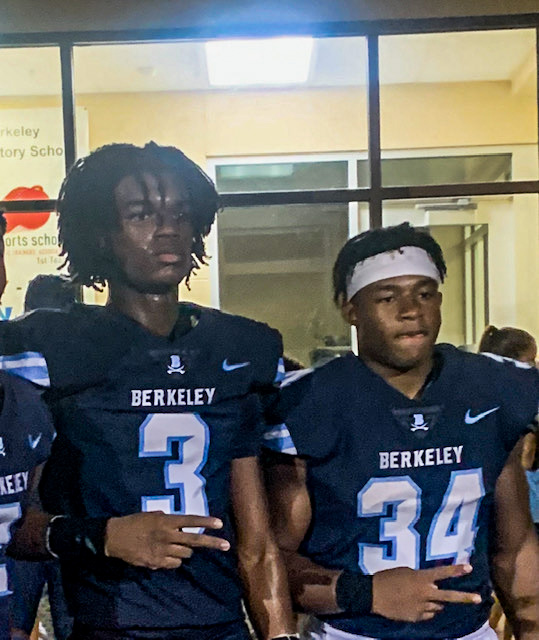 Berkeley Prep’s sophomore running back tandem of Dallas Golden (No. 3) and Jojo Troupe (No. 34) combined for 278 yards on the ground and four rushing touchdowns in the Buccanneers win against Plant.

With a 12-point lead and in the light but steady rain, it was obvious that Berkeley head coach Dominick Ciao would rely on his ground attack to keep Plant (0-2) at bay. With a steady diet of Troupe runs inside and Golden on the edges, the Bucs would add another touchdown from Golden as time expired in the first quarter.

While it may have seemed to be heading towards a blowout the first quarter’s end, the Panthers had other ideas.

Plant started the second half by forcing a fumble, recovered by junior safety Brayden Sullivan. O’Malley took advantage of the miscue by using the Bucs aggressive approach against them with a series of screens and short passes, eventually getting in the end zone with a shovel pass to Jacquez Kindell from 12-yards out.

The Panther defense seemed to be adjusting in stifling the run and when O’Malley connected with Darrion Jenkins a series later, Plant found themselves down by just six points midway through the third quarter.

It was as close as Plant would get.

The Bucs answered with a 10-play drive capped off by a Golden (19 carries for 199 yards, three TDs) three-yard plunge just as the third quarter ended to seize back the momentum.

Troupe (24 carries for 79, TD) and Plant’s Waltez Clark would each add late rushing touchdowns to cap the scoring.

The Bucs will look to start a streak as they visit Ocala-Westport next week, before a big match with Tampa Catholic on September 23rd; while Plant has been competitive with a pair of 2021 state runner-ups in its first two games and will look to get into the win column next week at King.