Caldwell’s takeaways are “Cherry” on top in East Bay win 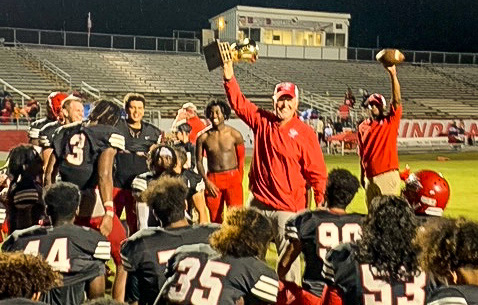 Correction: This story has been corrected from an earlier edition, which incorrectly stated that the win marked 14-straight for East Bay, when it has only been 12-straight, with the two teams not playing each other in 2019, and Riverview last winning 28-20 in 2009. The caption under the photo above has also been corrected. – J. Guthrie, editor

“Turnovers to me are the difference between winning and losing,” said Gottman, now in his second year at the helm of the Indians. “If you don’t, some other freak things really have to happen.”

Fortunately for Gottman, he had DeAnthony Caldwell patrolling his secondary.

Caldwell, 6-foot sophomore picked off a pair of passes in the second quarter, returning one for a touchdown as the Cherry Cup stayed in Gibsonton for the 13th-consecutive year in a hard fought and sometimes chippy 21-19 win over rival Riverview.

The night started out with a bang, literally and figuratively as the sound of a popped transformer left the stadium dark for about 30 minutes. 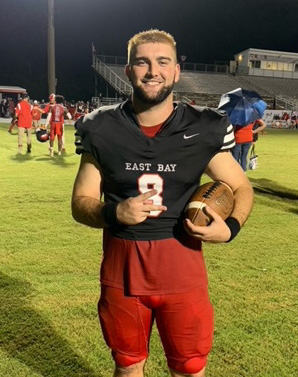 When the game began, it was the Indians’ offense making noise, as senior signal caller Nathan Carter (15 carries, 91 yards) called his own number on a 14-yard touchdown run to give East Bay the early lead.

A big kickoff returns by Harrison Hensley set Riverview up on the 15-yard line, but as was the story throughout the game, the East Bay (3-0) defense held tight, and a missed field goal was the first of several missed opportunities for the Sharks.

Riverview (3-1) eventually broke through when junior quarterback Aaron Turner answered his East Bay counterpart with a 30-yard touchdown run of his own in the second quarter. A missed extra point preserved the Indians lead.

Later in the quarter, it was Caldwell who grabbed the errant pass from Turner and headed for paydirt. 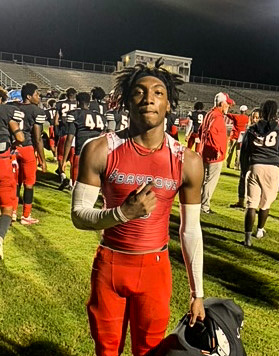 “We were in cover-six, and I was over the top, and I saw him throwing down to the out route,” said Caldwell. “I saw it get tipped and I came under it. I saw one defender and then green grass. I had to get the points up there.”

It may have looked like instant replay to those in the stands as Caldwell intercepted a similar pass on a similar area of the field, thwarting a drive and keeping the Sharks down by eight going into the half.

East Bay would start the second half much like the did the first, with an opening drive touchdown. This one courtesy of sophomore Armando Becerrill on a 24-yard sweep.

While the score could have killed the spirit of many teams, the Sharks under first year coach Tony Rodriguez showed no quit.

Riverview marched down the field with sophomores Andrew Lee and Elijah Lespinasse and finished on a six-yard score by junior Dontavious Shoats. Down by nine, the Sharks opted to go for a two-point conversion that failed and would ultimately prove to be the difference in the contest.

In the fourth quarter, Carter rolled an ankle and left the game for a series but returned, as would be expected from a senior leader. He would methodically run the offense in tandem with junior bruiser Jaelin Sneed (14 carries, 60 yards). The Indians took just enough time off the clock that even with a late score by Harrison Hensley, the Sharks ran out of time.

For Carter, in a heated game with several personal fouls and a lot of trash talking, it was important to heed his coaches’ words and keep his team’s emotions in check.

“I give them their props. They came out and played a great game,” said Carter. “I told my team to keep their emotions down, and not get too high. When it gets hot, you start to see a lot of penalties.”

The Sharks will rest next week and look to get back on track in two weeks when they host Newsome; while the Indians look to go 4-0 when they travel into Tampa to face Jefferson next week.