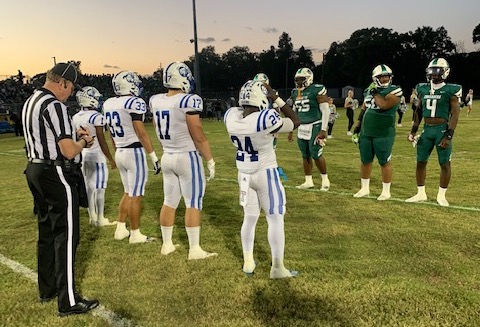 Game Recap- The Streak Is Over

It was the blocked punt heard ‘round the 813.

Trailing by six points with just under four minutes to go in the fourth quarter, Tampa Catholic All-Everything senior Lewis Carter blocked a punt that was recovered in the end zone by TJ Moore for a touchdown to tie the game. Paul Desousa added the extra point as Tampa Catholic erased a 13-point, fourth-quarter deficit and the Crusaders held on to secure a dramatic 20-19 come-from-behind victory, breaking the Tigers 22-game winning streak in the series. 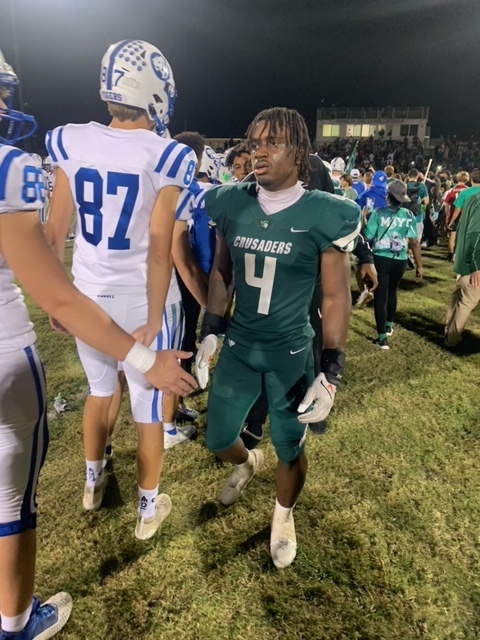 Carter, the consensus 4-star Oklahoma commit was all over the field for Tampa Catholic (8-1). The two-way star roamed the field from sideline to sideline in his role as a linebacker, setting the defensive tone early with a hard tackle on Tiger star running back Joquez Smith, who the Crusaders limited to 62 yards on 22 carries. On offense, Carter had a 39-yard run in the first quarter and was tackled by his facemask, setting up Tampa Catholic inside the 15-yard line. A few plays later, it was who else but Carter going in for a five-yard touchdown to tie the score.

“The win means a lot. It’s been a long time since we’ve beat them,” Carter said. “We practiced so hard this. It was all in the head. We just focused on our game plan. We did it as a team.” 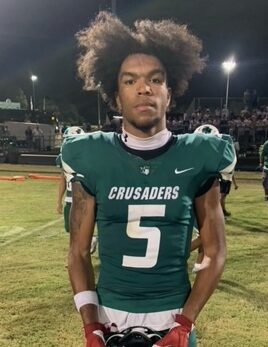 While Carter gets credit for the blocked punt, it was 6-foot-4 junior TJ Moore who outraced everyone to the end zone and fell on the loose ball for the touchdown. Prior to the blocked punt, Moore started the Crusader comeback with a 59-yard grab to get inside the Tiger 15 yard line, and had a 10-yard touchdown reception from the arm of Trey Hedden (6-for-13, 139 yards).

“I saw the ball in the air, and thought, ‘that’s mine.’ (I) had already dropped one, so I gotta catch this one” said Carter. “Getting this win is exciting. My heart’s still racing.’

Beating Jesuit (6-4) is never an easy feat, and tonight was no exception. The Tigers scored on their first play from scrimmage when freshman quarterback Will Griffin hit junior Bryson Goodwin on an 80-yard touchdown. After a pair of Jack Ferreri field goals,  it was Jesuit’s 4-star linebacker and Georgia commit Troy Bowles stepping in front of a Hedder pass and taking it to the house for a pick-six,  staking the Tigers to a 13-point lead before the Crusader comeback. 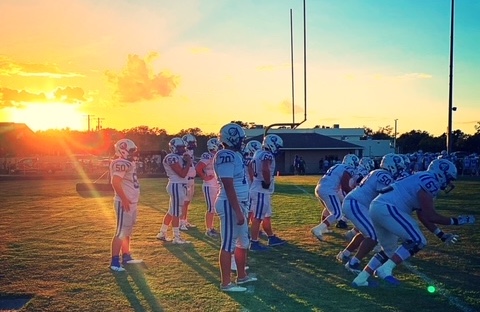 Return of the Mac

The win was especially sweet for Tampa Catholic’s head coach Jeris McIntyre. The Crusader alum who starred at Auburn and played professionally in the NFL and in Europe, has seen his team improve each season. The victory over the Tigers was the culmination of plenty of hard work by his players and assistant coaches, as well as a group of senior that stuck with the program.

“It means a lot. I’m so happy and excited. It’s been a long time. I knew eventually the streak would have to end,” said McIntyre. “I’m so proud of the players, they fought so hard. The seniors that stayed at TC all four years. Guys like King Andrews, Chris Luna, Troy Black, Jeremy Patterson, Carnell Herring. They’ve been great guys and good football players.”

Both Tampa Catholic and Jesuit are playoff-bound. The Crusaders were ranked atop the FHSAA’s Class 2M-Region 2 rankings coming into the game, while the Tigers topped 3M-Region 2. First round playoff matchups will be announced Sunday. 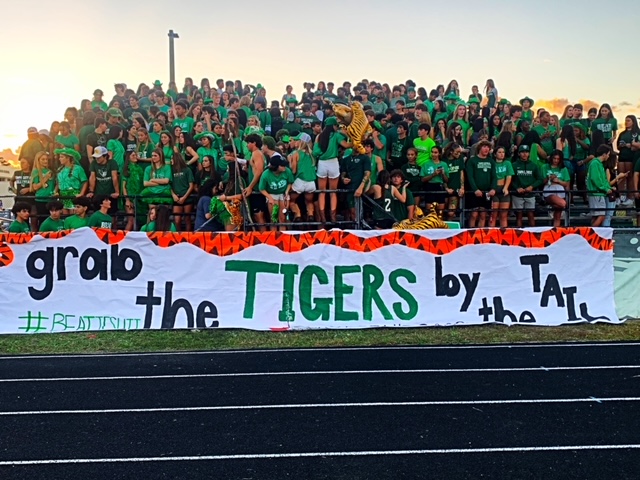