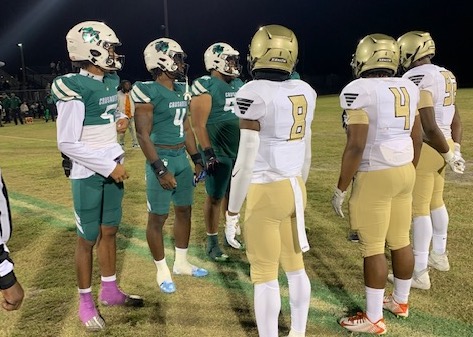 TAMPA – The tears started to flow in the seconds before the clock hit zero. The finality of it all hitting Tampa Catholic’s players and particularly its seniors, who just two weeks ago, defeated archrival Jesuit for the first time in over two decades and had aspirations of a state title run.

A last gasp to have the final say in a back-and-forth affair bounced off All-Everything, two-way standout and Oklahoma commit Lewis Carter and into the hands of a diving Amare Garrett to seal a 44-41 come from behind victory for St. Petersburg Lakewood. The Spartans (8-4) will face Calvary Christian in a 2M region final next Friday, while the Crusaders finish an excellent season at 9-2.
For much of the game, Carter and the Tampa Catholic offensive line imposed their will on the Spartans athletic front.

After Lakewood got on the board first courtesy of a 20-yard touchdown pass from Virginia commit Anthony Colandrea to Aviyon Mack-Smith, Carter (23 carries, 211 yards) answered with a 13-yard touchdown run to give the Crusaders an early lead. Tampa Catholic continued to move the ball effectively with Carter gaining chunks of yards from traditional handoffs and often lining up in the Wildcat and receiving direct snaps.

Forcing the Spartans to respect the run game allowed for openings in the passing game, and Crusader signal caller Trey Hedden took advantage in the second quarter. Hedden connected with fellow junior TJ Moore (four receptions, 73 yards) and Jamai Rutherford on touchdowns as Tampa Catholic jumped out to a two-score lead.

It appeared the Crusaders would take the lead into the half, but Colandrea (17-25, 290 yards, five touchdowns) had other plans as he connected with Shamar Rigby from 20 yards with no time remaining to cut the Tampa Catholic lead to one score going into the half.

The aerial assault continued in the third and into the fourth quarter as the teams traded touchdowns. Hedden (11-18, 188 yards, four touchdowns ) connected with Carter for 31 yards and Moore from four yards out, while Colandrea found Mack-Smith (four receptions, 101 yards, three touchdowns) twice more.

The turning point of the game came with just under nine minutes left in the final frame as Lakewood stemmed the scoring tide and forced a Tampa Catholic punt. Lakewood senior Montravious Lloyd was on the receiving end, cut left and outraced everyone to the end zone to give the Spartans its first lead since the opening quarter.

The fireworks didn’t end there, as Hedden connected with sophomore tight end Tyler Tuel over the middle from 13 yards with under six minutes left to retake the lead for TC.

But it wouldn’t last as Colandrea would answer, hittting Gage Nix from 14 yards out to take the lead for good. Florida commit Isaiah Nixon closed out the scoring with a sack in the end zone, his third sack of the game for a safety.

After the game, McIntyre reflected on the success of the season.

“It was a great season. They fought hard and did great this year,” he said.” I’m super proud of the senior class … We beat the defending state champs (Jesuit), the defending runner-up (Berkeley Prep). It came down to the wire tonight. Lakewood is a really good football team.”