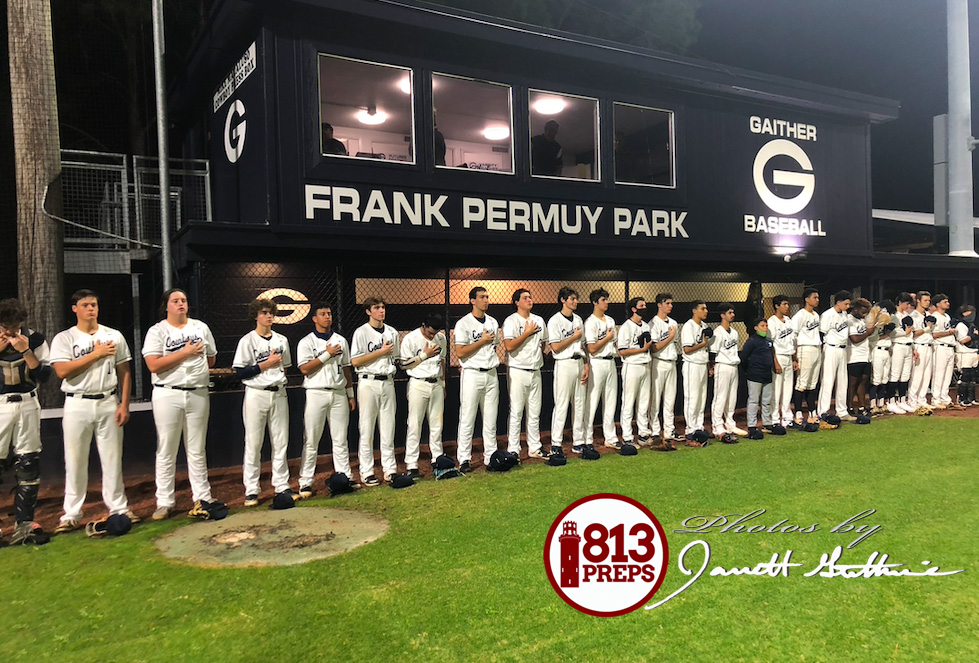 The 2021 Gaither Cowboys baseball team lines up for the National Anthem prior to their preseason opening game in the inaugural Frank Permuy Preseason Classic.

TAMPA – Expectations and excitement – that’s what the preseason is all about. But these are unique times and it has been clear across the high school baseball community here in Hillsborough County that along with the excitement of gearing up for a new season, there has also been some trepidation, some nerves and some unpredictability as we adapt to progressing into sports while in the midst of a global pandemic. There were many tough lessons our area student-athletes were forced to learn last season, how to grieve what was lost, sometimes on their own, being foremost in those lessons. But there were also bigger losses, significant losses, that we didn’t get to grieve in the best way possible – by being together. 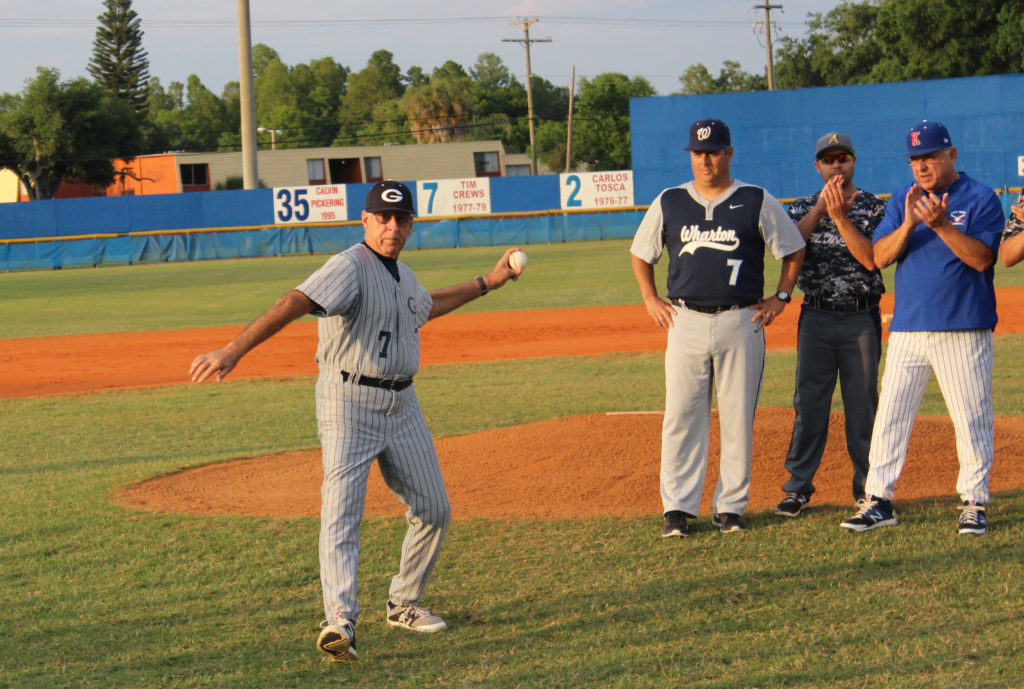 Frank Permuy, who died in April after a lengthy battle with cancer, was honored by his former team and school with the launching of the inaugural Frank Permuy Preseason Classic. Coach Permuy is pictured here tossing out a ceremonial first pitch at King High during his final season as the Cowboys coach in 2015. (813Preps file photo)

Tuesday night, at Gaither High, at the stadium named in his honor, a good-sized crowd assembled to remember Frank Permuy – longtime skipper of the Cowboys and lifelong champion of the youth game in our community, who died after a lengthy battle with brain cancer last April – at the inaugural Frank Permuy Preseason Classic. 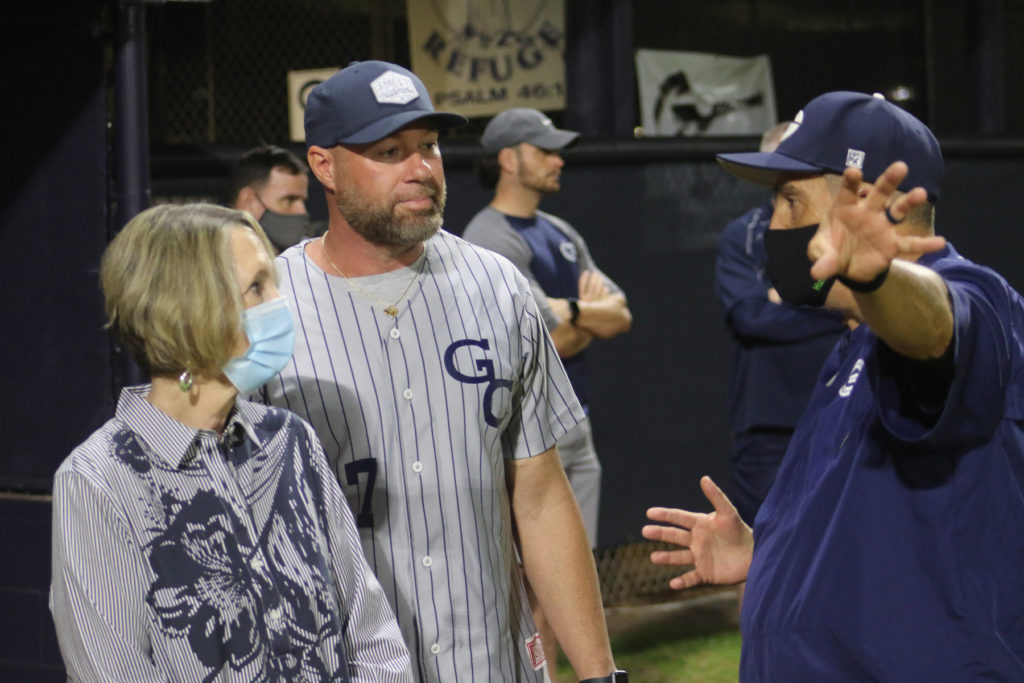 Nelson North catches up with Danae and Rick Permuy, prior to the pregame ceremony honoring the late Frank Permuy.

Yes, emotions were raw, tears were shed, but most importantly, and I think in a way Coach P would have insisted upon it being, there was baseball as four teams helmed by men Permuy coached, mentored or had lifelong friendships with, squared off.

The event planned and implemented by Gaither head coach Nelson North, and supported by his administration and scores of former Cowboys players was a wonderful celebration on what was always an impressive field, but has truly become one of the gems of Hillsborough County parks. With a brand-new scoreboard and signage, a freshly repainted pressbox, and rye grass greener than cash money, the preseason event that North said will be a shining reminder of his friend and former boss for years to come, took a huge first step on confident legs.

RELATED: “Tampa’s baseball legacy dims with the passing of Frank Permuy.” Read our story on the passing and legacy of the longtime Gaither head coach. 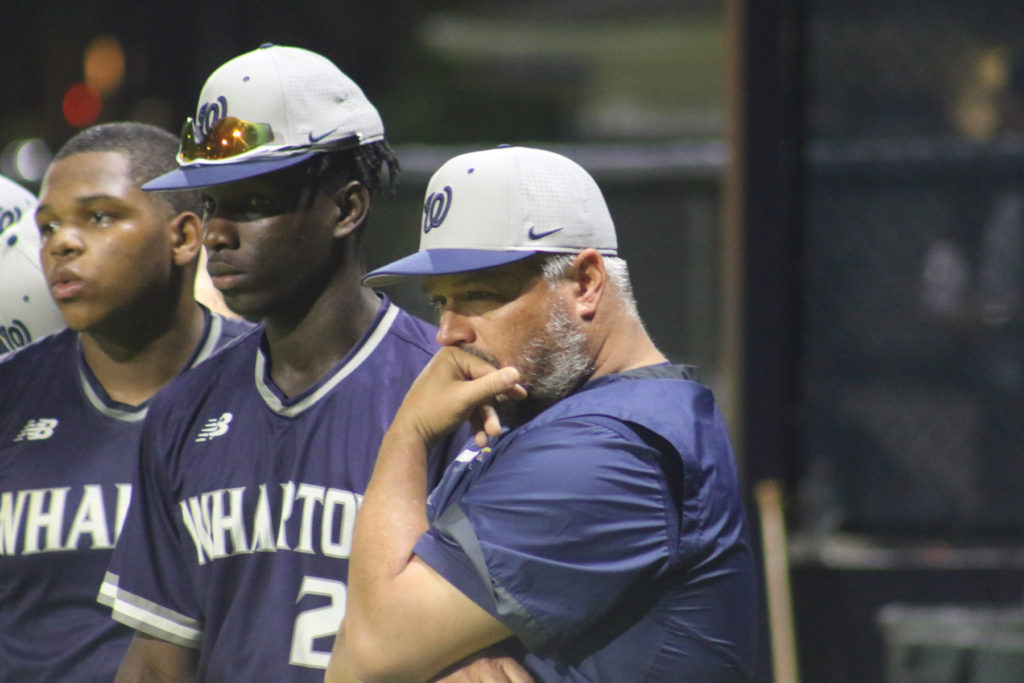 An emotional night for the event’s coaches with strong ties to the late Frank Permuy. Gaither alum, and former Cowboys assistant, Wharton skipped Scott Hoffman listens as Coach P is remembered in the pregame ceremony.

Opening the action Monday night, the voice of Cowboys baseball (and football) Mike Macaluso did an on-brand, remarkable job introducing the event prior to the meeting between Alonso and King. The Ravens coached by Landy Faedo, the team’s only head coach who cut his teeth as a Gaither assistant in the 1990s, and King, coached by Coach P’s decades-long friend Jim Macaluso, who though unable to coach do to an illness was in attendance in spirit, put on a good show. The latter game featured the host Cowboys squaring off against Wharton, which is coached by a former Gaither player Scott Hoffman. 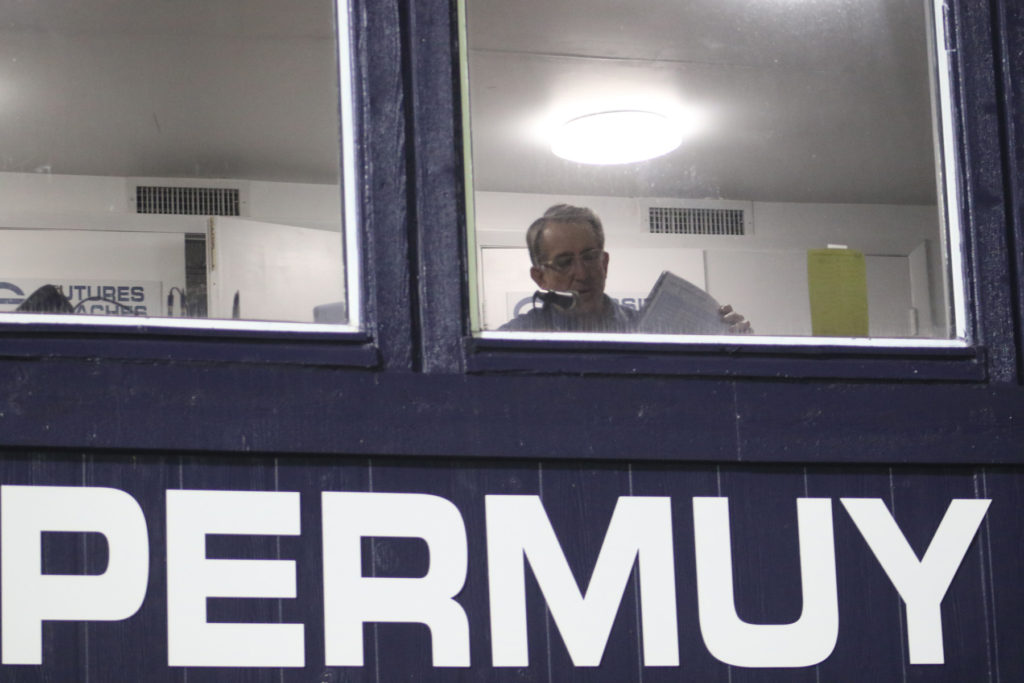 The second pregame again featured remembrances from the coaches involved, as well as more of Mike Macaluso’s voice booming around the stands.

With an emotional crack in his baritone, Macaluso began his reading in part, “but the real highlight of Frank Permuy’s accomplishments is the influence he has had on the innumerable players he coached through his 50-plus year coaching career. An influence that has been, and will continue to be felt in this community well into the future.” 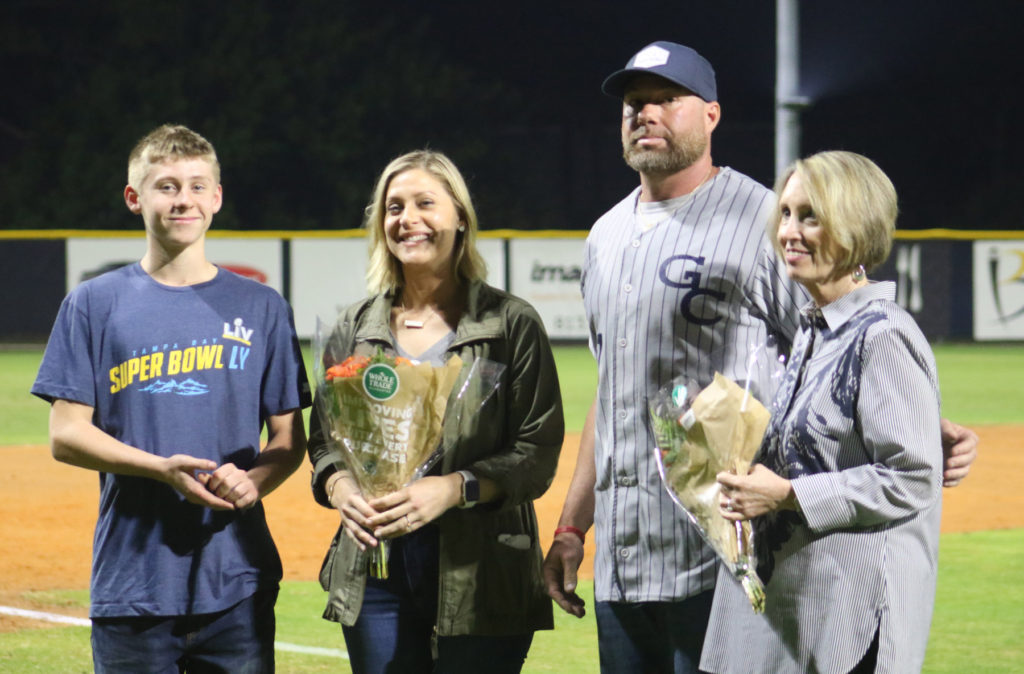 Coach Permuy’s widow, Danae (at right), along with son Rick Permuy and his wife, Melissa and son Brayden.

The pregame also featured on-field recognition of the Permuy family, including Coach P’s widow Danea, and his son Rick, who threw out the game’s first pitch, and his family. 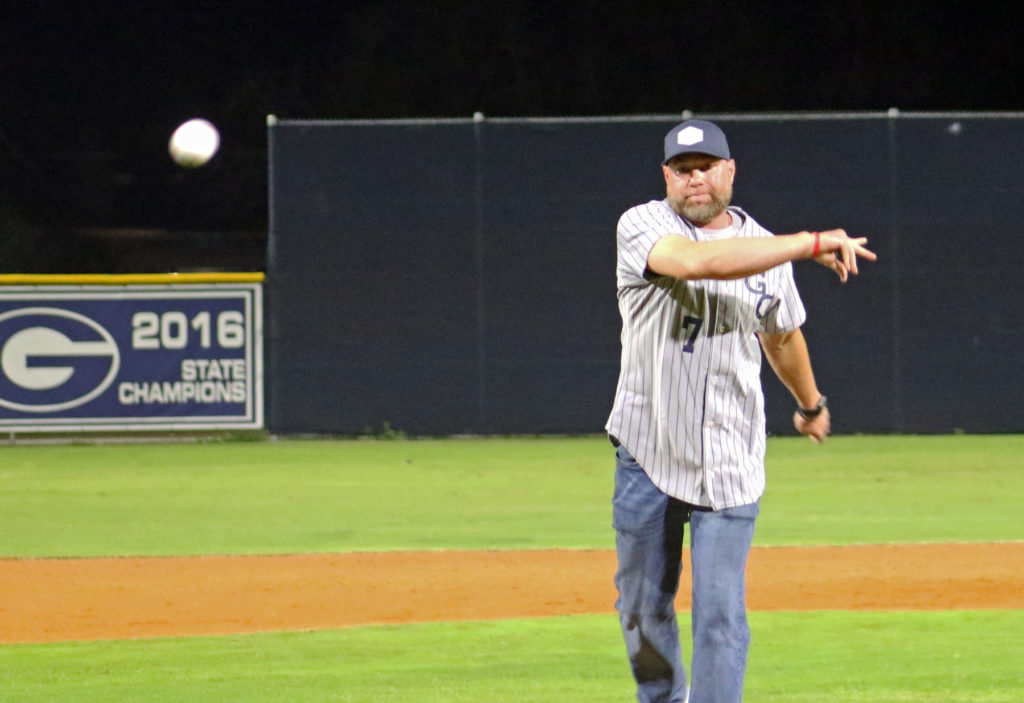 “To me it still feels like we lost him yesterday,” Rick said. “But the good memories that everyone always shares, the outpouring of kindness, that keeps him alive to me, makes it feel like he is still here, so events like tonight are almost therapeutic.

“I’m honored that everyone thought so highly of him, his impact, and now this can continue that legacy.”

North, who served as an assistant with Permuy before taking over the head coach position in 2016 and leading the Cowboys to a state championship, has never had a conversation with 813Preps where he fails to acknowledge Permuy’s enduring impact on him, and the legacy he dedicates himself to continuing in Coach P’s honor. 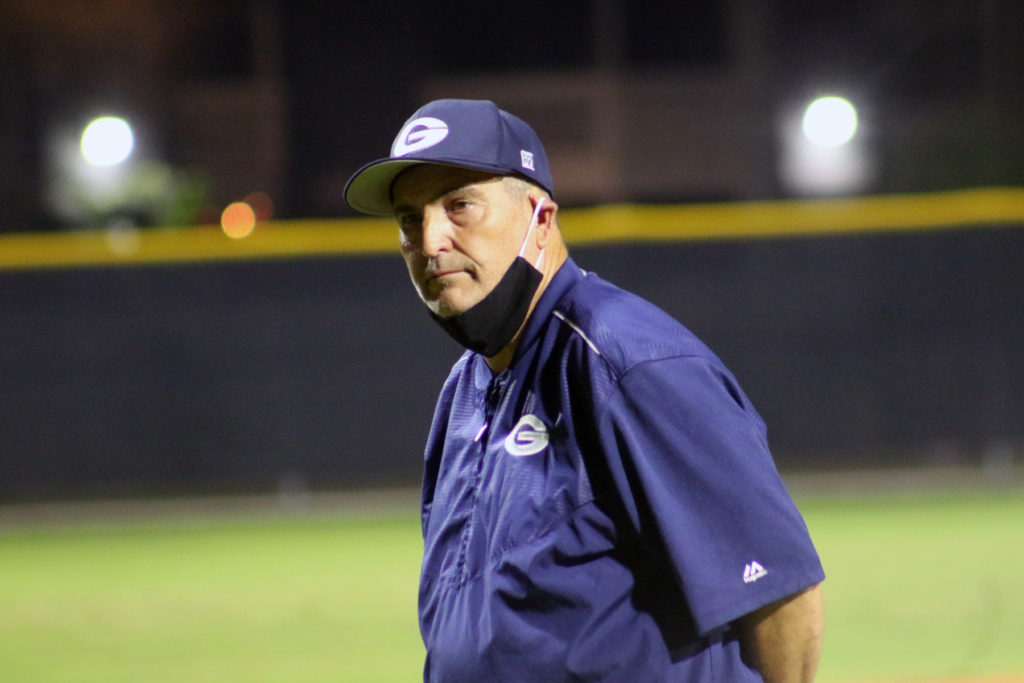 Gaither Coach Nelson North standing on the field opposite his team during the pregame ceremony honoring his friend and former boss, Frank Permuy.

“Going through planning an event is a learning experience for sure,” North said. “But making sure this was something special was everything. I come to this field every day and I think about (Permuy). I see him. I hear him, every day. I’m glad, but it is not easy. Frank Permuy is Gaither baseball, he built this, I inherited it.”

The moment that took so much effort arrived, and North said with a smile under sad eyes, “I know he’s proud of me.”

We know it too, Coach North.