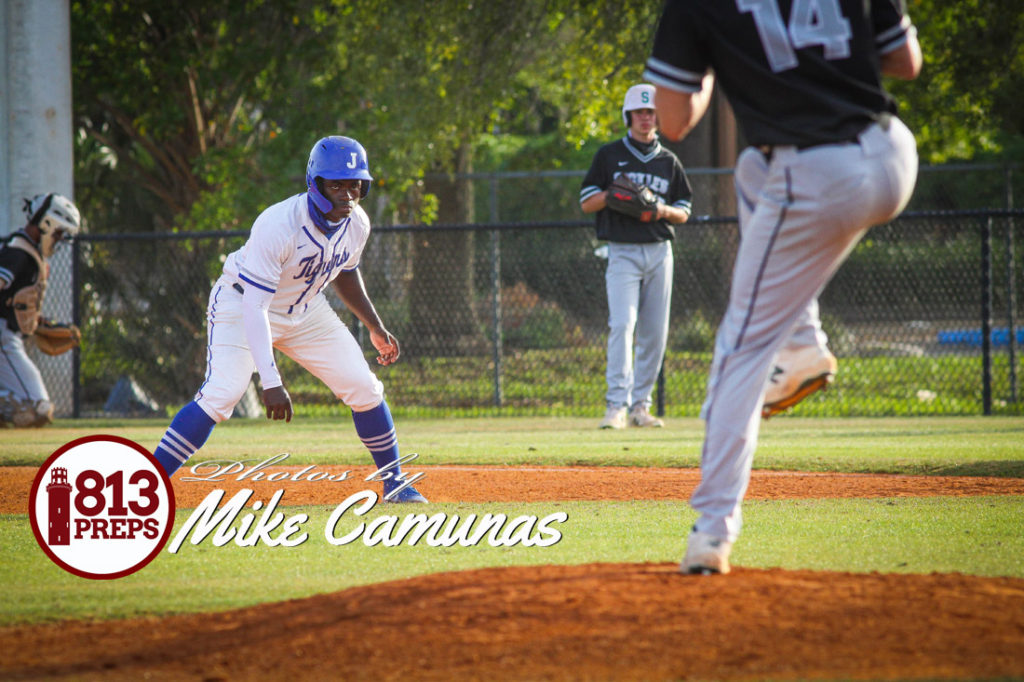 Jesuit senior outfielder B.J. Graham was 2-for-3 with a triple, a walk and a game-high four RBI in the Tigers’ 14-4 win over Sickles in Monday’s second day of the 2021 Saladino Tournament (photo by Mike Camunas).

TAMPA – If any team is built to play in a tournament that could sees a team play four games in five days, it’s Jesuit.

“We’re a deep team,” Tigers senior outfielder and Tulane commit B.J. Graham says confidently. “We got arms in the bullpen, we got bats that can hit — it’s a deep lineup, and we’re just now getting into form.”

The Tigers’ form certainly has been on display in the first two days of action in the 2021 Saladino Tournament. Following Monday’s 14-4 mercy-rule win over Sickles, Jesuit has easily won back-to-back games by a combined score of 21-6. 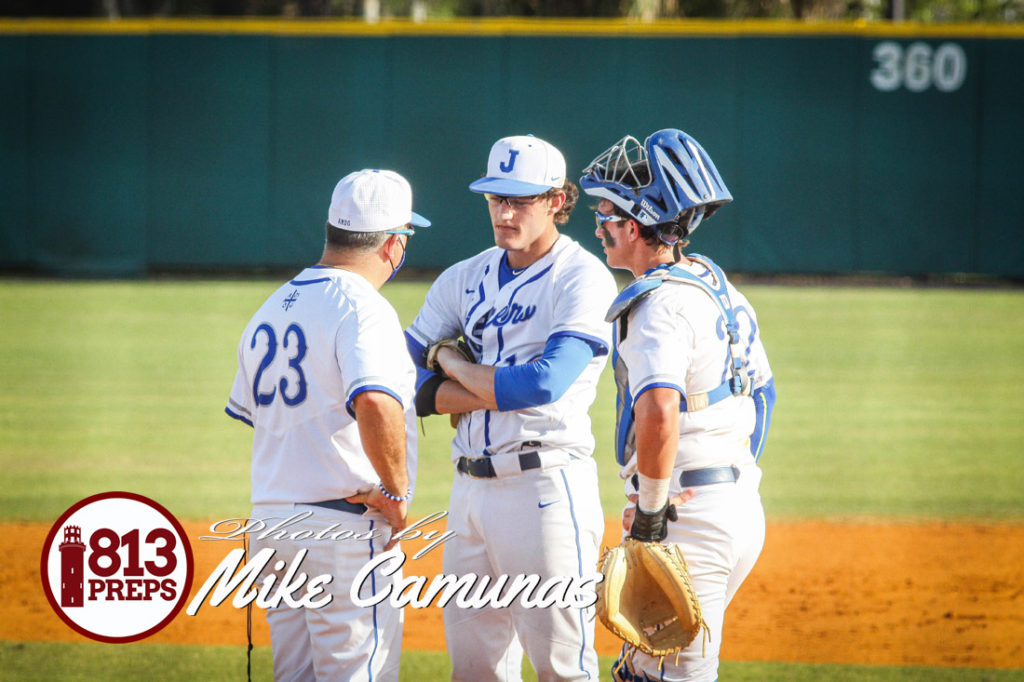 Jesuit coach Miguel Menendez speaks with pitcher Alden Sequi, who only pitched 1 2/3 innings into his start in the Tigers’ 14-4 win over Sickles in Monday’s second day of the 2021 Saladino Tournament, as catcher Cole Russo listens in (photo by Mike Camunas).

Graham led the way Monday, going 2-for-3 with a walk and a game-high four RBI, while coach Miguel Menendez used four pitchers — Alden Segui, Kris Sosnowski, Christian Hamiliton and Drew Hunt — that combined to allow just five hits and three earned runs and also allowed Dominic Castellano to stay out of the game for a start later this week.

“I think it was a total team win,” Graham said. “Drew came out and pitched well and we got hits when we needed them.”

Hunt pitched an inning, not allowing any hits and striking out one, while Sosnowski (who got the win) allowed just one hit and struck out one as well, in an early relief appearance after Segui had a slow start and threw 46 pitches over 1 2/3 innings and walked three. 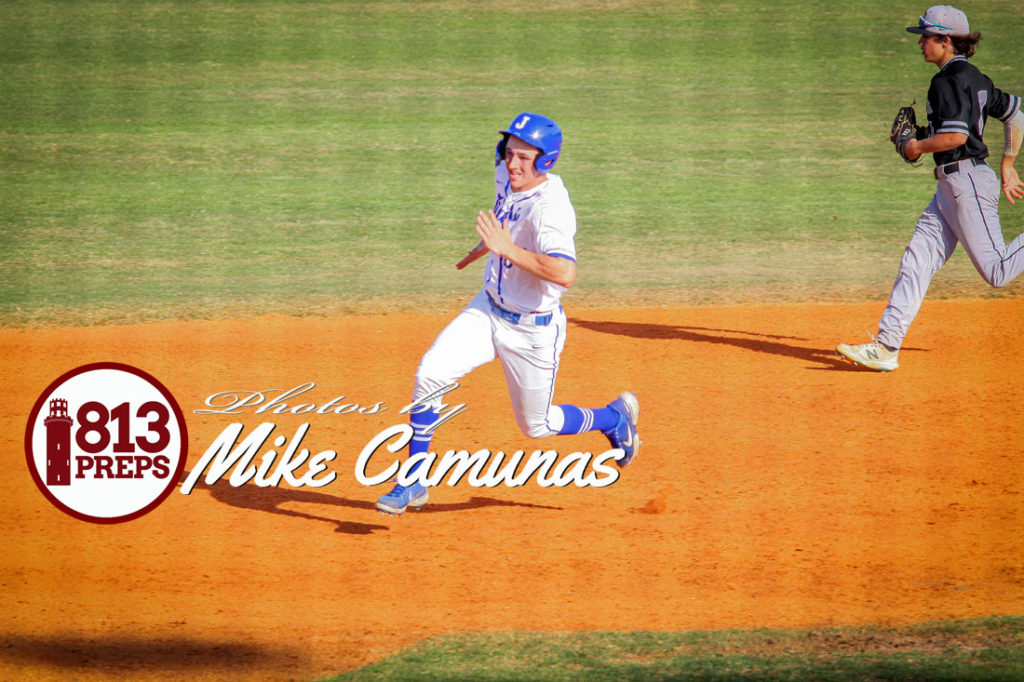 Jesuit sophomore Jake Kulikowski, who had an RBI, too, rounds third to score during the Tigers’ 14-4 win over Sickles in Monday’s second day of the 2021 Saladino Tournament (photo by Mike Camunas).

Kohl Robertson, who drove in two for the Gryphons, scored in the first on a wild pitch, but the Tigers bounced back with four runs in the second and then pushed the lead to 10-1 with a six-run fourth behind two RBI hits by Graham and then another by A.J. Nessler.

Bradke Lohry, who was also part of two double plays, including a 6-3 unassisted one, also drove in two RBI in the sixth, while a triple by Graham scored Lohry to end the game an inning earlier. 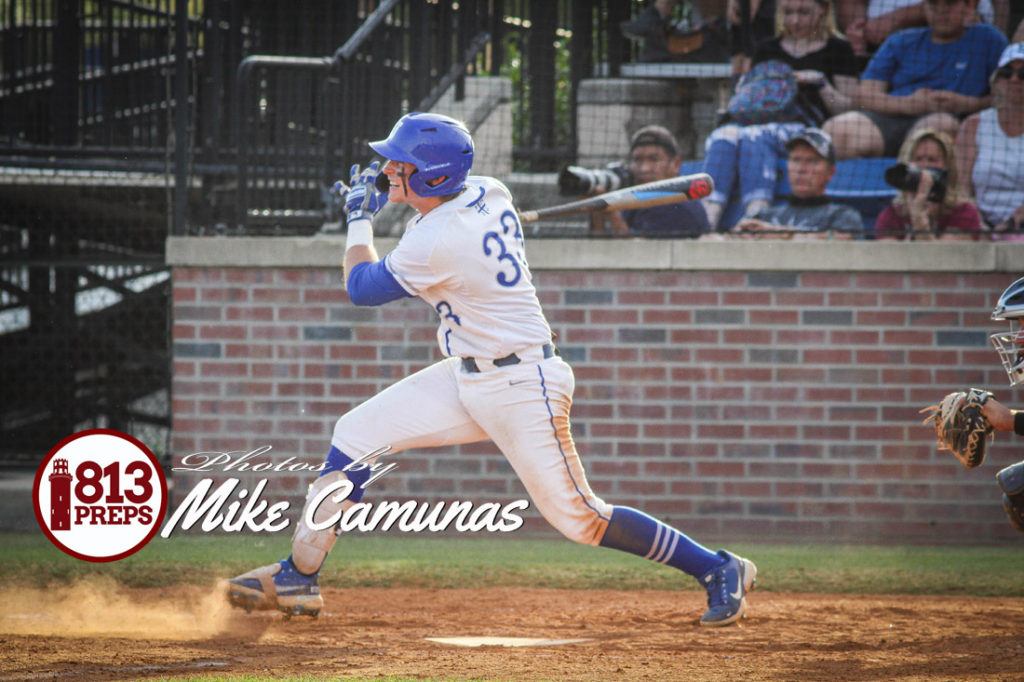 Senior Nick Rodriguez drove in a run and scored twice in the Tigers’ 14-4 win over Sickles in Monday’s second day of the 2021 Saladino Tournament (photo by Mike Camunas).

Now, Jesuit will host Wharton on Tuesday at 5 pm, after the Wildcats mercy-ruled their own Day 2 opponent: a 11-0 walk-off win over Alonso.

As for Graham, who is already a (2019) state champion, he is glad to be producing in this historic Hillsborough County Tournament, something he’s been looking forward to playing in his whole high-school career.

“My whole time here at Jesuit,” Graham adds, “all I’ve ever wanted to do is play in the Saladino Tournament. We’ve won States, we won Steinbrenner (Wood Bat Fall Classic) — I wanna win this.” 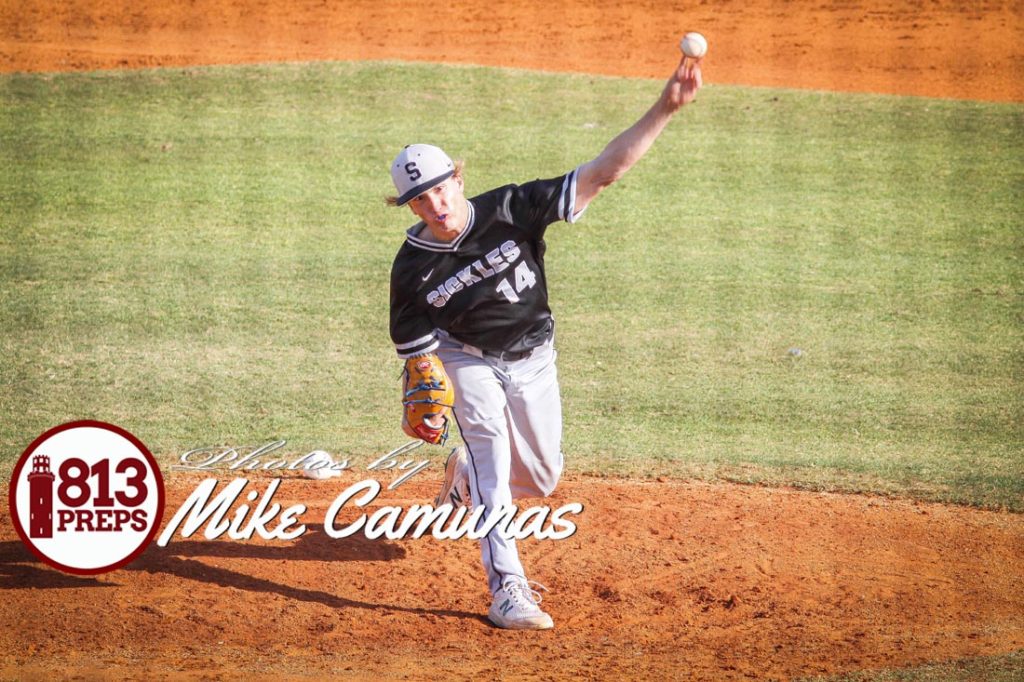 Sickles pitcher Holden Wade delivers a pitch during his start in the Gryphons 14-4 loss to Jesuit on Tuesday, as the senior southpaw gave up six earned runs and struck out five in Monday’s second day of the 2021 Saladino Tournament (photo by Mike Camunas).