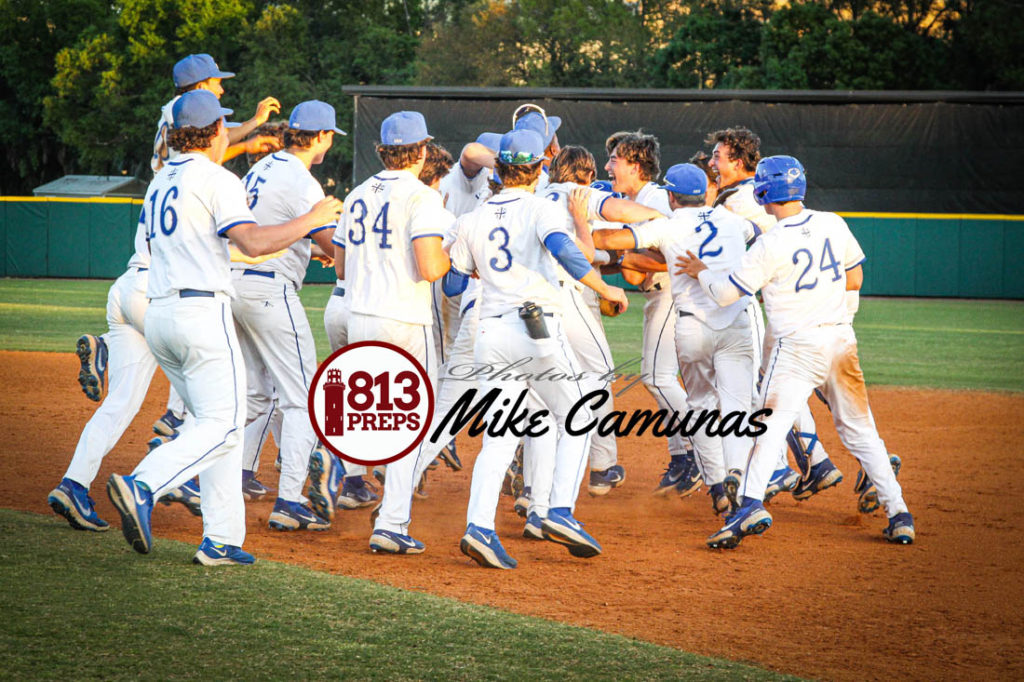 Jesuit mobs Tyler Corish after his walk-off RBI single to score Jake Kulikowski for the Tigers’ 6-5, walk-off win over Wharton to advance to the 40th Saladino Tournament Championship Game vs. Durant (photo by Mike Camunas).

TAMPA — Even when the Jesuit, as a whole, is not its best, parts of the rest seem to step up to the test.

During a game in which their pitching wasn’t the best, their defense seemed to get bested and even some of their best bats couldn’t connect, Jesuit still found a way to deliver an exciting, come-from-behind win in the Saladino Gold Division semifinal and down Wharton 6-5, in walk-off fashion and advance to the final, which the Tigers will host tonight vs. Durant at 8 p.m.

RELATED: Apparently, walk-offs were en vogue on Tuesday, as Austin Sewell singled in the game-winner for Jesuit’s Saladino Championship final opponent Durant as the Cougars defeated Strawberry Crest, 3-2. Click here to get the breakdown on this one. 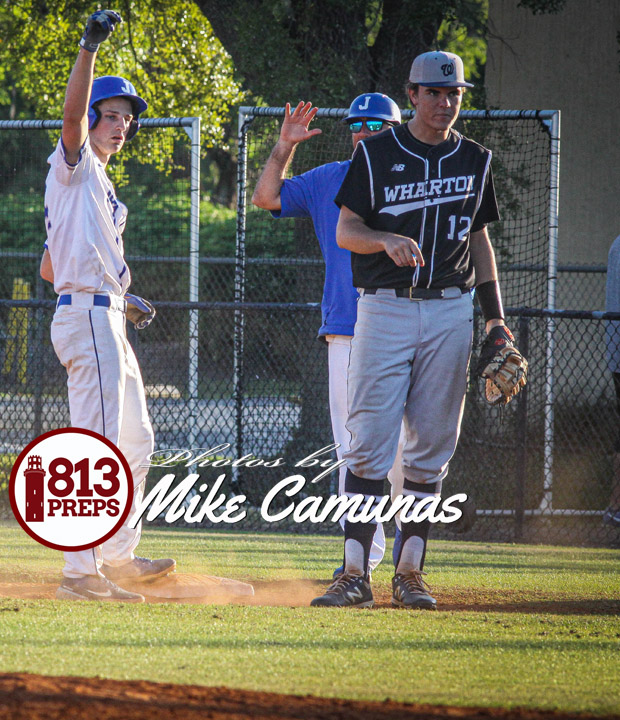 esuit’s Tyler Corish asks to keep being fed after the first of his two RBI singles that helped the Tigers’ to a walk-off 6-5 win over Wharton in the Saladino Semifinal on Tuesday afternoon (photo by Mike Camunas).

Tyler Corish would be the hero in the bottom of the seventh, sending home Jake Kulikowski with an RBI single off Wharton reliever Zach Ehrhard.

“We didn’t have the cleanest game I would’ve liked, but,” Jesuit coach Miguel Menendez said, “I told the guys I was happy with the way they responded to what happened to them.”

What happened was that the Tigers got down 3-1 early in the game thanks to runs driven in by Billy Eich, Dylan McDonald and Grant Parker. Yet, Jesuit responded in kind by chipping away that deficit before taking a 4-3 thanks to a wild pitch that allowed Jack Martinez to score and runs driven in by Nick Rodriguez and Wes Mendes.

“That’s a good team, so we knew we were facing a battle,” Menedez added, as his team had come in outscoring its first two opponents in this year’s Saladino 21-6.

But the Wildcats were able to rally in the fifth when Kulikowski misplayed a flyball in the sun, in which the error allowed Ehrhard and David Limbach to score and take a 5-4, albeit brief, lead.

“I was telling (my players),” Wharton coach Scott Hoffman said, “that these guys (on Jesuit) are kids just like you. They wake up, they go to classes and they come out to play just like you. It doesn’t matter that they put on (a Jesuit) jersey. They have to play, too, and you can play with them, which it seemed to finally click with them today.” 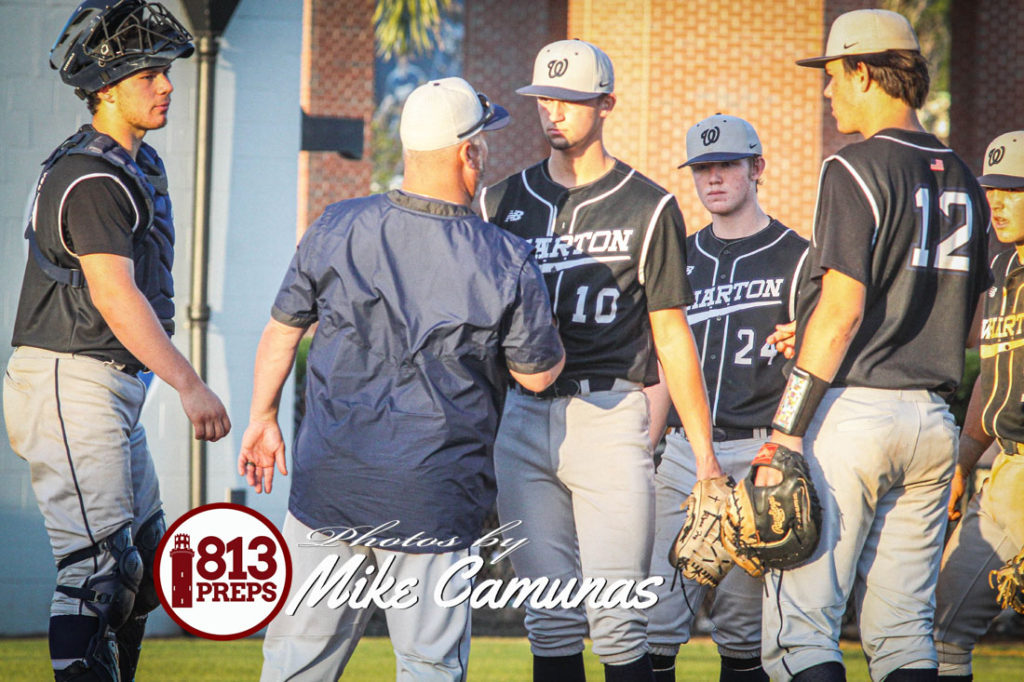 Indeed, the Wildcats were neck and neck with the Tigers, but it was Corish, as well, who tied the game thanks to an RBI single in the fifth to score none other than Kulikowski, too.

Four of those five runs would be charged against Wharton starter and Miami commit, Ryan Fry, who would throw 99 pitches over 5 1/3 innings, allow nine hits, three walks, but strike out six before giving way to Riley Glover for an inning. 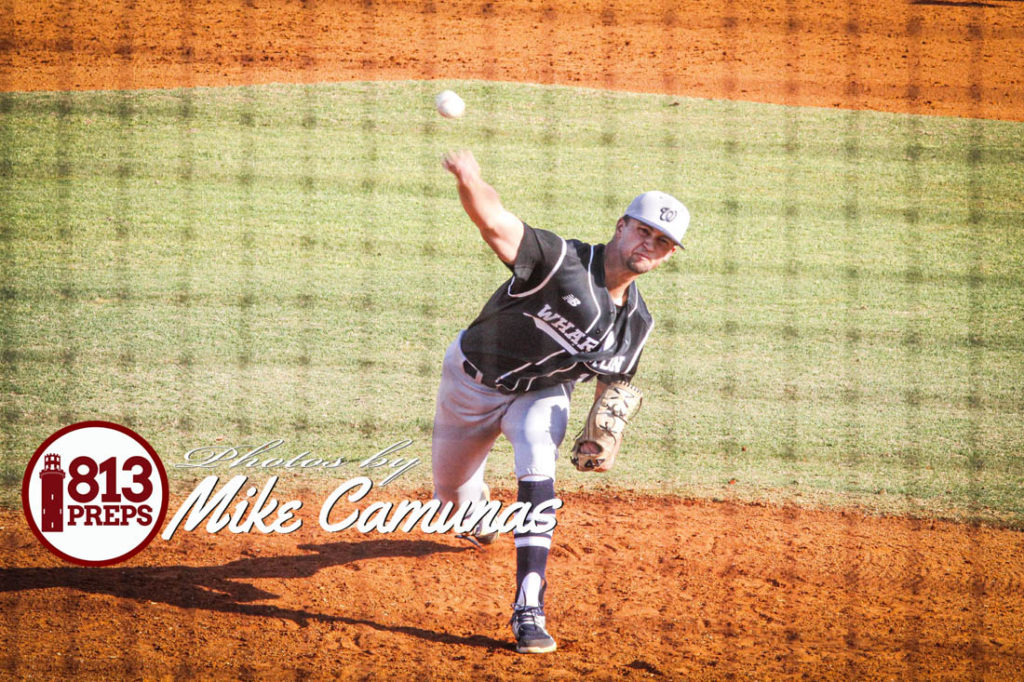 Wharton starter and Miami commit would throw 99 pitches over 5 1/3 innings, allow nine hits, three walks and strike out six in the Wildcats’ 6-5 loss to Jesuit in the Saladino Semifinal on Tuesday afternoon (photo by Mike Camunas).

Hoffman would turn to regular shortstop and Oklahoma State commit Zach Ehrhard to try and force extra innings in the bottom of the seventh with Kulikowski already on second and Corish up again. 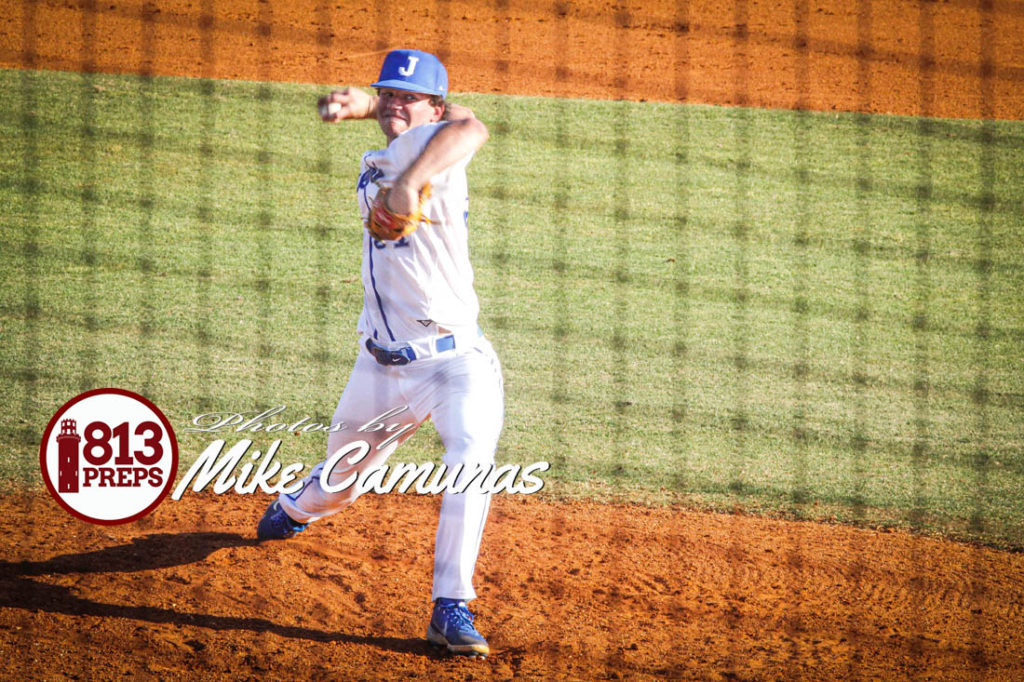 In back-to-back games and in eight innings pitched, Jesuit pitcher Kris Sosnowski has allowed no earned runs, struck out seven, gave up one walk and allowed just five hits to now boast a 0.42 ERA (photo by Mike Camunas).

It was Sosnowski, who picked up his second win in as many days, who came in and pitched 5 2/3 innings in relief. In back-to-back games, the senior has allowed no earned runs, struck out seven, gave up one walk and allowed just five hits, now boasting a 0.42 ERA over 17 innings pitched.

With the Tigers moving onto the Saladino Tournament Championship, they’re looking to nab its third overall title and second in five years — the Tigers last won it in 2017, while their opponent, Durant, is seeking its first after defeating Strawberry Crest in walk-off fashion, as well.

“I was hoping we’d get there and we did,” Corish said. “It’s nice because who from around here doesn’t want to win this tournament?”

Postgame interview with this #Saladino2021 semifinal hero, @JesuitBaseball’s @TylerCorish, who had the game-tying AND WALKOFF RBI singles to propel the Tigers to the Tournament Championship vs @Baseball_Durant @813Preps #hsbaseball pic.twitter.com/PgOxlmDbEb

“We obviously want to finish the job (tonight), but we’re excited,” he added. “We’re not always in it because (our) Spring Break (is different than the public schools), but I have great respect for Mr. Tony and Ms. Bertha, and it will be a special one to come out and win again.”

Postgame interview with @JesuitBaseball coach Miguel Menendez, who looks to guide his Tigers to their third overall Saladino title and second in five years when they face @Baseball_Durant @813Preps #Saladino2021 #hsbaseball pic.twitter.com/K5rpbcnOgr 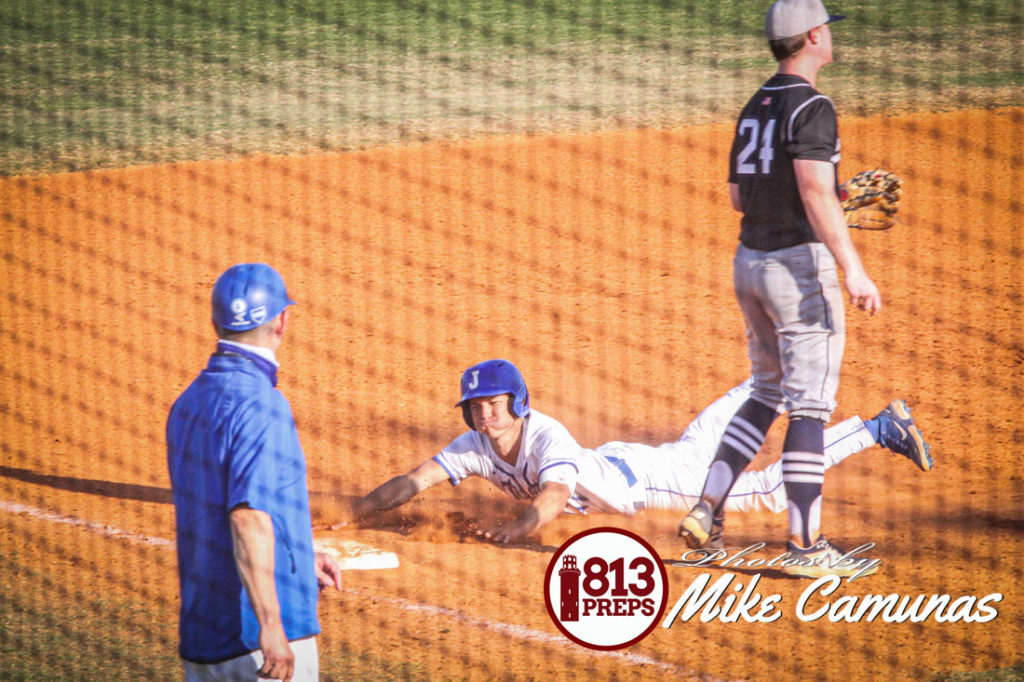 esuit’s Jack Martinez slides into third during the Tigers’ 6-5 walk-off win over Wharton in the Saladino Semifinal on Tuesday afternoon. 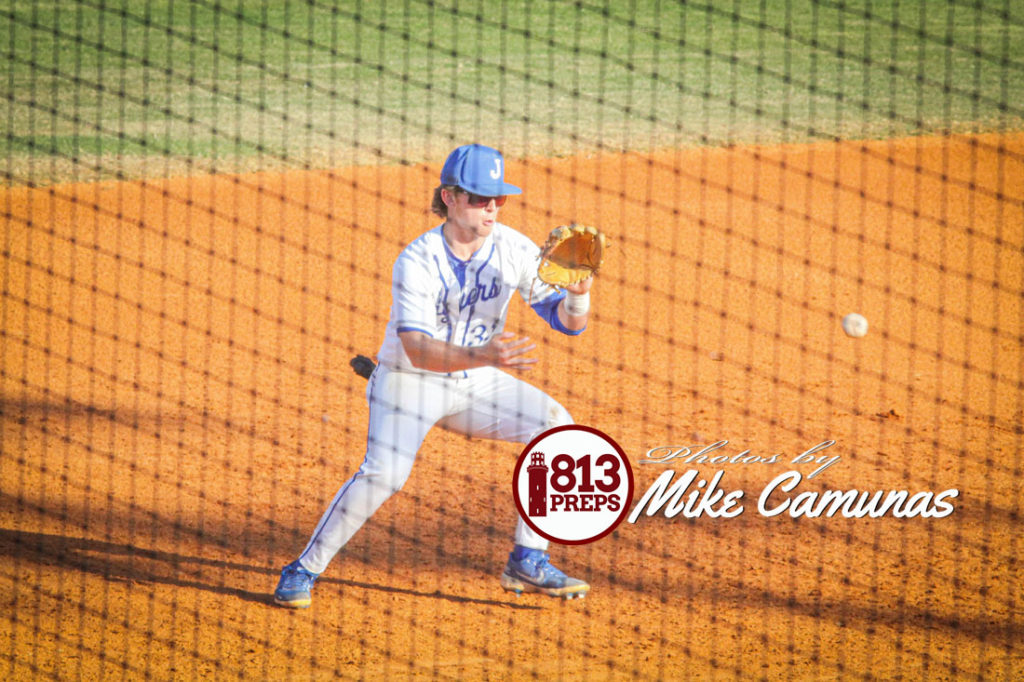 esuit third baseman Nick Rodriguez, who also drove in two in the Tigers’ 6-5 walk-off win over Wharton in the Saladino Semifinal, makes a play on Tuesday afternoon.