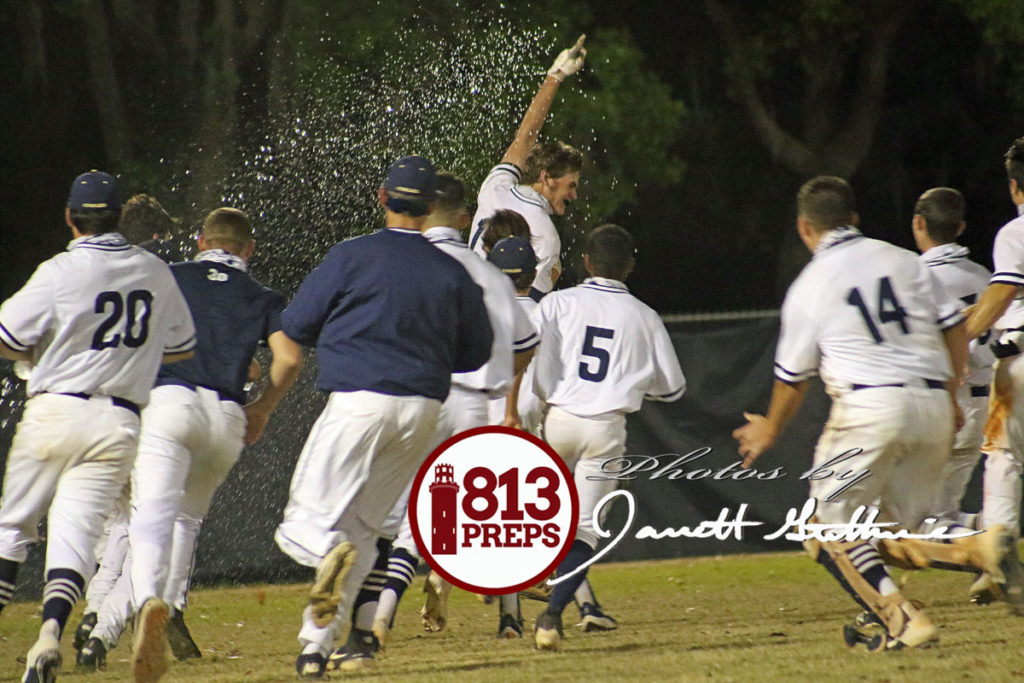 Durant senior Austin Sewell points skyward as his team finally chases him down in left field after he walked off the Cougars Saladino Gold Division semifinal win, 3-2.

“I was trying to do my inner-Brett Phillips there, after he walked off Game 4,” Sewell said. “Do a little airplane, it was fun. I just wanted to enjoy the moment.”

The celebration was well-earned as the Cougars senior ended Tuesday’ Saladino Tournament Gold Division semifinal game against Strawberry Crest, slapping a walk-off single the opposite way into right to give his team a 3-2 victory and setup tonight’s tourney championship on the road against Jesuit.
The meeting of the two East-Hillsborough powers was, as expected, a battle throughout.

“Every time we play Crest it’s a dogfight and always comes down to the last hitter,” Sewell said. “We were ready for it and knew we would have to fight the whole way. Luckily, we put together some good at-bats that last inning and won it.” 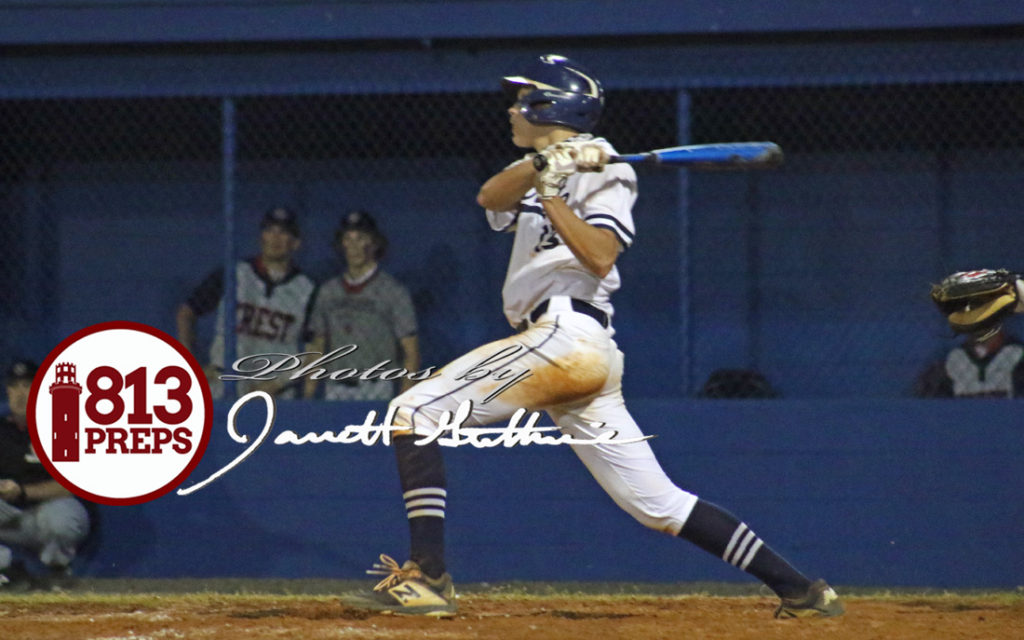 Sewell eyeballs his slapped hit into right field, driving in Thomas Allen for the deciding run in the seventh. Sewell was 3-for-3 with an RBI sac fly in the victory.

RELATED: Walk-offs were the name of the game on Tuesday as Durant’s championship final opponent, Jesuit, got a game-winning hit off the bat of Tyler Corish to defeat Wharton. Click here to read all about that game from Mike Camunas.

Those last at-bats featuring the top of the Cougars lineup saw a walk to Thomas Allen to start it, a bruise-inducing hit-by-pitch to a squared for a bunt Luke Scolaro, and a hustle play on a bunt from Dean Hotz to load the bases for Sewell, who came through with the walk-off – the third-straight for Durant in this rivalry dating back to 2019.

But Sewell was not the only hero of the night for Durant (9-2). Senior Zander Fisk had a huge night atop his home mound, pitching a complete-game and striking out seven to earn the win.

Fisk allowed a first-inning run, and a leadoff walk in the fifth came around on him. However, it was his performance in the sixth where Crest got a leadoff walk, a hit batter and an Alex Mussenden single to load the bases, before Fisk shut the door with a pair of strikeouts, bookending a fly ball out to keep the Chargers from scoring. He punctuated the final strike-three looking call with a huge yell and fist pump off the mound toward his dugout. 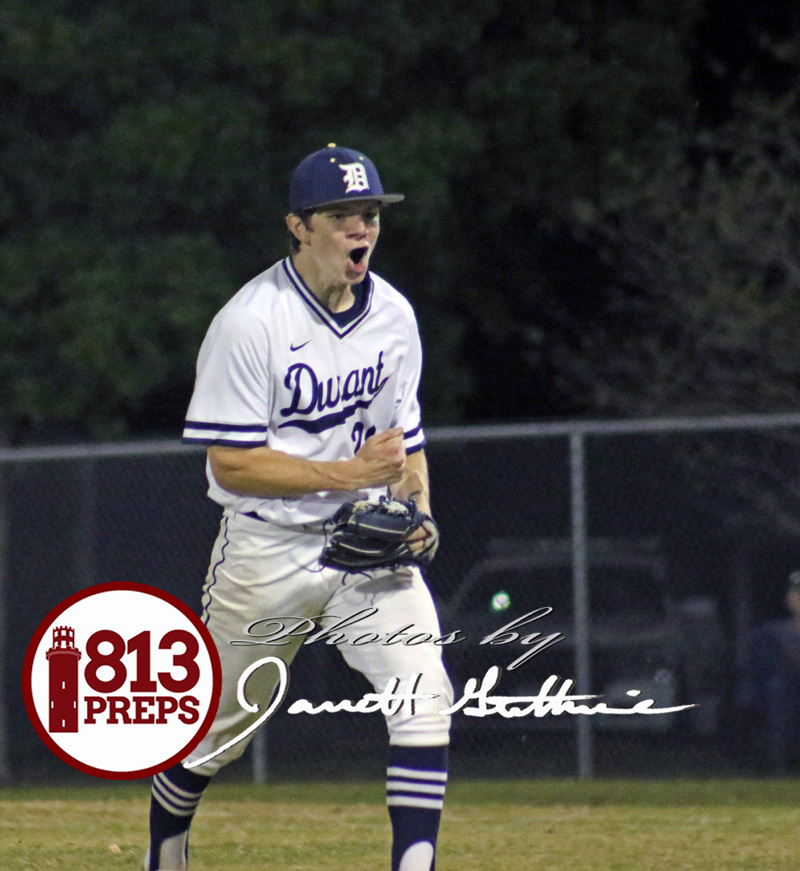 Durant’s Zander Fisk bounds off the mound after leaving the bases loaded in the sixth with a strikeout.

“I can’t even say enough good things about him,” Sewell said of Fisk’s performance on the mound. “I’m super-proud of him. He went out there and pitched tonight – that sixth inning where he got those three outs – that was it. We had the momentum from there.”

Fisk said the emotions of the moment hit him and he felt that it sparked the coming events for his team.

“That was a big battle with those last three hitters,” Fisk said. “I had to let out a ton of emotion there, because after that I knew we were going to win this game.” 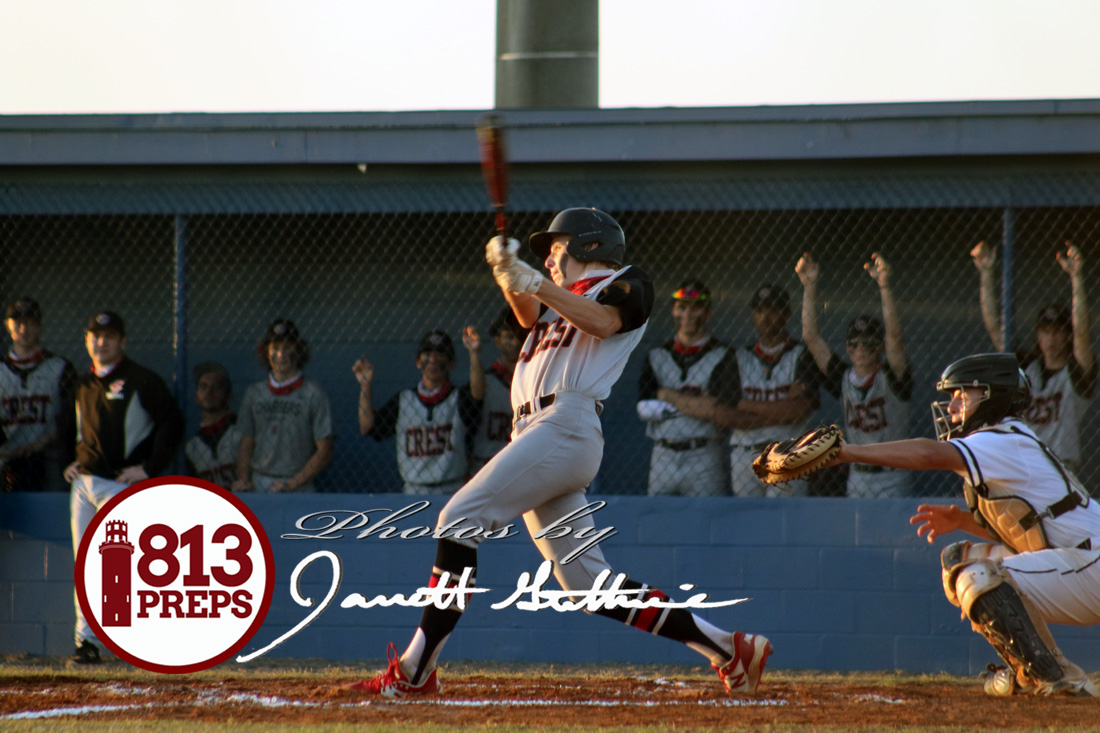 Durant answered in the home-half with two as the top of the lineup started the game with its offense firing, and Sewell drove in the first with an RBI sac fly, before Javy Quintana singled in another. 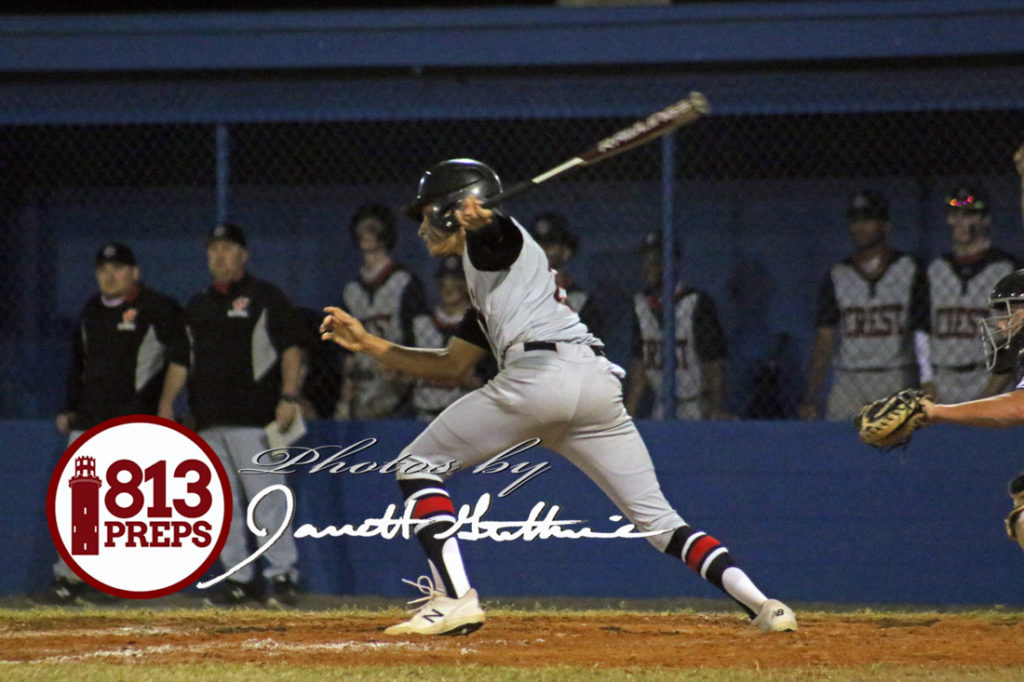 Strawberry Crest’s Cristian Bolt slapped a groundball up the middle to plate a run in the fifth.

The Chargers tied the game in the fifth when Cristian Bolt’s ground ball up-the middle allowed speed-up runner Jace Raburn to score. Crest turned to another sophomore, Zach Redner to take over on the mound after a leadoff single from Sewell started the sixth. Redner left them loaded in the sixth, striking out two before taking the loss in the final inning.

“Our pitchers did a phenomenal job tonight,” Crest coach Eric Beattie said. “We made a lot of mistakes in that first inning, but Luke battled the entire game, and Zach came in for a very stressful situation and stayed composed. Our pitchers gave us a chance to win.” 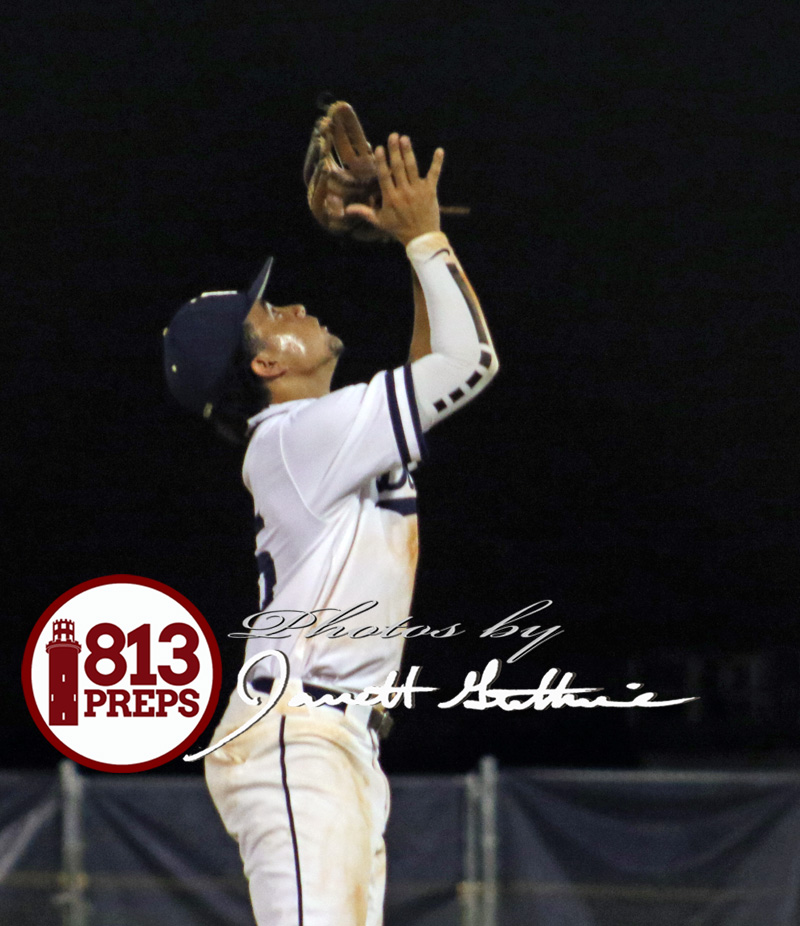 Cougars 3B Javy Quintana settles under a pop fly in the fourth. The senior also drove in a run with a first inning single.

Another pivotal play that swung in the Cougars favor came in the top of the seventh when Bolt had singled, moved to second on a wild pitch, but was thrown out by catcher Carlos Morales trying to take third on a ball in the dirt, with a nice tag applied by the third baseman Quintana.

“It was a dirt-ball read,” Beattie said. “It was an aggressive mistake, he was going hard and it didn’t go our way this time.”

After the win, Fisk said as much as the sixth inning threat and his response fired him up, when he looked at the hitters stepping to the plate in the seventh, he felt pretty good about the outcome.

“I told one of my teammates in the dugout, ‘Sewell is going to be up this inning,’” Fisk said, “’and I know he is going to put it away.’” 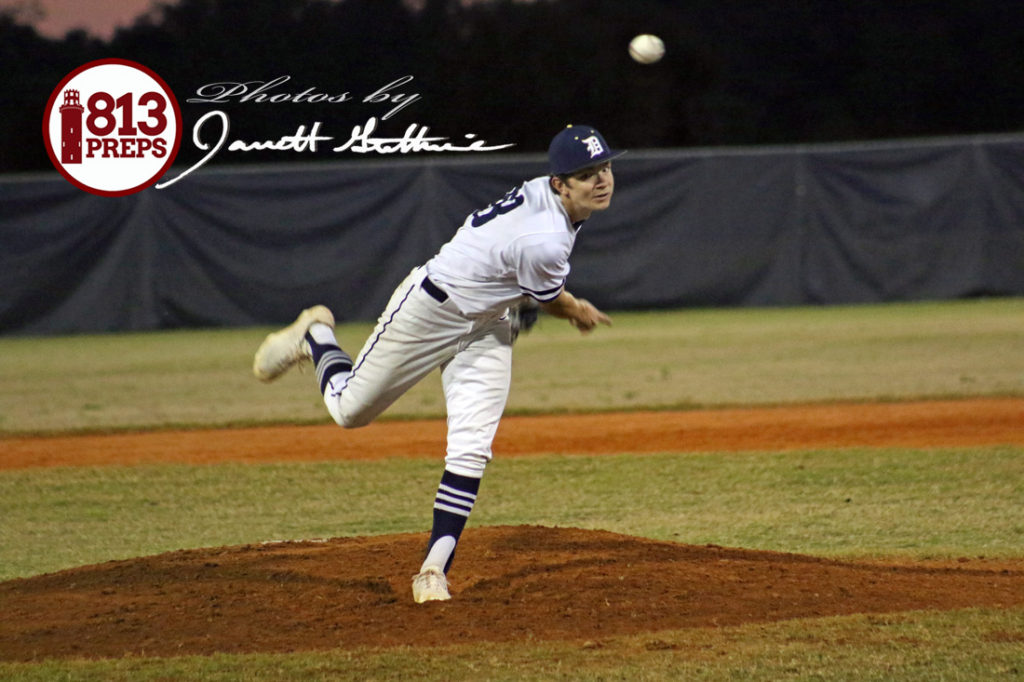 Durant’s Zander Fisk struck out seven in his complete-game win against Strawberry Crest.