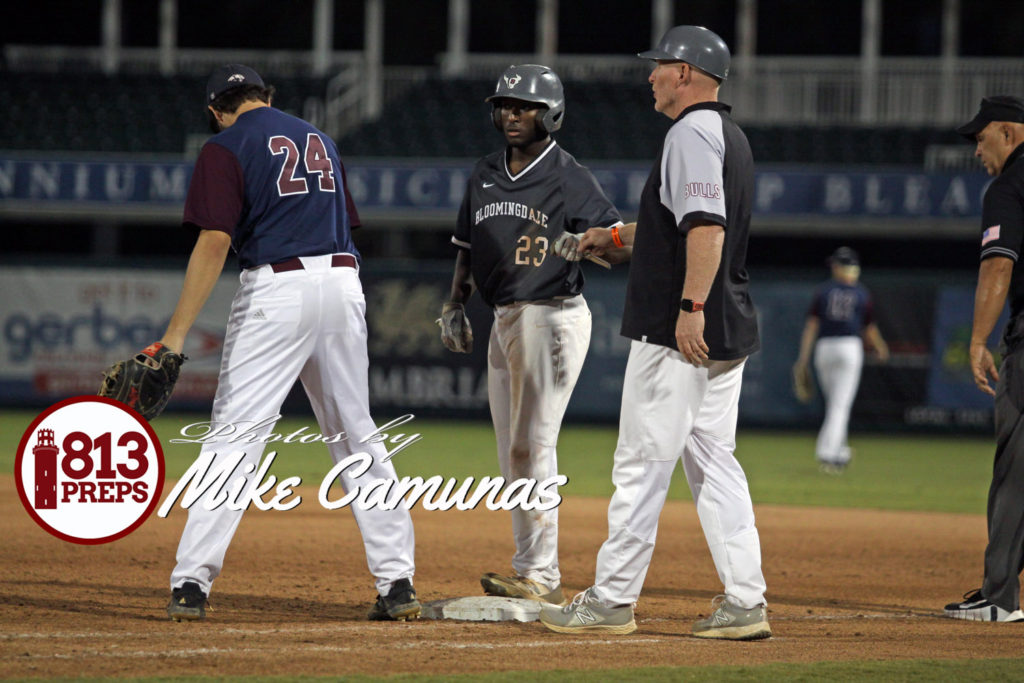 FORT MYERS – Grandiose speeches are nice, but sometimes short and sweet is better. Minutes after the Bloomingdale Bulls claimed its FHSAA Class 6A baseball state title (click here to see how the Bulls won), dogpiled on the field, accepted their gold medals and took a knee in the outfield grass of Hammond Stadium in Fort Myers, longtime assistant coach Jim Masson addressed the team with a brief but simple message.

“I’ve been a part of this program for [20] years,” he said. His voice cracking just slightly, he added, “thank you. Thank you.”

Masson, a math teacher who previously coached at Armwood before moving to Bloomingdale in 2002, has served as a Bulls assistant for four state final four runs, manned the first base coach’s for years and finally, deservedly is a state champion coach.

Bloomingdale assistant coach Jim Masson has been with the team for 23 years. His message for the team, simply put : “thank you, thank you.” pic.twitter.com/uCMO7KGVlf

In his first season with the Bulls, serving under coach KB Scull, Bloomingdale reached the final four and did it again two years later in 2004.

“My first year we made it here [to the state semifinals] when it was at Legends [now Steinbrenner Field], and we made it back in 2004 and I thought, ‘wow, this is what you do around here I guess,’” Masson said, holding his hand on the state title gold medal around his neck. “It’s a lot harder to get here than those first two years made it seem. It took us 10 years to get back, and another seven years to get this [medal].”

For head coach Kris Wilken, who after 14 years as the Bulls head coach led Bloomingdale to Saturday’s 5-1, state championship victory against Port Orange Fleming Island, the importance of dependable coaching partners is invaluable.

“Masson has been my go to-guy for so many different things for the past 14 years,” Wilken said, “and I couldn’t imagine coaching without him.”

Though Masson was beaming with his championship medal and pleased with the title trophy, he stressed all season the most important thing to him was what it means for the players he coaches. That message, and the emotion behind his simple, postgame “thank you” was not lost on the team. 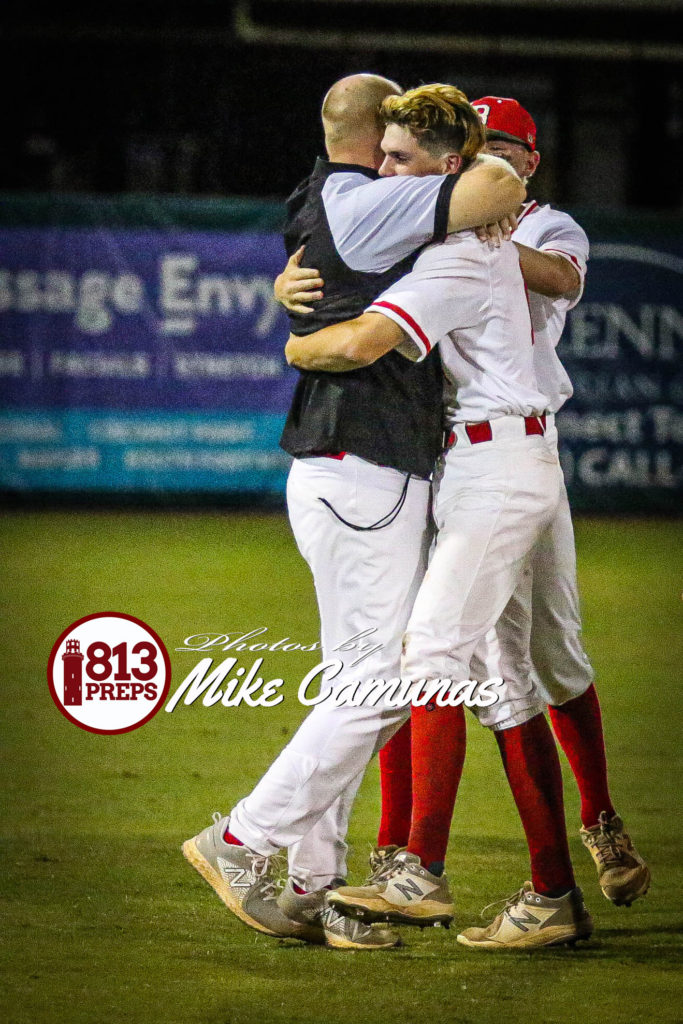 “It means the world to me,” said junior pitcher Chase Chappell, who finished off both the final and semifinal with saves, “because I know how genuine that statement was, and how much he loves each and every one of us.”

Wilken said that love for his players is something that draws in new Bulls players and students every year.

“Jim’s relationship with the players is very special,” Wilken said. “He cares about them as people first and ball players second, so they gravitate to him because of that.”

The hardware is nice, but Masson made sure to let his players know what he wanted most this season. 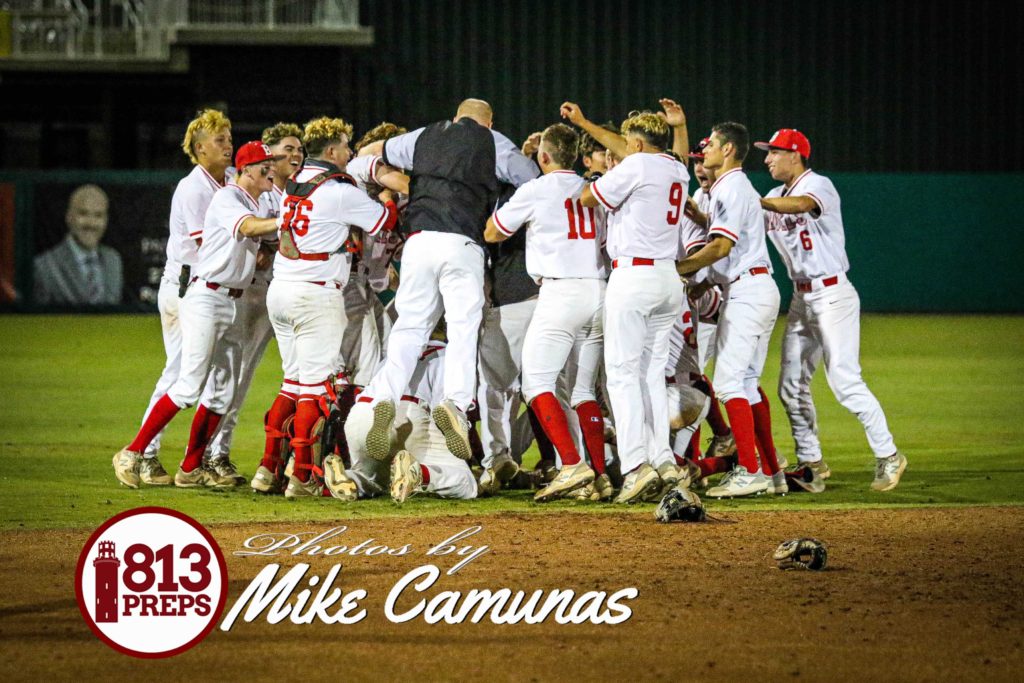 “All I wanted to do is jump on that dogpile after the last game of the season,” Masson said. “And man, I got to do that.”

Fellow assistant coach Frank Lombard has spent years coaching at the high school level as well, first coaching with Wilken at Brandon under then-Eagles coach Matt Stallbaumer, before moving to Bloomingdale under Scull and remaining for Wilken’s entire tenure. Lombard is another “go-to guy” for Wilken, serving as team statistician. Tim Malloy started with the JV team, and has had two runs assisting at the varsity level, most recently returning in the 2019 season. Josh Wilken, Kris’ brother joined the staff in 2017, and though he did spend some time this season traveling to watch his son (and 2019 813Preps Hitter of the Year) Brock Wilken clobber a Wake Forest single-season record 17 home runs this spring as a freshman, he was in uniform for the state series action. While alums Austin (class of 2012) and Cody Wilson (c/o 2017) also served as assistants, with the added bonus of younger brother, sophomore Trey Wilson having an impact on the mound for the 2021 team.

813Preps salutes the entire Bulls coaching staff for the 6A State Championship for the countless hours of dedicated work to their players and school.