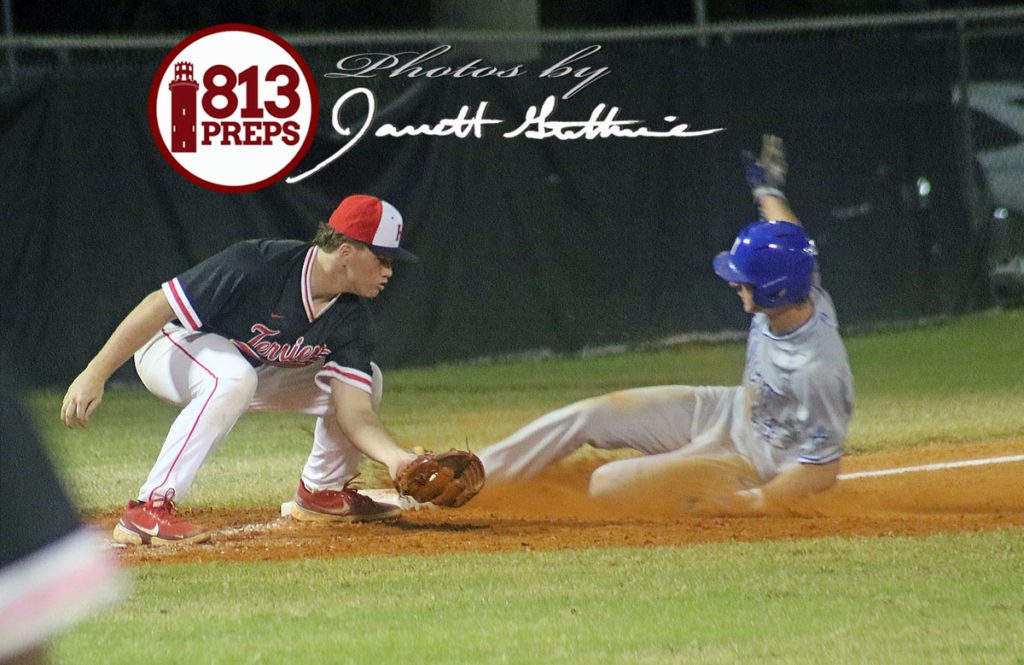 Jesuit’s Tyler Corish slides into our No. 1 ranked Tigers notes after going 5-for-5 last week.

The Tigers upped the win-streak to nine games, handling business against Bartow (winning 13-4), and Sickles (with and 8-2 victory), as Jesuit continues to lockdown the No. 1 spot for the seventh-straight time this season (including preseason). Senior BJ Graham and junior AJ Nessler drove in nine of Jesuit’s 21 runs last week, while Tyler Corish was 5-for-5, with a double, four runs and two RBI. The Tigers host Palm Harbor and wrap-up the Largo Tournament, playing the tournament title game, rescheduled from week 1 of the season on Wednesday. [Last Week: No. 1]
This week: Tues, 3/30 v Palm Harbor; Wed, 3/31 v Cardinal Mooney (makeup final of Largo Tournament at Largo) 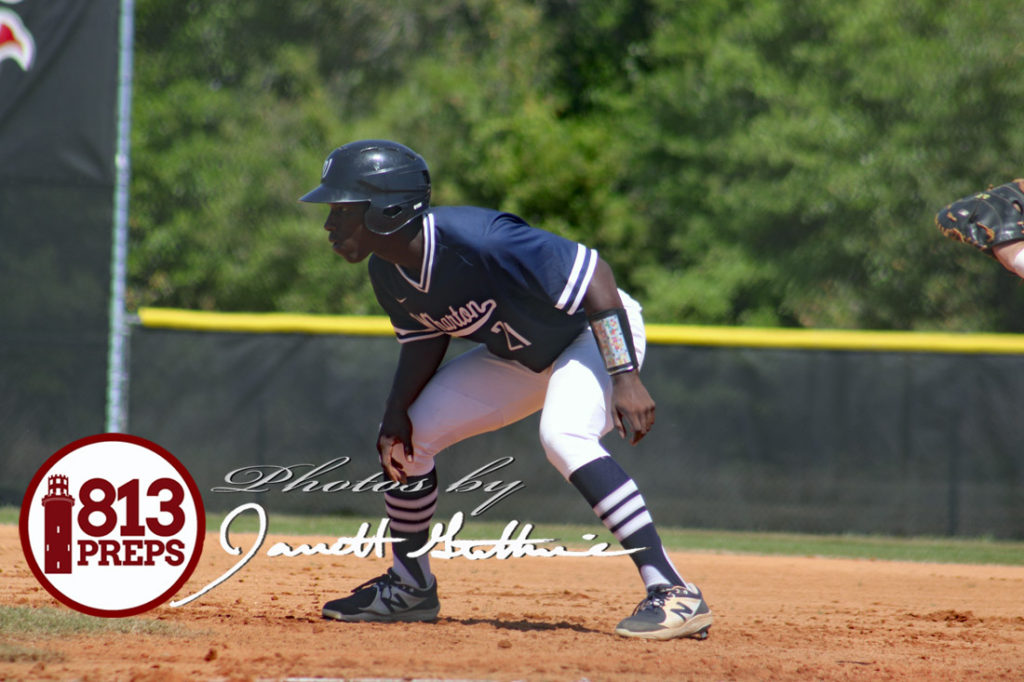 Wildcats senior Tyson Sutton’s first high school home run highlighted a mercy-rule win over Riverview last Tuesday, along with 11 K’s from Jackson Perkins on the mound, before Wharton avenged an early-season district loss to Sickles, shutting out the Gryphons at home with a late, three-run innings sparked by a Quentin Meadows two-run single (click here to read about this game). [LW: No. 3]
This week: Tues, 3/30 vs Steinbrenner; Thurs, 4/1 v Sumner 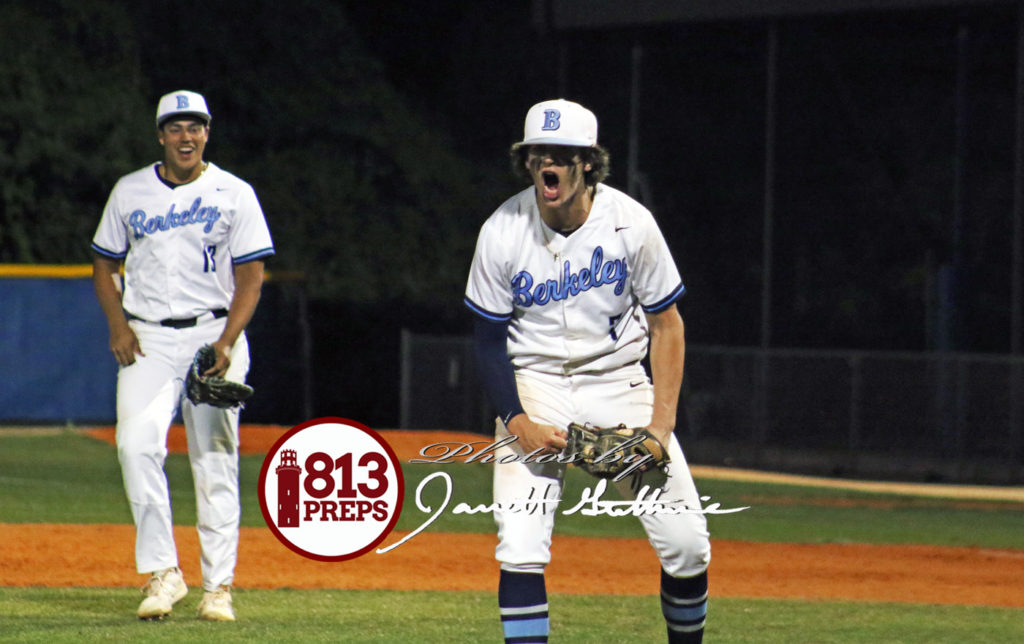 Senior Andrew DiMisa lets out a yell after finishing off the game against Calvary Christian, while 1B James Hankerson is all-smiles behind him.

Sophomore James Hankerson went 3-for-5, with a double and home run in a win over Montverde Academy last week for the Buccaneers, and then drove in what would prove the deciding run in Friday’s district win against Calvary Christian (click here to read our game story). Senior Andrew DiMisa drove in three and scored twice in the stretch, while also picking up the save versus the Warriors. [LW: No. 4]
This week: Tues, 3/30 v Strong Rock Christian (Ga.); Thurs, 4/1 at Tampa Prep

The Cougars took care of work last week defeating Brandon and Robinson. Against the Eagles (a game you can get all the details on by clicking here), Sean Hermann continued his domination on the mound posting his fourth double-digit strikeout game in as many starts this season. Against the Knights, senior Dean Hotz and sophomore Dylan LaPointe were a combined 6-for-9, with four RBI and two runs scored. [LW: No. 5]
This week: Tues, 3/30 at Crest; Thurs, 4/1 at Lennard

Aside from losses to our No. 1 & 2-ranked teams on this list, the Terriers have taken down every other team faced this season. Hillsborough continued that trend claiming one-run wins against Gather and Jefferson (district), and a decisive win over Blake. Freshman Ryan Arroyo put his stamp on the week’s three wins, going 6-for-9 and scoring six times in the stretch. [LW: No. 6]
This week: Tues, 3/30 at Jefferson; Thurs, 4/1 at Steinbrenner; Sat, 4/3 at Lennard 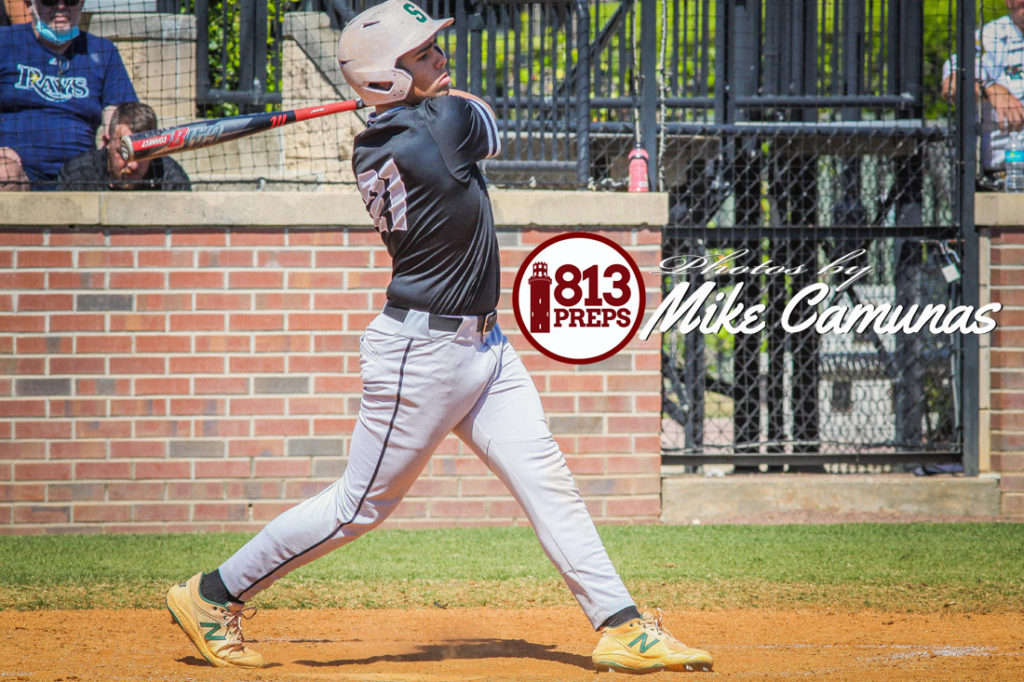 The Gryphons take a bit of a tumble this week, dropping four spots after losing to Wharton and Jesuit, but did the job against Tampa Bay Tech to start the week. Seniors Adrian Gutierrez (.351 average, nine RBI) and Chase Conville (.316 average, eight RBI) have been steady producers in the middle of the lineup for Sickles. [LW: No. 2]
This week: Tues, 3/30 at East Bay; Wed, 3/31 v Plant City; Sat, 4/3 at Jefferson

The Chargers avenged an earlier loss on the year by defeating Bloomingdale 5-4, but saw the week end with Leto rallying for a big district win. Crest is 1-3 over its last four, and will have another chance against Durant on Tuesday after losing to the Cougars in the Saladino semifinal two weeks back. Sophomore Arjun Nimmala has pushed his team RBI-leading total to 18, with 14 runs scored and nine doubles. [LW: No. 7]
This week: Tues, 3/30 v Durant; Thurs, 4/1 v Plant

The Bulls dropped a close one to Crest, evening the season series between the two, before defeating Freedom to round out the week. In the 6-2 win over the Pats, junior Colby Shelton hit his second home run of the season and is now hitting .457 on the year. Bloomingdale started the season 7-0, but is just 3-5 since that point and has a district showdown with East Bay on Thursday. [LW: No. 8]
This week: Tues, 3/30 at King; Thurs, 4/1 v East Bay

Hey, remember last week when we debuted Foundation Christian in our rankings for the first time ever and said they had a really, really, really … really good pitching staff? We meant to add like five more “really”’s. The Panthers outscored opponents 33-1 last week, as Caden Kull struck out 10 against Grace Christian, Shane Saunders 11 vs Bayshore, and Carson Kull 15 in a win over Leesburg First Academy. And no biggie, but the offense is averaging 10+ runs a game. [LW: No. 10]
This week: Tues, 3/30 at Zephyrhills Christian; Thurs, 4/1 v Lakeland Victory Christian

Senior Joey Jensen’s 12 strikeout no-hitter against Bradenton Christian kicked off a superb week on the mound for the Crusaders, as SCA’s hurlers Ben Cheek held Lecanto Seven Rivers to just one hit in a five-inning win, and Dylan Cheeley kept Northside Christian off the board, with just three hits allowed in a complete-game effort to cap a three-win, three-shutout week. [LW: No. 11]
This week: Tues, 3/30 at Tampa Prep; Thurs, 4/1 at Bell Creek